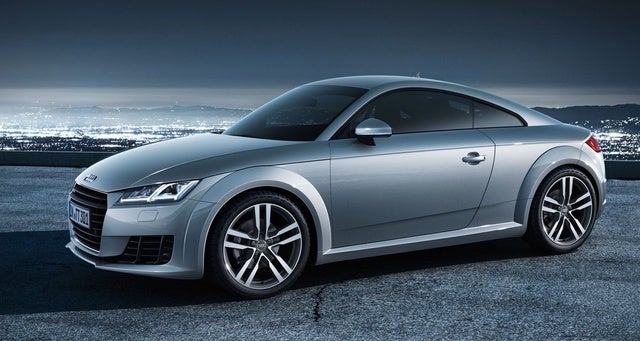 You can often tell a lot about the purpose of an object simply by its appearance. From the raked rear window emphasizing front-seat occupancy to the wheel wells pushed out to the corners, anyone taking a single glance at the 2017 Audi TT should immediately understand its purpose: a pure driver’s car.

The Audi TT is in its third generation, dating back to a first-generation model that was a revelation when it hit the scene in 1998. Its bold, bulbous curves created an undeniable appeal, and the car was so aesthically groundbreaking it inspired the design of Kobe Bryant’s shoes at the time.

The second generation reeled things in from an avant garde standpoint but kept styling athletic and instantly recognizable. The third-generation TT, which arrived for 2016 and carries over to 2017, continues that design ethos. The LED headlights are sharply angled, framing the massive Singleframe grille–a design element that has been so influential many other automakers have adopted variations on it.

Coupe and Roadster versions of the TT are available; the Coupe has 4-passenger seating, while the Roadster loses the rear seat in favor of a power-folding top that opens or closes in just 10 seconds at speeds of up to 31 mph. Both Coupe and Roadster come in a single trim and stand out with LED taillights with dynamic turn signals, heated side mirrors, a bright dual exhaust, and an adjustable rear spoiler. The spoiler stays nestled in the rear lip until the TT reaches 75 mph, at which point it deploys to improve downforce. The TT also comes standard with Audi advanced key, which includes remote start, stop, and entry.

Under the curving front hood of the TT is a 2.0-liter turbocharged inline 4-cylinder engine that consumes premium fuel. It makes 220 hp and 258 lb-ft of torque. Power is sent through a 6-speed S-tronic dual-clutch transmission, with a tap-shift function and steering-wheel-mounted paddle shifters, to Audi’s famed quattro all-wheel-drive system.

You can tailor your drive experience personally with Audi Drive Select. This system modifies the throttle response, shift points, steering feel, and quattro settings to optimize performance in Efficiency, Comfort, Auto, Dynamic, or Individual drive modes (Individual allows the driver to personalize any of the vehicle dynamics listed). Audi estimates you can punch the TT from 0 to 60 mph in just 5.3 seconds, on the way to a top speed electronically limited to 130 mph.

The TT has a front MacPherson strut suspension and rear 4-link suspension. Riding on such a short wheelbase, it will deliver an impressive sports-car driving experience, where a turn of the wheel will result in an immediate corner-carving response.

In the 4-passenger cabin you’ll find standard leather and Alcantara surfaces accented with LED ambient interior lighting. Heated front seats, automatic climate control, and 50/50 split-folding rear seatbacks round out the cabin basics. But anyone stepping into a TT for the first time will be immediately drawn to the innovative Virtual Cockpit layout. Virtual Cockpit is a rethinking of the instrument panel, with a 12.3-inch digital screen that can transition from a more traditional gauge cluster to a customizable layout prioritizing different information based on driver settings and conditions.

You can further enhance the Virtual Cockpit system with available Audi Connect. This optional functionality bakes in Google Earth with 3D satellite imagery and even a Wi-Fi hotspot with 4G LTE capability. With this system, you can connect up to 8 devices for Twitter integration, local traffic, weather, news, and more.

Audi Multimedia Interface, or MMI, is the cornerstone of Audi connectivity. The standard MMI Touch controller in the center console includes basic toggles and an intuitive dial. The top of the dial has a touch-sensitive pad that allows you to “draw” letters on it, entering navigation, audio, and phone inputs without having to clumsily rifle through so many menus. MMI provides standard Bluetooth connectivity with hands-free calling and streaming audio from your paired smartphone. If you plug your iPhone or Android phone into the Audi smartphone interface, you can also access Apple CarPlay and Android Auto. These systems allow a wealth of smartphone functionality in the TT, including text-message reception and voice-controlled response composition, navigation, and apps like Podcasts, Pandora, and Spotify.

The TT comes with standard dual-stage front- and side-impact airbags, “Sideguard” head side-curtain airbags, electronic stability control, a tire-pressure monitoring system, and a rear-view camera. Other safety systems include blind-spot warning and Audi Parking System Plus, which is comprised of front and rear parking sensors.

The TT has the distinctive look of a sports car–there's no denying that. But being an Audi, it's never as simple as performance alone. The 2017 Audi TT is an artful blend of driving excitement and cutting-edge technology for those who want to get the most out of their time behind the wheel.