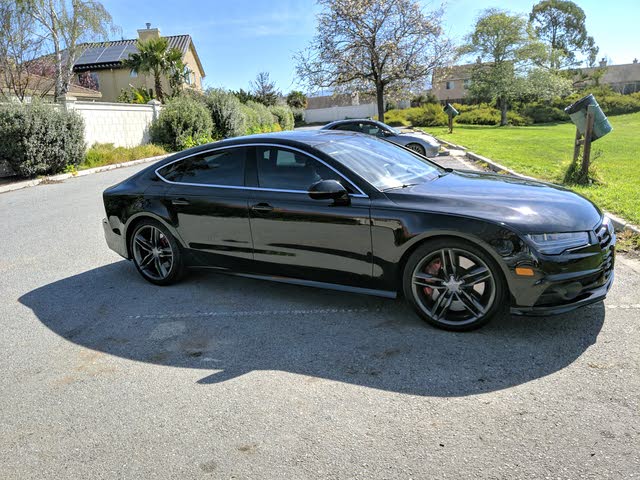 The Audi S7 is in a funny position, essentially being the middle child of an altogether extraordinary group of siblings. This “lineup” begins with the A7, the junior in terms of both performance and price but extremely well-regarded nevertheless. Every Audi “A” sedan has a more powerful “S” sibling, of course, and the S7 takes the A7’s looks and adds a whole lot of horsepower and torque. But even the S7 defers to the RS 7, the older brother with a base trim that costs well over six figures. And yet the S7 is arguably the best of the three, adding to what’s great about the A7 without making you feel like you’re bordering on supercar territory (until 2015, Audi was offering a V8 version of its top R8 model for a little under $10,000 more than the $100k+ RS 7).

The 2016 S7 received significant updates to both design and drivetrain. So overall changes to the model for 2017 are limited. There will be two trims this year, however, with a new Premium Plus starting just under $80,000. The Prestige trim takes over from the single 2016 S7 trim (the 4.0T quattro) and starts at $82,900. A few new design options are available, including 20-inch S-design wheels, 21-inch titanium wheels (with the Black Optic package), and red brake calipers (with the S7 Sport package). The Black Optic package mostly features dark trim accents, but the S7 Sport package adds a sport rear differential and Audi’s dynamic steering system—for enhanced handling—along with a sport exhaust.

Under the hood is a 4.0-liter V8 with turbocharged direct-injection technology that boosts its performance while attempting to maintain a semblance of decent fuel economy—the 2017 S7 is rated at 17 mpg city/27 highway/21 combined. But we’re concerned with performance here. The TFSI (turbo fuel stratified injection) V8 puts out a sizable 450 hp and 406 lb-ft of torque, mated to an “S tronic q” 7-speed dual-clutch automatic transmission. Audi’s proprietary quattro all-wheel-drive (AWD) system comes standard on both S7 trims. Overall, the setup is good for a 3.9-second run from 0 to 60 mph, which is pretty freaking fast for a 4-door hatchback.

Inside, the S7 offers the clean and sophisticated interior of the A7, as well as all the technology options. You can select ventilated and massaging front seats; you can fit the lower doors with an LED light that displays “quattro” or the Audi ring logo; you can get carbon fiber, wood, or even Valcona leather with diamond stitching. Audi’s MMI (multimedia interface) infotainment system comes standard, with a processor and display screen that both received updates in 2016, improving on technology that was already known for its ease of use. A Bose premium audio system with 13 speakers and SiriusXM radio can DJ for you.

It’s also worth noting that the S7 has a certain element of practicality to it. It has 24.5 feet of cargo space easily accessed through the rear hatch—and this is the same rear end that's noted for its graceful styling. It’s surely a better way of incorporating form and function than the “touring deck” you’ll find on a model like the McLaren 570GT, which is even more of a supercar than the R8 but still wants to suggest it can be used for something other than just driving.

And safety, you ask? Well, there’s a driver-assistance package you should probably choose. It will equip the vehicle with a corner-view camera (a rear-view monitor is already standard), lane-change assist, adaptive cruise control, a forward-collision warning and prevention system, and high-beam assistance. The S7 hasn’t been crash tested, and neither has the A7. Or the RS 7, of course. They’re all premium cars, and chances are you won’t be buying them as super-safe family haulers. But the similar 2016 A6 sedan received top marks from the insurance Institute for Highway Safety, including the important Top Safety Pick+ rating.

Genobigmac asked a 2017 Audi S7 4.0T quattro Premium Plus AWD General question about a year ago

Does The Dealer Have To Honor The Advertised Price