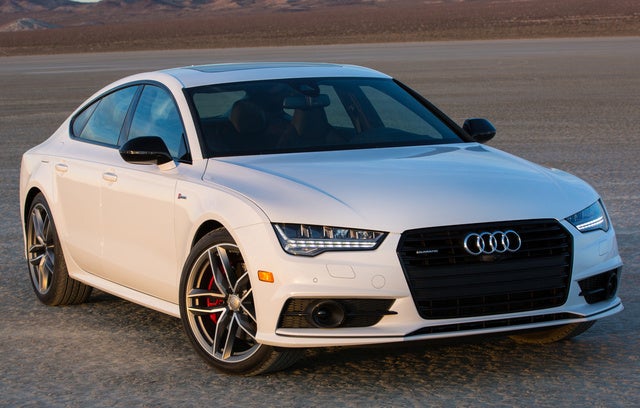 Fastback: a sloping rear roofline that has graced various car models since the 1930s, when designers first thought of taming the boxy and non-aerodynamic rear ends then dominating the auto market. Think of the sharp rear profiles on coupes or super-sporty SUVs like the BMW X6. Audi has its own version of the fastback concept, called “Sportback,” which the company introduced at the 2009 North American International Auto Show in Detroit as a hatchback alternative to its Avant wagons. “Sportback” can mean different things to different models, however, as you can see when you compare the new A3 Sportback with Audi’s 2017 A7: the A3 is still more of a station wagon, while the A7 is more a coupe in 4-door form, an appearance feature Audi has wrung out pretty thoroughly for marketing purposes. First available for the 2012 model year, the 2017 A7 remains largely the same after having received a mid-cycle update for 2016.

The A7 gets a lot of praise for its looks. Its elegantly sloping roofline is certainly a viable choice for someone who doesn’t want to feel stuck in a more traditional (and often less “cool”) sedan body style—the A7 is actually based on the A6 sedan, a solid performer in the Audi lineup. Instead of a trunk, the A7 has a long rear hatch. The interior fits 5 passengers, but the roofline might make headroom a little cramped for taller folks riding in the back. Overall, the A7 is a fairly big car. Though the TDI trims have disappeared in the wake of parent company Volkswagen’s egregious diesel emissions violations, you can still get the A7 in quattro Premium Plus or quattro Prestige trims, the latter of which adds standard features like ventilated seats and a head-up display. There’s also a 4-passenger Competition Prestige trim, which pulls a few more horsepower out of the same engine.

And what engine is that? The 2017 A7 keeps 2016’s supercharged 3.0-liter V6, producing 333 hp or 325 lb-ft of torque. An 8-speed automatic sourced from ZF directs power to all four wheels with Audi’s proprietary quattro all-wheel-drive system. The Competition Prestige nudges horsepower up to 340. The 2016 A7 goes from 0 to 60 mph in 4.7 seconds and has a limited top speed of 130 mph. Despite the car’s weight—4,324 pounds in 2016—many consider it to be an exceptional performer. Its looks and driving dynamics actually make it a good alternative to competing models like the BMW 6 Series, which starts around $10k more than the A7. Fuel economy is tolerable for a heavy-ish vehicle with this kind of performance, with 2016 EPA-estimated mileage checking in at 20 mpg city/30 highway/24 combined.

If your primary concern is having everyone know you’re driving a 2017 A7 rather than a 2016, you’re in luck. You can order your A7 in Matador Red, Gotland Green, or Java Brown, all newly available to the lineup for 2017, along with three new wheel designs. Inside, you’ll find new LED lighting and the option of new Aluminum Ellipse silver or fine-grain birch natural agate gray trim inlays. Like other Audis, the A7 has always offered the kind of tastefully slick cabin that will make pretty much anyone, driver or passenger alike, feel sophisticated—if not necessarily hip.

In what almost seems like a belated addition, the 2017 A7 will finally get Apple CarPlay and Android Auto smartphone capability, routed through the MMI (multimedia interface) monitor rising from the center of the dash. An “Audi phone box” also now offers inductive charging for Qi-capable phones. Two tablets are available for rear-seat entertainment and can even be operated away from the car itself. A 1,300-watt Bang & Olufsen advanced sound system is available in Prestige and Competition Prestige trims, with 15 speakers and Dolby Digital 5.1 Surround Sound. There are a couple of comfort-oriented option packages, and an available S Line Sport Package adds trim and appearance features, a sport suspension, and special wheels.

The A7 has not been, and probably will not ever be, crash tested; neither the National Highway Traffic Safety Administration nor the Insurance Institute for Highway Safety is going to bother with a premium vehicle such as this. Audi does, however, offer a Driver Assistance Package with up-to-date safety systems like adaptive cruise control, lane-change assist, forward-collision prevention, and a front and rear corner-view camera system (a rear-view camera comes standard). You can also expect the standard run of safety features like front, front-knee, front-side, and front and rear side curtain airbags, parking sensors, and 4-wheel antilock brakes.

Audi has not announced U.S. pricing for the A7 as of this writing. But even the “base” 2016 Premium Plus started at almost $70,000, so don’t expect this sort of style and performance to come cheap. As with similar models from BMW, Mercedes-Benz, or even Porsche, great German auto engineering usually demands a premium price.

Users ranked 2017 Audi A7 against other cars which they drove/owned. Each ranking was based on 9 categories. Here is the summary of top rankings.

Can I Search A 250 Mile Area From Los Angeles