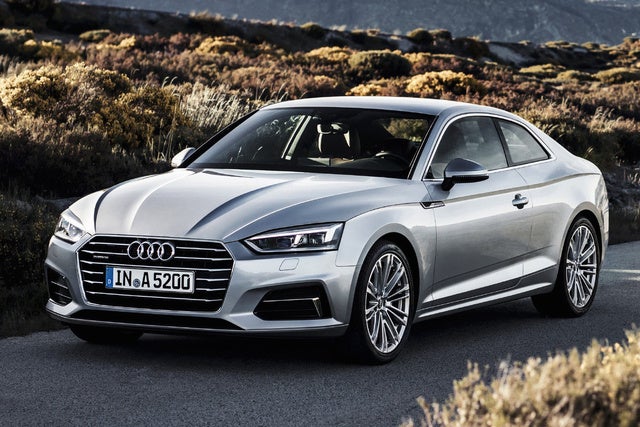 The Audi A5 was first introduced for 2007 as a 2-door companion to the popular A4 sedan and has since become one of the company’s more popular and respected models. The A5 Coupe and Cabriolet are due for a total redesign for the 2018 model year, but Audi is keeping the current generation relevant despite the relatively old age of its design. Based on the previous-generation A4 sedan platform, the current A5 incorporates a slimmer grille frame and headlights and adds a number of interior options for 2017 to keep it competitive with other 2-door luxury cars like the Cadillac ATS, BMW 4 Series, Mercedes-Benz C-Class and Lexus RC. For the driver who wants a little more grunt from the A5, the supercharged V6 S5 and beastly V8 RS5 models are also available.

Powering the regular A5 Coupe and Cabriolet is a 2.0-liter turbocharged four making 220 hp. That’s not exactly a lot for a big, comfortable car with sedan underpinnings, but the hefty 258 lb-ft of torque and all-wheel drive (AWD) ensure the A5 is more than quick enough to satisfy most drivers. Coupes get a choice of a 6-speed manual or an 8-speed automatic, while the Cabriolet is only available with the auto. All A5s come standard with quattro AWD. The run from 0-60 comes in 6.6 seconds for a Coupe with the automatic, or 6.4 seconds with the manual. A Coupe equipped with the 6-speed will do 22 mpg city/32 highway, while a Coupe with the automatic will do 21/30; the Cabriolet, which is only available with the auto, will do 21/29. As a turbocharged car, the A5 will run on premium fuel.

The A5 is intended to be a car that will comfortably do the daily grind but also be very fun to drive. An optional Drive Select system lets the driver tweak settings for the throttle, suspension, steering, and gearbox to be more or less responsive, and variable-ratio power steering comes optional as well. What driving fans will really want, though, is the optional sport suspension, which is stiffer than on the standard car. Anyone who takes their driving really seriously will probably be more interested in the S5, which in addition to more power has a sportier ride.

The inside of the A5 has been traditionally characterized by a somewhat understated look that still has undeniable fit, finish, and material quality. New interior trim choices include carbon fiber, stainless steel, and wood. Dual-zone climate control comes standard, and luxury options include a Bang & Olufsen sound system and navigation bundled with a rear-view camera, HD Radio, a DVD player, and new Google Earth maps. The Cabriolet has a power soft top that raises and lowers in less than 20 seconds, and which does sacrifice both rear seat and trunk space. The back seats in an A5 are tight but still reasonably useful, and the Cabriolet has just 11.3 cubic feet of trunk space compared to 16.3 in the Coupe. Coupes are available with a panoramic sunroof, though this feature reportedly cuts down on headroom for taller drivers. While the overall design of the A5 is a bit aged, Audi has consistently updated the infotainment and other interior interfaces in order to keep them current.

The 2017 Audi A5 hasn’t been crash tested, but the A4 on which it is based has typically done well in such tests, with mostly top scores from both the National Highway Traffic Safety Administration and the Insurance Institute for Highway Safety. The car comes standard with dual front and side airbags, knee airbags, traction control, and stability control. Cars bundled with navigation get a rear-view camera and parking sensors, and the convertible is equipped with pop-up roll bars that deploy when rollover is imminent in order to protect the occupants’ heads. The 2017 A5 might be in lame-duck status as it soldiers on for another year before the redesign comes out, but it doesn’t look or feel outdated and should continue to attract the kind of buyer it always has, even if the newer BMW 4 Series is a tempting alternative. The A5 best for those who want the combination of luxury and performance that Audi does so well but like the sportier look of a coupe and don’t need the two extra doors of the A4 or the tire-shredding performance of the S5 or RS5.