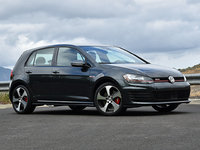 Ever wondered why people who own German cars drive the way they do? Because they can. 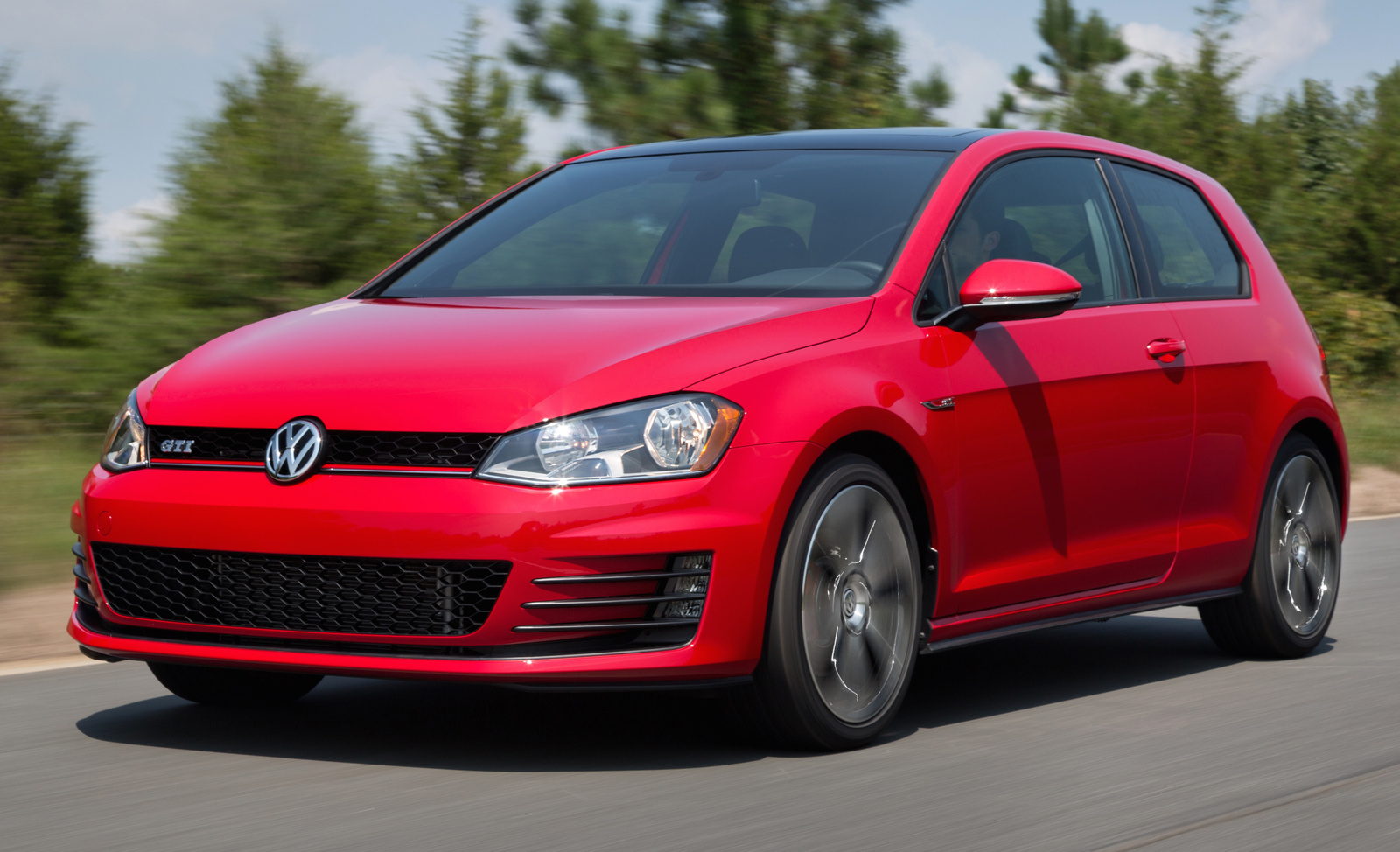 Driving is fun. You might not realize this because of the vehicles you’ve owned over the course of your lifetime, but it is true. And the 2016 Volkswagen Golf GTI is among the most entertaining rides this side of $50,000. 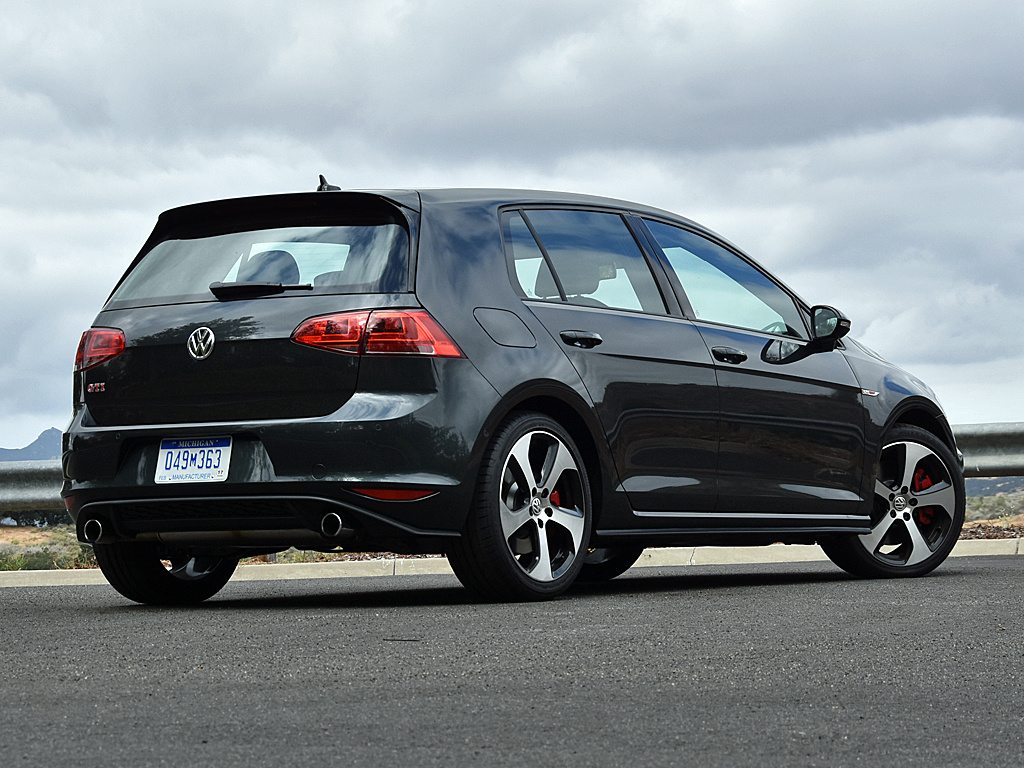 If you love to drive, but you’re on a budget or you need something more practical than a traditional sports coupe, then you absolutely must check out the 2016 Volkswagen Golf GTI. An affordable performance icon that is sheer pleasure to drive, the Golf GTI blends athleticism, refinement, comfort, practicality, safety, technology, and value in a manner unmatched by most other vehicles.

Pricing for the Golf GTI in S trim starts at $25,815, including the quite reasonable $820 destination charge. That gets you a 3-door model with a manual gearbox. Extra doors run $600, and a clutch-less transmission costs $1,100. Additional upgrades include SE or Autobahn trim, a Performance Package, a Driver Assistance Package, a Lighting Package, and a Dynamic Chassis Control system.

Before you know it, you’ve got a loaded GTI with all the trimmings, like my test car, and a window sticker reading $36,840. That’s more than the base price of the more powerful, all-wheel-drive Volkswagen Golf R, Ford Focus RS, and Subaru WRX STI models, but I didn’t hold that against the car. After all, how is one to examine all the features if one doesn’t examine the fully loaded example?

The Golf GTI might be the same as it ever was, plainly penned and painted in drab colors outside of the available Tornado Red hue, but styling has never been responsible for selling this car. Rather, the magic lies beneath this Volkswagen’s conservative surface. 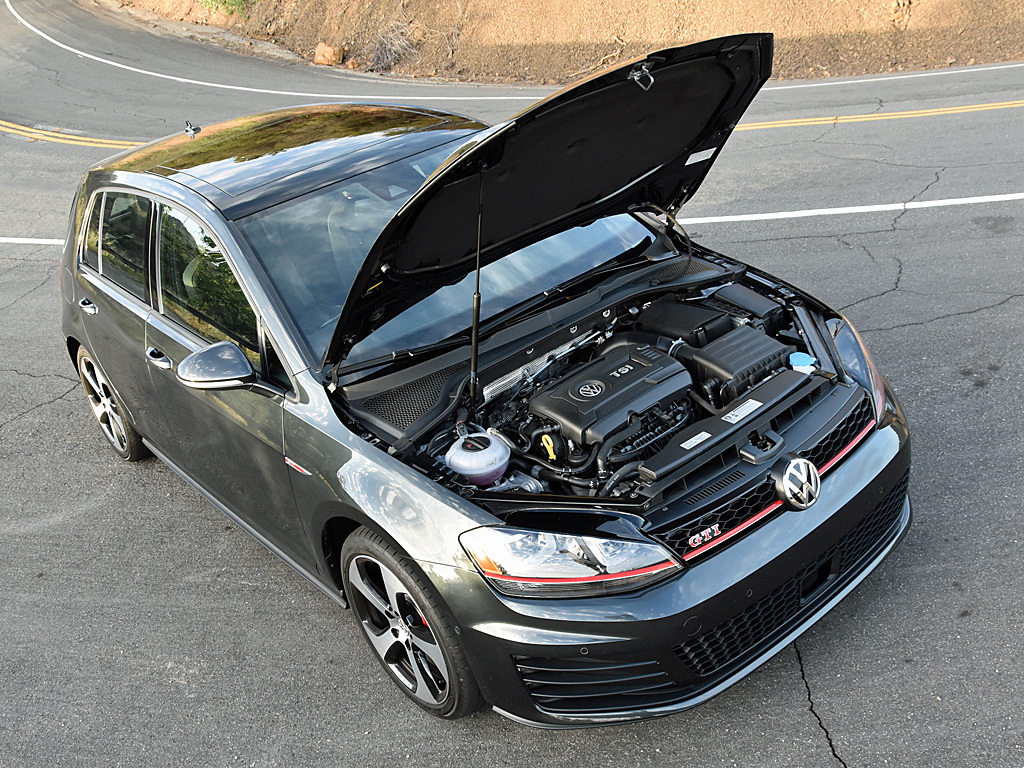 People typically focus on horsepower ratings and overlook both the amount of torque produced by an engine and where in the engine’s rev range the torque is available. In my opinion, torque is always just as important as horsepower, if not more so.

Why is that? Torque is related to the feeling of thrust that is produced by an engine, that sensation that you’re being pushed back into your seat while the car effortlessly rockets forward. If horsepower is the cake, torque is the thick layer of creamy frosting. Yum.

Driving a Volkswagen Golf GTI is akin to attending the University of Torque. Its torque peaks very low in the rev range and remains available in full force nearly to the point where peak horsepower is available. The result is acceleration best described as “whoosh,” strength and responsiveness no matter the driving situation, accompanied by what feels like a limitless appetite for speed.

In standard tune, the Golf GTI’s turbocharged 2.0-liter 4-cylinder engine makes 210 horsepower beginning at 4,500 rpm and 258 lb-ft of torque starting at just 1,500 rpm. Install the Performance Package, which adds more horsepower along with larger brakes and a limited-slip front differential, and the engine whips up 220 horses at 4,700 rpm.

Taken out of context, the Golf GTI’s numbers appear unimpressive. Remember how the horsepower and torque are spread across the rev range, though, and keep in mind that the GTI weighs just 2,972 pounds in standard trim. That makes it easier to understand how unbelievably satisfying this car is to drive.

Better yet, the driving thrills don’t exact a big penalty at the gas pump. I averaged 26.5 mpg on my standard test loop, falling short of the EPA’s estimate of 28 mpg in combined driving. The EPA’s driving cycle and conditions are different from mine, though. In other words, the EPA isn’t using the Sport driving mode and the Direct Shift Gearbox’s paddle shifters while running the car for all it’s worth across California’s Santa Monica Mountains.

Every GTI comes with Volkswagen’s XDS Cross Differential System, an electronic, brake-based technology designed to reduce understeer, which refers to the tendency for the front wheels of a front-wheel-drive car to run wide in corners. This definitely helped the car to plaster a huge grin on my face.

Every GTI also comes with Normal, Sport, and Individual driving modes, which adjust steering heft, throttle response, and in cars equipped with the Direct Shift Gearbox (DSG), shift characteristics. On top of this, my test GTI had the optional Dynamic Chassis Control adaptive suspension, which adds a Comfort mode for a smoother highway ride.

Combine these features with the DSG and its paddle shifters, as well as a set of 225/40 Bridgestone Potenza summer performance tires, and it is utterly remarkable how fast you can drive a Golf GTI down a canyon road. The progressive electric steering is fast and sharp, turning the GTI into a guided missile. The brakes, which are a little grabby when driving around town, prove utterly perfect when ripping down a favorite road. And under hard acceleration, the exhaust burps when the transmission upshifts, creating a satisfying aural confirmation that you are, indeed, hauling ass.

Ever wondered why people who own German cars drive the way they do? Because they can. 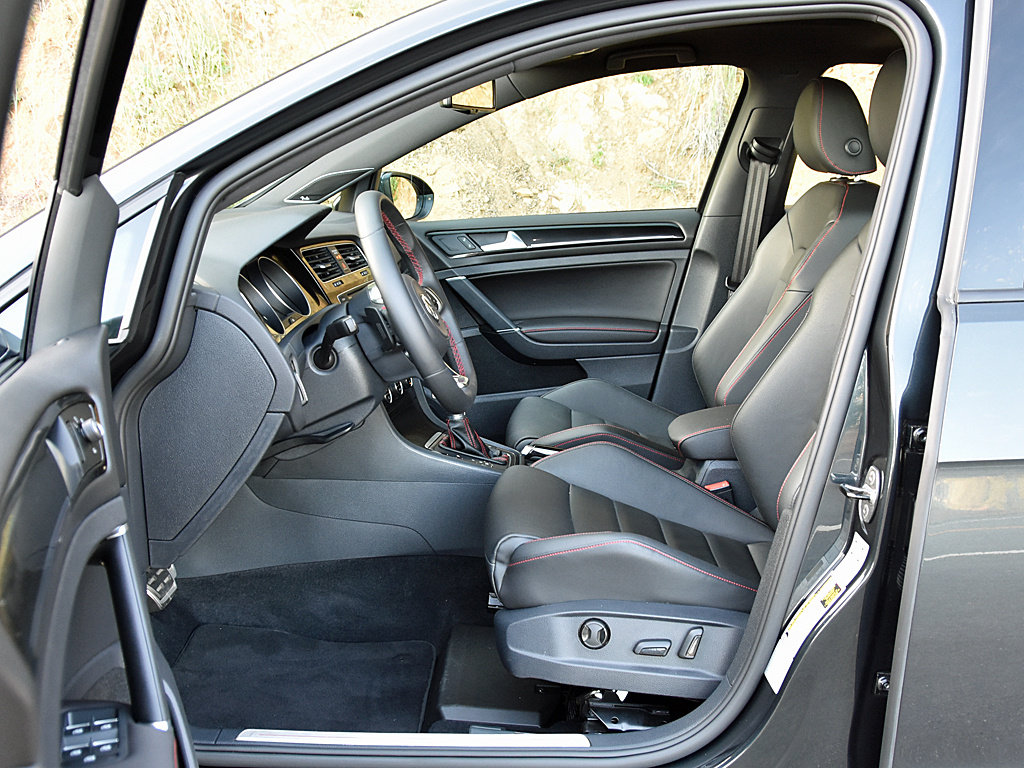 While driving enjoyment is the main reason the Volkswagen Golf GTI exists, this car does have its practical side. How could it not, given the hatchback body style?

In addition to the car’s impeccably engineered hardware, and the way Volkswagen tunes the Golf GTI to deliver pure, unadulterated driving bliss, this VeeDub is clearly designed around its driver in a function-over-form fashion.

Deeply bolstered front seats hold a body securely in place when taking corners with more speed than might be prudent, yet they’re not confining even if you’re well over a healthy weight. In combination with a racy tilt/telescopic steering wheel, they adjust to position the driver perfectly behind the steering wheel. Instrumentation is clean, legible, easy to reference with a glance, and easy to reach with a minimum of distraction.

Granted, the Golf GTI’s rear seats are a little snug, but who cares? If your passengers don’t like it, they can walk. In response to complaints, you can point out how the front seatbacks are softly padded for greater comfort to the knees and shins that will be in full contact with them, and that Volkswagen supplies air vents for the rear occupants in order to keep them cool after breaking out into a worried sweat over your driving habits.

To pop the hatch, push on the upper portion of the VW badge, and it opens to reveal what Volkswagen says is 22.8 cubic feet of cargo space. That’s more than a Ford Taurus, the vehicular equivalent of Nicki Minaj, though I don’t see how the company came up with that figure.

Therefore, the real benefit to the GTI’s hatchback design is that if you fold the rear seats, you’ve got a reported 52.7 cubic feet of cube-shaped space. 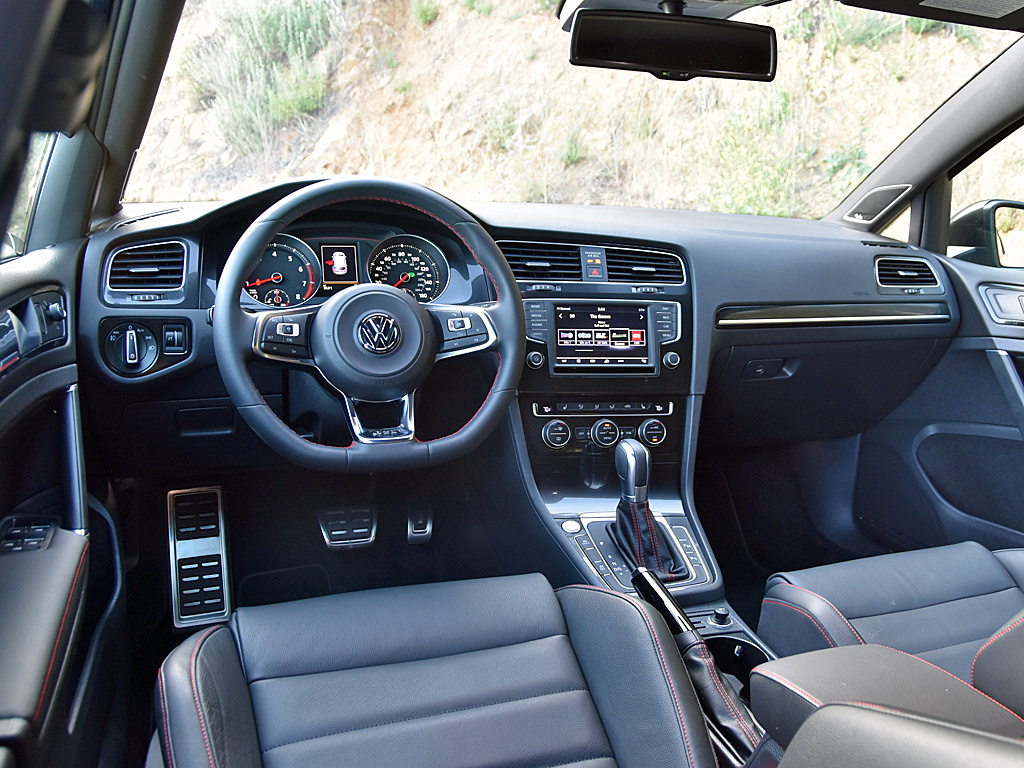 Volkswagen installs a new infotainment system in the Golf GTI for 2016, one including a 6.5-inch capacitive touch display screen, useful stereo knobs for volume and tuning, and big buttons on either side of the screen for accessing main menus.

Connecting via Bluetooth or the App-Connect USB port is simple, but getting acclimated to how everything works takes some time. I strongly urge GTI buyers to take a look at Volkswagen’s tutorial videos on You Tube in order to learn more about how the new infotainment systems work.

Also, while this stuff is undeniably cool, you should not be using it while the car is moving. That’s because it still distracts focus from the task at hand, and in a GTI, while you’re driving like a bat out of hell, all of your focus must be concentrated on the road ahead and not asking Siri for directions to the nearest Starbucks. 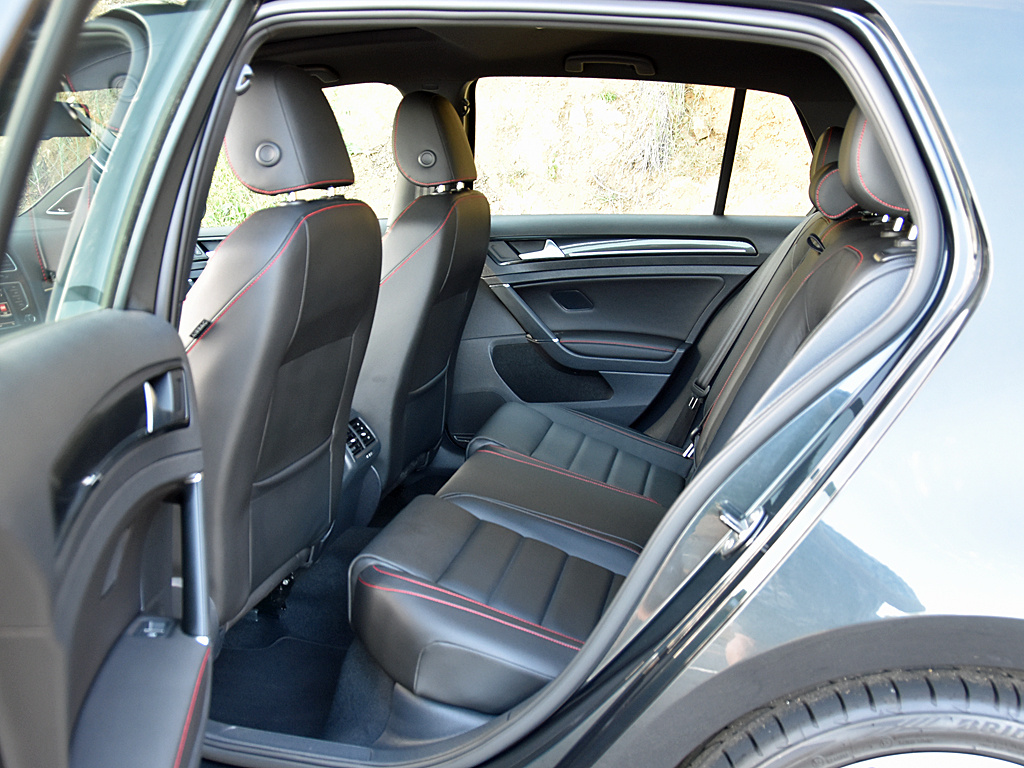 Most important, this upgrade also adds a forward-collision warning system with automatic emergency braking. Least important, it adds a Park Assist system that will steer the GTI into a space while you operate the pedals and transmission. Yeah, umm, if you buy a GTI and then actually use this technology, you probably need to give up your driving-club membership.

Automatic post-collision braking is standard for every 2016 Golf GTI and is designed to bring the car to a halt just as soon as is possible following a collision. The idea is that the system will help prevent secondary collisions after the airbags have already activated and the car’s structure has absorbed an impact.

Speaking of structural safety, the GTI gets a Top Safety Pick rating from the Insurance Institute for Highway Safety and a 5-star crash-test rating from the federal government. 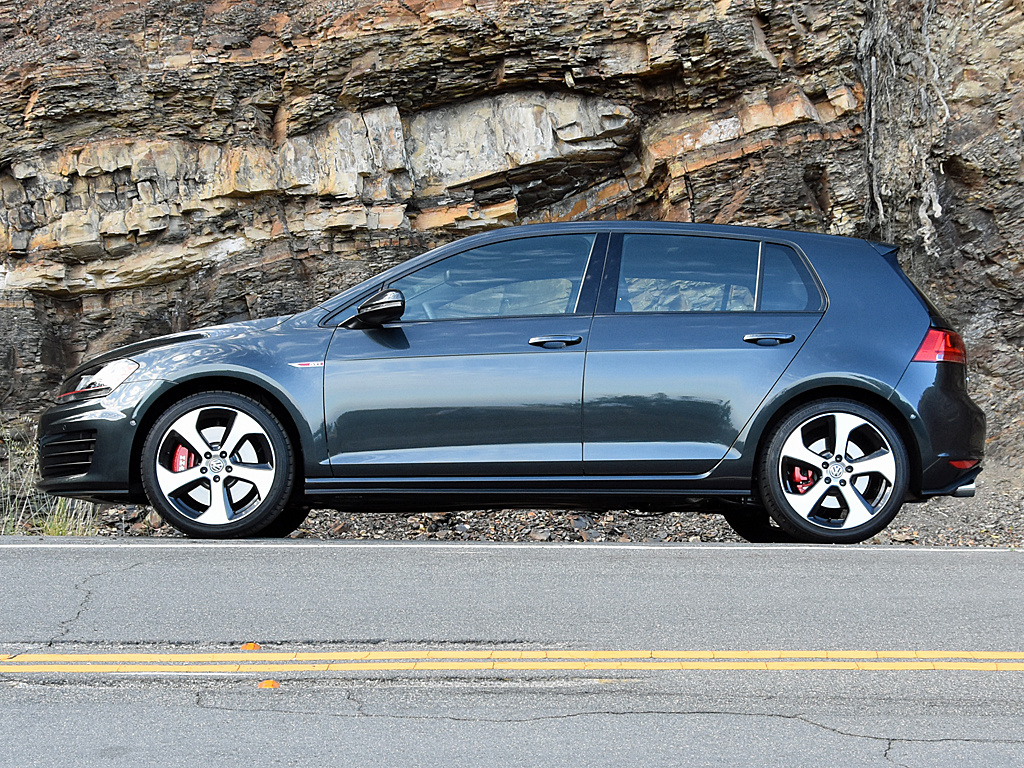 Historically, Volkswagen owners have been less than kind when it comes to rating the quality and reliability of their vehicles, which means that if you’re lucky, you’ll find the Golf GTI to deliver average levels of dependability. Couple the car’s unimpressive track record in this regard with the discontinuation of Volkswagen’s free scheduled service program, and you might conclude that a GTI is a lousy value.

That’s not the case, because value can be measured in different ways. Viewed through a bang-for-the-buck lens, few automobiles can match the Golf GTI in terms of value. Add the low starting price, my 26.5-mpg average while driving the car in the manner in which God intended, the GTI’s practical hatchback body style, and its impressive safety scores, and there is an undeniably compelling value equation here.

Plus, as the big Memorial Day sales weekend approaches, Volkswagen is offering lease deals, low-interest and long-term financing rates, and special rebates to recent college graduates. You should have no problem writing a deal at or below invoice price.

If you’re looking for a car that blends daily driving enjoyment with daily driving practicality, you’ve found that and so much more in the 2016 Volkswagen Golf GTI.

What's your take on the 2016 Volkswagen Golf GTI?

Ducky51 Love my 16 GTI S manual with performance pack. Best practical sports car value. Always puts a smile on your face while getting up to 40 indicated mpg.

GuruTYHVM Rather have an R

Users ranked 2016 Volkswagen Golf GTI against other cars which they drove/owned. Each ranking was based on 9 categories. Here is the summary of top rankings.

Have you driven a 2016 Volkswagen Golf GTI?
Rank This Car

Losing Acceleration After 1/2 Tank Of Gas

Just purchased a 2016 GTI 2months ago in Early December. A Tuner was already installed on the vehicle. Car has never been under 1/2 tank of gas since I bought it. Driving down the interstate, after ...

Why Are So Many Cars Have Mis-labeled Trim Levels? I.e. GTI S V. GTI Autob...