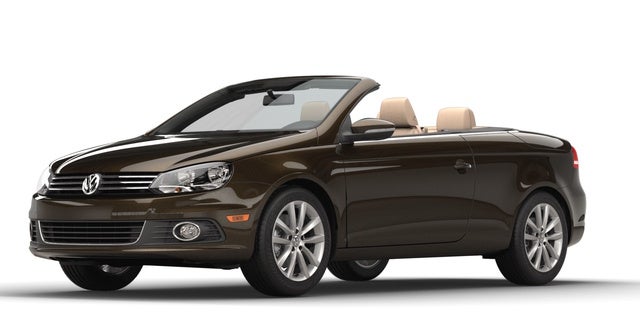 The rumored discontinuation of Volkswagen’s Eos high-end hardtop convertible after the 2015 model year was, apparently, a bit premature. Yep, the Eos is back! But for 2016, this 2-door, 4-seat drop-top is only available in the base Komfort trim, while the midlevel Final Edition and top-shelf Executive have disappeared, meaning, among other things, fewer exterior color choices. The Komfort’s 2015 features, however, carry over essentially unchanged into next year.

The media tends to regard the Eos as a niche model--and as such, it offers some unique features. Its somewhat bland profile disguises a relatively sumptuous cabin and a comparatively high-performing turbocharged powerplant. And the Eos' distinctly light-weight construction gives it some surprising blast during acceleration, with a well-wrought suspension that makes for some agile handling on curvy roads.

Unfortunately, this compact convertible doesn’t offer the value of, say, the Mazda Miata, and convertibles like the Chevy Camaro or Ford Mustang offer a bit more pizzazz for about the same price. Class-wise, the Eos fails to live up to such competitive (and pricy) vehicles as the Audi A5 convertible or the Lexus IS 250 C. But his little VW convertible offers reasonable rear-seat comfort and even a relatively spacious trunk capacity of 10.5 cubic feet with the top up. The trunk liner can also be removed for extra toting space, should the need arise.

The Eos Komfort offers a 2.0-liter turbocharged inline 4-cylinder (I4) powerplant that will put out 200 hp and 207 lb-ft of torque, paired with a standard 6-speed auto-manual transmission (which VW calls the DSG) that features a driver-selectable Sport Mode for a little extra kick in the commute. Mileage remains an acceptable 22 mpg city/30 highway/25 combined, and VW claims a 0-60 time of 7.3 seconds.

Technology in the 2016 Eos Komfort includes Volkswagen's Car-Net telematics, with voice-directions integrated into the standard GPS navigation system. Unfortunately, in what seems a distinct indicator of impending doom, VW’s upgraded MIB 2 apps and WiFi hotspot technology is not indicated for the 2016 Eos iteration. Entertainment remains a 6-CD changer complemented by 8 speakers, satellite radio, and an auxiliary audio input.

As for options, the 2016 Eos Komfort remains eligible for a lip spoiler and splash guards, as well as a roadside assistance kit and a first aid kit. VW’s Park Distance Control, boasting front and rear parking sensors, and the Technology package, with its upgraded cabin illumination, each remain available for the upcoming model year as well.

The 2016 VW Eos, in its sole Komfort trim, is in dealer showrooms right now.

What's your take on the 2016 Volkswagen Eos?

Have you driven a 2016 Volkswagen Eos?
Rank This Car