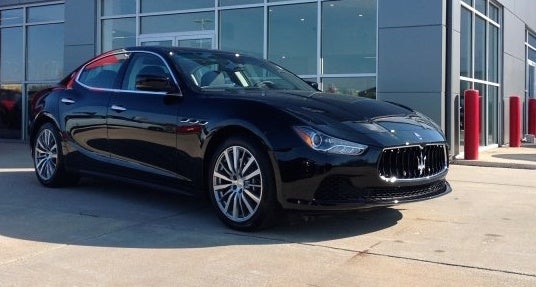 Average user score
3.5 ⁄ 5 stars
Based on 4 reviews
Review by Guru7JC2T — Beautiful car... excellent handling... glad I purchased it Read more
Review by Nicecar24 — The car was in good condition but too expensive I saw others with less miles same year for 5 or 6k less Read more 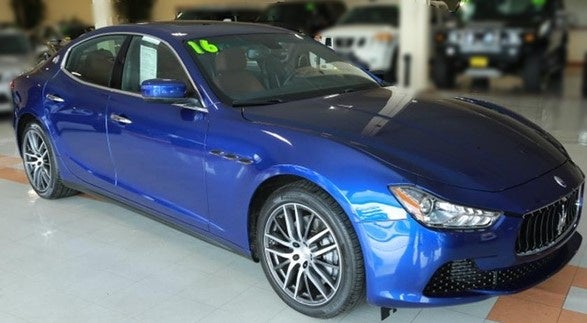 The original Maserati Ghibli was a svelte V8 GT car introduced in 1967, compared favorably in both looks and performance with the Ferrari Daytona, and best suited to high-speed trips across Europe or cruising through the French Riviera. Maserati then revived the name in the 1990s for a turbocharged, V6-powered coupe that was sporty but lacked the grace and the grandeur of the original. The Ghibli of the twenty-first century, first introduced for the 2014 model year, is an entirely different story. A 4-door luxury sedan, it serves as Maserati’s entry-level model and competes with cars like the BMW 5-Series, Jaguar XF, and Audi A6. Some Maserati purists have criticized its styling and its number of cylinders, but cars that are unpopular with purists tend to be popular with the masses, and the new Ghibli has been a good seller for Maserati since its debut, helping the brand expand worldwide.

Although it’s meant to be a more attainable alternative to the Quattroporte, the Ghibli actually shares quite a bit with that car, including the chassis, suspension parts, and engine. It’s still distinct enough, however, to be immediately recognizable as a separate model both from the outside and from behind the wheel. The Ghibli's wheelbase is almost 7 inches shorter (its overall length over 11 inches shorter), it weighs 110 pounds less, and is meant be more of a driver’s car than the Quattroporte, which is luxurious and business-like.

New for 2016 is a Ghibli S trim that slots between the base trim and the range-topping Ghibli S Q4, which is equipped with all-wheel drive (AWD). The new Ghibli S is essentially a rear-wheel-drive (RWD) version of the Ghibli S Q4, meaning it gets the same engine. Convenience features have been added for 2016 as well, including an engine stop/start function, blind spot and rear cross path alert, and a power trunk. The 2016 Maserati Ghibli starts at $70,600 for the base model, while the top of the line S Q4 starts at $78,550.

Powering the Ghibli is a 3.0-liter twin-turbo V6 that in the base car makes 345 hp and is mated to an 8-speed automatic transmission with paddle shifters. The Ghibli S and Ghibli S Q4 get a Ferrari-tuned version of the motor that makes 404 hp, a huge jump in power. The S and S Q4 go from 0 to 60 mph in around 5 seconds and have a top speed of 177 mph. 2016 sees no actual change the Ghibli's performance, but Maserati is claiming a 12 percent reduction in fuel consumption and emissions. Those who put down the extra few grand for a Ghibli S will also get a sports exhaust, a limited-slip differential and Maserati’s “Skyhook” variable dampers. Maserati’s AWD system was added to the S Q4 last year, and the AWD trim gains about 100 pounds in weight.

Three selectable driving modes (Economy, Normal and Sport) adjust throttle response and suspension settings, and the Ghibli has been praised as having exceptional roadholding and balance for a 4-door sedan that weighs 4,100 pounds--in part thanks to its double wishbone front suspension and 5-link rear suspension.

Any new Ghibli has a premium, luxury Italian feel to it on the inside. As always, though, the more you spend, the more you get. Maserati has continued its partnership with Italian fashion house Ermenegildo Zegna for the 2016 Ghibli, meaning you'll find materials such as anthracite-colored silk and either red, natural or black leather gracing the interior. Premium interior choices that are available on the regular cars include open-pore wood and aluminum--although there are some plastic-y switches and buttons as well. The infotainment system is centered on the Maserati Touch Control screen in the middle of the dash. Higher trim levels get WiFi, better stereos have been added this year, and parking is made easier thanks to a reverse camera. The Ghibli's interior has been criticized for having less back-seat space than some of its competitors, but rear passengers might very well forgive the cramped legroom when they hear that twin-turbo V6’s raspy exhaust note.

The 2015 Ghibli has already recieved top Good scores on all tests conducted by the Insurance Institute of Highway Safety (IIHS), and the 2016 model adds rear cross traffic alert and blind spot monitoring to its roster of safety equipment. As a two-year old model, the Ghibli only gets the basic necessary updates this time around--but it has gained Maserati a lot of customers and visibility, and laid the groundwork for the company’s upcoming Levante, their first SUV and the third vehicle to share the basic architecture already used by the Ghibli and Quattroporte.

What's your take on the 2016 Maserati Ghibli?

Have you driven a 2016 Maserati Ghibli?
Rank This Car