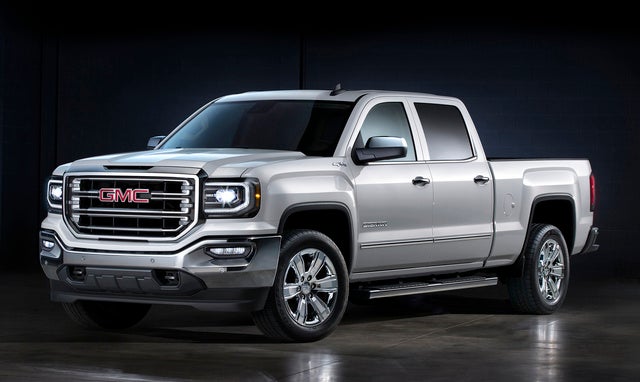 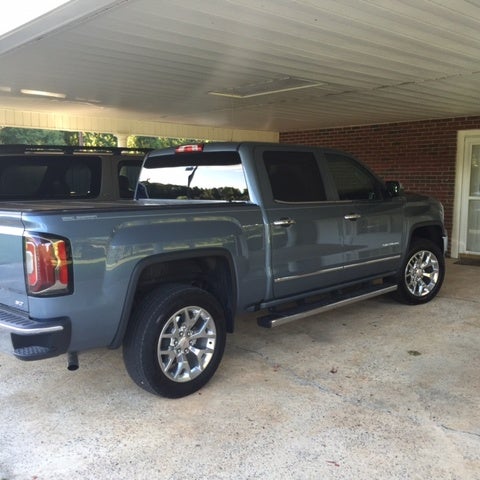 The half-ton pickup truck is easily one of the most popular vehicles here in the U.S., and GMC’s 2016 Sierra 1500 lineup certainly does the segment proud. Again offered with a handsome profile and a choice of 3 powerplants, this medium-duty workhorse also continues to offer standard rear-wheel drive (RWD) and an optional 4-wheel-drive (4WD) configuration that includes a 2-speed transfer case and auto-locking hubs.

The Sierra 1500's usual 4 trim levels return for 2016, including the entry-level Base, the up-featured SLE, the SLT, and the top-shelf Denali. The Base and SLE trim levels are available in all 3 cab choices (2-door Regular Cab, 4-door Double Cab, and the expanded 4-door Crew Cab), while the SLT is available as a Double Cab or Crew Cab, and the flagship Denali as a Crew Cab only. There is also a small choice in bed length: a 6.6-foot bed comes standard with all cabs, an 8-foot bed is available with a Regular Cab, and a shorter 5.8-foot bed is available with Crew Cabs.

The 2016 Sierra 1500 also shares a few upgrades with its Chevy Silverado 1500 cousin, including new LED headlights, fog lights, and taillights, a slightly larger grille, and a few tweaks to the front fascia and the rear bumper--a few reviewers have pointed out that the Sierra’s styling improvements are a bit more subtle than those of the Silverado. Also expected to debut in the 2016 Sierra/Silverado are a couple of tweaks to GM’s OnStar/IntelliLink infotainment system, including Apple CarPlay apps and Android Auto smartphone functions. An 8-speed shiftable automatic transmission that’s currently available on upper Sierra 1500 trims may see wider availability as well.

Look for a 4.3-liter Flex-Fuel V6 engine to return standard aboard the 2016 Sierra 1500 Base and SLE trim levels, mated with a 6-speed shiftable automatic transmission and producing 285 hp and 305 lb-ft of torque. Mileage for the V6 is again estimated at 18 mpg city/24 highway/20 combined with RWD and 17/22/19 with 4WD, and max towing capacity is rated at 7,200 pounds when properly equipped.

Complementing the new styling tweaks in the 2016 Sierra 1500 are 17-, 18-, and 20-inch steel or alloy wheels, power-adjustable and power-folding outside mirrors, an “E-Z-lift” tailgate, side-steps, and an LED cargo box light. Both the SLT and Denali again sport a standard trailer hitch and wiring, and the flagship Denali features a locking rear differential and GM’s touted Magnetic Ride Control with adaptive suspension dampers.

Options for the Sierra 1500 include the off-road-ready Z71 package, featuring a beefed-up suspension, a heavy-duty air filter, descent control, and skid plates, along with various rear axle ratios, an integrated trailer brake controller, a power sunroof, and rear-seat Blu-ray/DVD entertainment.

The 2016 Sierra 1500, which consistently gathers kudos for its performance, ride comfort, and features, will once again challenge Ford’s all-aluminum-body F-150, Ram’s 1500 (which offers a turbodiesel powerplant), and Toyota’s Tundra, which features the much-lauded TRD off-road package.

Users ranked 2016 GMC Sierra 1500 against other cars which they drove/owned. Each ranking was based on 9 categories. Here is the summary of top rankings.

GM specifies semi synthetic oil. Can I use full synthetic? It's a 5.3 engine.

We purchased a GMC Sierra 1500 in June 2016, brand new. It is Apr 2020 and the starter has gone out so the service person said. The reason we took the truck in was because the truck would not start. I...

Engine light came on and got onstar message to check engine and transmission within 7 days. No code number given and no obvious problem noticed. Just turned 40,000 miles

540 views with 2 answers (last answer about a year ago)

Recently took truck to dealership due to engine noise. They found shavings over several bearings and are recommending engine replacement. Does that seem reasonable. What should I expect to spend fo...

583 views with 2 answers (last answer about a year ago)

Why Are You Much Higher The My Bank On 2016 Sierra Slt Trucks?