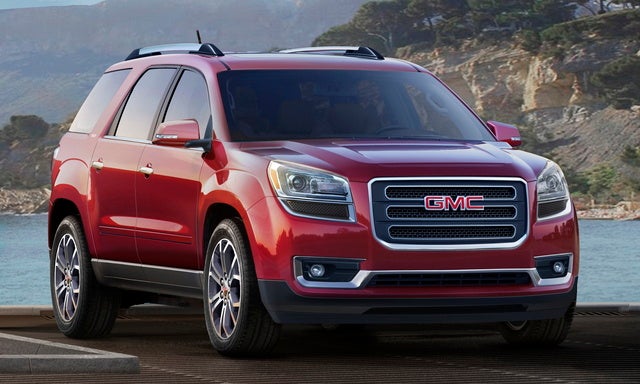 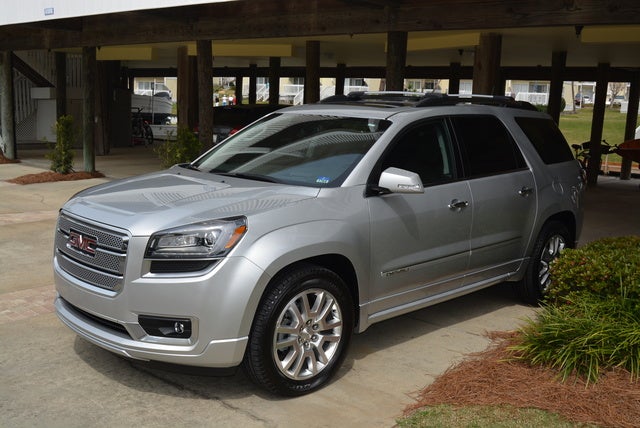 Buying the last model year of a vehicle’s design offers many benefits. Those who choose the 2016 GMC Acadia will enjoy a vehicle that has had all the glitches and bugs purged over the 9 years it's been on the market. We don’t normally mention this in previews, but the Acadia was the first crossover in GMC’s history.

Introduced as a 2007 model, and given a facelift for 2013, the model is very similar to the Chevy Traverse and Buick Enclave. The Acadia is a mid-to-full-size crossover that can seat up to 8 passengers. It can be configured as either front-wheel drive (FWD) or all-wheel drive (AWD) and has a 6-cylinder engine and 6-speed transmission.

The 2016 GMC Acadia features some notable changes. Most important will be the addition of 4G LTE connectivity. This allows passengers to enjoy a powerful Wi-Fi hotspot, but the benefits don’t end there. General Motors is rolling out proactive alerts using this high-speed communications network. According to GM, the speed of the data transfer is 100 times faster than the telematics system the optional OnStar systems used in the past. That means GMC will be able to send you a text if your tire is going flat while you're at work. That's just one easy-to-understand way this connectivity will benefit owners.

Other changes will include the deletion of Carbon Black Metallic and White Diamond Tricoat colors. Added will be up-charged Ebony Twilight Metallic and White Frost Tricoat. The SLT-1 options package will also have more features, such as rear cross-traffic alert, blind-spot alert, added power controls for the driver’s seat, and memory mirrors.

The GMC Acadia's seating can be configured two ways from the factory. The choice is between two captain’s chairs in the middle row or a bench that can seat up to 3. Thus, it's either a 7- or 8-passenger vehicle. The base version comes only with the 3-across bench, but for other trims it's optional, with the captain’s chairs being the default.

GMC offers four trim levels for the Acadia. The SLE-1 starts at about $36,000. The top of the Acadia line is the SLT-2, which has a starting price of about $45,000. It should be noted that GMC also offers a Denali series of Acadias that have a higher level of standard content, but we cover the Acadia Denali separately.

The GMC Acadia for 2016 will use one of GM’s best drivetrains. The 3.6-liter V6 makes a solid 281 hp and 261 lb-ft of torque. This engine is used widely throughout GM's lineups and is known as smooth and reliable. It's coupled to a 6-speed automatic transmission. The Acadia can tow a respectable 5,200 pounds with its available trailer package, very good for the class. AWD or FWD is available, but inventory will depend on your location, with AWD more common in colder areas.

The 2016 GMC Acadia offers an attractive and functional interior. That interior can be relatively basic in terms of creature comforts or extremely luxurious at the SLT-2 trim level.

The center console varies depending upon trim. We recently tested a GM vehicle that has the same infotainment system as the SLT trims, and we say bravo. The GMC touchscreen system is easy to use, and you will find that your phone syncs quickly. The touchscreen also removes the hassle of learning a mouse-based system, which rarely works better than this simple setup. Bluetooth is standard, of course (GMC calls it Intellilink), and even the basic audio system in the SLE-1 trim comes with SiriusXM, a 6.5-inch color touchscreen display, CD player, and a USB input.

Safety is paramount in any family vehicle. In IIHS testing, the current-generation GMC Acadia scored Good on all tests conducted. The Acadia does not offer auto-braking forward-collision mitigation, a system we feel makes sense on any vehicle, particularly at this price point. Thus, the Acadia cannot earn top marks in safety. However, the Acadia does have forward collision alert. Also, the Acadia has a much lower than average driver death rate in IIHS studies. Size matters in crashes, and the Acadia is bigger than most vehicles on the road.

The 2016 GMC Acadia offers exceptional value in a midsize to large 3-row crossover. It can be a relatively low-priced family vehicle with all-weather capability and can also be a very luxurious vehicle when the options list is fully checked. The 2016 Acadia also comes with the peace of mind of knowing that the vehicle is built on proven technology.

TheHorror Do you have four kids and a mid-life crisis? Pretend you're young and free again, with the Acadia! Acadia: strangers won't know you have a minivan!

LareeDelaroche Kyle was great at Carwise!!! Helped me out a lot

Have you driven a 2016 GMC Acadia?
Rank This Car

2nd Row Bucket For Bench Swap On The 2016 Acadia Denali

I just bought a used 2016 GMC Acadia with Denali trim, Ebony color, with bucket seats in the second row. How hard would it be to exchange the bucket seats with bench seats? And who could make the cha...

I Have No Voice Commands Coming From My Gps.

I have no voice commands coming from my gps while using it. The map is moving but no verbal commands. Is there something I can do that will solve this?

Sle Or Slt What Is The Difference

what are the major differences between SLT AND SLE

Ac Blinks But Won't Come On

Ac button light blinks and ac won't come on but when it does that the temp gauge just bottoms out and radiator fan comes on. I stop and cut car off and sit a min, and crank it back up then everyth...

When Starting The Car, The Defrost Is On. I Can Turn It Off; But It Agains...

I have only used defrost one time-one week ago. Now when I start car, defrost comes on. I have to manually turn it off, It reoccurs every engine start.