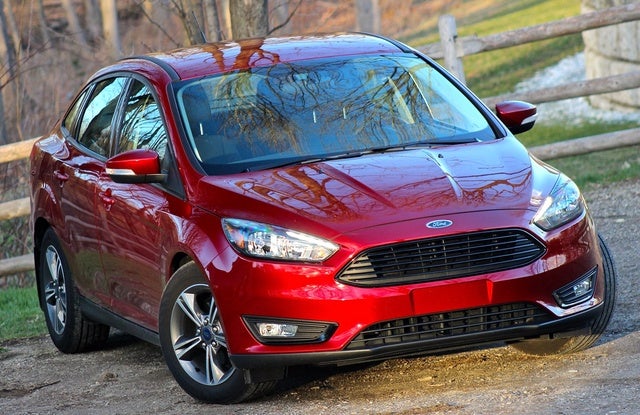 Average user score
4.2 ⁄ 5 stars
Based on 24 reviews
Review by Agl97 — Just bought this car yesterday! It runs super quiet, and shifts incredibly smoothly. Air works so well I had to turn it off for a bit because I got cold. Gearshift is a little tricky, it moves almost ... Read more
Review by Eric — Great small car, especially in hatchback form. Sporty, economical, and reliable. Read more
Review by rebirthrenewal — got mine with low miles and good price. Runs great and is gas friendly. Read more

The 2016 Ford Focus has improved in some key areas for 2016, but it’s still not perfect. It retains the title of America’s Best Small Car… for now. 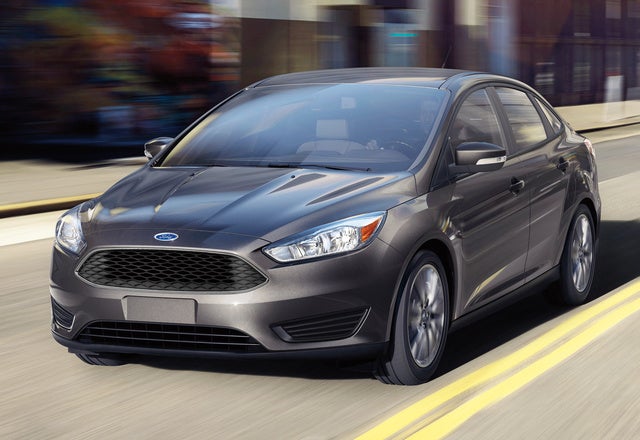 For as red-hot and competitive as the economy-car segment is, success in this corner of the market is based on some pretty mundane variables. It comes down to things like fuel economy, price, number and location of cupholders, ride quality, and other items. It basically has to be economical, reliable transportation for the everyday commute. There are other nuances, such as the ease of use of its controls, but success in this segment requires automotive pragmatism at its best.

It's through this lens that we consider the 2016 Ford Focus. This 4-door, 5-passenger small car has been refreshed for this model year, building off the success of the third-generation car, which debuted in 2011. That was the first car under the “One Ford” plan, under which one car is sold on multiple continents in multiple markets with minimal changes.

The result of the plan was a car that was much more refined than the two generations before it and positioned the Focus for the past several years as the best American Small Car. That accolade is as much about the Focus’ refinement as it is about the deficiencies of American-made competitors, including the Dodge Dart and Chevrolet Cruze. A second-generation Cruze has recently been unveiled, but it’s still too early for us to render a verdict on that car. It is import rivals, such as the Toyota Corolla, Honda Civic, and Hyundai Elantra, that pose the greatest threat to the new-look Focus. 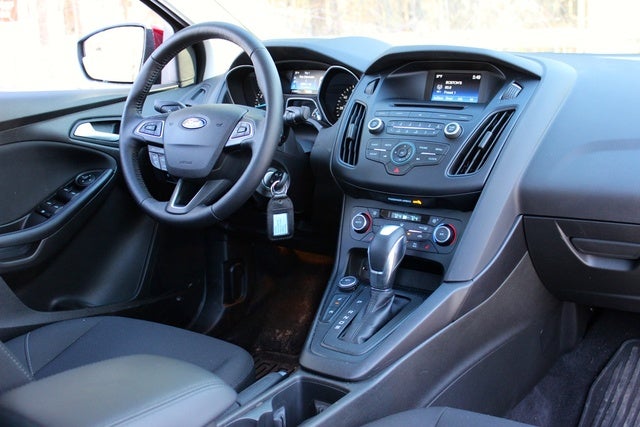 The best thing going for the 2016 Focus is its updated front end. It is the largest visual change and includes a new grille and new lower front fascia. It leaves the 2016 Focus looking like a downsized version of the larger Ford Fusion.

It's a great move for Ford, bringing the Focus into the brand’s family-style ethos. It also rids us of the front end of the 2011-2015 Focus, which was very “boy-racer.” It was meant to make every Focus look sporty, but its massive lower front grille generally made someone looking for a refined or mature small car look elsewhere.

The Focus is available as a sedan or a hatchback. We would recommend people get the Focus in hatch form. Not only is the hatchback more useful, but it looks a lot better. There’s something about modern car design that can make the rear end of small cars look super awkward as sedans. Unless you absolutely need a sedan, please go for the hatch. Your eyes will thank you.

Inside, the Focus has a refined interior that has been updated for the 2016 model year. Automakers around the industry have spent the last decade pushing the boundaries of interior design, with the result being interiors with controls that are far from intuitive. Happily, the industry trend has come back toward common-sense layouts. The Focus mercifully follows that trend, and the result is a more mature look. 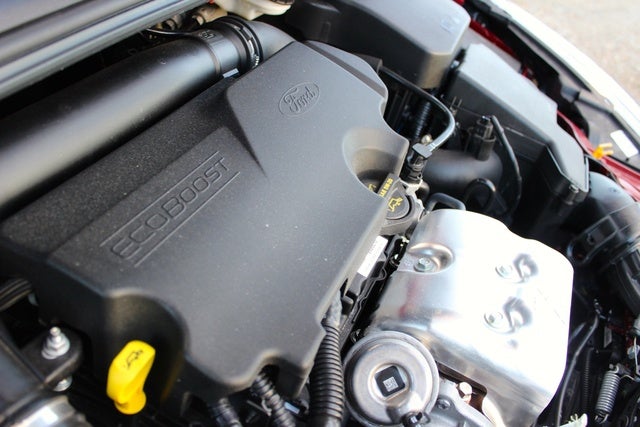 A 5-speed manual is the standard engine for the base S and SE trims. The 6-speed automatic is optional for the S and SE and standard equipment for the Titanium trim. The 1.0-liter EcoBoost comes with a 6-speed manual transmission and is available with a 6-speed automatic (as was our test car). All of these combinations send power to the front wheels.

The Focus is also available in an Electric trim, with a 76-mile range, and as the performance-oriented Focus ST, with a 6-speed manual and 252 hp on tap. The big news for performance fans, though, is the arrival of the Ford Focus RS. It features a turbocharged 2.3-liter engine with 350 horsepower sending power to full-time all-wheel-drive. That car is so different from the standard Focus, though, that we cover it as a separate model.

The most popular setup will probably be the 2-liter engine with the automatic, which returns 27 mpg city/40 highway/31 combined. Our 1-liter automatic tester returns 28/40/32 combined. To get the best fuel economy, get the 1-liter with the 6-speed manual, which tops out at an impressive 42 mpg highway.

Our 1.0-liter had surprisingly strong acceleration at lower speeds, but on the highway, we found the limits of this little engine. Engines with an odd number of cylinders sometimes have vibration issues, but Ford smoothed this out for the most part. The real issue is noise, of which the little 1.0-liter engine makes a lot.

While noise might still be an issue, ride quality in the Focus is very good. Ford says it retuned the suspension for 2016, and you can feel it when going around turns. The steering has a well-weighted and sporty feel to it, and it takes corners well. On occasion, the Focus suspension will bottom out in a pothole, but for the most part, it manages bumps in the road very well. 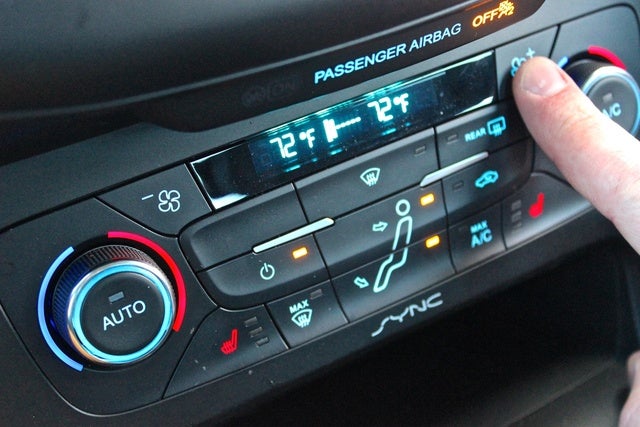 The interior layout of the Focus has been improved, but it's still far from ideal. The radio controls in our SE trim are simple enough, with basic preset buttons that you hold down to save. But the climate controls are more confusing. The fan speed controls are tucked up on either side of the climate-control display, and they are actually smaller than the buttons for lesser-used controls like the air-conditioning and defogger toggles. How hard is it for car companies to offer climate controls that are just simple dials?

The base S comes with standard features such as a 6-way manual driver’s seat, folding rear seat, and an AM/FM stereo with an auxiliary audio input jack. Move up to the SE and you get 16-inch painted aluminum wheels, the Sync voice-activated communications system, cruise control, and quad-beam automatic headlights. The range-topping Titanium boasts leather seating, a Sony 10-speaker premium audio system, heated front seats, dual-zone climate controls, and a reverse-sensing system.

One concern for carpoolers should be the back seat of the Focus sedan. If either of the front-seat passengers are of normal human height, rear-seat legroom behind that person is almost nonexistent. We're very curious as to whether the extra room of the Focus hatchback yields better second-row room. 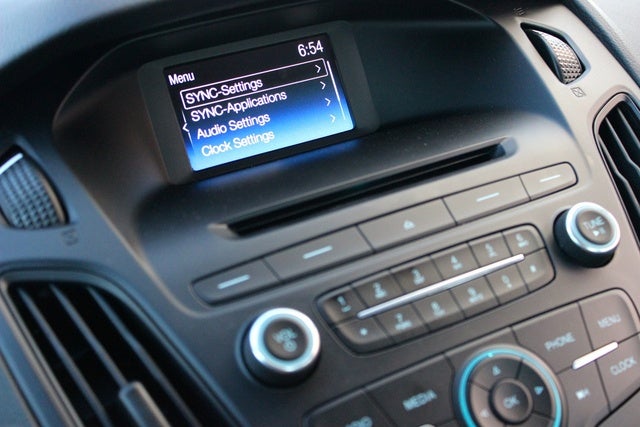 The digital screen of our SE test model was small but had vivid fonts and was easy to read, thanks in part to a large typeface. The downside was that it couldn’t present a lot of information, and thus navigating the various tiny menus wasn't easy.

Thankfully you can overcome many of the control deficiencies with Ford’s Sync system. It's a powerful voice-control system that allows you to access the stereo and a Bluetooth-paired smartphone as well as other functions. For younger drivers that often use Siri and/or Android’s voice-control functionality, they'll be right at home using Sync.

That said, the main screen should be bigger. If Ford took a page from Chevy’s book, it would make sure even models that don’t include navigation feature a large screen. 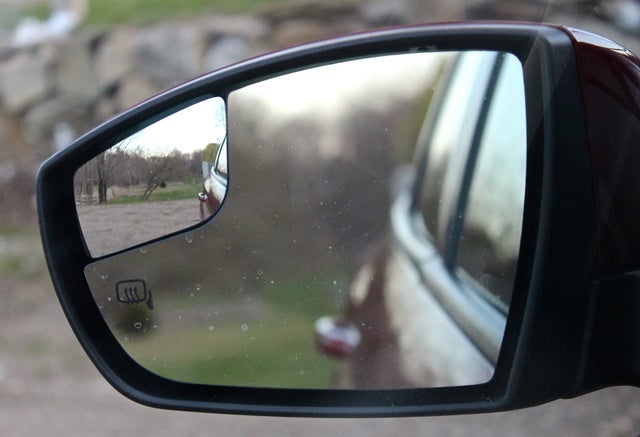 The lack of a large screen in the Focus is evident when trying to use the backup camera. Some automakers offer reversing cameras built into the rear-view mirror, and given the small size of this screen, it would work better if it were physically closer to the driver's eyes. The backup camera does include virtual guidelines that turn with the wheel, and the available parking sensors (a $255 option) are great for parallel parking.

But the best safety feature of the Ford Focus isn’t high-tech at all. It’s the side mirrors. First of all, the physical mirrors are large and give a great range of vision. They also include inset, wide-angle mirrors. You might know them as “truck mirrors” or “trailering mirrors,” but the bottom line is that they significantly reduce blind spots.

Automakers have poured R&D money into (and consumers are significantly up-charged for) high-tech blind-spot monitoring systems, but these wide-angle mirrors are a simple, elegant solution. 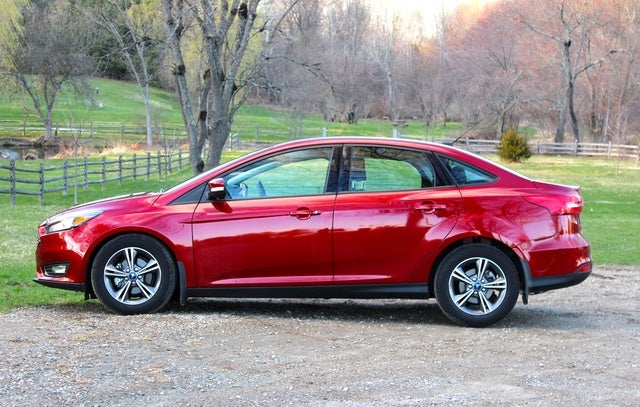 Our EcoBoost SE sedan came in at $22,995 with options. Those options include $1,095 for the 6-speed automatic transmission, $895 for the EcoBoost Appearance Package (16-inch machined aluminum wheels, LED lighting, and fog lights), and $645 for the Cold Weather Package (heated front seats, heated steering wheel, heated mirrors, and all-weather floor mats).

The Honda Civic is a more upscale car, but it's frankly more expensive at just about every corner. The Toyota Corolla is priced roughly the same, and though it feels cheaper than the Ford at times, it offers more common-sense controls and a better driving position. The Hyundai Elantra is probably a better car at a similar price, and it represents the best combination of quality and value currently available in the segment.

But if you feel the need to drive American, the Ford Focus delivers more-than-adequate daily driving. We’d recommend the SE hatchback, but either way, you’ll find the Focus livable as a daily driver and an economical choice with respectable fuel economy.

Bill The powershift tranny is the big question mark! Otherwise a great car!

Users ranked 2016 Ford Focus against other cars which they drove/owned. Each ranking was based on 9 categories. Here is the summary of top rankings.

Have you driven a 2016 Ford Focus?
Rank This Car

Ford Focus Difference Between The 70kw And 88kw Model

Hi, Just a curious question, does anyone know what part difference there is between the 70kw and 88kw version. Cause they’re both 1.5 tdci and I can’t find any information about it online :/ Anyo...

What Is The The Electronic Part Attached To The Negative Battery Cable?

What is it protecting?

What Is The Top Speed For A 2016 Ford Focus Titanium Four-door Sedan? A Po...

Ok so my car is able to unlock with buttons on my key. I have Already replace battery but car won't start. At first what I had to do was place the battery between the housing for battery to keep b...