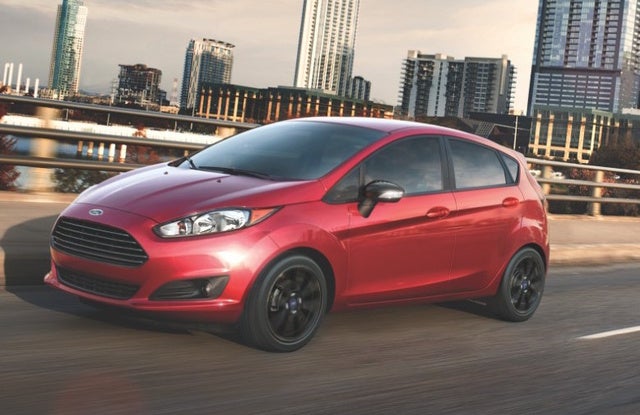 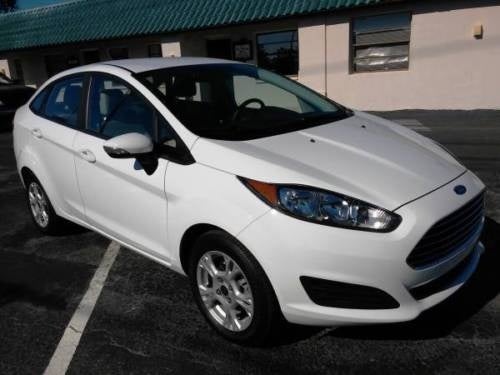 Like a successful blind date, Ford's unassuming Fiesta doesn’t cost much, is a lot of fun to hang with, and could lead to a long-term relationship. Furthermore, while the 2016 version of this value-laden subcompact commuter-scooter will rest on most of the previous iteration's considerable laurels, it is slated, nonetheless, to tote Ford’s vastly improved (so they claim) Sync 3 infotainment technology. More on that later.

The 2016 Fiesta is again offered in both 5-seat family sedan dress and as a practical, if somewhat cargo-challenged, 5-door hatchback. It’s only available in the traditional front-wheel drive (FWD) configuration, but still makes the most of its inherent agility, thanks to its urban-oriented size and powertrains. The 2016 Fiesta remains offered as a sedan or hatchback in the entry-level S, the up-featured SE, and the top-shelf Titanium iterations, while the performance-oriented ST trim is once again available only in hatchback form.

This little Ford’s cabin room is plentiful up front, and the sedan offers a surprisingly capacious 12.8 cubic feet of luggage-toting space, but media types remain unimpressed with the cramped second-row seating in both body styles. Alas, the anemic 26 cubic feet of cargo acreage with the hatchback’s rear seats folded doesn’t help matters.

The standard powertrain for all non-ST Fiestas is expected to remain a city-slicker 1.6-liter inline 4-cylinder (I4) engine that again mates with either the standard 5-speed manual transmission or an optional 6-speed Powershift auto-manual transmission. Look for 120 hp and 112 lb-ft of torque with this normally aspirated I4, while mileage figures again impress at 28 mpg city/36 highway/31 combined in stick-shift-equipped versions, and 27/37/31 in auto-manual variants. Additionally, expect the auto-manual-packing SE trim to remain eligible for the available Fuel Economy package, boasting special tires and wheels, as well as a number of aerodynamic tweaks to the profile, all of which results in an estimated 28/38/32.

Want a little more pop, not to mention fuel economy from your Fiesta? Check out the available 1.0-liter turbocharged (EcoBoost) inline 3-cylinder (I3) powerplant, again optional for the S, SE, and Titanium trims. Sporting only the 5-speed manual transmission, this force-fed I3 is good for 123 hp and 125 lb-ft of torque. Mileage remains a wallet-friendly 31/43/36, which is among the best in the subcompact business.

For the ultimate in 2016 Fiesta-focused driving panache, you’ll have to spring for the ST Hatchback packing the standard 1.6-liter turbocharged I4 mill and a 6-speed stick-shift transmission. Look again for an almost neck-snapping 197 hp and 202 lb-ft of torque from this potentate, good for a 0-60 time of 7.1 seconds, with an estimated 26/35/29 still keeping the fuel budget manageable.

Appearance-wise, this pint-size 5-door offers, depending on the trim selected, 15- or 16-inch steel or alloy wheels, keyless entry, and—on the Titanium—heated outside mirrors and a rear spoiler. The sporty ST, meanwhile, adds in standard 17-inch alloy wheels and performance tires, as well as upgraded brakes that complement a sport-tuned suspension.

Techno-bling, including the upgraded Sync 3 infotainment system, is slated to come standard in each 2016 Fiesta iteration, while the often-frustrating MyFord Touch voice-command unit is scheduled for deletion from the upcoming year’s offerings. The improved Sync 3 technology integrates Bluetooth hands-free machinations and larger buttons in lower trims, with a 6.5-inch touchscreen again slated to be delivered in the Titanium trim, along with Apple’s Siri Eyes-Free feature. Better yet, Ford claims that this improved infotainment setup will offer Apple CarPlay and Android Auto Integration in late 2016.

Entertainment goodies start with the S and SE versions. Both offer a standard CD player boasting 6 speakers and auxiliary audio input, and the SE adds satellite radio service to the list. Again distinguishing themselves from the lower trims, the Fiesta Titanium and ST trims will each boast a standard 8-speaker Sony premium sound system with HD Radio.

Options for the 2016 Fiesta lineup, meantime, are expected to remain a power moonroof, remote engine start, upgraded wheels, and—in hatchback versions—rear-seat DVD entertainment. Don’t discount, by the way, a few tweaks to this list of available perks for 2016.

Unfortunately, the current Fiesta variants fare only second-best in both government and insurance industry testing for overall safety, and that’s not expected to change for the upcoming model year.

While owners of current and earlier Fiesta variants have consistently lauded this subcompact’s value, economy, and fun factor, it’s to Ford’s credit that the newly upgraded Sync 3 infotainment technology seems a direct response to the long list of owner complaints about the previous generation’s Sync and MyFord Touch techno-farce.

Look for the 2016 Fiesta iterations to go on sale in the late summer of 2015. It will challenge such traditional rivals as Honda’s roomy Fit hatchback, along with Chevy’s similarly nimble Sonic, Kia’s capable Rio, and Hyundai’s stylish Accent, with each of the latter 3 available in both hatchback and sedan garb.

GuruL9156 PURCHASED A 2016 SE 28K ON THE ODO. LOTS OF NICE EXTRAS INCLUDED IN THIS FUN TO DRIVE CAR. PEPPY, NOT BUZZY. EASY TO PARK. LOVE THAT BLUE.

Users ranked 2016 Ford Fiesta against other cars which they drove/owned. Each ranking was based on 9 categories. Here is the summary of top rankings.

Have you driven a 2016 Ford Fiesta?
Rank This Car

Why Do Sellers Not Understand What A Manual Transmission Is?

Very frustrating to come on here shopping for a car with a manual transmission. I click the button to select 'Manual' and then I finally get to the pic and there are only two pedals and a shifter wi...

Is It Time For A New Battery?

What's the average lifespan of a 2016 Ford Fiesta battery? My car sat in my garage for 2 days and the battery was dead. Nothing was left on(lights, wipers.etc).Time for a new battery? Thanks

Light is on, is it safe to drive 80 miles home

I've never had snow tires for my Fiesta. After last years winter, I decided to get some for this year. Not sure if I should get just 2 for the front or all 4. Thanks.