The 2016 Dodge Dart hopes to capitalize on compact buyers looking for size and value over advanced powertrain options. 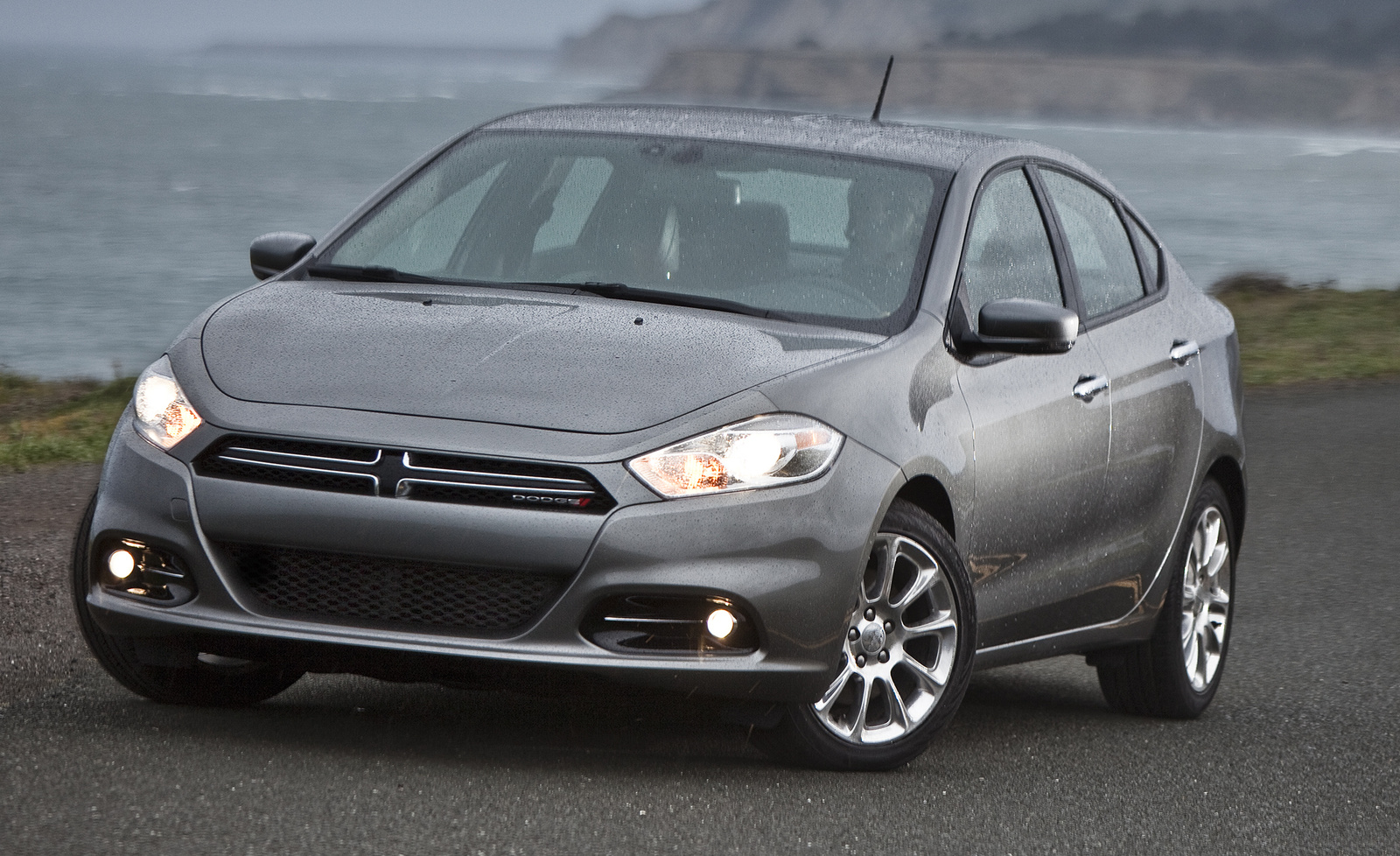 The 2016 Dodge Dart is the king (or queen) of big compacts with a large exterior that rivals that of some midsize sedans. With a lot of metal to haul around, the Dart may not be the quickest in its segment, but an ultra-frugal optional engine at least helps keep mileage competitive. This may be the last year for the current Dart before a badly needed update, which should help it pick up some of the style points that it's lost to competitors such as Honda and Hyundai. 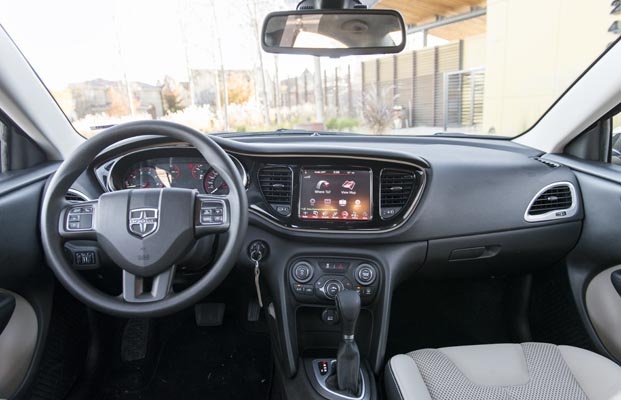 The 2016 Dodge Dart is the fourth year of the current compact car, which shares a platform with many other vehicles in Fiat Chrysler Automobiles' portfolio. The Dart evokes a historical name for the automaker (and perhaps some good feelings), but the compact sedan shares very little with the Dart of yore.

This 4-door compact sedan is hardly compact. Among the biggest in the segment, the Dart rivals some midsize cars in terms of size and interior passenger space. The car is aimed at younger, first-time buyers with a bevy of customization options including bright blue, orange, and red color options.

For this year, very little on the Dart has changed from 2015. Special appearance packages are available for the car, including a sport hood package and a Rallye package with darker accents.

From the base SE trim, the Dart is offered in SXT, Aero, GT, and Limited packages. The base 2-liter 4-cylinder engine is available only in the SE, and an optional 1.4-liter turbocharged four that can be married to a 6-speed dual-clutch automatic is available only in the Aero. All other trims receive a 2.4-liter four, which Dodge has dubbed “TigerShark,” that can be fitted with a 6-speed manual or 6-speed automatic. 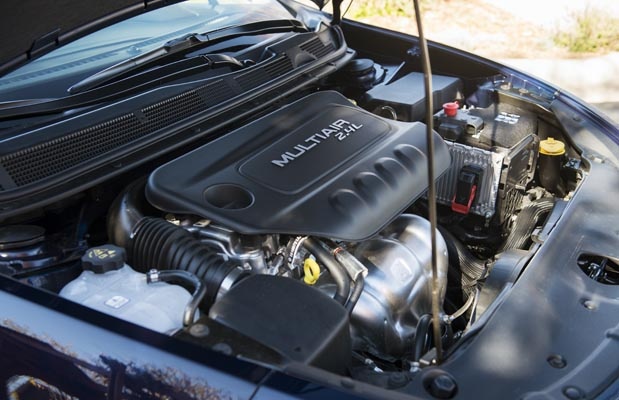 The Dart is offered with a base 2-liter 4-cylinder engine that makes 160 hp and 148 lb-ft of torque. That engine manages 25 mpg city/36 highway/29 combined when paired with Dodge’s 6-speed manual. A 6-speed automatic transmission can be stuffed into the Dart for $1,250 extra and penalizes mileage slightly with estimates of 24/34/27, according to the EPA.

In Aero guise, the Dart can be fitted with a 1.4-liter turbocharged 4-cylinder engine borrowed from parent automaker Fiat, but assembled in Michigan. That mill makes 160 hp and 184 lb-ft of twist, but is suited for low-rev cruising. For long-distance runners that engine can eke out 28/41/32 with a manual transmission, according to the EPA. The turbocharged engine is also available with a 6-speed dual-clutch automatic that drops the highway figure to 40 mpg.

Most Darts, including our SXT tester as well as Limited and GT trims, are fitted with Dodge’s 2.4-liter 4-cylinder that cranks out 184 hp and 174 lb-ft. Those 24 extra horses aren’t academic; they help transform the Dart from miserly distance runner in lower trims into a semi-bright compact in higher trims. The 2.4-liter four can take either a 6-speed slushbox or a semi-lucid 6-speed automatic transmission, which is built for around-town commuting. The manual’s long legs are definitely the pick if you’re looking to make the Dart an interstate hauler.

The Dart’s most potent engine manages 0-60 runs somewhere in the 8-second range, which isn’t the fleetest in its class.

Despite its size and considerable heft for its classification, the Dart’s MacPhersons up front and rear multi-link setup keep the car from toppling too far under its weight. Limited and GT versions benefit from a rear stabilizer bar in back that can help keep the rear end from splashing around. 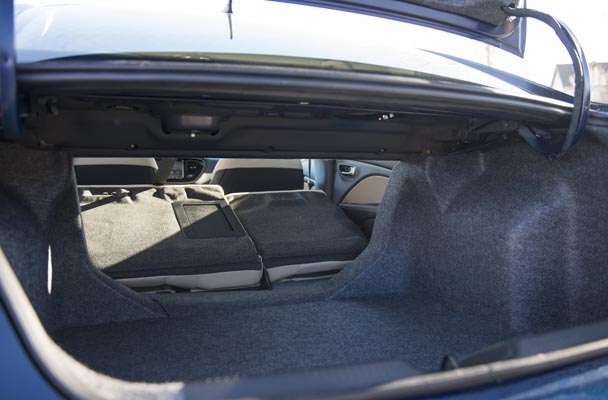 The Dart is built and performs well as an entry-level commuter compact with plenty of room for four. The interior cabin is quiet and composed—much more than you’d expect from a compact car—and registered a hushed 60 dB during cruising.

Four adults can fit comfortably within the Dart’s four doors, with plenty of room for a 6-foot-3-inch galoot such as yours truly. The seats aren’t as comfortable as those of others in its class, such as the Toyota Corolla or Honda Civic, but Dodge keeps the car from penalty-box detail with sporadic use of nice materials. Our SXT tester, shod with cloth buckets up front, was comfy, but we were curious as to how well the deeply pocked interior would hold up.

Dodge’s Dart carries over 400 pounds more weight than the Corolla, and it shows. Although the car manages to shuffle itself well around town, under extreme circumstances—i.e., heavy braking or acceleration—the Dart reveals its heft. The car pitches and rolls a little more than some in its class, although it’s hardly noticeable in everyday driving.

Dodge seems to have found a better formula for commuter cars than some in the Dart’s steering rack. Its turns are relatively sharp and precise—despite having a fairly large turning radius—and despite some serious boosting at low speeds, driving on the highway is confident and sharp. 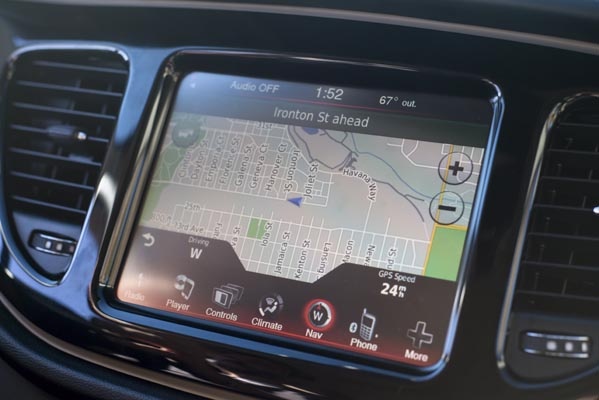 What the Dart may lack in relative powertrain perks, it attempts to make up for in interior design, perks, and space.

Dodge packs most trims of the Dart with a large, 8.4-inch Uconnect touchscreen as standard (it’s not available in the SE and optional for SXT trims) that’s informative and easy to use. The screen may not be as sharp as others in its class, but its menu navigation is simple and intuitive—something I believe my 60-year-old father could master quickly. A large 7-inch TFT display is standard in Aero, Limited, and GT trims, but be warned that the base instrument cluster in SE and SXT grades is not very sharp or appealing.

The Dart’s interior fit and finish is on par with the rest of the segment, and interior materials feel sharp for a car that competes near $17,000 to start. The car looks and feels sturdy, a departure for old Dodge vehicles that felt more than hollow.

The rear seats sport a full 35.2 inches of legroom, which is 1 inch shorter than the long Honda Civic’s legroom, but fully 6 more inches of hip room for rear passengers. 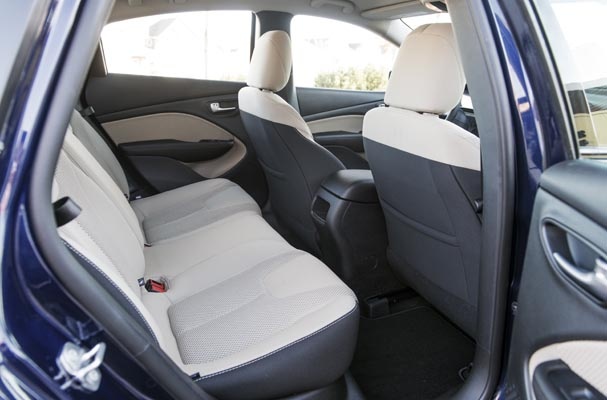 The National Highway Traffic Safety Administration rated the Dodge Dart with a 5-star overall crash rating, including 5 stars for front and side crashes. The Dart received only 4 stars in rollover crash testing, according to the agency.

The Insurance Institute for Highway Safety rated the Dart as Good in all its crash ratings, except its notoriously difficult small-overlap test, where it earned an Acceptable rating.

Rear backup cameras are standard for models equipped with an 8.4-inch touchscreen. 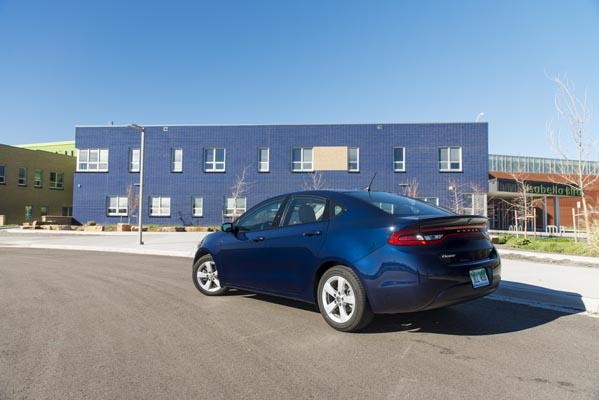 Starting at $16,995, the Dart presents value in the compact segment based on its size. Although the engines aren’t the most potent in its class, and fuel efficiency may be lacking in city driving—highway cruising is comparable—the Dart makes a compelling case based on available tech, comfort, and size.

The Dodge Dart tops out around $24,000 for a Limited trim with 17-inch wheels, which is lower than top-end competitors such as the Civic that can approach $27,000 on the high end.

The 2016 Dart suffers in powertrain advancements and some style, although it’s expected that Dodge will significantly refresh the Dart for 2017.

Howard I have owned a 2014 STX which is virtually the same as the 2016. Only fault is the mileage. Sticker said 31 mph on the highway I got 34 to 36 mph driving from Mi to Fl. I can live with that to get the giant 8.4 in infotainment/navigation. It has a very good base radio, mostly soft interior surfaces. good pick-up, nice ride, roomy front seats, nice looks and instrementation. If it had a better warranty, I would buy it when the lease is up.,, , .

Tim Point 1: People have been turned off by modern car durability for years. Every site out there likes to claim that this has been greatly improved, but improved from what? I'm just old enough to have owned a couple of new cars in the late 1960's, and early 1970's, so I know you cannot be comparing to those. In many modern cars, this probably has something to do with engines built in Spain & Mexico. Actually, after attempting to hop up a couple of those, and discovering a brand new engine which had been built to tolerances instead of specs, I would say this is very likely. Point 2: What's with these transmissions that have as many gears as a big rig? Way back in the 1950's, GM developed something called the Dyna Flow, where the pitch changed on the torque converter so that it did not need to change gears. Engine RPM would hardly vary, and power was not hurt. Perfect for great fuel mileage, but it disappeared way back when (but a lot of cars with one in it are still on the road). It seems like this would be a great idea to bring back. But, I guess people like to brag about their car transmission with as many gears as a Road Ranger? Point 3: Keep building up that handsome appearance, because a lot of people don't buy it. Individuality has always been a major factor in car sales. The Mini Cooper should have been enough evidence for that. Yet how many models share the same space frame today? This point may be the most damaging of all for current car sales. Or rather the reason so few people buy a new car every year these days. That's my take for why car sales aren't exactly spectacular these days, especially with the greatly increased market size. Nobody wants to take any risks. Even great ideas that were refined long ago are ignored. Technology has greatly improved, but in utilizing this highly vaunted global economy, those increases in technology have been negated. And to be honest, styling stinks. This handsome Dart is actually butt ugly.

Users ranked 2016 Dodge Dart against other cars which they drove/owned. Each ranking was based on 9 categories. Here is the summary of top rankings.

Have you driven a 2016 Dodge Dart?
Rank This Car

Radio Display Is Black And Not Working And Ac Is Blowing Cold Air But Contr...

When I started my car to leave working I noticed my radio didn't come one and the display screen was black. The ac is blowing cold air but the control panel is not working either so I cant turn it ...

i need some help with my dart i'm having radio problems. when i take the negative off the battery and put it back on at a later time it works just fine . But if i stop and go in a store and come back ...

I am experiencing a loss of oil in my 2016 Dodge Dart (2.0L). I am not having any success with the dealer and I feel like they messed up on my original oil change. I had a trip from VA to Georgia a...

I have a 2016 Dodge Dart SXT, automatic trans. This morning I put the car in reverse, stopped, and moved the shifter into park. I let off of the brake and realized that I was still in reverse. The...

I’m going on a long trip and don’t want to travel with my check engine light on. I went to O’Reillys and they told me it could be because of the temperature dropping or my thermostat is bad. It’s ...

352 views with 2 answers (last answer about a year ago)