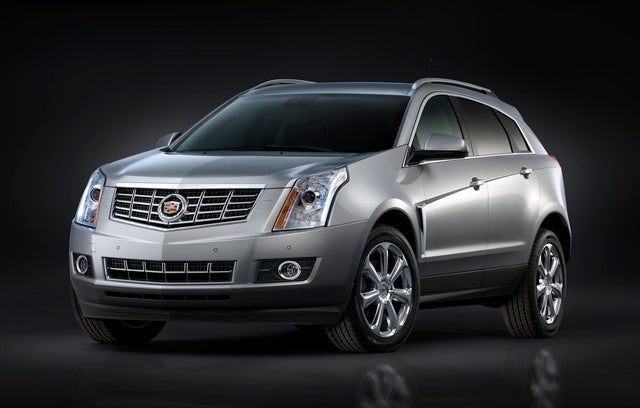 Amid rumors of its imminent demise, or at least a hinted XT name change in the near future, the Cadillac SRX entry-level luxury compact crossover nevertheless glides into 2016 continuing to offer 5-passenger seating, plenty of posh, and 61 total cubic feet of cargo space when it gets into dealer showrooms in mid-autumn of 2015.

Rumors out of Cadillac headquarters indicate that a next-gen version, possibly with a significantly altered profile, 3 rows of seats, a new powerplant, a revamped chassis, and some upgraded handling attributes, will take over from the SRX and be called the Cadillac XT5, possibly as early as the 2017 model year.

We can look to the 2016 SRX to again be offered in 4 trims: the base Standard, the up-featured Luxury, the sport-oriented Performance, and the flagship Premium. All trims will remain delivered in the standard front-wheel-drive (FWD) configuration, with the 3 higher trims again eligible for available full-time all-wheel drive (AWD).

Because of the anticipated redesign and re-branding, don’t expect the upcoming model year’s SRX iterations to flaunt any earth-shaking changes, although a hefty upgrade to the 4G-LTE-toting Cadillac User Experience (CUE) infotainment and Wi-Fi hotspot technology is expected, as are a few changes to the coding and content of some of the options packages in the lower trims.

Again powering the upcoming SRX iterations is the ubiquitous 3.6-liter V6 engine in combination with the standard 6-speed shiftable automatic transmission. Look for 308 hp and 265 lb-ft of torque from this competent drivetrain. Alas, mileage will doubtless continue to be a somewhat disappointing 17 mpg city/24 highway/19 combined in FWD versions, and an even more disheartening 16/23/18 in AWD variations. With the optional trailer towing package installed, by the way, this pint-size ute can tow up to 3,500 pounds.

Expect standard appearance goodies in the 2016 SRX to again include 18- or 20-inch alloy wheels, depending on the trim selected, along with a rear spoiler and a roof rack. Higher trims, furthermore, will return featuring heated power-adjustable mirrors, a power sunroof, a power liftgate, and, in the Performance iteration, a sport-tuned suspension with adaptive dampers.

Techno-goodies, meanwhile, range from the standard Bluetooth-interfaced OnStar hands-free infotainment functions, with the included (and upgraded-for-2016) CUE infotainment and 4G LTE Wi-Fi capability, to smartphone apps and, in the Performance and Premium editions, standard GPS navigation.

Options for the 2016 SRX lineup include a bunch of stuff that comes standard in higher trims remaining optional on lower-cost versions, while the abovementioned towing package is available lineup-wide. Of course, all trims except the entry-level Standard can be delivered with available rear-seat DVD entertainment as well. And in one slight change for 2016, the Luxury package that’s standard in higher trims and available to the Standard edition, will no longer include power-adjustable pedals.

Government crash testing of the current SRX trims has them earning a perfect 5-star safety rating overall, with the Insurance Institute for Highway Safety (IIHS) also giving this posh-packing mini-ute its highest rating of Good in all categories.

Owners of the 2015 SRX report impressive performance and comfort from their high-end commuter scooter, though many note that mileage numbers could be better. Meanwhile, the upcoming year’s SRX lineup will once again do battle with Acura’s class-leading RDX, Volvo’s stylish and family-friendly XC60, Audi’s well-wrought Q5, and BMW’s handsome and practical X3.

GuruKFPRH We love our 2016 CRX Luxury Model. Bought a lease return in 2018 with 18.2K miles. Now have about 32.5K. I average 20.2 mpg on regular gas (top tier) it's ride is surprisingly comfortable with computer aided ride sensors. Front seats are very comfortable with rear being slightly less comfortable. The air filtration system is outstanding (I have COPD) The touch scree developed "crazing" and was replaced under warranty. The power was another pleasant surprise with the V-6 engine.

Users ranked 2016 Cadillac SRX against other cars which they drove/owned. Each ranking was based on 9 categories. Here is the summary of top rankings.

Have you driven a 2016 Cadillac SRX?
Rank This Car

Cadillac Has A Loud Roar

I have a 2016 Cadallic SRX with 67000 and I went to the mts when I came home the car started having a loud roaring noise in the front but lessens when I turn to the right, What is it?

Wipers Will Not Turn On.

My wipers will not come on with the speed controller but will come on when I pull the lever back to wash the window they will come on to wash?

I have agreed to pay the price listed on CarGarus and the dealer wante to mark it up 999 Dealer Fee and 399 Filing Fee.

I have a 2016 Cadillac SRX with the CUE system. It does not have navigation. Is there a computer chip add-on which can be purchased to upgrade the CUE system with Navigation? I am not interested in ...

Can You Turn Fog Lights On Permanently?

How do you turn fog lights on permanently?