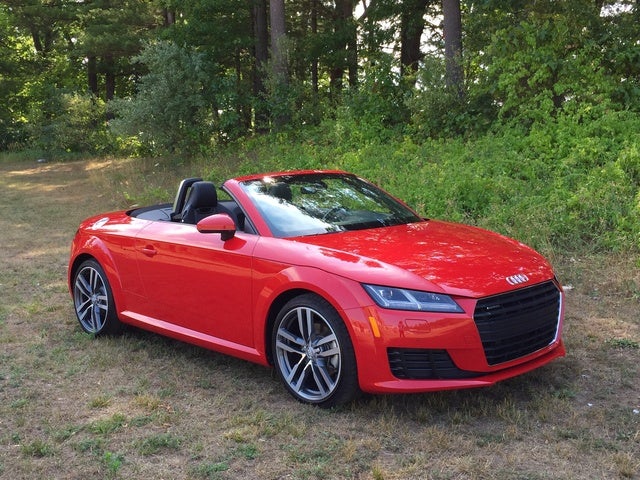 Audi brings its relatively venerable TT coupe into the 2016 model year with a few styling upgrades, more power, some added perks, and, doubtless, a slightly higher MSRP. This sporty compact 2-door, which debuted for the 1998 model year, again seats 4 and remains delivered in a pair of trims: the 2.0T Quattro Coupe and the 2.0T Quattro Roadster (convertible). Its standard all-wheel drive (AWD) has been revised for 2016 to deliver some added athleticism.

Among further expected upgrades for 2016 are additional aluminum exterior panels that help shed some 110 pounds from this heady coupe’s curb weight, along with a slightly longer wheelbase (98.7 inches), a marginally lower stance, restyled LED headlights, a revamped grille, and a redesigned hood, all of which add a dose of needed aggressiveness to the TT’s once yawn-inducing profile. Also new for 2016 are a bunch of improvements to the cabin, including added aluminum inlays, upgraded leather upholstery with additional colors offered, and updated multimedia technology.

As mentioned, Audi’s 2016 TT has packed some added ponies into its standard turbocharged 2.0-liter inline 4-cylinder (I4) powerplant. This tweaked force-fed I4 will put out 230 hp and 258 lb-ft when mated with the standard 6-speed auto-manual transmission. Meantime, a number of reviewers seem confident the 6-speed manual transmission offered in European editions will make its way to the U.S. in this third-generation offering. Mileage figures for the up-powered 2016 2.0T Quattro TT are thus far unavailable.

Speaking of anticipation, a peppy turbodiesel I4 that’s currently optional in European TTs is also rumored to among the available powertrain offerings for the U.S. next year. Stay tuned.

Expect all of the above to be complemented in the Roadster by a power-opening fabric convertible roof and fixed rollbars. Meanwhile, trunk space in the coupe is a respectable 13.6 cubic feet (about half a cubic foot larger than the 2015 edition), while the Roadster, which has to accommodate the roof when the top's down, offers 8.8 cubes.

Users ranked 2016 Audi TT against other cars which they drove/owned. Each ranking was based on 9 categories. Here is the summary of top rankings.

How do I open my trunk before exiting the car?

102 views with 2 answers (last answer about a year ago)

How Does AutoPay Or "CarGurus Pay" Work?

How To Arrange Payment With Remote Buyer Of My Car

Buyer is in California, and my car is in North Carolina. He wants to buy and have shipped to CA, and I want to sell. Does CarGurus handle (securely) the exchange of money?