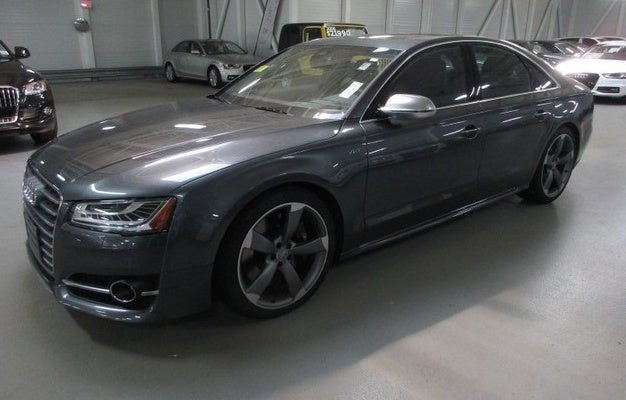 With so many amazing Audi S-line performance sedans, one would assume that the smaller and lighter-weight among them would also be the quickest. But such does not appear to be the case: the quickest S-line from Audi is its mighty 2016 S8. This full-sized car is Audi’s flagship performance sedan, and it stands apart from the A8 in important ways. The S8 was refreshed slightly last year, with an exterior style that displays the classic and the modern in perfect harmony, but what makes it truly special is mostly what's under the skin.

First, the wheelbase. In the U.S. market, the 2016 Audi S8 will employ the “NWB," or normal wheelbase, about 202 inches long. The more luxury-focused A8 line has a longer wheelbase with five extra inches dedicated to rear-seat room, which makes the vehicle somewhat more useful as a limousine. The S8, however, is a driver’s car, and it is not “stretched.” That said, the S8 is still a vehicle in which every passenger is afforded ample room to relax, stretch out, and most likely hold on, since the driver is piloting one of the fastest large sedans ever built.

The 2016 S8 also stands alone among Audi’s full-size sedans thanks to its engine. As opposed to the four different engines available in the A8, the S8 uses only a 4.0-liter TFSI turbocharged V8. This is Audi's most powerful sedan engine, eclipsing even the top-spec A8's 6.3-liter W12. With 520 hp in its “normal” state, and an amazing 481 ft-lb of torque from just 1,750 RPM, the V8 is ready to pull with maximum torque just off idle, or scream to its redline, all depending upon the driver’s needs. The engine is mated to an eight-speed “Tiptronic” automatic, which is not a dual-clutch automatic, but rather a conventional torque-converter unit that offers smooth shifts and a very linear feel. Though a dual-clutch auto may have trimmed a tenth or so from the S8's sprint times, the conventional automatic in an executive sedan cannot be beaten for its drivability. Quattro all-wheel drive is standard, of course, partly to help distribute the sedan's power and partly to add all-weather capability.

The results of this impressive hardware list include a 0-60 MPH time of just 3.9 seconds and a 155 MPH top speed. The top speed is limited by the car’s software, too, and the S8 could go much faster if Audi let it off the leash. Unsurprisingly, fuel economy numbers are less than thrilling. The 2016 S8 is rated by the EPA as having an estimated 17 mpg city/27 highway/20 combined using premium fuel.

Audi offers a “Plus” version of the S8 in markets outside the U.S., with an enhanced engine system that allows short bursts of added power. The turbos and engine management system “go to eleven” and the power climbs to 605 hp. This being the second year of the S8 since its refresh, we would not be surprised if the Plus became a mid-2016 offering intended to boost sales. The results of the added power don’t show up much on the specs page, dropping the 0-60 MPH time by only 0.1 seconds, but those buying this car will probably want the Plus.

Focusing too heavily on the 2016 S8’s muscle-car abilities, however, is not totally fair. The S8 interior offers Audi’s highest level of refinement, with standard appointments that are already at the top of the market, such as contrast stitching on the fine leather upholstery and a center tunnel thick a bridge abutment, where you can rest your arm or stash any items large or small. The dash is classic Audi, but bigger, featuring a large center infotainment screen that works with Audi’s highly-rated MMI (man-machine-interface). The trim materials are highly customizable and offer stylish contemporary designs such as Carbon Twill Copper.

The base price of the 2016 Audi S8 will be about $116,000. Not a single buyer interested in this car will want a “base” model, though, and Audi is happy to help with that problem. Just adding heated seats will pad the price tag by $750, and most of the other options have an added zero over "normal" pricing. For example, the forward collision prevention and active cruise control package, now being sold for between $350 and $1100 by most mainstream automakers, costs $2,100 on the S8. The Full Leather Package adds $5,500 and Night Vision Assist adds $2,300. Most buyers will also choose one of the $5,500 special leather color packages, such as Balao Brown Leather with Balsamic Brown Natural Fine Grain Ash Wood Inlay. Those planning to take home a 2016 Audi S8 should budget around $135,000.

Forcematrix People are afraid to pass you in this car. I find people will pull along side you just to get a better look at the car. Mythos black with the 21" wheels are a killer look, and serious head turner. Acceleration is down right intoxicating!