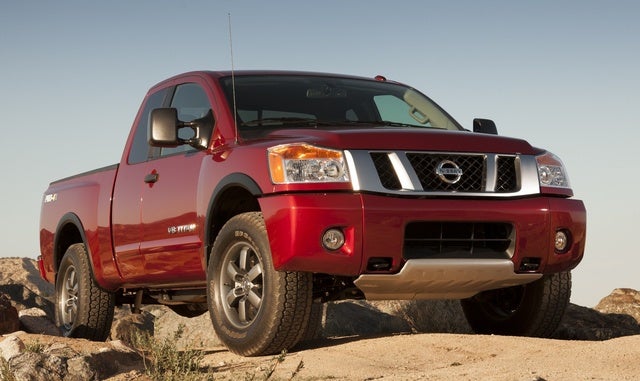 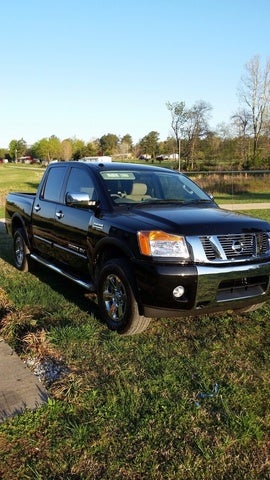 Although it's a relative latecomer to the immensely popular full-size pickup market here in the U.S., Nissan’s medium-duty Titan is designed for those who want Japanese reliability along with domesticated toting and hauling proficiency. Unfortunately, this otherwise capable truck lacks the styling and features upgrades, not to mention the multiple engine offerings, common to most of its rivals, thus it won’t be the first choice for those with serious work to do.

Available in a pair of 5- or 6-passenger, 4-door cab configurations, the King Cab (with rearward-opening back doors) and the roomier Crew Cab (regular forward-opening rear doors), the 2015 Titan lineup is also offered in 3 bed lengths, with King Cabs sporting a standard 6.6-foot bed, Crew Cabs carrying a standard 5.6-foot bed, and a 7-foot bed again offered as an option on the Crew Cab SV trim level. The Titan returns packing either standard rear-wheel drive (RWD) or optional part-time 4-wheel drive (4WD), with said 4WD system boasting a 2-speed transfer case and auto-locking hubs. Furthermore, the 2015 Titan once again comes in a choice of 4 trim levels: the base S, the up-featured SV, the off-road-ready 4WD-only PRO-4X, and the flagship SL. Lower trims remain available in either cab configuration, while the SL comes only in Crew Cab garb.

Among the significant changes to the 2015 Titan stable is the deletion of the long-wheelbase edition, leaving only the standard 138.9-inch wheelbase to carry the load. Additionally, a subtle redesign of the interior door panels is evident in all trim levels for this year, as are a few tweaks to options packages, including upgrades to the popular NissanConnect telematics.

Power, unfortunately, may be an Achilles heel in this otherwise capable pickup. Nissan has, since its 2004 inception, offered only the single 5.6-liter V8 engine to drive the entire Titan lineup. Mated with the standard 5-speed automatic transmission, this peppy 8-cylinder puts out 317 hp and 385 lb-ft of torque. Meanwhile, mileage is estimated at a tepid 13 mpg city/18 highway in the standard RWD variations and 12/17 in 4WD trims. Oh, and look for 9,500 pounds of towing capacity out of a properly equipped RWD Titan.

Reviewers have wondered for some time now when the Titan will be offered with, for instance, a gasoline-burning V6 and/or a turbodiesel powerplant to rival its Ram, Ford, and Chevy competitors, which brings us to rumors that just such a fuel-efficient and potent powertrain profusion might be on tap for 2016.

Inside, and again depending on the trim level chosen, look for cloth or leather-trimmed upholstery, full power accessories, a power-sliding rear window (Crew Cab versions only), cruise control, tilt-wheel steering, air conditioning, and a single-CD player with either 6 or 8 speakers.

Users ranked 2015 Nissan Titan against other cars which they drove/owned. Each ranking was based on 9 categories. Here is the summary of top rankings.

Have you driven a 2015 Nissan Titan?
Rank This Car

I have a 2015 Nissan Titan Pro-4x. I just towed w/I for the 1st time last week. When I plugged in the lights, I had brake & turning lights but I had no running lights. At 1st I thought it was the tr...

Is there a way to display music information when playing a CD???? Its seems this should be standard with all the technology this truck possesses. It displays everything from my bluetooth device an...