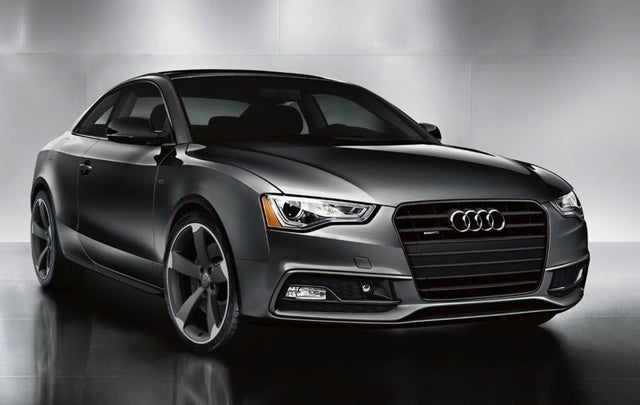 Average user score
5 ⁄ 5 stars
Based on 4 reviews
Nice Nut Annoying by Kellyturner67 — Beautiful car and engineering but lacks on board technology in a big way. In addition, what continues to be very annoying is the lack of consideration for the need of a console in which you can not o... Read More 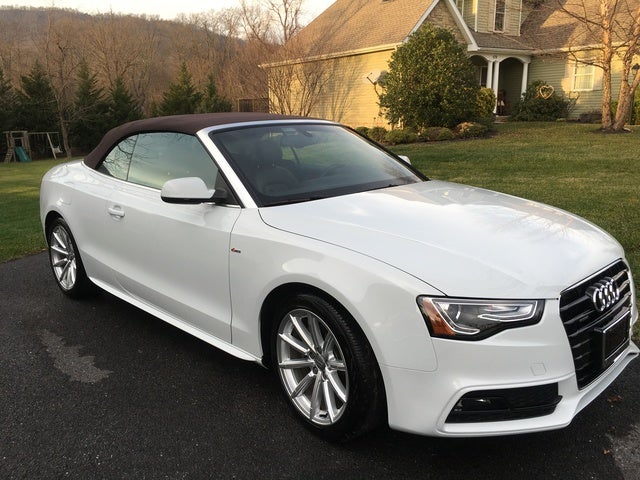 Some new standards complement the graceful curves of Audi’s attractive A5, just in time for an updated platform to arrive next year. When it shows up, the next generation of the A5 will be more than 200 pounds lighter than the current iteration, but until then we’ll have to be satisfied with some extra features for this comely coupe.

Comfort and visibility were at the top of the priority pile for Audi this year, and the A5 now boasts standard 3-zone climate control as well as xenon plus headlights with LED front running and taillights. A nice little addition to an already attractive package, but what else should you expect when you combine German engineering with Italian design?

Yes, Audi’s had a hell of a turnaround in the aesthetics department since de Silva took over. The days of dull design are long behind us, and while still not the flashiest vehicles patrolling the streets—make no mistake, this is a good thing—Audi can currently boast some of the most gracefully understated, with the A5 potentially leading the surge.

As the coupe version of the 4-door A4, the A5 can also be enjoyed topless, although it will come with a bit of a price bump this year. Previously, base models of the A5 cabriolet were fitted with front-wheel drive (FWD) and a continuously variable transmission (CVT). This year, it’s all Quattro and no sluggish CVT, with the 8-speed Tiptronic pulling cog-swapping duties for the time being. Rumors have circulated about a new dual-clutch 8-speed in the works, though, so stay tuned.

Regardless, all A5 trims get the same turbocharged, direct-injected 2.0-liter engine, good for 220 hp and an even more impressive 258 lb-ft of torque. Get it with the 6-speed manual, and you can expect to see 22 mpg city/32 highway and a sprint to 60 in 6.4 seconds if you can match the pros. Don’t feel like rowing your own? The 8-speed Tiptronic will hit 60 in 6.2 seconds, but you’ll lose 2 mpg on both ends of the scale. Hardly seems worth it.

With trims like “Premium,” “Premium Plus” and “Prestige,” you know even the base is going to be far from a stripper. Avoid checking any option boxes, and you’ll still be greeted by a 10-speaker stereo with Bluetooth, Audi’s multimedia system, a panoramic sunroof, leather, fog lights and LED turn signals, in addition to the new standards mentioned above.

The S-Line exterior trim is now standard on the Premium Plus, and that adds to heated front seats with memory, automatic climate controls, a power trunk and power-folding mirrors. A small jump here, but the Prestige really packs it on with navigation and Audi Connect for the 14-speaker Bang & Olufsen stereo, a rear-view camera with Audi side assist, keyless start and the ultimate upgrade—color for the driver-info system.

Of course you can add adaptive cruise, sport seats, a Black Optic package for extra black trim and 19-inch wheels with a unique rotor design, or the ultimate add-on: Audi Drive Select, for adjustable suspension, steering, transmission and throttle settings.
But even with the Premium trim, you’re getting a hell of a lot of car. What’ll be the real deciding factor is whether or not you want to wait for the upgraded platform next year. The A5 is already one of the best-handling coupes on the road, helped by a couple of smart suspensions and an engine placement that provides an advantage in weight distribution. But it’s hard to argue against dropping 200 pounds, and the next A5 is certain to hold some fun surprises as it continues to evolve.

Users ranked 2015 Audi A5 against other cars which they drove/owned. Each ranking was based on 9 categories. Here is the summary of top rankings.

How To Get The Best Leasing Deal On A Convertible

need to lease a 4 seater convertible

Audi A5 For Sale