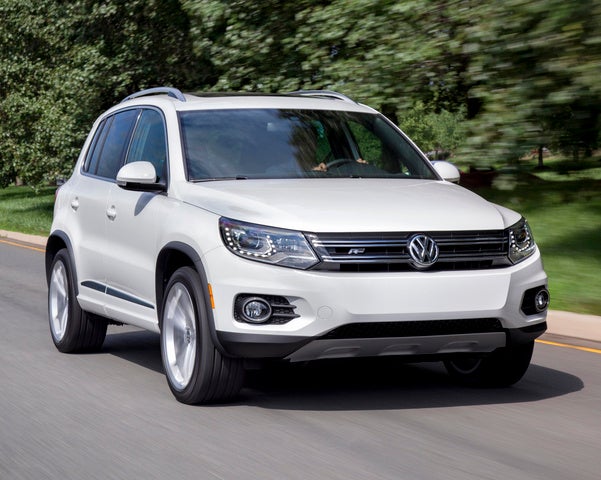 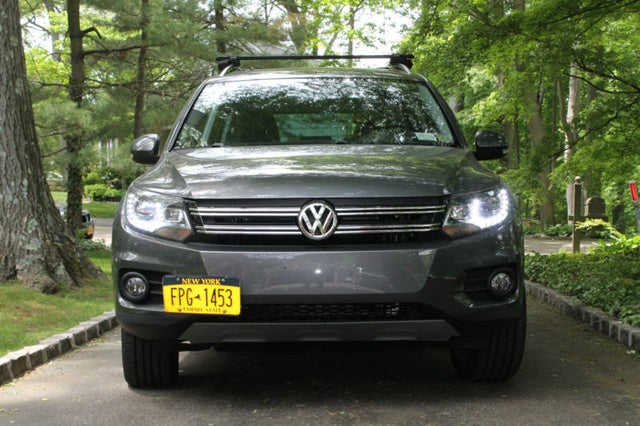 Compact and cosmetically gifted, the 2014 Volkswagen Tiguan lineup gains an added trim in the semi-sport-oriented R-Line. Added to this smallish 5-seat SUV’s traditional 3 trims, the base S, the up-featured SE and the now-second-fiddle SEL, the R-Line contributes little to the Tiguan practicality factor but, with its standard sport-tuned suspension, might make the morning commute a little more enjoyable. Alas, this latest addition to the stable also doesn’t do much for this allegedly family-leaning mall-hopper’s heftier-than-ordinary MSRP, nor does it add significantly to what some in the media perceive to be a lack of true utilitarian advantage, unlike its larger, and therefore roomier, Touareg cousin.

Nevertheless, a few tweaks in 2012 gave this compact ute a more modern look, while a revised transmission gave it a bit more fuel efficiency. Except for the new R-Line trim, however, no significant changes have taken place since. Many reviewers, furthermore, claim that the Tiguan is a mini-ute designed for the masses, with lots of style and a comparatively overachieving cabin ambiance, but lacking the expected German precision.

The modified Passat chassis gives this little hauler a sedan-like quality that’s high on ride comfort, but light on agility and driving pizzazz, while cargo area, lineup-wide, returns at a somewhat paltry 56.1 cubic feet with the rear seatbacks folded. To its credit, however, this latest Tiguan iteration again offers full-time all-wheel drive (AWD), known in VW-land as 4Motion, that can be selected in place of the standard front-wheel drivetrain (FWD).

In any case, the standard turbocharged 2.0-liter inline 4-cylinder (I4) powerplant remains the Tiguan’s only engine offering again in 2014. Mated with the standard 6-speed manual transmission found in the S and the R-Line, or the 6-speed shiftable automatic that manages the SE and SEL trims (and that can be selected as an option on both the others) the four-banger puts out 200 hp and 207 lb-ft of torque. That’s good enough to tow up to 2,200 pounds with the proper equipment, but again, drivers are encouraged to fill up with premium gas to keep this undersized unit running right. Speaking of gasoline, variable valve timing (VVT) keeps mileage in FWD stick-shift-equipped versions a respectable 18 mpg city/26 highway, while FWD automatic-packing trims get 21/26 and AWD trims, which tote only the shiftable automatic, are estimated to get 20/26.

The AWD/4Motion system, as is typical, allows cruising in FWD under normal conditions, with power automatically and instantly transferred from the wheels that slip to the wheels that grip, whether front or rear, when things get dicey.

Options, or rather accessories, lineup-wide, include a ball-type trailer hitch, upgraded floor mats, splash guards and side steps, while an available Appearance Package decorates the SE trim with 18-inch New York alloy wheels and a Premium VIII sound system with HD radio.

What's your take on the 2014 Volkswagen Tiguan?

Users ranked 2014 Volkswagen Tiguan against other cars which they drove/owned. Each ranking was based on 9 categories. Here is the summary of top rankings.

Have you driven a 2014 Volkswagen Tiguan?
Rank This Car

When I take my son to his music lesson, I like to sit in my vehicle and read (takes about 35 minutes). I always make sure that the ignition is off (no radio, no air, no lights). Up until 2 weeks a...

Connection In Armest Of 2014 Tiguan

I have a connector in the armrest that has 2 * Cables, one with an apple conncctor and one with a USB connector. I just want to know what these are used for? is it just a charging point or does it h...

Searching For Tiguan With Manual Tranny

P0303 code # 3 cyl misfire, replaced all spark plugs and the # 3 coil. Still have the check engine light and it won't reset, even if I disconnect the battery. So what's next