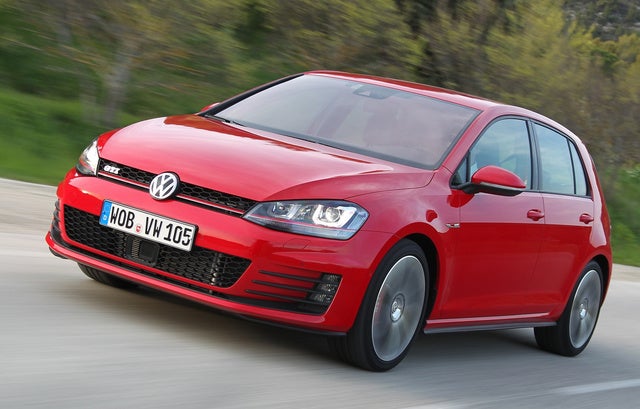 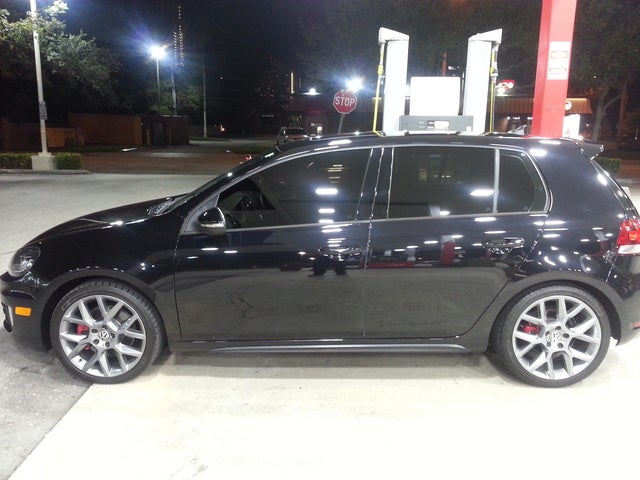 For U.S. fans of the Volkswagen GTI compact sport-oriented hatchback, there's both good news and bad news. As expected, the long-awaited seventh-generation GTI, based on the redesigned VW Golf, debuted at the 2013 Geneva Auto Show as a 2014 model. However, for its first year of production, VW will offer the new GTI for sale only in Europe. The GTI will debut in the U.S. during the first half of 2014 for the 2015 model year, so U.S. buyers will have to wait until sometime in 2014 to get their hands on the latest version of one of world's most sought-after hot hatches. In the meantime, a few sixth-generation GTIs will remain on dealer's lots, and could be smart buys for prospective owners interested in this solid, versatile and well-reviewed performer.

While the current GTI continues to come with a turbocharged 2.0-liter TSI 4-cylinder engine delivering 200 hp, VW will offer the new GTI with 2 levels of power for the first time. In its standard configuration, the new GTI's turbocharged 2.0-liter 4-cylinder engine will boost hp to 220 and torque to 258 lb-ft, up from the current 207 lb-ft. For European versions of the new GTI, VW also offers a factory-installed Performance Pack, which pumps up the power to 230 hp. The Performance pack also adds larger brakes and a torque-sensing limited-slip differential. However, according to some reports, VW is still deciding whether it will offer the Performance Pack for U.S. versions of the new GTI, due to emissions and fuel economy issues. In both configurations, the new engine will include a start/stop system to conserve fuel and will offer improved fuel economy numbers of up to 39 mpg when equipped with a 6-speed manual transmission. VW will also offer the new GTI with an optional 6-speed DSG dual-clutch automatic transmission.

The 4-cylinder engine in the current GTI similarly mates to a 6-speed manual transmission, which comes standard, or the optional DSG dual-clutch 6-speed automatic, which includes paddle shifters for manual shifting. The current engine posts relatively decent fuel economy numbers of 21 mpg city/31 highway with the manual shifter and 24/33 with the automatic. Naturally, the majority of reviewers prefer the manual shifter, since it delivers a sportier driving experience, but some buyers will no doubt prefer the better fuel economy numbers that come with the automatic.

For the sixth-generation GTI's final year in the U.S., VW narrows the lineup to just the well-equipped Wolfsburg Edition and top-level Driver’s Edition trims. Both come only in a single 4-door hatchback body style, although the automaker also makes both trims available in low-emissions PZEV versions for sale in some states. Both trims display an aggressive front end design, with a black honeycomb grille accented with red stripes. Angled teardrop-shaped halogen headlights, horizontal taillights, a chrome-tipped split rear exhaust, a body-color spoiler and 18-inch aluminum-alloy wheels are among the other standard features on the Wolfsburg Edition trim. The Driver's Edition adds HID headlights, LED daytime running lights and an adaptive front lighting system, as well as a full-width honeycomb fascia with twin air intakes and vertical halogen foglights.

The sixth-generation GTI continues to ride on a front-wheel-drive platform with a European sport-tuned suspension. The suspension gives the GTI a stable, well-planted feel, with nimble handling and minimal body roll, thanks to independent damper struts and a tubular anti-roll stabilizer bar in the front. The rear gets a compact 4-link configuration with telescopic dampers and an anti-roll stabilizer bar. Some testers say the GTI's ride offers a good balance of comfort and firmness, while others would like to see a little more firmness from the suspension. The electromechanical power steering system offers precise control with good feedback.

The GTI's 5-passenger cabin gets good marks from reviewers and owners due to its quality materials, versatile cargo space and roomy front seats with bolsters. The GTI also offers plenty of legroom in the rear seats, even for taller passengers. Up front, the gauges are easy to read, and most controls are simple to operate, though some find fault with the climate controls, which they sa are a little complicated. With the rear seats up, the GTI offers 15.2 cubic feet of storage space in the rear, about average for the class. That expands to 46 cubic feet with the rear seats folded down. However, some reviewers complain that the 60/40-split rear seats don't fold flat, creating an uneven cargo floor.

Standard interior features on both trims include 8-way manual adjustment with power recline for both the driver and passenger, as well as air conditioning, remote keyless entry, cruise control and Bluetooth. The Wolfsburg Edition gets Jacky Plaid cloth seats with red accent stitching, a leather-wrapped multifunction steering wheel, a cooled glovebox and an 8-speaker audio system with a CD player, SiriusXM satellite radio, an iPod port and an auxiliary input jack. The Driver's Edition adds such additional features as Titan Black leather upholstery, a power sunroof and a navigation system with a 5-inch color display.

Safety features for the GTI include 6 airbags, electronic stability control, traction control and antilock brakes with brake assist. The GTI also includes VW's Intelligent Crash Response System, which unlocks the doors, switches on the hazard lights and shuts off the fuel pump in the event of a collision. The IIHS gave the 2013 GTI a top rating of Good for protecting passengers in all types of crashes, and named it a Top Safety Pick. The NHTSA gave the 2013 GTI 4 out of 5 stars for protecting passengers during a rollover, but has not tested the GTI for frontal or side crashes. Those ratings should roll over to the 2014 GTI.

While the GTI gets good marks for its performance, ride, handling and interior comfort, its one weak spot remains its reliability ratings. However, it continues to rank at the top of its class, which includes such vehicles as the Ford Focus ST, the Honda Civic Si, the Mazda MAZDASPEED3, the MINI Cooper S and the Subaru WRX.

What's your take on the 2014 Volkswagen Golf GTI?

Johnny The 2014 GTI from VW definitely has it's roots in performance and handling as well as interior comfort but most complain about how quickly the price jumps up as they all the techie accessories that are normally cheaper or included in the Focus ST or Civic Si for less. Car & Driver did name the 2014 VW GTI one of the best 10 cars for 2014 so it's still rooted in the competition: http://threecountyvw.com/2014/03/20/2014-volkswagen-gti-makes-car-drivers-2014-10-best-cars-list

Users ranked 2014 Volkswagen Golf GTI against other cars which they drove/owned. Each ranking was based on 9 categories. Here is the summary of top rankings.

Have you driven a 2014 Volkswagen Golf GTI?
Rank This Car