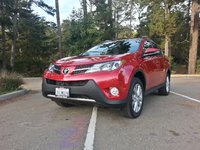 With class-leading space and true crossover heritage, the RAV4 is nevertheless hampered by safety concerns and lackluster acceleration. 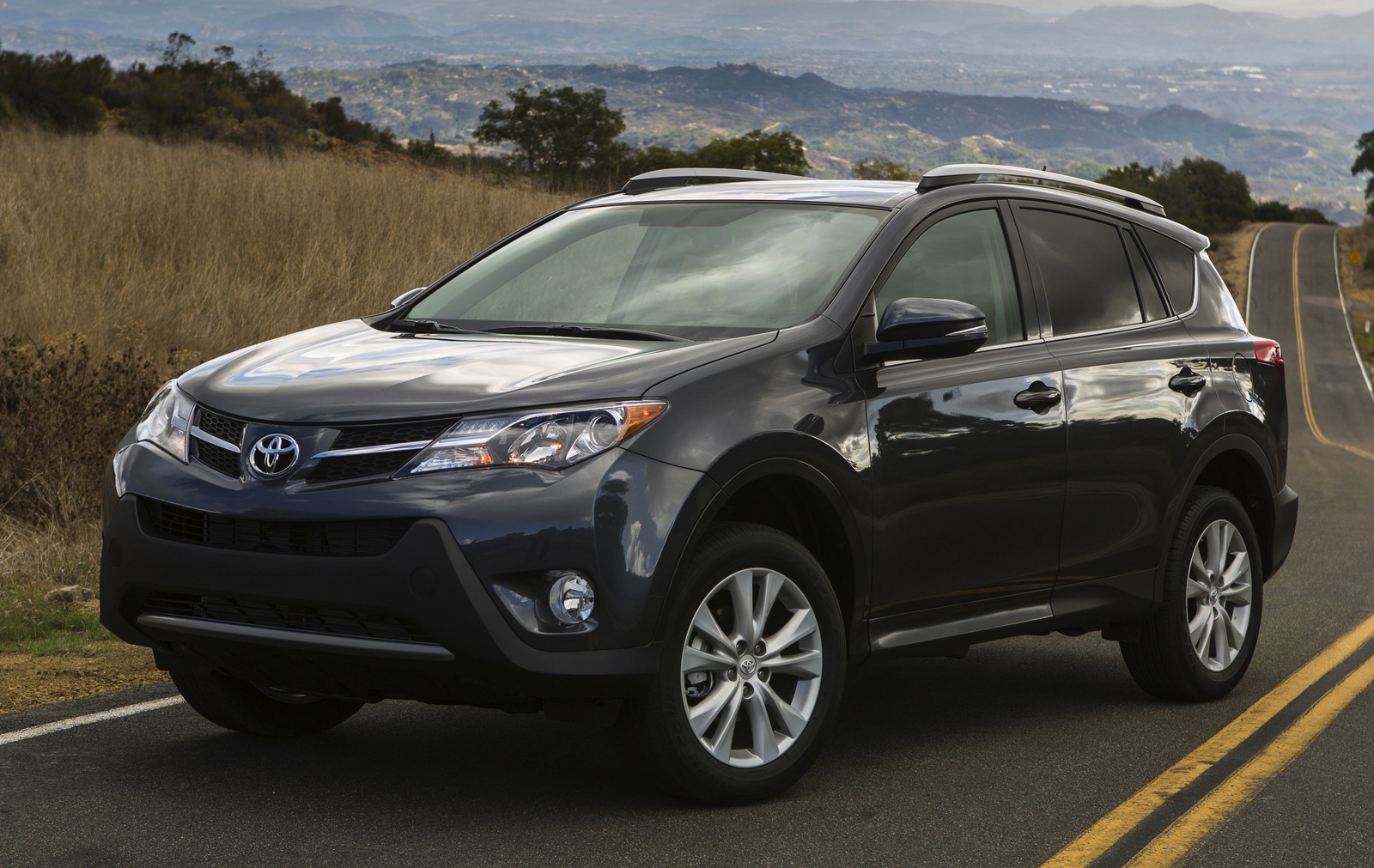 The RAV4 has a lot going for it with class-leading cargo capacity and a near-impervious reputation for being the practical choice when looking for a crossover. It’s not exciting by any means, and some would even classify it as boring, but it’s certainly a dependable option for whatever you ask of it. 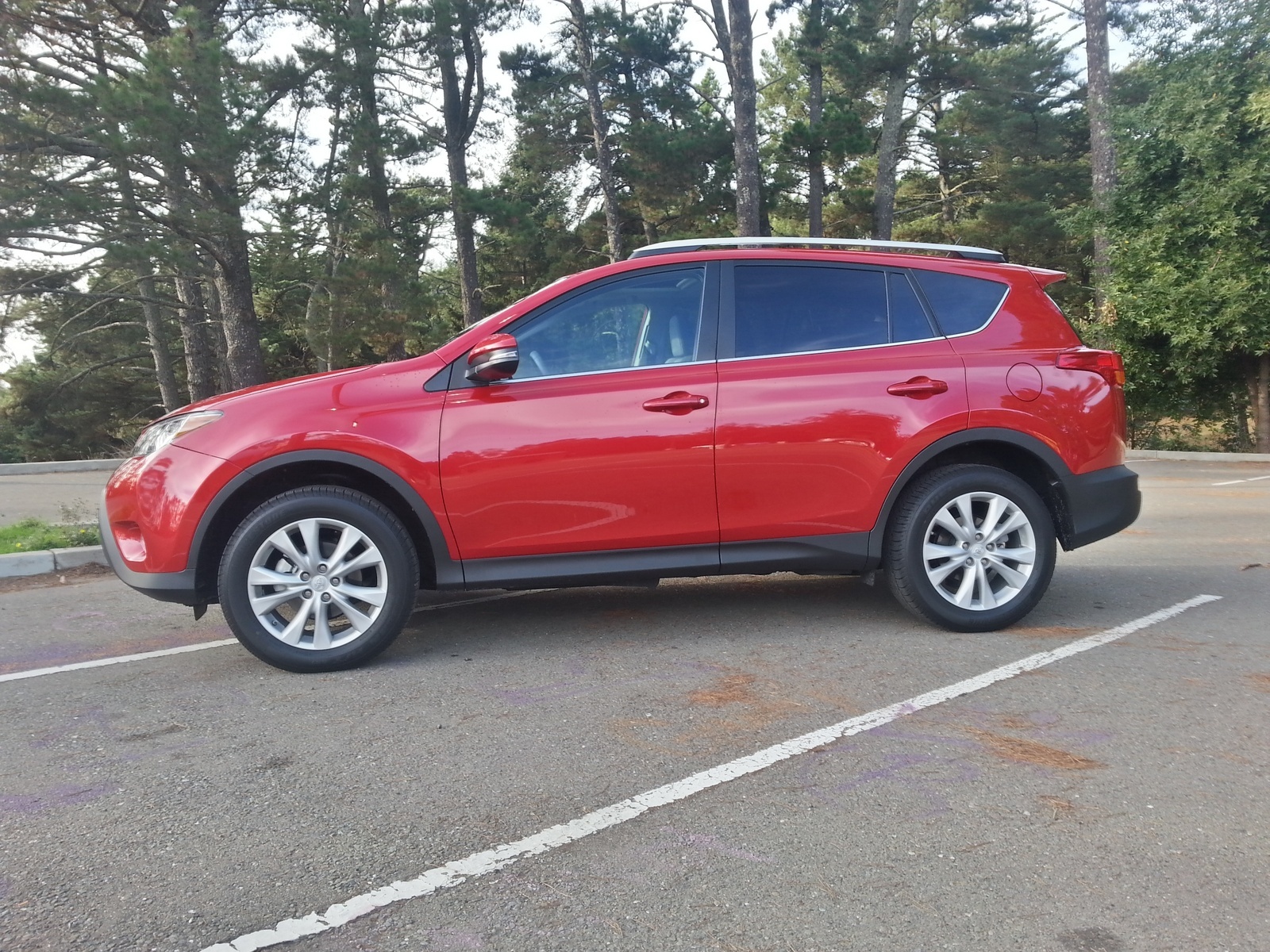 The RAV4 was one of the pioneers of the compact-crossover segment, and despite this illustrious history, it’s managed to remain a background player in both performance and looks over the course of its 20-year journey. A redesign last year did little to change things by adding headlights that look stolen from the Camry (perhaps the most invisible car on the road) and taking away the one fun option for the RAV4, a 3.5-liter V6.

For our test vehicle, we were given a Limited trim with AWD in Barcelona Red Metallic, which added all the features and extras you could want with a crossover, as well as the optional Entune JBL media system with Navigation ($785) and the Technology Package ($725) for blind-spot monitoring, cross-traffic and lane-departure alerts, and auto high beams. Toyota was also gracious enough to include carpeted floor mats ($225), bringing our total delivery price to $32,315. 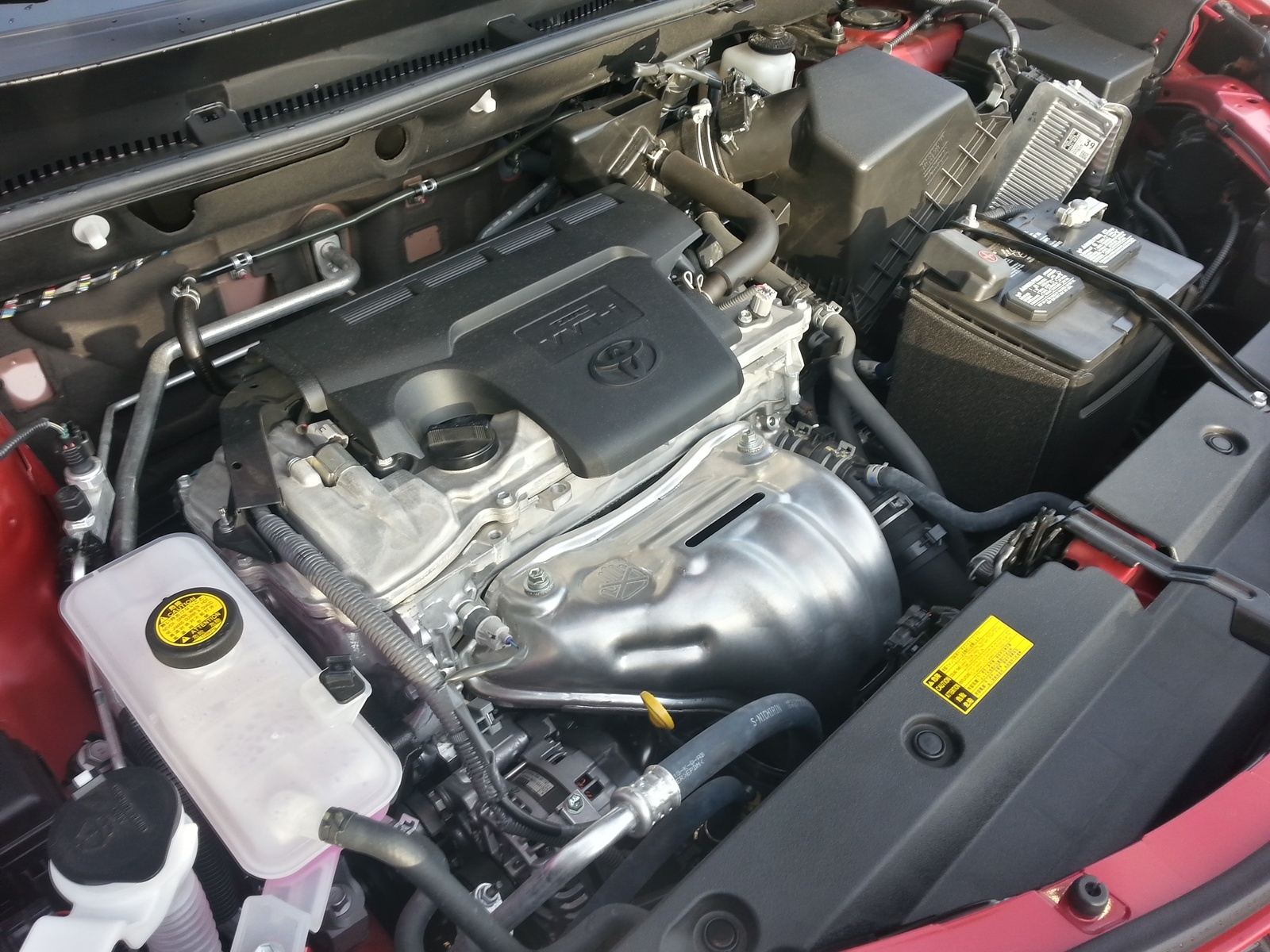 With the deletion of the 269-hp, 3.5-liter V6, the RAV4 is left with a single powerplant, a fully aluminum, 176-hp 2.5-liter inline 4-cylinder (I4). It’s the same engine found in the Camry and Scion tC, fitted with dual variable valve timing and a fully balanced forged-steel crankshaft fitted with 8 counterweights for smoothness and 5 main bearings for durability. Unfortunately, this still means only 176 hp for this 3,500-pound vehicle, and while that normally would be plenty for a grocery-getter such as this, with the efficiency-minded 6-speed automatic in the RAV4, you’ll find yourself wondering whether the accelerator is connected when attempting passing maneuvers.

Mountain roads bring their own unique frustrations, as the transmission seems to endlessly hunt for the correct gear, but in typical commuter and city driving, you should find no issues. Just make sure you don’t harbor any fast or furious aspirations. With AWD the RAV4 is rated at 22 mpg city/29 highway, for a combined EPA rating of 25. Opt for FWD and those numbers get bumped to 24/31, although I had trouble averaging more than 20 over the course of my week with the vehicle, although that did include time with Sport mode engaged. Even still, I was attempting to save gas during my time with the RAV4, and spent just as much time in Eco mode, yet still couldn’t achieve the posted numbers.

The suspension did its job quite well, even with a bit too much communication through the Limited’s 18-inch wheels, and managed tight turns with little drama excepting a slight vagueness and a tendency toward understeer. 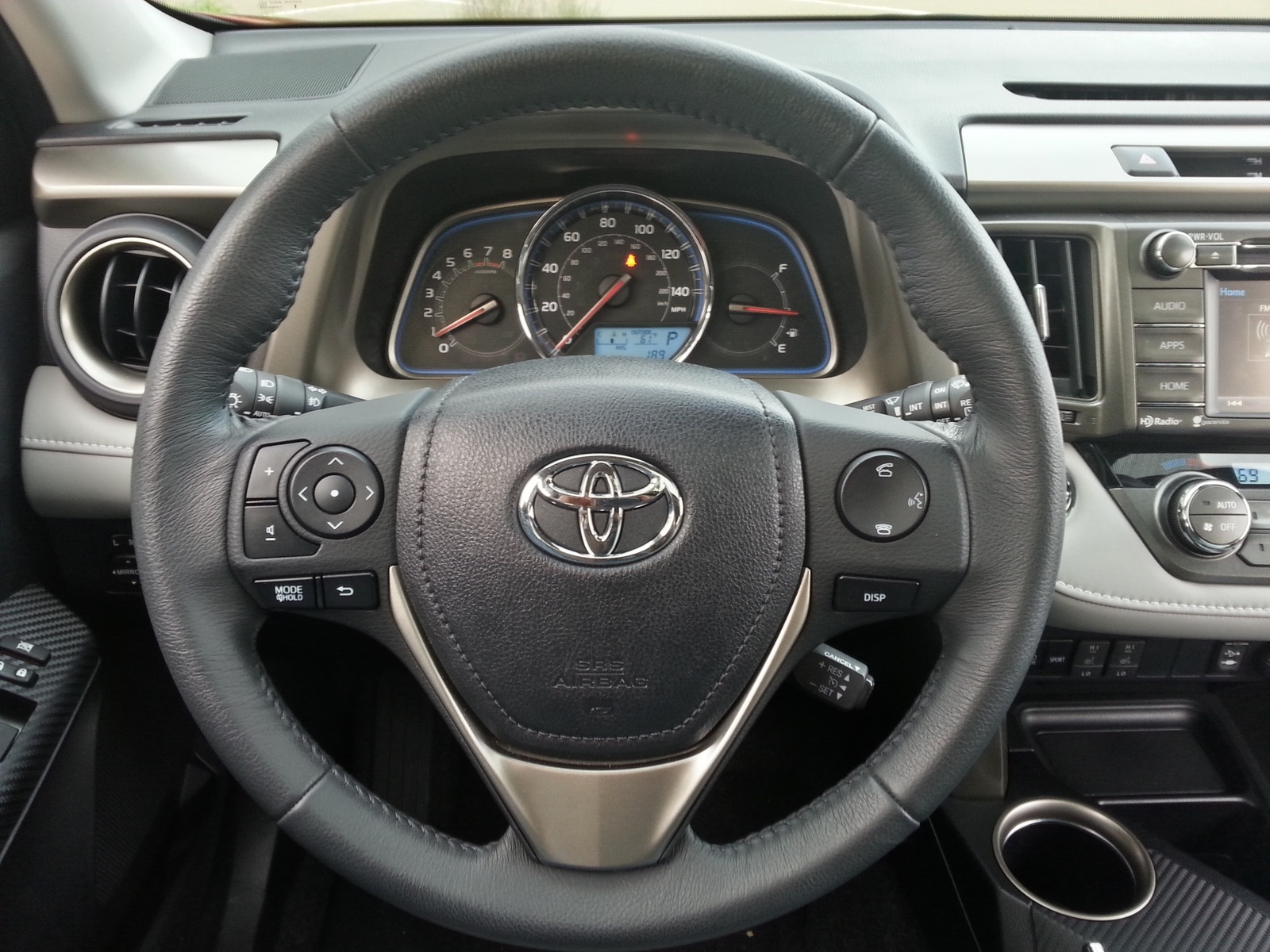 While you can’t expect to snap any necks from roadside gawkers, the RAV4 is still rather attractive, with a smiling front fascia blending into those Camry lights. An integrated rear spoiler on the power liftgate balances nicely with both roof rails and the lines flowing across the side, too. Expect nothing flashy, but this also means it’ll be rare to find someone who dislikes the looks, too.

Inside you’ll find far too much hard plastic and faux carbon fiber trim that looks strangely out of place but not unattractive. A padded leather kneebar is a nice touch, and leather seats look smart in contrasting tones, but are too flat and firm for long distances. However, they offer plenty of room both front and back, even for larger adults on longer trips, especially with reclining rear seats. Finding your perfect position should be no trouble with 8-way power for the driver's seat and a tilt & telescoping leather-trimmed steering wheel with nicely integrated controls.

Where the RAV4 really shines is in its cargo capacity. Now that the third row has been deleted, it offers 36.4 cubic feet of space behind the rear seats, and if you decide to fold them flat, you’ve got 73 to play with. That’s enough to put the RAV4 in the lead for the class and handle nearly any hauling you’re likely to encounter that wouldn’t require hired movers. 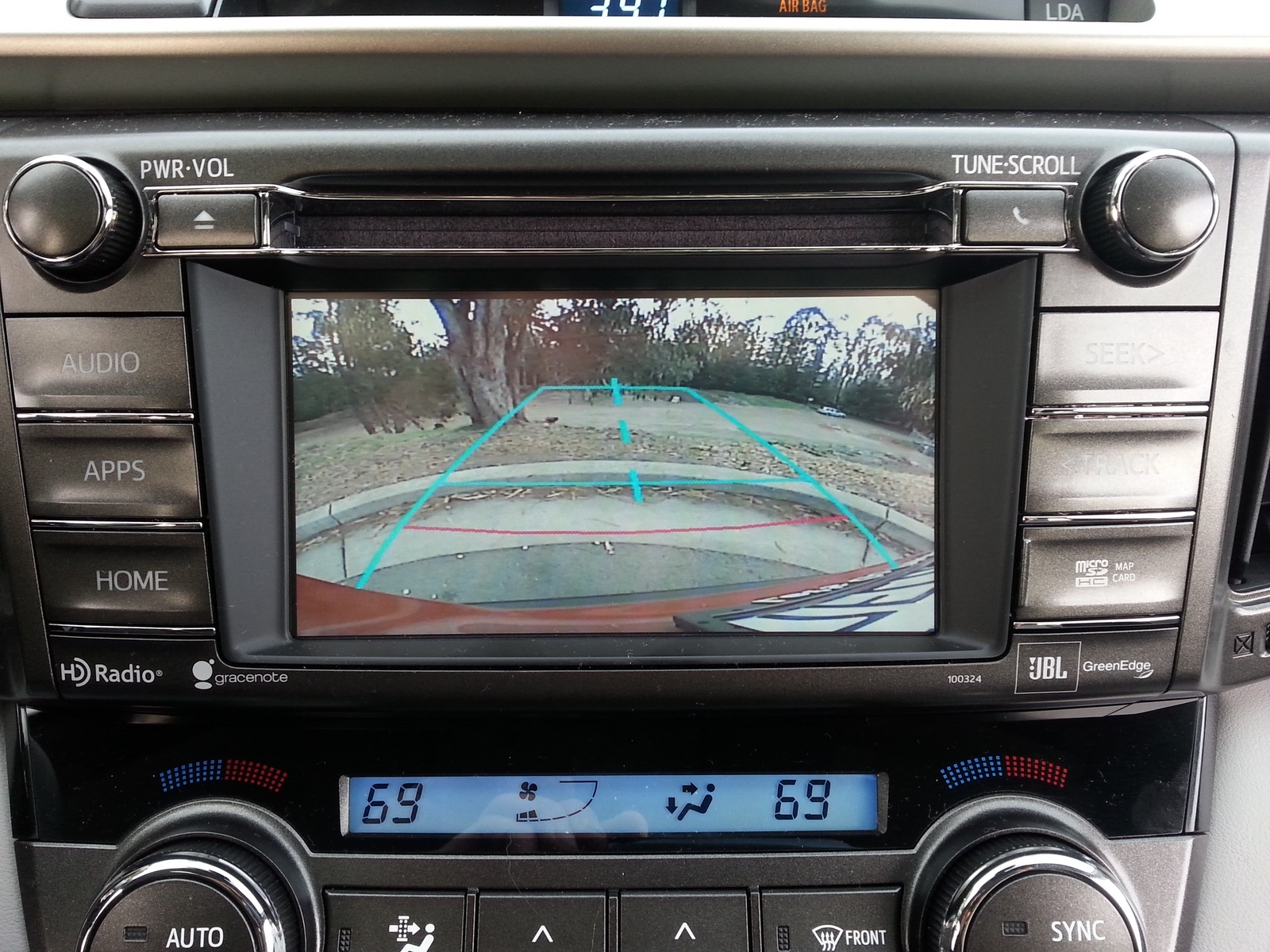 Tech in the RAV4 can be an experiment with frustration, at least with the Limited’s suite of Entune features. While all RAV4 media offerings are branded with Entune, it’s only the Limited trim’s JBL multimedia system that actually gets the full treatment of apps and services. In order to utilize it, you’ll have to download a separate app and connect your phone, and registering for the service requires a data connection. Nothing like paying for extra features that'll cost you extra. Once you’re all set, you’ll have access to Pandora, the Bing search engine and selected news feeds, although since you already have access to all this on your phone anyway…

The screen can be a bit finicky with regard to touch input and washes out nearly completely in direct sunlight, but the navigation operates on par with other systems once you familiarize yourself with it, and the voice recognition didn’t offer any unique frustrations. The buttons to activate these systems on the steering wheel felt a little too cheap for my tastes, however, and ruined what was otherwise a really nice tiller to hold.

The RAV4 isn’t plagued with the usual blind spots of other crossovers, but the backup camera and blind-spot alert systems were still a nice touch to have, if only for a reminder. Lane-departure alert is also handy for longer drives if you’ve a tendency to fall asleep behind the wheel, but it’s a shame these systems are available only on the Limited trim with the Technology Package. Safety should be within everyone’s reach. 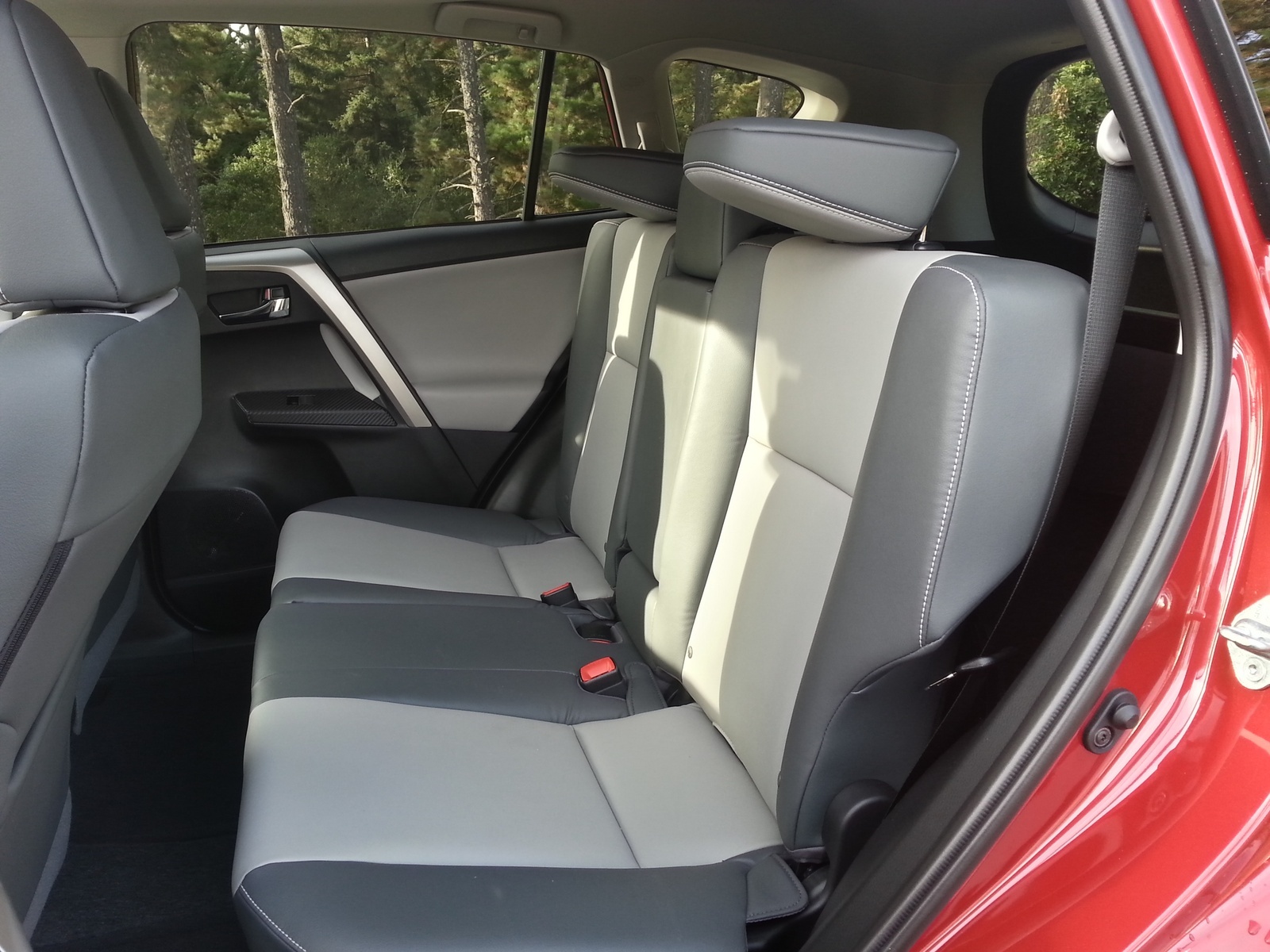 Sadly the RAV4 has some work to do in the safety department, especially in the oh-so-important frontal crashes. While the National Highway Traffic Safety Administration (NHTSA) awarded the RAV4 a 4-star rating out of 5 for frontal crash protection and rollover (and 5 stars in all other tests), the Insurance Institute for Highway Safety (IIHS) gave it the lowest rating of Poor in its small-overlap frontal-offset crash test. However, other tests earned the RAV4 the IIHS’s highest rating of Good, so just avoid frontal collisions and you should be okay.

Braking was unimpressive as well, and testing confirms reported distances of 128 feet from 60 mph and a near-alarming 190 ft from 70 mph. This should be a focus in a family vehicle, if nothing else in the performance department. But otherwise the RAV4 is well-equipped in the safety department, with 8 airbags including full-length curtain and driver's-knee bags, “Whiplash-Injury-Lessening Seats,” and stability and traction control. 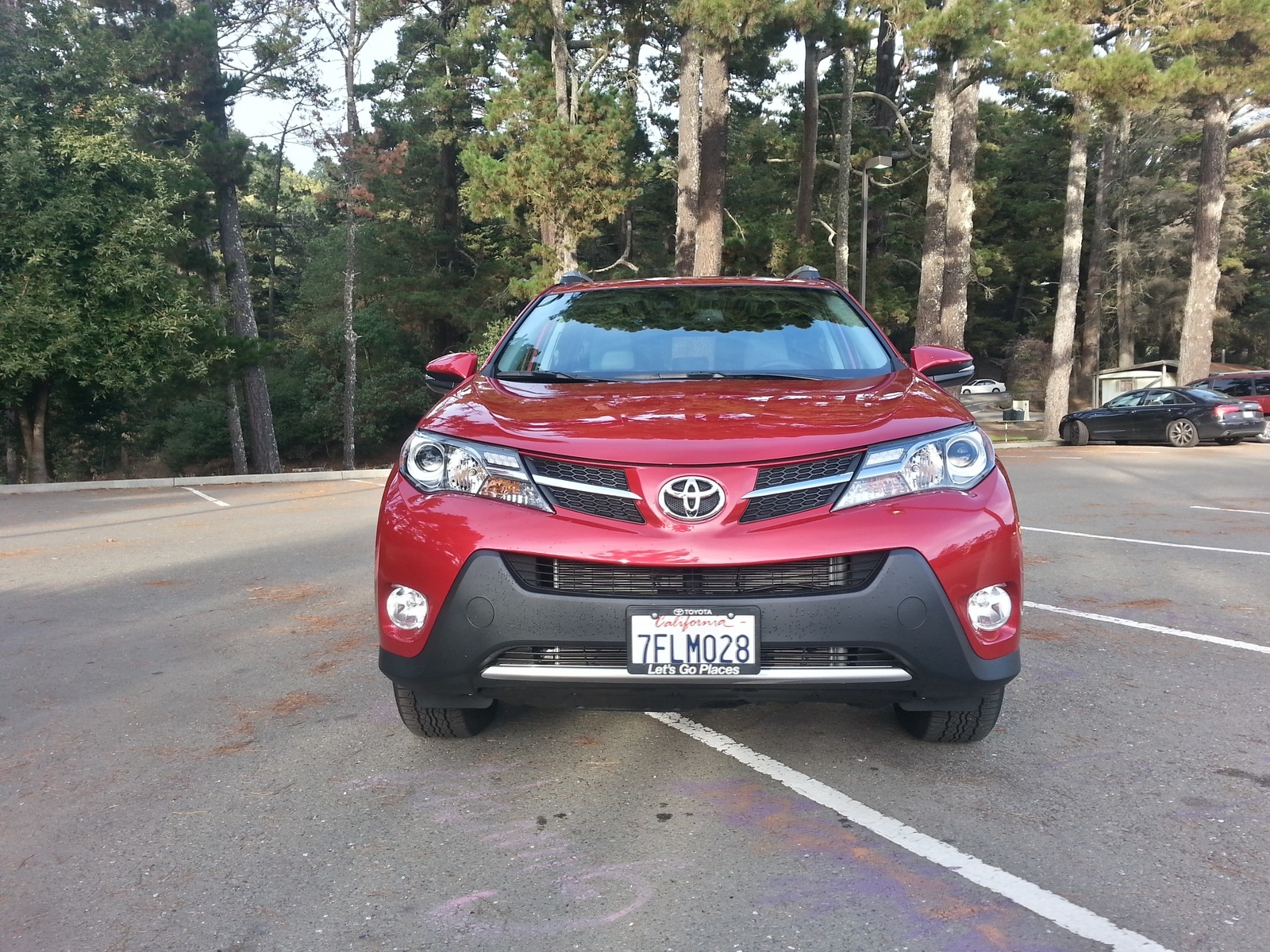 At a base price of $23K, the RAV4 is a good option for a family funster. It’s not flashy or fancy, but it’ll certainly get the job done. As the price rises with trim levels, the bargain starts to fade in the distance, especially as you reach the $30K level but still feel very much like you’re driving a $20K vehicle. It’s the utility of the RAV4 that really makes it stand out in this category with regard to space for both cargo and passengers, but the safety compromises and the lack of power really hurt its stance in the marketplace. This is especially true in the crossover segment, where there’s so much competition, whether you’re looking for something with more aesthetic appeal, performance prowess or luxury.

MH17 I own a 2013 Rav4 limited with AWD purchased mid August 2013, have put just over 16,000K on it with two drives to Florida. Great road car, comfortable with more than adequate power out of the 2.5 litre 4 cylinder. Dash could be better organized with some switches not easily visible under the dash but you get used to it. Have had zero problems with it, it uses no oil between changes every 8000k my only complaint is fuel economy, during the winter uses 11 to 12 litres per 100 in the city and 8.5 to 9.5 on the highway. Enjoyable vehicle to drive and is great in the snow. Would buy another one.

Famone Took the 2014 Limited home from showroom three hours ago...I guess I will never learn all the right questions to ask in the 20 plus years I have been purchasing cars. This is just one more solid disappointment. Thought the Limited would provide all this great technology including the optional 2014 technology package and found that not a piece of all this modern tech works as it should. The computer is so slow you can walk to your destination in the time it takes to load in a destination. The message system is pretty much incompatible with most cellular phones, the doors lock when they feel like and pretty much don't unlock at unless you use the key fob which is not the way it is supposed to work. I don't think anything works on this vehicle the way it should. Back to Toyota with yet another disaster. And I thought my Lexus had problems...the fun hasn't started yet.

Users ranked 2014 Toyota RAV4 against other cars which they drove/owned. Each ranking was based on 9 categories. Here is the summary of top rankings.

Is There Still Problems With The ECM Unit In The RAV4's?

Where Is The 2014 Toyota Rav4 Tire Reset Button?

Hi there! I have my AWD light on since yesterday on a RAV 4 2016 with less than 100000 km. My problem is that I am in France and the Toyota engineers are dumb (I had a small issue with the radio and t...

Our 2014 Rav4 has been a great vehicle...up until the last couple days. For the past two mornings, when my wife has attempted to start the vehicle, with the push button, it has refused to start. I r...

588 views with 4 answers (last answer about a year ago)

I recently got into a minor fender bender resulting in this dent. I’m thinking of taking the panel off of the inside of the car and pushing the dent out myself. Has anyone done this before? How did...

67 views with 2 answers (last answer about a year ago)