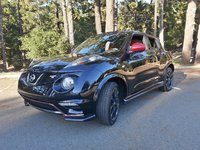 Even with quirky looks, engaging performance and a budget price, the Juke is hampered by poor cargo capacity and disappointing fuel economy. 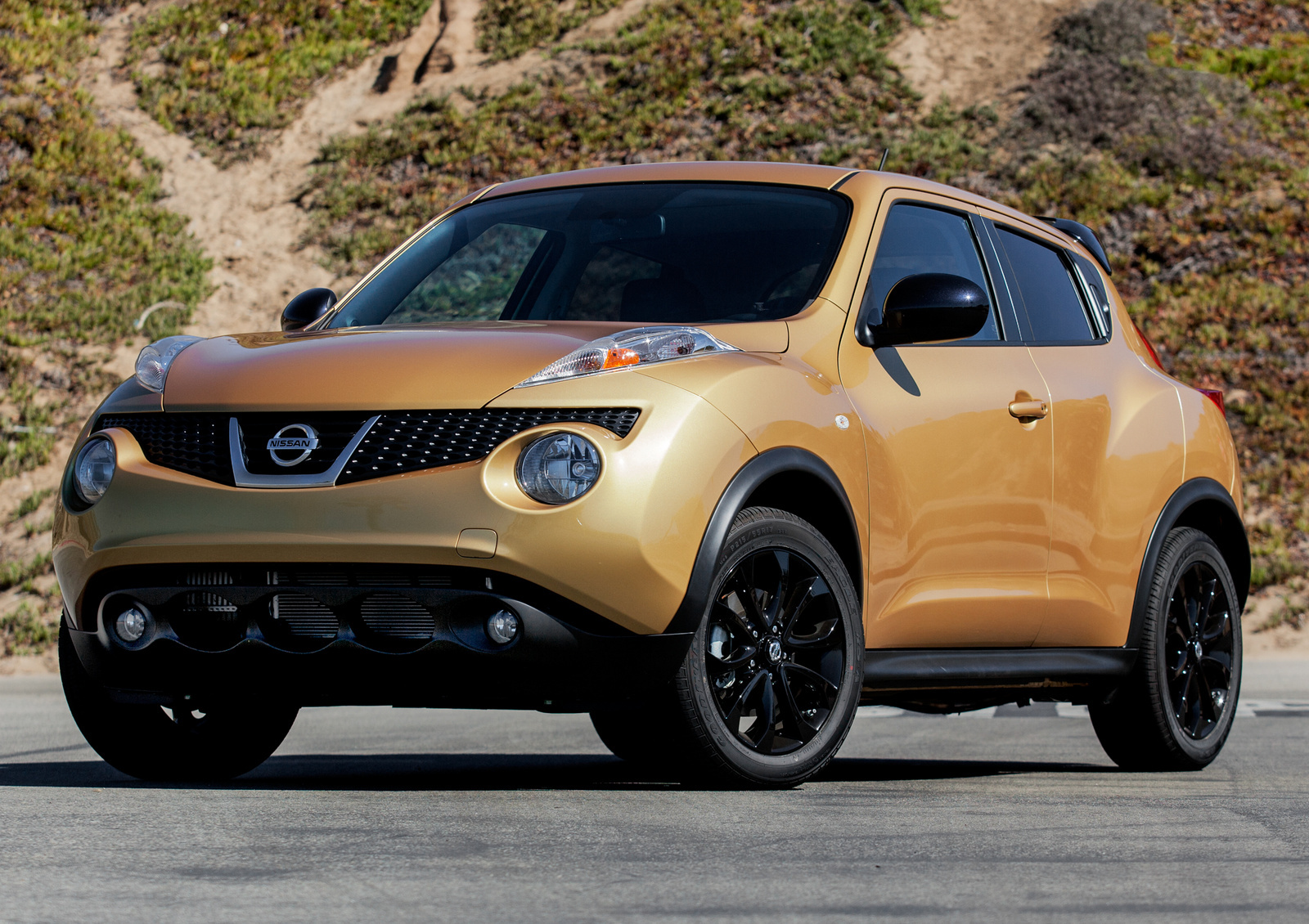 The Juke has been turning heads in appreciation and disgust alike since it debuted in 2010. If you haven’t heard some strong opinions about the Juke yet, you just haven’t been paying attention. Perhaps the epitome of a “love it or hate it” aesthetic, the Juke seems determined to bring some moxie to motoring with lines and proportions more suited to an artist’s portfolio than the usually austere automotive ranks. 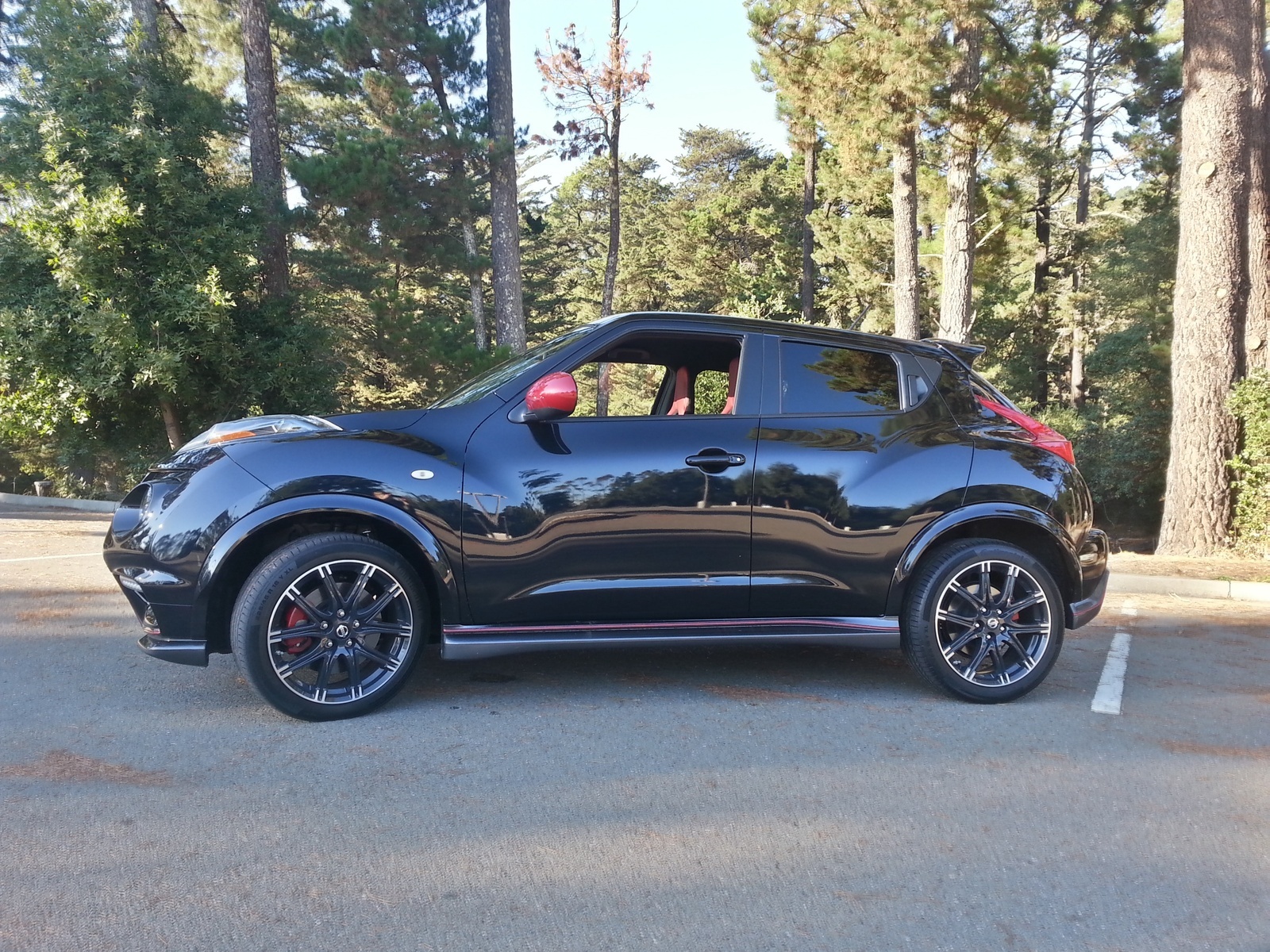 The Juke gives off a definite “Hot Wheels” vibe, with exaggerated flanks and a truncated cabin that make you wonder if the designer skipped the proportions section of his art-school education. But stare a bit longer and the lines start to make sense, throwing subtle darts at the self-imposed limitations of modern automotive design. This car looks like it’s going to star in the next animated automotive feature.

Pushing this idea right to the edge, Nissan sent us a Sapphire Black NISMO RS version of the Juke—with all the aesthetic and performance enhancements that entails. With a premium of nearly $7,000 over the standard Juke (an increase of more than 30% of the base price) the NISMO RS has a lot to prove, rolling in at an MSRP of $26,120. Additionally, this Juke was fitted with the only extras allotted to the NISMO RS: NISMO carpeted floor and cargo mats ($215) and the Navigation Package ($1200), which added NissanConnect, a 5.8-inch touchscreen, voice recognition, a rear-view monitor and a Rockford Fosgate sound system with USB connection. 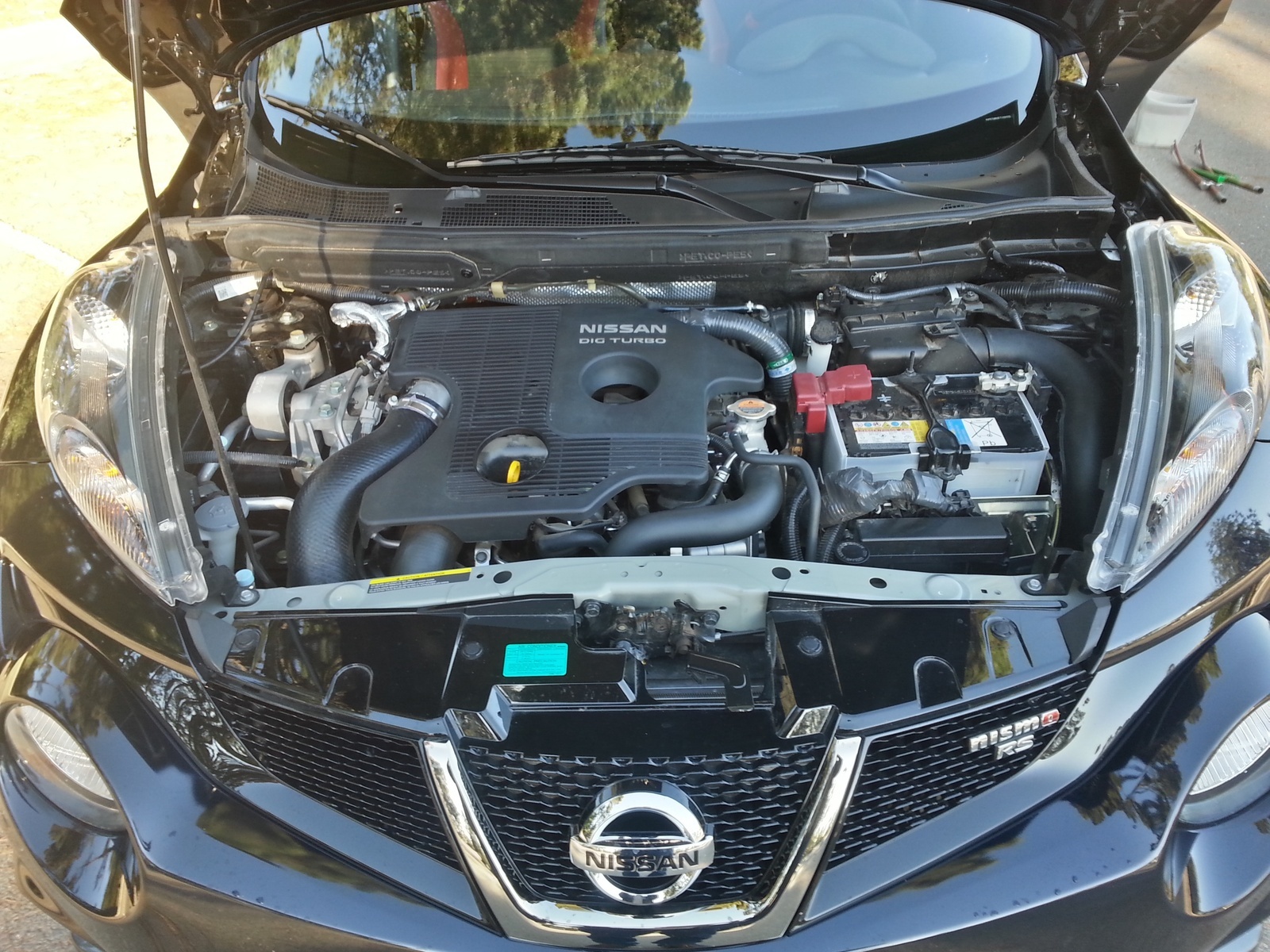 The Juke gives you some options with regard to performance, although some will leave you wanting. At the base level the Juke starts with a 188-hp, 1.6-liter turbocharged 4-cylinder, sending 177 lb-ft of torque to front or all 4 wheels, depending on configuration. You have the choice of a continuously variable transmission (CVT) or 6-speed manual, but if you choose the latter, you’ll have to settle for front-wheel drive. This is a confusing arrangement, as the all-wheel-drive setup forgoes the standard torsion-beam rear for an independent suspension. Paddle shifters and 8 “virtual” gears for the CVT toss a nod toward performance, but why penalize those who like to row their own? Criticism aside, this was one of the nicest manual transmissions I’ve driven in a while. Kudos to Nissan for paying attention where it matters.

In stock form the Juke actually motivates quite well, jumping to 60 mph in a tested 7.3 seconds, but if that’s not fast enough, the NISMO version will add 9 hp and 7 lb-ft. Sadly, most reviewers have failed to notice much of a change with regard to performance with this edition. The NISMO RS edition I drove around for a week adds a significant punch to the base package, with 27 added hp and 33 extra pound-feet for a total of 215 hp and 210 lb-ft. This gain was achieved mostly through ECU massage and the addition of a free-flowing sport exhaust, but to handle the extra oomph, the powertrain was fitted with heavy-duty connecting rods, a dual-mass flywheel and a strengthened clutch cover.

The NISMO RS also adds 18-inch alloys with summer tires, a sport suspension, larger vented brake rotors, a retuned manual transmission with shortened gears for the first three cogs and a helical limited-slip front differential. By the classic “seat of the pants engineering survey,” most of the difference is felt thanks to the transmission changes, which make standing starts a lot more hurried, but if you’re not careful you’ll be greeted with more torque steer than should be allowed through a LSD, which almost had me careening into the line of parked cars more than once. Sounds scary, but it’s just the sort of fun that should be had with an RS vehicle.

Lean on it hard enough, and you can even chirp the tires through a few gears, although once the rain hit, those summer tires decided wet traction was above their pay grade. Steering and suspension, two highlights of the standard Juke, were even better here, although the riding on rough roads would get tiring quickly with the stiff springs of the Juke. And with a Sport button just sitting there on the console, calling for you to push it, things get tighter still. Thankfully the NISMO RS was also fitted with Recaro race buckets that held you in place no matter how hard you juked the Juke. 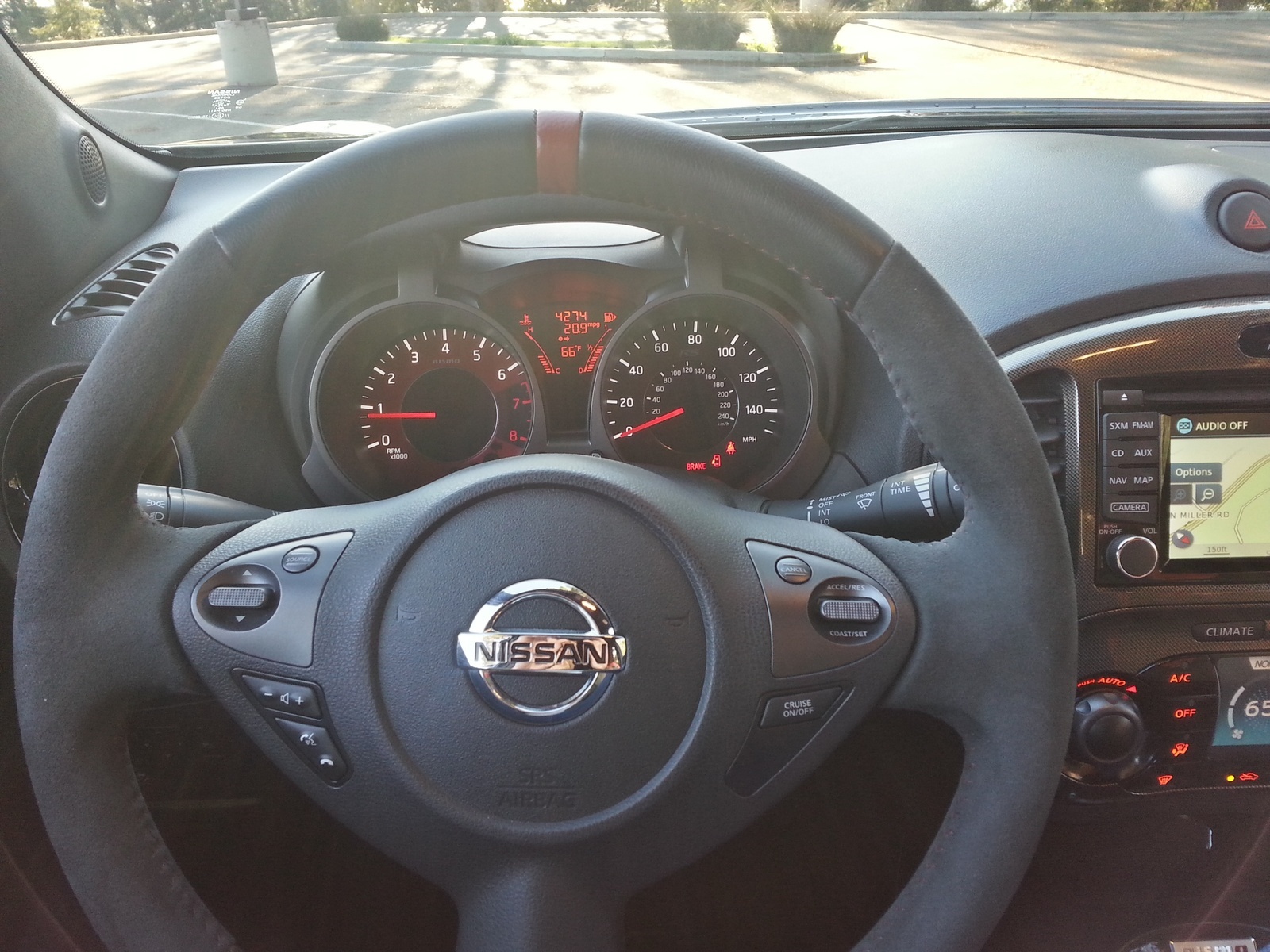 Undoubtedly the area where the Juke has received the most attention, the form of this compact crossover has attracted enthusiasts and detractors in equal proportion. Personally, I think it’s silly to get offended by a car’s looks (Porsche Panamera aside), especially when no one is forcing you to buy it. It’s certainly quirky, but I enjoy the bulging fenders and shrunken cockpit, even if the resulting blind spots are a tad tedious.

The NISMO RS touches only made things better (or worse, depending on where you’re sitting) with a redone front and rear fascia, color lines with matched mirror covers, LED running lights and an aero package. The suspension drop really helped the profile, and the 18-inch wheels filled the wells perfectly. The Recaro race buckets were an interesting addition here. I understand the intent, but I wonder who they think will be buying this trim. Even my slender frame barely fit into the seats, and I can’t imagine anyone even a few pounds wider finding them very comfortable.

What was nice was the faux-suede insert on the seats, around the steering wheel and over the gauge hood, all with contrast red stitching. Gaudy for sure, but just the right amount. Chrome door handles looked out of place, but they were my only complaints here. The rest of the cabin was adorned with fake carbon-fiber accents around too much hard textured plastic—a reminder of the price point.

Don’t expect a wealth of room in the back seat, but there’s certainly enough for a couple of adults, and with the seats flat there’s room for a chair and two end tables sourced at a local flea market. For those who prefer numbers, that’s 10 cubic feet with the seats up and 36 with them down, about half of the class leader's capacity. 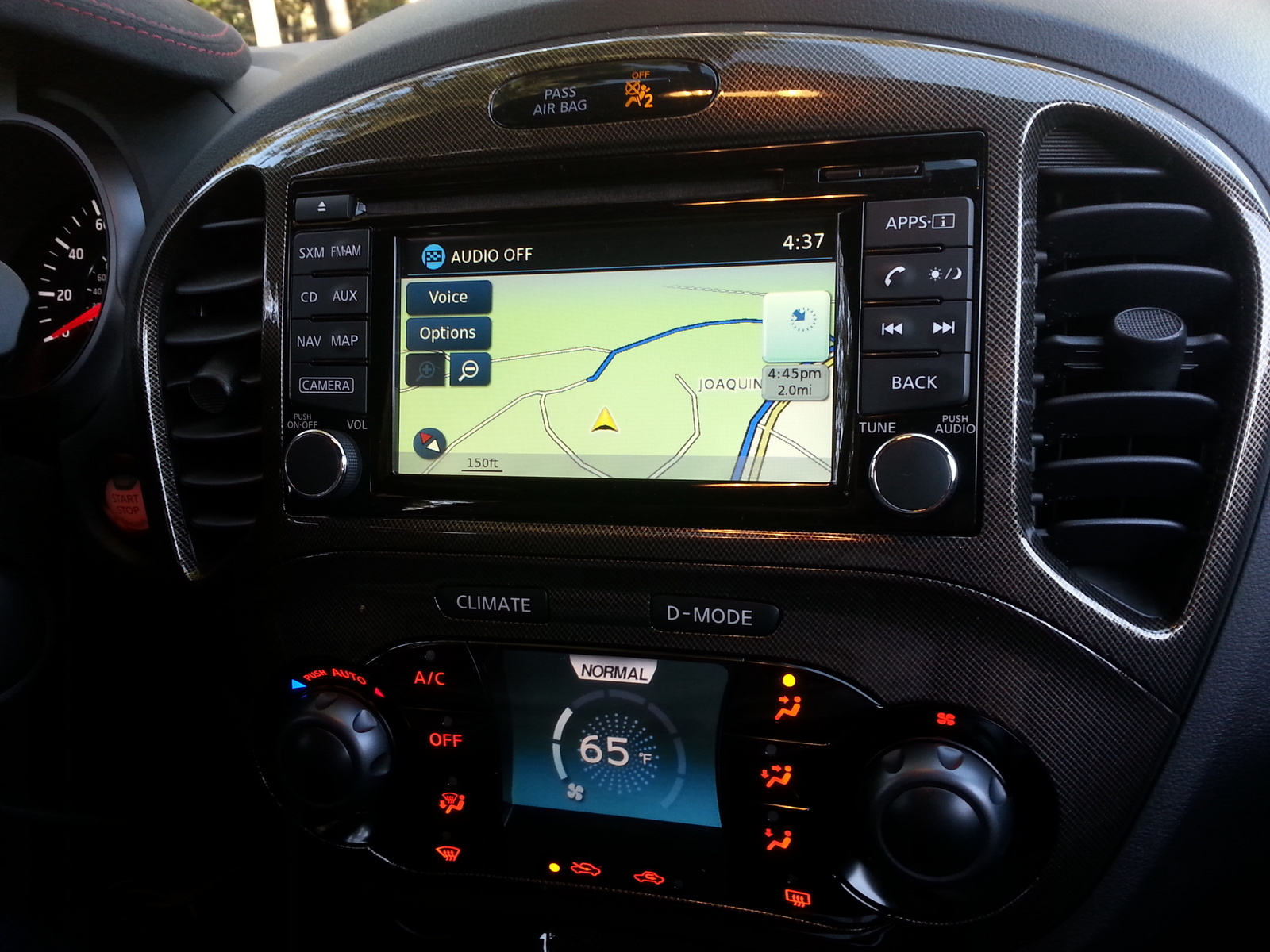 Tech-wise, the Juke can go from sparse to savvy depending on the trim you choose. At the base S trim level, you’ll still have to deal with an actual turn-key start—a feature that’s rapidly feeling archaic—but you’ll still get keyless entry, full power, Bluetooth and a 6-speaker stereo with an auxiliary input. The SV trim does away with such antiquated notions as keys altogether and offers push-button start, satellite radio and the I-CON system to manage the automatic climate control and vehicle drive modes. Sadly, it sits too far for easy glances at the torque, boost and economy readouts that it displays, not that any of them have actual objective metrics anyway.

The SL trim adds heated seats and automatic head- and foglights, while the Navigation Package offers the 5.8-inch touchscreen with voice recognition, rear-view camera and real-time traffic monitoring. The voice-recognition and navigation work about as well as any other system—“not ideally,” but they’ll get the job done. Of more importance is the Rockford Fosgate upgraded stereo with USB connection. It really handles volume well, and the 8-inch subwoofer in the rear allows you to be as annoying with the bass as you could possibly want. Unfortunately, the volume button on the console controls was broken on my particular vehicle, but the steering-wheel-mounted controls worked just fine. However, I kept hitting the Channel Up button on the wheel while making a turn, which proved frustrating and slightly dangerous. 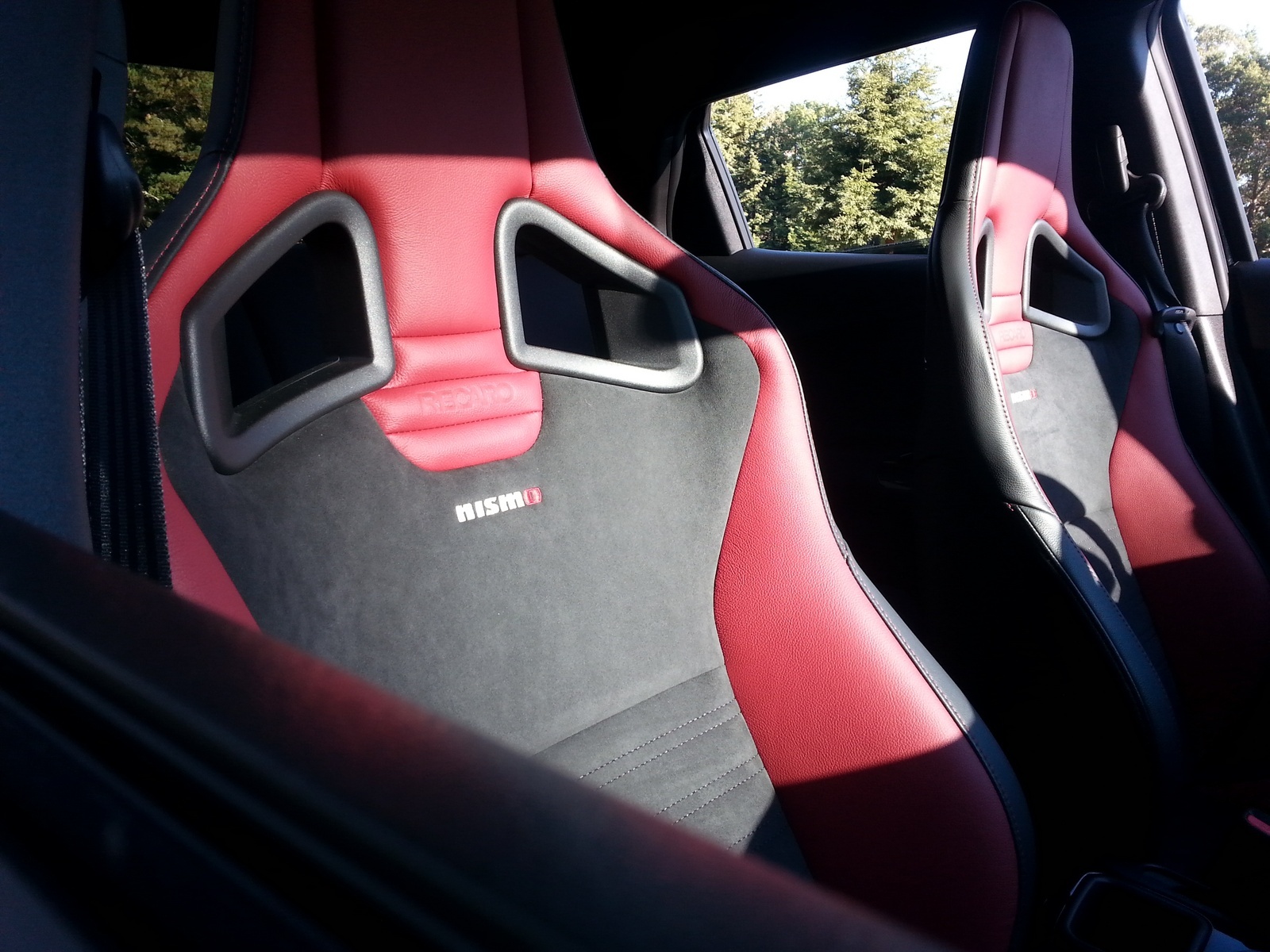 Here’s where things get iffy for the Juke. While safety features like 6 airbags, antilock disc brakes, stability and traction control, and even active front head restraints all come standard, the safety ratings from the National Highway Traffic Safety Administration (NHTSA) point out some flaws. A 4 out of 5-star rating for overall crash protection isn’t worrisome, but a 3-star rating for total frontal impact protection is. Perhaps this is a drawback of that funky shape up front? It should be noted that the 3-star rating for frontal impacts is based on a 4-star driver and 3-star passenger rating. Side impact received a much better score of 5 stars, and the Insurance Institute for Highway Safety (IIHS) awarded the Juke its highest rating of Good.

Braking distance from 60 mph in the standard Juke was average for the segment at 123 feet, but the NISMO trims with their upgraded brakes and performance tires did the same deed in a more impressive 114. 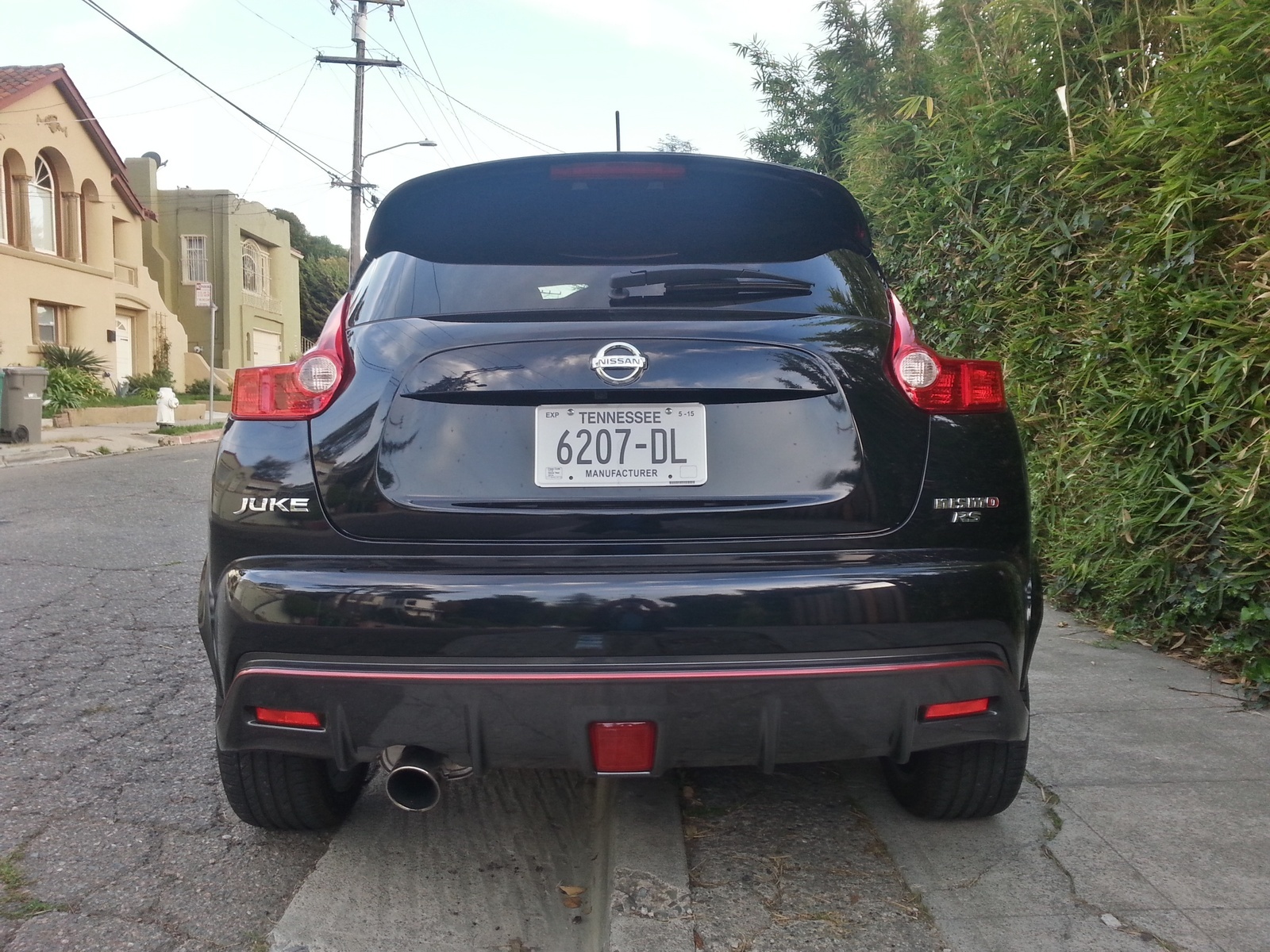 It’s hard to argue that a $19K Juke wouldn’t be cost-effective, but the safety rating and lack of cargo space do a good job of presenting that side of the discussion. When the main purpose of your vehicle is safe family transport and cargo space, doing poorly in either of those categories is not a good idea. However, this speaks to the truly unique space the Juke is trying to occupy. Nissan’s target demographic with the Juke was urban males, 18-34, making at least $45k. It seems to have missed the mark, as the Juke has been culturally branded as a “chick’s car.” In fact, I had two women stop me in parking lots to tell me how much they love their Juke, and both were significantly older than the target demo. For a woman who no longer needs to haul around a family, this seems quite cost-effective.

Adding $7K onto the sticker price for the NISMO RS version is harder to justify. Sure, it’s fun and funky, but there are sportier cars to be had for that price. None of them would be able to haul furniture, however. Perhaps most frustrating is the Juke's fuel economy. Rated at 25 mpg city/31 highway, I averaged just above 17 mpg over the course of a week, albeit with a slightly heavy foot. Even when dropping into Eco mode and taking it easy, I could rarely touch 20 mpg, and that will start to seriously impact your fuel budget every week.

Don This 78 year old ex gear head loves the exterior and doesn't fit all that well in the interior. Availability of FWD throughout the line should be a must if only for a better price point. I bought my significant other a white one and it lives up to the description of a "chicks car."

Users ranked 2014 Nissan Juke against other cars which they drove/owned. Each ranking was based on 9 categories. Here is the summary of top rankings.

Have you driven a 2014 Nissan Juke?
Rank This Car

How Do I Get An Instant Offer

How do i get an instant offer to sell. I have my car listed but do not see a way to do this

On The Instrument Panel Of My 2014 Juke SL AWD Is A Dot With An Arrow Point...