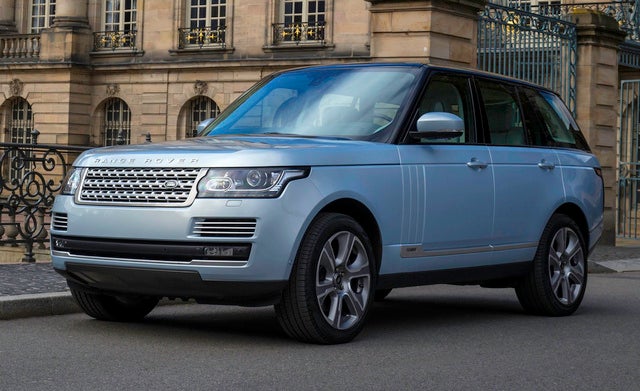 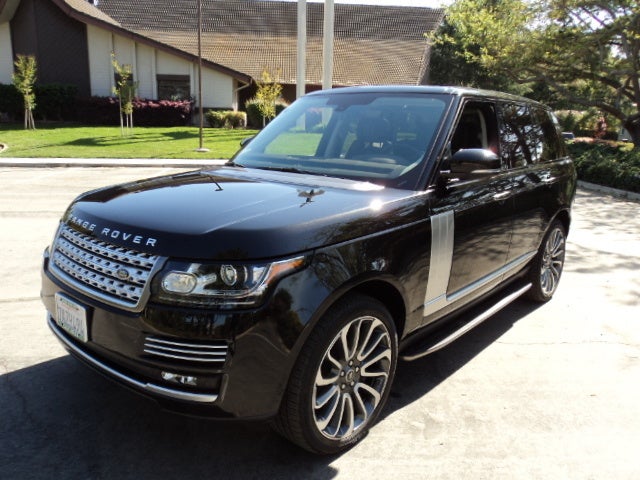 After giving its flagship Range Rover a major redesign in 2013, it would have been natural for Land Rover to roll out the same vehicle for 2014, but that's not exactly what happened. The 2014 Land Rover Range Rover comes with a new base engine that's more fuel efficient, some added technology to help further increase efficiency and a new high-end trim.

The 2013 changes began at the foundation with an all-aluminum body that cut anywhere from 400 to 900 pounds off the vehicle's weight, depending on trim level. That change increased fuel efficiency and acceleration, yet didn't affect Range Rover's on-road handling, which remained remarkably nimble and responsive, thanks in part to an active air suspension system (updated in 2013) and an 8-speed transmission that was introduced last year as well.

The Range Rover's off-road handling also received an upgrade in 2013 with the available Terrain Response 2 system, which added an automatic mode allowing the driver to switch between multiple surface types—General, Grass/Gravel/Snow, Mud/Ruts, Sand and Rock Crawl—with the twist of a knob. The wading depth, ground clearance and angles of approach and departure also increased last year for those who need to travel far off the beaten path. The 2014 Range Rover retains those upgrades and its handling and safety are also enhanced with permanent 4-wheel drive on all models as well as Dynamic Stability Control, Electronic Traction Control, Roll Stability Control and electronic power-assisted steering.

Both engine options in 2013 were V8s, but the 2014 model comes with a supercharged 3-liter V6 in the Range Rover (base) and HSE trims. Like all of the 2014 Range Rover models, this new engine is still paired with last year's updated 8-speed automatic transmission. The new V6 delivers 340 horsepower and 332 lb-ft of torque and gets an estimated 16 mpg city/22 highway, an uptick of about 2 mpg in both categories over last year's Base and HSE standard engines. That mileage should stay at 16/22 even in heavy city traffic thanks to the new start/stop technology that decreases idling in stop-and-go traffic. If you still want the V8, it comes standard in the Supercharged and new Autobiography trim. The engine is a 5-liter supercharged beast that produces 510 horsepower and 461 lb-ft of torque and gets 13/19 mpg.

The exterior and interior underwent 2013 redesigns that were well-received and maintained Range Rover's status as an elite SUV. The vehicle became more aerodynamic (with an eye, again, toward increased efficiency), but retained its trademark boxy lines. The technology and materials were updated in the cabin, keeping the Range Rover feeling like a luxury car with off-road capabilities. All those improvements carry over to 2014, although the optional Autobiography package available last year has become it's own trim this time around. That top-of-the-line trim features executive 4-passenger seating, 4-zone climate control, a front center console cooler, illuminated tread plates, configurable ambient lighting, rear seat entertainment system and a 1,700-watt, 29-speaker Meridian sound system.

The Base trim doesn't get all that luxury, but it's hardly Spartan. Standard features include automatic Xenon headlamps with automated leveling and power wash, heated and power-folding exterior mirrors with memory, leather seats, a heated leather steering wheel, 3-zone climate control, hard disk navigation, Bluetooth, an 8-inch touchscreen to control the infotainment systems and a 380-watt Meridian sound system. If you want a few more gadgets or luxuries, but don't want to spend the $136,600 for the Autobiography trim, you can choose from the HSE or Supercharged trims.

All 2014 Range Rover models come with airbags and restraint measures for every occupant, including side airbags for the second row, and side, seat-front, thorax and pelvis airbags in the front. Other safety and security features include an Active Speed Limiter, power operated child locks, automatic hazard lights under heavy braking and a perimeter alarm with engine immobilization.

What's your take on the 2014 Land Rover Range Rover?

Users ranked 2014 Land Rover Range Rover against other cars which they drove/owned. Each ranking was based on 9 categories. Here is the summary of top rankings.

Have you driven a 2014 Land Rover Range Rover?
Rank This Car

How Can I Find My Add And Make Changes

how can i make changes in my add

This Car Was Sold Over 2 Weeks Yet Deal Keeps It On Their Site To Inquire A...