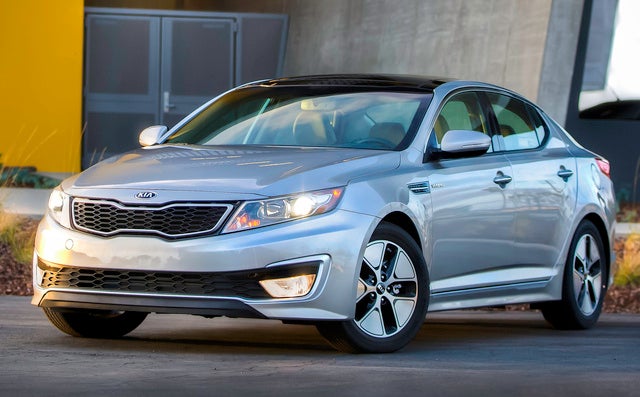 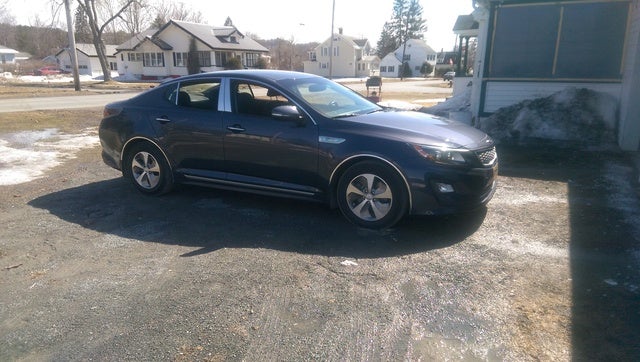 While there’s been no official word, we can reasonably assume that the 2014 Kia Optima Hybrid will receive at least those subtle upgrades to sheet metal and cabin appointments that are ballyhooed for its non-hybrid sibling. Otherwise, this 5-passenger gas/electric midsize sedan keeps on truckin’ with a battery pack that was updated in 2013, as well as a few tweaks to a hybrid powerplant that also debuted in the 2013 edition.

Trims are, as of now, expected to remain the base Optima Hybrid LX and the upscale EX, though a shuffle has been instituted for the non-hybrid Optima trim lineup that may trickle down to the Hybrid offerings. Thus, such added amenities as LED foglights and taillights will doubtless come along for the ride. Meanwhile, this lithe 4-door should continue to offer a handsome alternative for the family, with unexpectedly upper-crust features that belie the automaker’s somewhat humble beginnings. Its 10.8 cubic feet of trunk space, alas, might be a bit of a letdown, as will the lack of truly neck-snapping power, but the slower pace might allow bystanders to get an eyeful of the Optima Hybrid’s beauty, while fill-ups should take less and less out of the family budget.

Anyhow, look for the retuned variable-valve-timed (VVT) 2.4-liter gas/hybrid inline 4-cylinder (I4) engine to make a return, and to once again mate with a 47kW electric motor to put out a total of 199 hp. Again under the management of the standard 6-speed shiftable automatic transmission, the gas/electric system is geared to offer power from the electric battery alone for short distances, as well as regenerative braking to juice up the battery, and auto stop-start technology that saves idling your gas away. Oh, and the new lithium polymer battery weighs only 91 pounds while putting out a shocking 270 volts. Altogether, this works out to an estimated 36 mpg city/40 highway.

Standard appearance goodies found in the entry-level LX should again include 16-inch alloy wheels, heated power-adjustable outside mirrors and a rear spoiler, while cloth upholstery, full power accessories, a leather-wrapped steering wheel and simulated alloy cabin bling is expected to remain adorning the interior. Additionally, cruise control and telescoping tilt-wheel steering should return for the 2014 Optima Hybrid LX, as should the standard rear-view camera, the cooled storage compartment and Bluetooth hands-free calling. Entertainment, meantime, looks to include once again a single-CD/MP3 player with 6 speakers and USB-interfaced auxiliary iPod input.

The 2014 Optima Hybrid EX, as befits its elite status, is expected to retain 17-inch alloy wheels and a power sunroof outside, with heated power-adjustable front seats, driver's memory settings and an auto-dimming rear-view mirror again adorning the interior. And let’s not forget the universal remote garage door opener and the standard Infinity audio system with its 8 premium speakers, or the traditional voice-activated navigation system bearing real-time traffic info. Also expect 2013’s updated and upsized touchscreen displays to make a return in the flagship 2014 EX.

Again this year, the LX is expected to gain several of the items found standard in the top-shelf EX as options, while both trims can be accessorized with added cargo management tools and carpeted floor mats.

What's your take on the 2014 Kia Optima Hybrid?

Mark great car. gonna get me one :)

lml2476 Bought a Kia Hybrid (2014). Our trips so far have proven how great the car rides and handles. It has over 1500 miles already with no surprises. Lots of power for the hills. Bad feature is front passenger seat has no adjustments. Had to buy special cushions. This should be addressed.

Users ranked 2014 Kia Optima Hybrid against other cars which they drove/owned. Each ranking was based on 9 categories. Here is the summary of top rankings.

Have you driven a 2014 Kia Optima Hybrid?
Rank This Car

I just got this car maybe 5 days ago and I've had the system message pop up about 3 times now. It's a used car but with barely any miles on it. It first happened on my way home on the freeway and I...

29 views with 1 answer (last answer about a month ago)

How To Update Title Names

my title only has my name on it and i marked that it has two, how do i change that. It looks like the potential buyer and I are getting close to an agreed upon price and I want to make sure we don'...

Looking at buying a 2014 Kia Hybrid, but being told the warranty for second owner is 5/60,000 on hybrid battery. Can anyone officially confirm or deny that the 10/100,000 Kia hybrid battery warran...

I've replaced my battery about 2 months ago because my fuse keeps blowing out. I think I'm about to have the same problem because my system lights came on telling me to stop my car and cut it off....

My car has blown a fuse twice within a month. Now I have no power at all in my car. But I notice I feel a vibration on the brakes when I try to crank my car back up. I sent it to the dealership but...