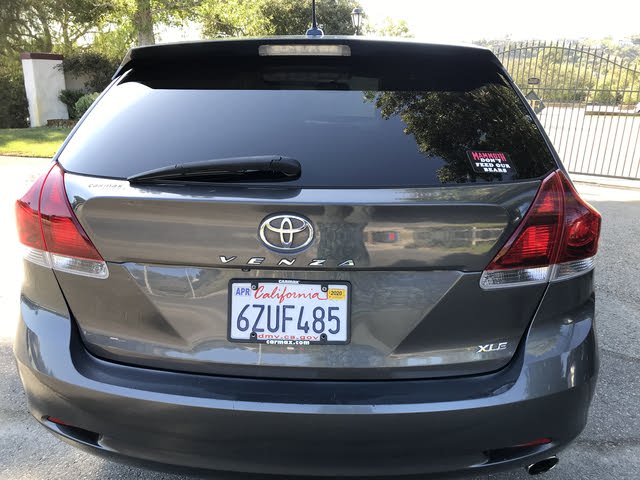 If the Toyota Venza had been introduced 10 or 15 years ago, it would have been the Toyota Camry wagon, as they share a frame, but that was way before the era of crossovers and SUVs. The 2013 Toyota Venza is a not-quite-an-SUV-but-more-than-a-station-wagon vehicle. It's perfect for the driver who needs more space and height than a car can provide but is just not ready for a crossover or an SUV. The Venza begs to be driven and treated like a car, not like an SUV, even with its increased height and clearance. It is strictly an on-road vehicle designed to provide more room in a smaller, easier-to-handle package. The Toyota Venza also keeps to its more car-related roots by providing only front and back seats, lacking the third row of seating available in larger crossovers and SUVs. Since its debut in 2009, it has not seen any major changes, but for 2013, there will be some cosmetic changes. Some of these slight exterior changes include an updated grille, redesigned taillights and a new pattern for its 19-inch wheels. The 2013 Toyota Venza will also be available in three new exterior colors; Attitude Black, Cypress Pearl and Cosmic Gray Mica, as well as an additional interior color.

The powerplants for the 2013 Toyota Venza remain the same as were available in the 2012 model. Still available are a 2.4-liter 4-cylinder and a 3.5-liter V6, with each offered in front-wheel-drive and all-wheel-drive configurations. The 2.4-liter engine produces 182 hp with an EPA estimated fuel mileage of 21 mpg city/27 highway and has a standard towing capacity of 1,000 pounds. The V6 offers 268 hp, but fuel economy suffers when adding the all-wheel-drive option, bringing it down to 18/25. The V6 does offer an available towing package that increases towing capacity to 3,500 pounds.

For the 2013 Toyota Venza, there have been no changes or upgrades to the suspension or handling components. The 2012, although taller in stature, provided a more carlike ride than that of a larger vehicle. For 2013, a rigid L-arm-type MacPherson strut and a stabilizer bar provide the front suspension, while the rear suspension consists of a dual-link MacPherson strut system with a stabilizer bar as well. Electric power steering (EPS) gives a more direct steering feel during both low- and high-speed driving.

The major interior components of the 2013 Toyota Venza will remain unchanged as well. It offers ample room for 5 adults as well as a decent amount of cargo space. What will be new for 2013 will be the addition of the Entune multimedia system as well as a premium 13-speaker JBL sound system and an updated navigation system. The interior of the 2012 seemed a bit sparse with too many plastic components, but it is unknown if that has been changed for 2013.

The 2012 Toyota Venza was an IIHS Top Safety Pick, and with no changes in the airbag or safety features of the 2013, this is not expected to change. The Venza features 7 airbags, including driver's and front-passenger side airbags, driver’s knee airbag and front and rear side-curtain airbags in addition to the standard front driver and passenger restraint system. Every Toyota model comes equipped with a variety of safety features such as vehicle stability control, traction control, antilock brakes, brake assist and Smart Stop Technology.

AmmoP I have had mine for three years. I love love love it. It can carry a toddler and two good sized adults in the back seat. And the trunk area is quite large. It handles WV curvy roads well and rides quietly. My dealership has sold quite a few if them, and everyone I know loves theirs too.

Users ranked 2013 Toyota Venza against other cars which they drove/owned. Each ranking was based on 9 categories. Here is the summary of top rankings.

Have you driven a 2013 Toyota Venza?
Rank This Car

any problems at any time of ownership

Dash Lights Not Working When Driving Lights On.

Why won't my dash lights come on when headlights are on?

I live in Georgia and want to get a car at California. What security do I have if I send money for the car be shipped to me. Please advice

119 views with 1 answer (last answer about a year ago)