This is a strong V6, often feeling more powerful than its horsepower and torque ratings might suggest. 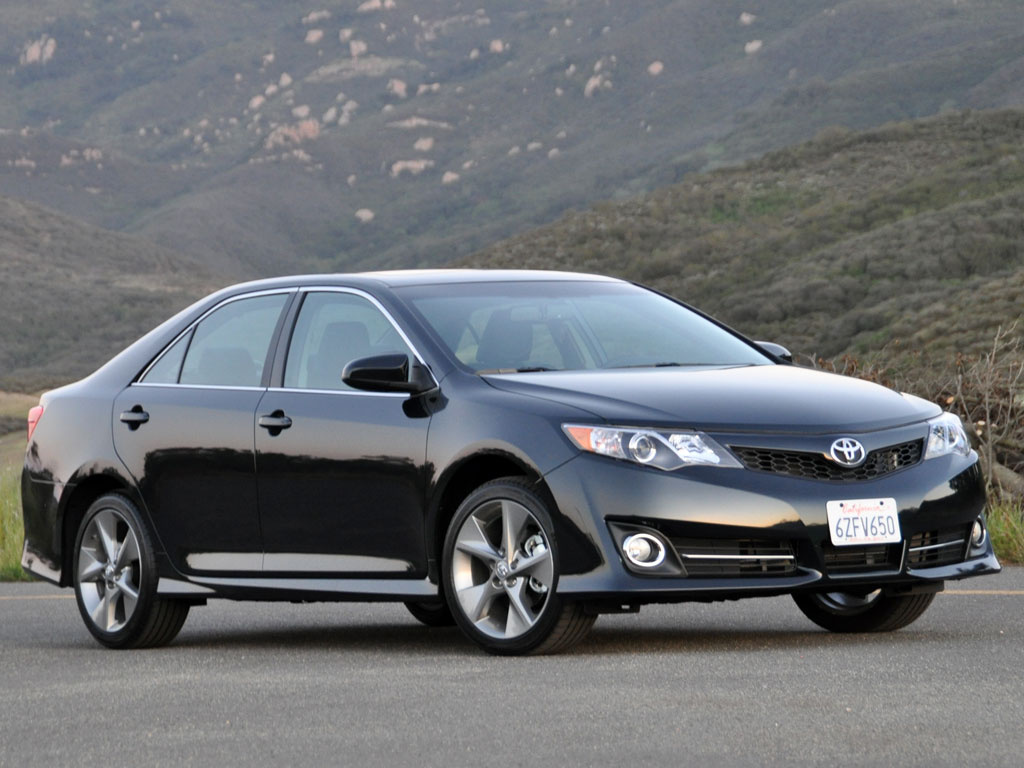 Just one year after a complete redesign, the 2013 Toyota Camry is already a senior statesman among midsize sedans. Facing increased competition, the best-selling family car suffers from staid styling, uninspired interior materials and safety-related quandaries. But in SE V6 format, the Camry remains roomy and comfortable, proves quick and entertaining, and comes with free scheduled service for 2 years or 25,000 miles. 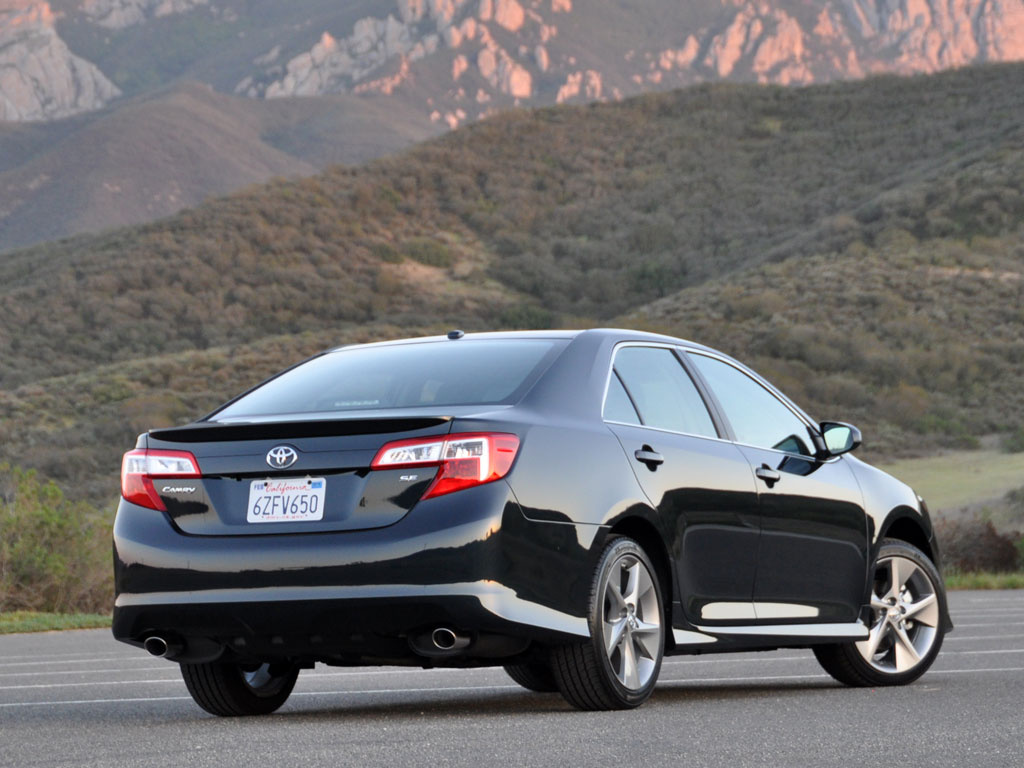 We test drove the sport-tuned Camry SE V6 model, which is equipped with a sport suspension, a strut tower brace, a trunk-mounted structural brace, 18-inch aluminum wheels with more aggressive 225/45 tires, dual exhaust outlets, paddle shifters for the transmission and silver interior trim. On the outside, the Camry SE has a unique appearance not shared with other Camry models: body-color exterior trim, darkened headlight bezels, a mesh grille insert, a lower body kit and a rear spoiler.

Among Camrys, the Camry SE V6 is the most attractive. It loses the chrome moustache grille seen on other trims, and the gray 18-inch aluminum wheels combined with other styling changes unique to the SE version definitely give the car much needed presence. Generally, however, the latest Camry appears to have adopted a paper airplane approach to design, all creases and angles and points. This might be great for reducing aerodynamic drag and increasing fuel economy, but it translates to bland anonymity on the road. Especially when 400,000 look-alikes are peppered across the countryside. 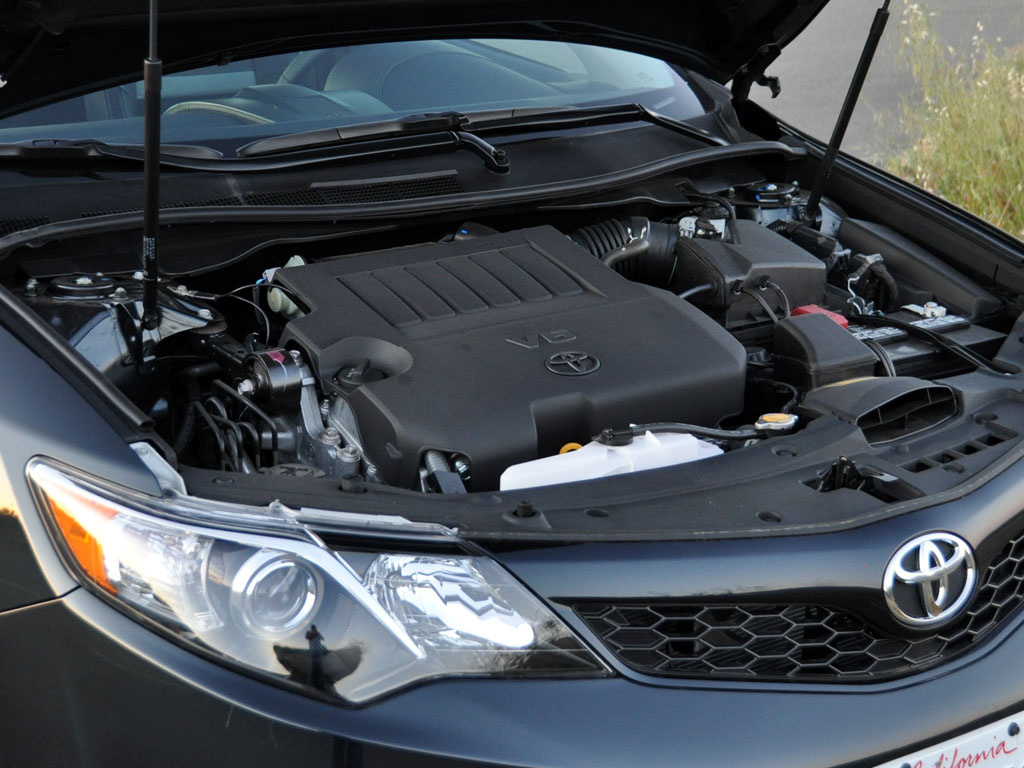 The 2013 Toyota Camry SE V6 is equipped with a 3.5-liter V6 engine rated to make 268 hp at 6,200 rpm and 248 lb-ft of torque at 4,700 rpm. A 6-speed automatic transmission feeds power to the Camry’s front wheels and offers both shift paddles mounted to the steering wheel and a manual shift gate to provide the driver with control over gear changes. According to the EPA, the 2013 Camry SE V6 is rated to get 21 mpg city/31 highway and 25 mpg in combined driving. Our test car averaged 22.4 in a mix of city, highway and mountain driving. Owners can expect this version of the Camry to accelerate to 60 mph in about 6 seconds.

This is a strong V6, often feeling more powerful than its horsepower and torque ratings might suggest. Deceptively quick, a Camry SE V6 is also entertaining to drive thanks to its sport-tuned suspension and 18-inch wheels. Compared to other Camry models, the SE feels taut and athletic, and while the all-season rubber makes it clear that most of the car’s weight sits over the front tires, this sport-tuned variant bends into a corner with enthusiasm. The only trade-off? A stiff, sometimes choppy, ride over less than perfect pavement. 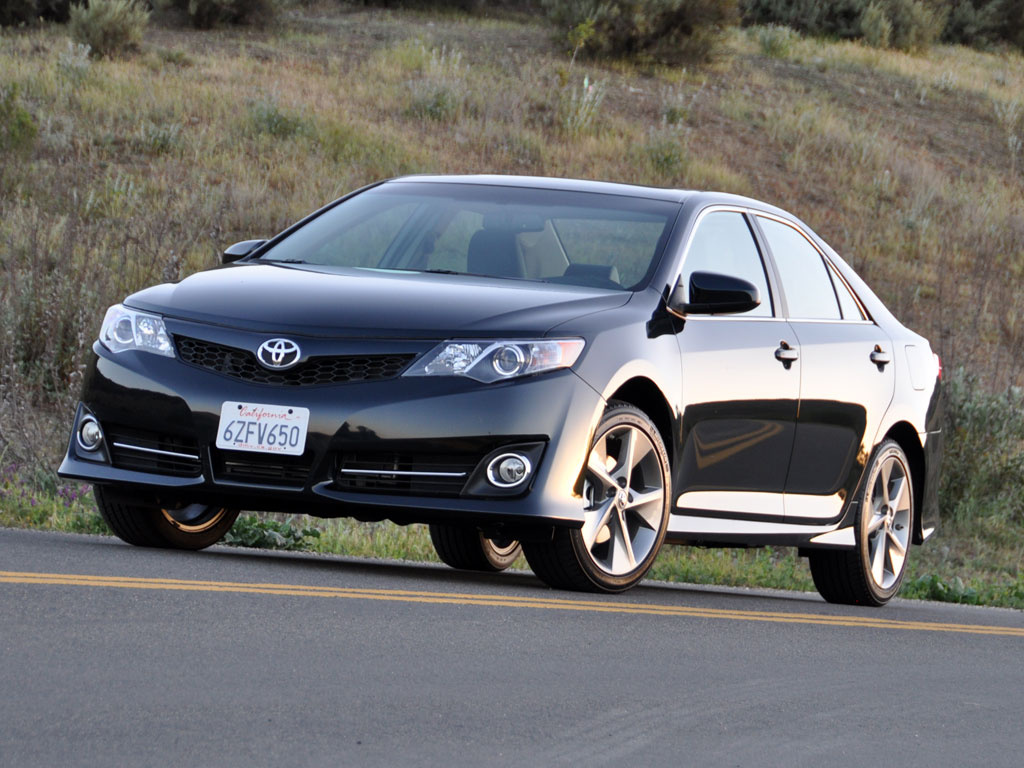 Like plastic? Good, because there’s plenty of it inside a Toyota Camry. Our test car was a well-equipped SE variant, and while the soft-touch upper dashboard and door panels, the plush center console lid, the optional leather seats with Ultrasuede inserts and the white exposed stitching help mask the scent of mass-market cabin componentry, there’s no denying that other midsize sedans offer more upscale and sophisticated surroundings.

The Camry SE’s front seats are comfortable, and the driver’s seat offers a wide range of adjustment to ensure a proper driving position behind the leather-wrapped tilt/telescopic steering wheel. The rear seat is roomy enough for 3 average-size adults or 2 larger people. Legroom and foot room are plentiful, and passengers sit high for a good view out. With 15.4 cubic feet of cargo space, the Camry’s trunk is average in size.

It’s easy to find what you’re looking for inside a Toyota Camry. Large primary menu buttons surround the standard Display Audio system’s 6.1-inch touchscreen, but the screen itself offers small buttons that are often hard to see due to excessive glare. Storage areas are plentiful, and the Camry provides a felt-flocked coin box to the left of the steering wheel. 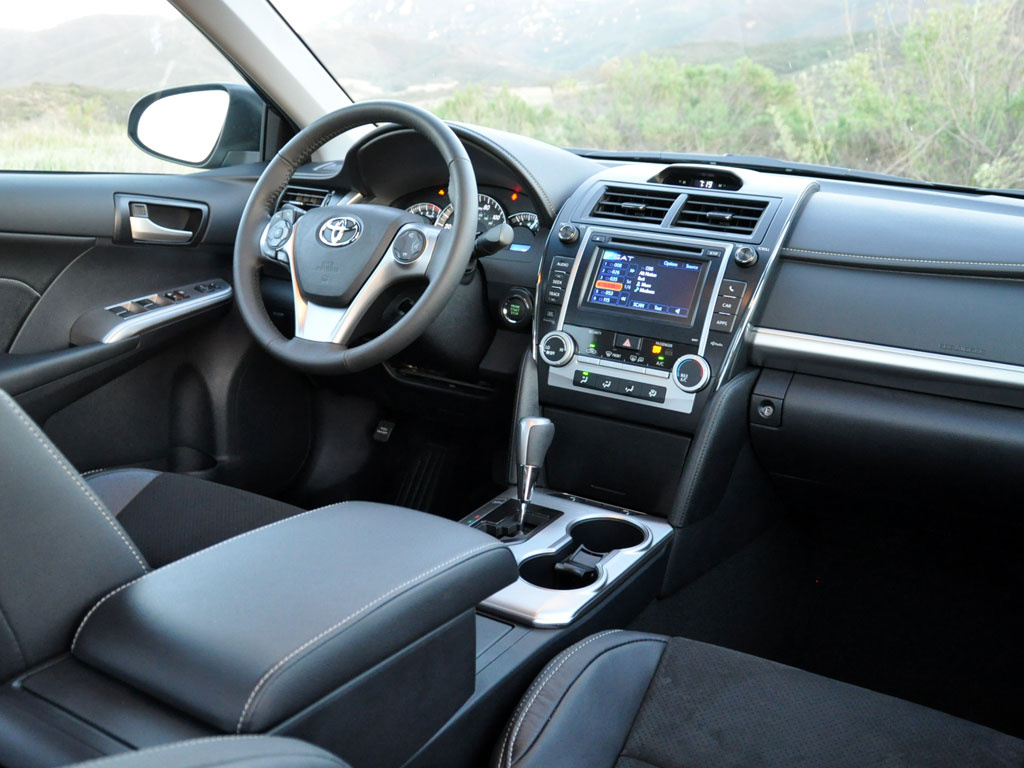 A free 3-year subscription to Toyota’s Entune connectivity and data services technology is also standard with the Camry SE V6. Entune includes access to the Bing search engine, Pandora and I Heart Radio Internet radio applications, the ability to order movie tickets or make restaurant reservations, and data services regarding traffic, weather, local fuel prices and more. Entune is powered by a paired smartphone, and Toyota explains that it is constantly testing new phones, platforms, systems and carriers to determine compatibility. A full list of tested equipment is available on Toyota’s Entune website.

A hard-drive navigation system is an optional upgrade for this system, as well as a 10-speaker JBL Greenedge premium audio system with a subwoofer and an amplifier. 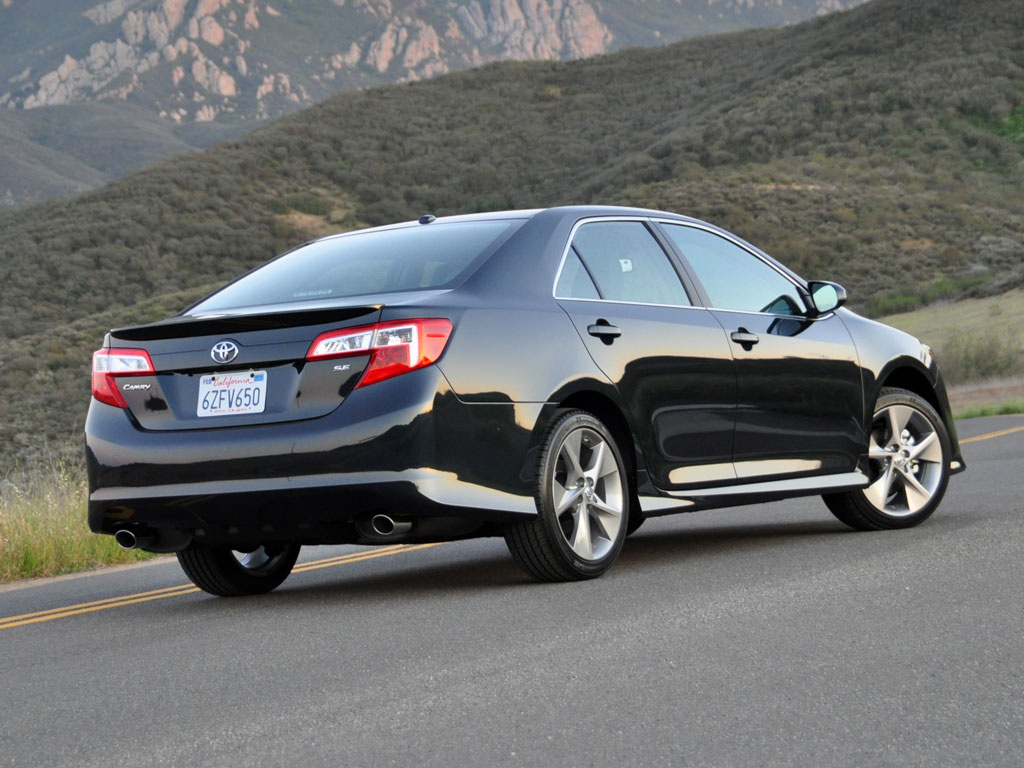 When it comes to safety, there are two problems with the 2013 Camry SE V6. First, Toyota offers its Safety Connect system only in the XLE and Hybrid XLE trims. Safety Connect is a subscription-based service that includes Emergency Assistance and, perhaps more important, Automatic Collision Notification. If the car’s airbags deploy, Automatic Collision Notification activates, putting a live operator in touch with the Camry’s occupants, checking to see if everyone is okay and personally dispatching rescue personnel to the car’s exact location to speed assistance. It sure would be nice if Safety Connect were offered for all Camry trims.

Otherwise, the Camry is a safe vehicle. It is equipped with 10 standard airbags, and it has Whiplash Injury Lessening front seat designs, antilock brakes, brake assist, traction control and stability control. It even comes standard with Smart Stop Technology, which makes it impossible for the car to accelerate if the brake pedal is pressed. A reversing camera, a blind-spot monitoring system and a rear cross-traffic alert system are optional for the Camry SE.

The National Highway Traffic Safety Administration (NHTSA) gives the 2013 Camry an overall crash-test rating of 5 stars. The IIHS calls the Camry a Top Safety Pick despite its poor performance in the small overlap frontal-impact test. However, starting in 2014, the Camry will no longer be eligible for the top IIHS rating unless it passes the new test with an Acceptable or Good score. 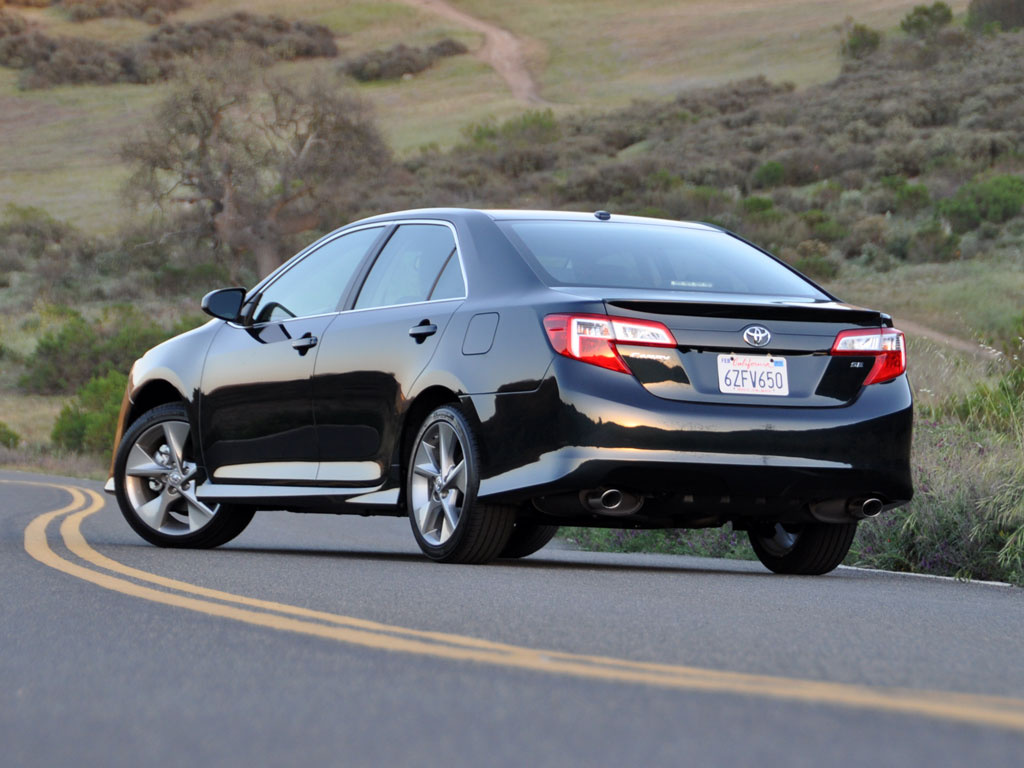 Toyota dealers are always making deals on the Camry. Rebates and low lease payments are usually offered, and in combination with a longstanding track record of delivering reliable service combined with free scheduled maintenance for the first 2 years or 25,000 miles of ownership, the Camry appears to make a strong value case for itself. However, with 400,000 Camrys sold every year, owners find themselves competing with cheap deals on new models and lots of other used Camry sellers when it comes time to sell, which pushes resale values down.

Additionally, aside from the Camry Hybrid models, this isn’t a particularly fuel-efficient vehicle, as measured in comparison to the EPA fuel economy ratings of some other midsize sedans. We fell short of the combined fuel economy rating for the Camry SE V6 by 2.6 mpg, though to be fair to the car, we also exercised the V6 engine on a regular basis, because it’s just such a great motor to rev hard.

The midsize sedan segment is the most competitive of all, and there are many models from which to choose. Though redesigned for the 2012 model year, the Camry is already one of the older designs; since its debut, new family sedans from Chevrolet, Ford, Honda, Nissan and Mazda have arrived, joining still-competitive models from Hyundai, Kia, Subaru and Volkswagen. Though the Camry is the best-selling nameplate among them, it is rapidly losing its appeal in the face of stiff competition.

thorton43 I want to Know if my 2013 camry SE has dual exhaust.. I swear mine did Then I noticed it getting Louder and now I only see one exhaust pipe And Muffler on the Right rear passengers Side >>> am I mistaken that it had 2 at one point ?

Users ranked 2013 Toyota Camry against other cars which they drove/owned. Each ranking was based on 9 categories. Here is the summary of top rankings.

Have you driven a 2013 Toyota Camry?
Rank This Car

My father's car (2013 Camry) recently has been acting up. While he was driving he had the ABS, emergency brake, and traction lights pop up on his dash. He pulled over, restarted the car after about ...

Radiator Fan Stays On After Car Is Off

Toyoto Camry 2013 Radiator fan stays on after car is off. The fan runs continuously (longer than 1 hr) after removing the key on a cold engine. The fan turns off only when the ignition is turn ON.

Where Is Fuel Pump Relay 2013 Camry

where is fuel pump relay 2013 camry in side?

After purchasing my Camry about 2 weeks later I had an after market backup camera installed. Since the instillation my media screen has been acting up. It worked fine before having the camera put i...

Why Won't My Car Start And Has Power

Battery is fine but no response from starter