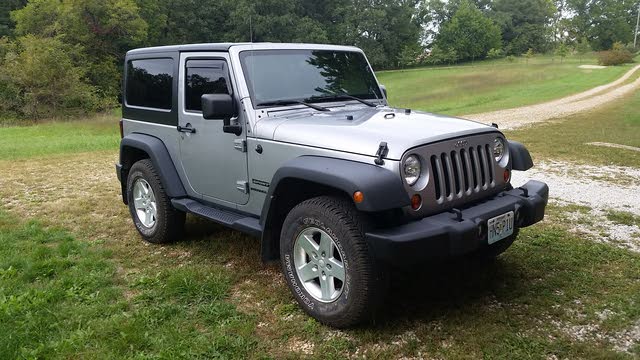 Average user score
4.4 ⁄ 5 stars
Based on 18 reviews
Great Toy by WWH — Modified by Rocky Ridge Trucks with 35" mud tires, 3.5" lift, wench, off road lights, steel bumpers, etc.... Added replacement head lights by Daniel Stern Lighting, as OEM lights are very poor. Great... Read more
Amazing by Brett — I love everything about this car. I'm still in the process of building it, but it'll be about another 10 grand before I'm close to the finished look. In the mean time it'll be garaged while I save mon... Read more
Fun Buggy! by nicoles2013 — I enjoy my Jeep in every possible way. I soon hope to give it a lift and get to a Jeep Jamboree to test its true abilities. I am happy to say that I am ashamed when it's clean -- this vehicle looks ... Read more

Anyone familiar with this nation’s history knows that Jeep’s rugged Wrangler has essentially been around since our grandfathers were storming the beaches in Europe and the Pacific in WWII. The 2013 version, of course, bears little resemblance to those nimble beasts of military burden, but remains basically unchanged from 2012 editions. Certainly not the most comfortable or the quietest SUV out there, this 4-passenger terrain-busting beast maintains its tradition as one of the most off-road-capable vehicles available, and again should be delivered in three trims, the base Sport, midlevel Sahara and the mountain-taming Rubicon. Look for all three trims to be delivered in the standard 2-door configuration, with all three again also offered in a 4-door Unlimited model, which is covered separately.

Although the present generation of this terrain-crawling beast resembles its forbears only in its distinctive front fascia, all trims continue to boast a stick-shift transmission and part-time 4-wheel drive (4WD), as well as a removable roof, removable doors and a removable windshield. Expect the 2013 Wrangler to be delivered with redesigned wheels for the Sahara and Rubicon, as well as a trailer sway-dampening system that’s standard throughout the lineup. Also, those who’ve wrestled with the removable top over the years will be happy to hear that a new spring lift-assist mechanism should make this often frustrating chore a bit more bearable.

Yes, Jeep has come a long way since its debut helped keep the world safe for democracy. Face it, though: If a refined ride, civilized appearance and comfy amenities are absolute necessities, Nissan’s nifty Xterra or Toyota’s terrific FJ Cruiser, though lacking the Wrangler’s heroic past, might be far more suitable.

In any case, for 2013 the base Sport should continue to boast skid plates, 16-inch steel wheels mounting all-terrain tires and that cool removable soft top outside, and cloth upholstery, split-folding rear seats, cruise control and tilt-wheel steering inside. Standard entertainment features are expected to remain a hefty 66-watt audio system with an MP3-capable single-CD player and 6 speakers.

Though carrying most of the standard comfort and convenience amenities found in the Sport trim, the 2013 Wrangler Rubicon can again be expected to flaunt such terrain-busting features as 17-inch alloy wheels, a heavy-duty transfer case and axles, electronic locking front and rear differentials, rock rails, a sway bar that can be disconnected for serious off-road use and standard air conditioning.

The 2013 Wrangler lineup is expected to stick with the 285-horsepower variable-valve-timed (VVT) 3.6-liter V6 that debuted in the 2012 edition. The standard transmission is a 6-speed manual that will pound out 260 lb-ft of torque, but a 5-speed automatic should once more be available on both the Sahara and Rubicon in each of their variations. Finally, look for towing to again max out at 2,000 pounds with the proper equipment, while mileage is expected to remain 17 mpg city/21 highway in stick-shift trims, and 16/20 in automatic-equipped trims.

The part-time 4WD system standard on all 2013 Wranglers ought, once again, to boast manual hi-lo gear selection, auto locking hubs and a rear locking differential. The Sahara and Rubicon trims, additionally, should retain the standard descent control that’ll continue as an option in the Sport trims.

Safety-wise, look for the 2013 Wrangle lineup to carry 4-wheel antilock brakes (ABS), traction and stability control, and front fog/driving lights. Front side-mounted airbags ought to remain optional across the line, while a remote antitheft alarm will likely remain optional on the Rubicon and Sport editions.

Roargie Consistent problems with the heating systems and a very known issue that jeep has refused to address as well as inferior welds and too thin and poorly welded brackets breaking off of axles. I have owned 3 JK's and 2 had hearing issues and 2 had bracket issues on the axles. One of them was the front axles almost causing me to wreck losing control. My family and I are done with Jeeps.

Users ranked 2013 Jeep Wrangler against other cars which they drove/owned. Each ranking was based on 9 categories. Here is the summary of top rankings.

Have you driven a 2013 Jeep Wrangler?
Rank This Car

Every time I start my Jeep the abs and traction light go on and it feels like the Jeep is braking on its own. When I scanned the Jeep it didn’t show any problems. If it’s the sensor how do I find...

My Jeep will sell this afternoon besides a cashier check , Bill of Sale and Title what else has to done Thanks Michael De Boe

I filled out 3 dates & times to request a test drive. Can I send the message that ANYTIME during those days will be acceptable?

Jeep Sputters Going Down The Road And Then If At A Red Light It Will Cut Of...

Does anyone know why this would happen?