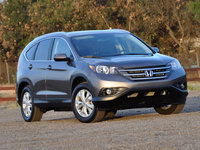 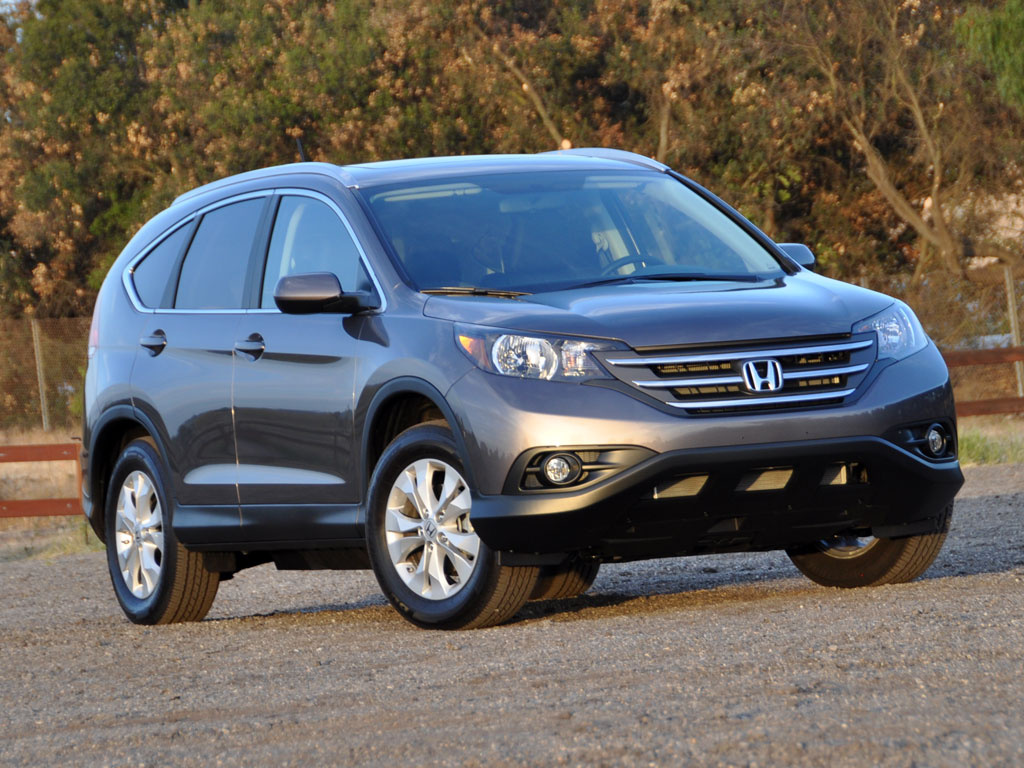 If you like the way the 2013 Honda CR-V looks and you don’t mind driving a vehicle that’s merely adequate in terms of power, then you’re a good candidate for this compact crossover SUV. As a daily driver, the 2013 CR-V does almost everything exactly right and provides enough variety in terms of equipment to satisfy most mainstream buyers. Add an excellent track record for reliability and outstanding crash-test ratings, and it’s hard to go wrong with this Honda. 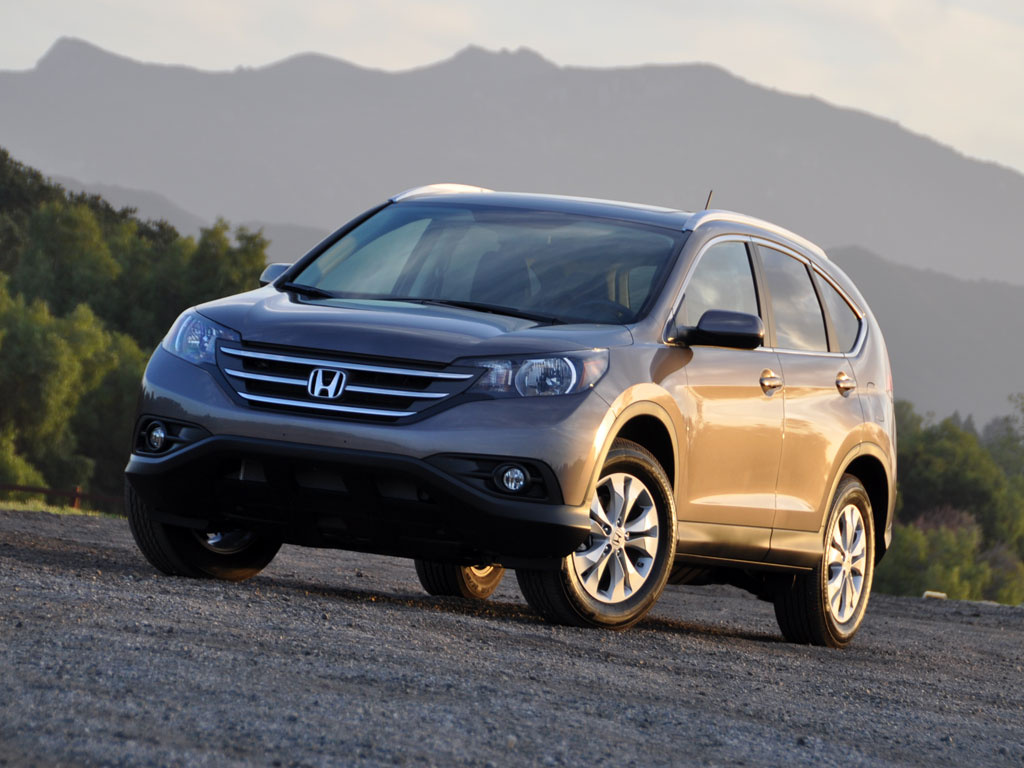 I asked: “Did you think the CR-V was good looking?” My wife’s reply: “It was OK. It’s not bland.” Indeed, the CR-V is not bland. Perhaps it should be. One of the first crossover SUVs to be sold in America, the Honda CR-V has, in my opinion, been a visually unappealing vehicle since the first one rolled off a Japanese transport ship back in the mid-1990s. Last redesigned for the 2012 model year, the current Honda CR-V has a face only its mother could love.

One of the roomier compact crossover SUVs on sale today, the CR-V is equipped with an impressive interior. Materials exude quality in terms of texture, tones and finishes, and nothing about the CR-V’s cabin looks or feels cheap. The CR-V’s cabin is a great place to spend time, and clearly the automaker understands exactly how important it is to get a car’s interior just right.

But wow, the outside is an acquired taste, for sure. 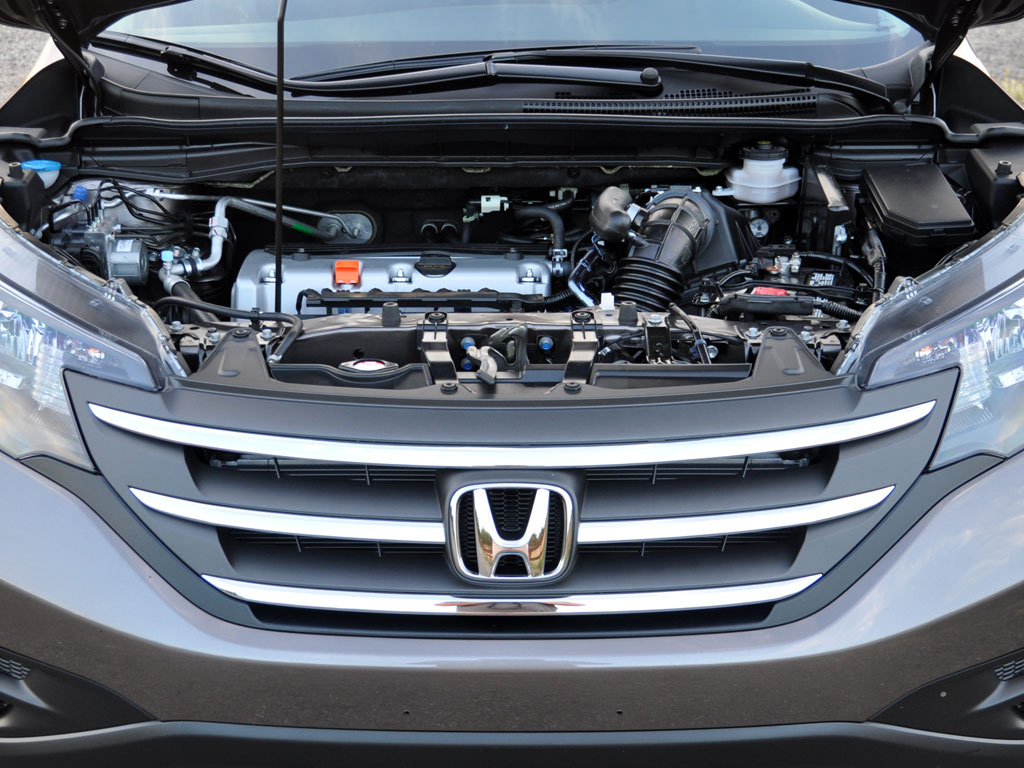 Wizards tuned the Honda CR-V’s suspension. As is the case with most Hondas, the CR-V’s underpinnings make the crossover genuinely entertaining to drive by rigorously controlling excess body motions while at the same time isolating occupants from unwanted impact harshness without filtering communication about the road surface. Does that sound like an impossible feat, like magic must be involved? Yes, it does. Hence the wizards.

Honda’s magicians have massaged the rest of the CR-V’s driving dynamics, too. Feeling far more athletic than a tall, front-wheel-drive SUV rolling on all-season tires has a right to, the CR-V’s electric steering proves resolute on center yet light and accurate off center, and the leather-wrapped steering wheel feels good in the driver’s hands. The brake pedal is brilliantly calibrated, sensitive for fine-tuning of pressure and strong when rapid deceleration is required.

If there’s a dynamic letdown associated with the 2013 Honda CR-V, it’s related to its refined 2.4-liter 4-cylinder engine, which is not particularly powerful. Charged with motivating up to 3,545 pounds of SUV before any passengers or cargo are loaded, the engine makes 185 hp at a lofty 7,000 rpm and 163 lb-ft of torque at 4,400 rpm. This is a hard-working motor, though occupants don’t realize it, because it revs smoothly.

The CR-V’s 5-speed automatic transmission is geared to make best use of available power, delivering motive force to the front wheels. An all-wheel-drive system is optional. Every CR-V is equipped with a driver-selectable Econ Mode designed to help extract maximum fuel economy. There is little discernible difference in power delivery with Econ Mode engaged, and it is easy to override when necessary.

According to the EPA, our CR-V EX-L AWD test vehicle should have returned 22 mpg city/30 highway. We averaged 23.8 mpg in combined driving, with the Econ Mode engaged half the time. That’s less than the EPA’s expected 25 mpg combined driving rating. 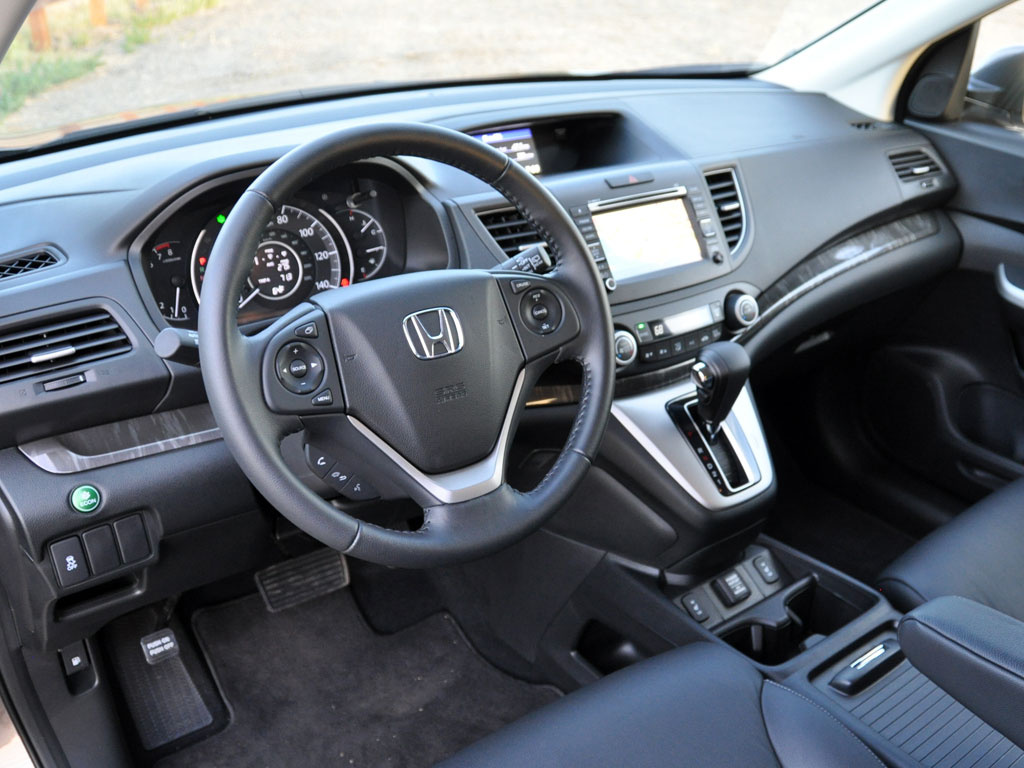 Get into a CR-V on a sunny day and check out the black plastic surrounding the radio and center vents. It sparkles with a subdued metallic finish, looking very upscale and artistic. The CR-V’s cloth headliner feels plush and expensive, and its edges are expensively tucked into the roof where it meets the sunroof rather than hidden under a cheap rubber gasket. The hard plastic surfaces have rich texturing and a low-glare matte finish, while the CR-V EX-L’s leather seats feel soft and comfortable. Honda really sweats the details when it comes to this cabin.

As nice as the CR-V’s interior is, this vehicle is really all about function. Owners access its 37.2-cubic-foot cargo area through a rear liftgate employing aggressive assist struts, making it effortless to open. A low liftover height makes it easier to load heavy items, and Honda provides 2 grocery bag hooks for holding plastic sacks in place, one on each trunk wall.

Folding the CR-V’s rear seats is a single-handed affair, performed from behind the vehicle using the levers on either side of the cargo area. Pull a lever, and the rear headrests collapse, the rear seat’s bottom cushion flips itself forward, and the seatbacks drop to form a flat load floor and 70.9 cubic feet of cargo room. This design is just one of many examples offering evidence of Honda’s attention to detail in developing the CR-V.

In addition to its sizable cargo areas, the CR-V provides plenty of space for storing this and that, starting with a large center-console bin between the front seats. Inside, the rubber-lined bin contains a USB port, an auxiliary audio input jack and a power port. A tamboured door with a rubber surface slides to cover the bin, providing a shallow table between the seats that is perfect for holding smartphones. The grooves, however, tend to trap grit. Additionally, the CR-V is equipped with little nooks and crannies for stashing stuff almost everywhere you look.

The CR-V is adept at schlepping people, too. The front seats are quite comfortable, offering inboard armrests and an excellent driving position behind a leather-wrapped tilt/telescopic steering wheel. The front passenger’s seat sits a little bit low, but its bottom cushion is angled to provide good thigh support. Honda chooses to cover the upper door panels in hard plastic rather than a soft material, representing the only comfort faux pas in the front compartment.

Rear seat riders won’t be as happy as the folks in the front seats, despite the SUV’s flat floor and generous amounts of leg and foot space. The bottom cushion is firm and fails to support the thighs of longer-limbed passengers, and the rear seatback has too much lumbar support dialed into the backrest. But my kids didn’t complain about these things. 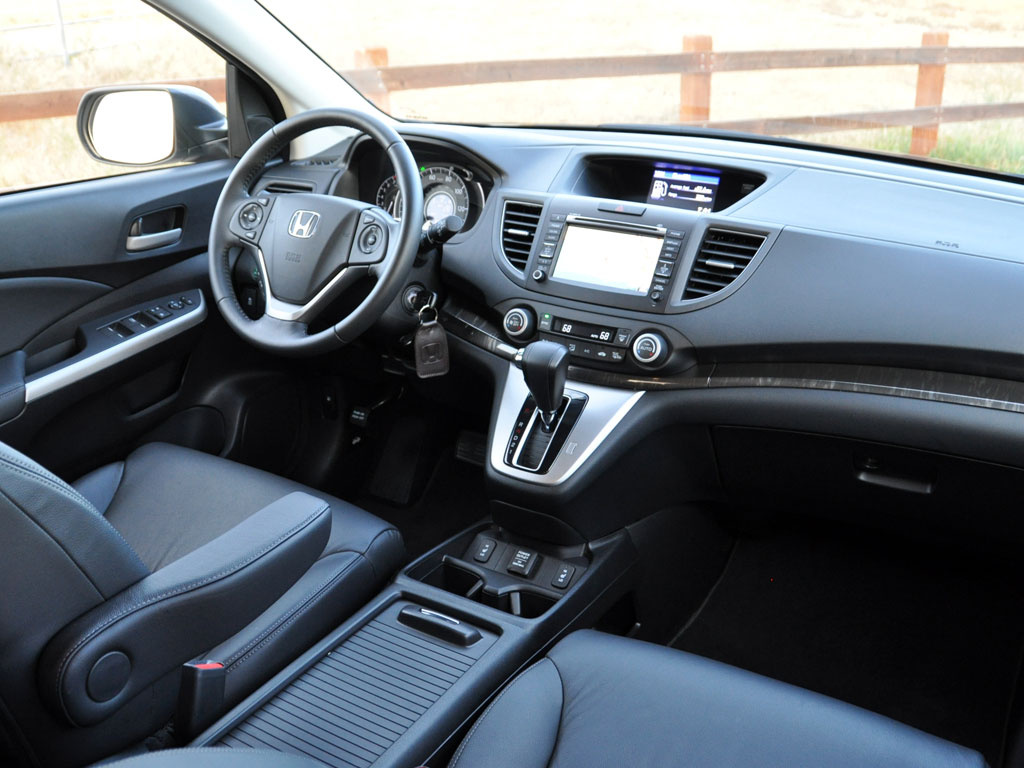 Every 2013 Honda CR-V is equipped with Bluetooth connectivity with music streaming, SMS text-messaging capability, a Pandora Internet radio interface, a USB port, an auxiliary audio input jack and MP3/WMA playback capability. A multi-angle reversing camera and an Intelligent Multi-Information Display are also included on all CR-V trim levels, while the EX-L version is equipped with a more powerful audio system with extra speakers and satellite radio with a 90-day complimentary subscription.

Customers selecting the CR-V EX-L have a choice between an optional rear-seat entertainment system and an optional touchscreen navigation system. These two features cannot be combined into the same vehicle. Instead, Honda requires customers to select one or the other. Our EX-L test vehicle was equipped with the touchscreen navigation system, which includes voice-recognition technology.

The CR-V’s Bluetooth connection is easy to set up, and the voice-recognition system walks the driver through the necessary steps and voice prompts, which takes a long time but is necessary until the driver learns the system’s 750-command vocabulary.

While testing the navigation system, I tried searching for a new burger joint in my hometown, called Stacked. Instead, the system gave me similar places located all the way across the country. I switched to a well-known local chain called In ‘N Out. However, unless I included the word “Burger,” this request did not result in lists of local outlets for yummy deliciousness. 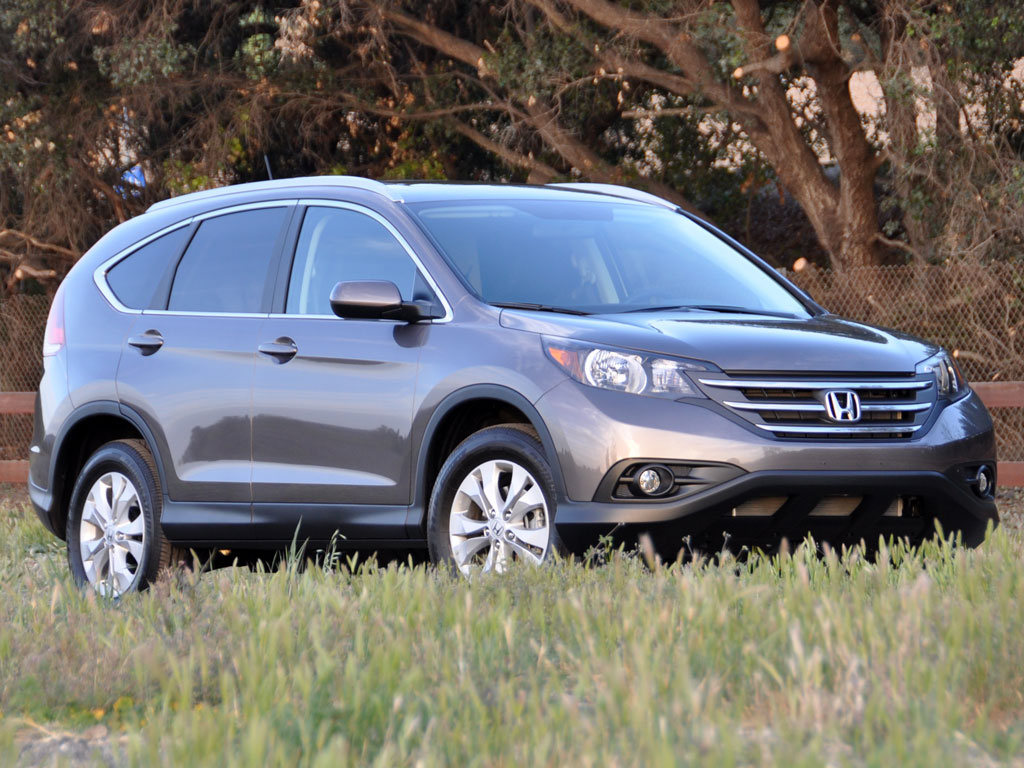 As is true of all Honda models, the 2013 CR-V is engineered to the automaker’s Advanced Compatibility Engineering (ACE) standards, which means its underlying structure is designed to deflect impact energy away from the occupant compartment in the event of a crash. In addition to its ACE body structure, the 2013 CR-V is equipped with a left side mirror that reveals the blind spot on the driver’s side of the vehicle, and a multi-angle reversing camera is standard.

Based on the CR-V’s 5-star overall crash-test rating from the National Highway Traffic Safety Administration (NHTSA) and its Top Safety Pick rating from the Insurance Institute for Highway Safety (IIHS), ACE works. The Honda CR-V is a safe vehicle. 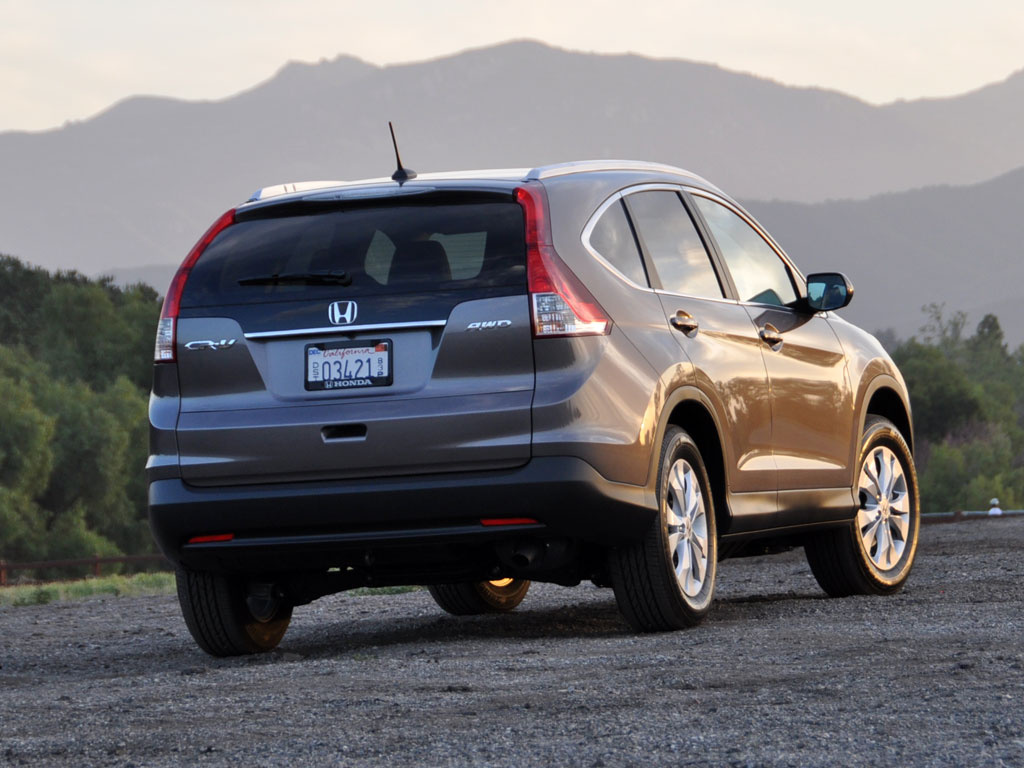 The Honda CR-V LX starts at $23,625 and, except for dark tinted rear privacy glass and aluminum wheels, includes everything anyone really needs in a compact crossover SUV. Get all-wheel-drive, and the CR-V’s price increases by $1,250 while fuel economy decreases. Make sure you really need 4 driven wheels before paying extra for AWD.

Speaking of fuel economy, we missed the CR-V AWD’s 25 mpg combined driving fuel economy rating by 1.2 mpg. This might be because the vehicle was tested in a mountainous region. It might also be because the Econ Mode button was engaged for only part of the time we drove the vehicle. We also spent plenty of time driving with a family of four aboard.

While a CR-V is expected to be extremely dependable, the standard warranty coverage is skimpy, covering the entire vehicle for 3 years or 36,000 miles, and the powertrain for 5 years or 60,000 miles. There is no roadside assistance plan, and there is no free scheduled maintenance. Get a flat tire, and you are on your own.

Still, the CR-V is priced competitively and is expected to retain a big chunk of its original value when the time comes to sell. Add these traits to its undeniable comfort, utility, safety ratings and record for reliability, and this SUV is a compelling choice no matter what it looks like.

alligator1 Too bad when you purchase a Honda CRV with it's ten computers they spend at least sixty minutes or more upselling an extended warranty and only 5 minutes on telling you how it works! Worst dealer experience that I have ever had in my life!

Jim I got scammed when I bought my 2013 CRV. Even with a 7,500 cash down payment I ended up borrowing more than the inflated sticker price! The did the seat treatment for over $300 and the seats soak up rain water like a sponge.

Users ranked 2013 Honda CR-V against other cars which they drove/owned. Each ranking was based on 9 categories. Here is the summary of top rankings.

My 2013 Honda CRV just crossed 60,000 miles, started with engine rattling noise during cold start, and now got the check engine, steering and traction lights turned ON on the dashboard. I took it th...

My CRV was shuddering at about 25 mph. I took it to the dealer and they said it needed a software update. I replaced the transmission fluid about 20,000 miles ago. They said they had to replace t...

How Do I Turn Off Constant Mpg Readout