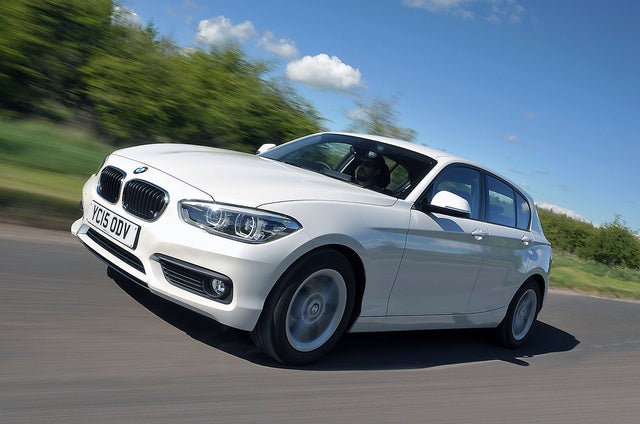 Average user score
5 ⁄ 5 stars
Based on 5 reviews
I Love The 135i - Zoom Zoom by edsantoleri — I've been driving BMWs since the early 1980s. This car is the most fum of all the ones I have owned. The twin Turbo is smooth and the boost is impressive. Great breaks, excellent handling, fun ride! ... Read more

BMW's least-expensive series gets a new sporty performer for 2013, dubbed the 135is, without another change for the rest of this compact coupe and convertible lineup of now 3 trims. Following a 2012 facelift this favored compact can't help but turn heads in convertible form, and though the coupe versions may not be as easy on the eyes, they perform just as well with the boon of a serenely quiet luxury cabin. Although you will find more engine in Infiniti's G and more style in Nissan's 370Z, the 1 Series driving experience is distinctly BMW and second only to that of the twice-as-pricey Porsche Cayman.

The new 135is is offered in both coupe and convertible forms, just like its 128i and 135i brethren, but otherwise it follows the 135i in terms of features and options with few exceptions. Though a heated steering wheel is not an option for the 135is, we get the idea it shouldn't see a cold day, given its vast mechanical differences from the standard 135i. BMW tweaked up the turbocharged 3-liter inline 6-cylinder for an additional 20 horses and 17 lb-ft of torque in the 135is over the usual 300 points for each in the 135i thanks to a performance exhaust and more robust cooling system. To look the part, BMW gives the 135is unique 18-inch wheels, high-gloss black accents, sport badging, stainless-steel pedals and sport seats with optional black-and-blue leather upholstery.

Though you yourself should be no bigger than average size to comfortably adore this favored compact, the 1 Series may still be a bit too cozy for the liking of some. With decidedly tight rear seating for 2 and just 10 cubic feet of cargo space in the trunk (1.6 in a convertible edition with the top down), the 1 Series aptly fits its class in terms of size. Unfortunately that doesn't exactly translate into better economy with its necessary premium fuel, fetching 18 mpg city/28 highway in the base 230-hp and 200-lb-ft of torque tuning of the 3-liter engine in the 128i, and 20/28 with the turbo edition for the 135i and 135is. Nevertheless, drivers say shaving 10 inches off the popular 3 Series coupe in the 1 has a noticeable positive impact on agility and city practicality.

Speaking of city practicality, the 1 Series in convertible form offers a soft top that can open or close while moving up to 25 mph in 22 seconds. That is, of course, if nobody left a purse or small kitten in the trunk, which offers only a pass-through in the convertible, rather than the 60/40 split-folding rear seat in the coupe. The 128i can look and handle more like the 135i with an M Sport package, but its zip-to-60 mph won't change much from 6.1 seconds with the 6-speed stick or 6.7 seconds with the 6-speed automatic. Both 135 models get the option of a 6-speed stick or a 6-speed auto-manual, and those nudge at the 5-second standard.

The 1 Series is definitely a car for one to enjoy, two for company and more for the crowd that doesn't mind being crowded. It's not exactly equipped for high-tech touring entertainment, rather built for those driven by the thrill of the road and a liking for things in small packages.

Arash Could any car review be worse than this? I've not seen one. Wasted my time

I have the m sport shadow edition 2018, the spec says it has door sill finishers with illuminated m designation. I cant seem to get them to light up, any ideas?

How do I close ad?

164 views with 1 answer (last answer about a year ago)

How Do I Open The Trunk Of A 128i When The Battery Is Dead?

My 128i was on blocks for six months with the battery disconnected. Now that I want to reconnect the battery, how do I open the trunk?

I can't open my glove box. right side unlocks but left side seems to have broken and is stuck. any suggestions to opening it without causing major damage?

How Do I Add The Warranties? How Do I List It As A CPO?

How do i add the warranties? My CPO warranty will transfer plus i have wheel & tire warranty and windshield, paint and leather warranty