The performance-oriented Subaru Impreza WRX STi delivers a rocket-like ride, thanks to its turbocharged powerplant, and receives a few new features for 2012, including an optional touchscreen navigation system and an updated wheel design for the WRX STi Base sedan.

Although the bulk of the Impreza lineup received a full fourth-generation makeover for 2012, the WRX STi remains essentially unchanged, resulting in a slightly outdated look, and fuel-economy numbers continue to suffer for this high-performance vehicle.

The 2012 Subaru Impreza WRX STi delivers on just about every front, including performance, handling, safety features, interior amenities and overall value. While it might not be the right fit for every driver on the road today, especially those who require higher mileage numbers from their vehicles, the WRX STi should appeal to discerning buyers who seek a competent daily commuter capable of slicing through traffic on weekdays and eating up the highway miles on weekends.

After receiving a design refresh in 2011, which added new wide-body exterior components, the Subaru Impreza WRX STi (for Subaru Tecnica International, the automaker's motorsports division) gets only a few minor updates for 2012. The exterior design makeover introduced in 2011 gave the WRX STi a more aggressive appearance, thanks to its projecting fenders and rear quarter panels, which helped highlight the vehicle's low, wide stance. In addition, the new fenders and body panels enabled Subaru to add wider 18-inch wheels and tires, which helped to reduce body roll and improve overall stability. Other exterior elements introduced with the 2011 update included a new STi-design front bumper, a jutting front lip spoiler and aerodynamic side moldings. A black grille up front enhances the vehicle's sporty look, while an integrated hood scoop makes a statement about the vehicle's impressive performance capabilities. The sedans' high wing on the rear decklid makes a statement of its own, while the hatchback receives an STi rear spoiler.

For power, the WRX STi retains its turbocharged 2.5-liter 4-cylinder engine, which pumps out 305 hp and drives the vehicle from 0-60 in around 5 seconds. In addition, the WRX STi rides on a sport-tuned suspension with Brembo brakes and 2 driver-adjustable differentials. In terms of performance and handling, that puts the WRX STi at the front of the Impreza herd of vehicles, which includes the Impreza 2.0i trims, numbering more than a dozen in all. For 2012, the 2.0i trims received a new platform, a restyled exterior, a roomier cabin and a new, more fuel-efficient 4-cylinder engine. The WRX STi retains the previous year's platform and styling, based on the Impreza's third generation. Without its 2011 exterior updates, the WRX STi might look outdated, but the wide-body styling should serve as a temporary patch for another year or two, until the sporty STi gets the updates the rest of the Impreza line has already received.

Subaru again offers the WRX STi in Base sedan, Base Hatchback and Limited sedan trims for 2012. The Base sedan gets new 18-inch alloy wheels, while all 3 trims can now be outfitted with an optional navigation system with a 6.1-inch LCD touchscreen. Leather upholstery, heated front seats, aluminum-alloy pedals and STi sport steering are some of the standard features on all three trims. Symmetrical all-wheel drive also comes standard, as it does on all Subaru vehicles.

The WRX STi's most direct competitors include the Volkswagen Golf R hatchback and the Mitsubishi Lancer Evolution sedan. Both feature turbocharged 4-cylinder powerplants and have price tags similar to the STi's. The Golf R pumps out 256 hp, while the Evo delivers 291 hp. Other competitors include the Mazda MAZDASPEED3, also with a turbocharged 4-cylinder but available at a much lower price tag, as well as the BMW 1 Series coupe and the MINI Cooper S. When it comes to the price-vs.-power ratio, however, the Impreza WRX STi occupies a rarefied space in the automotive market. 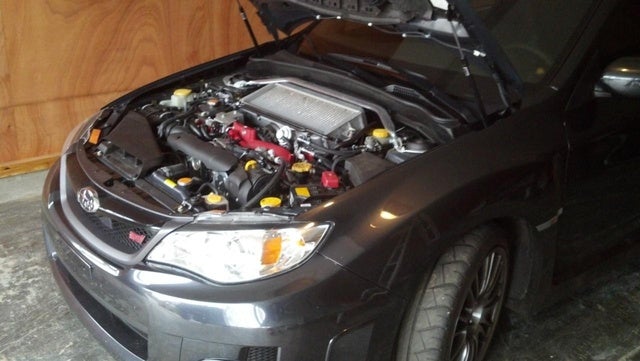 Suburu uses such features as extreme turbocharging and a Dual active Valve Control System (DaVCS) to boost horsepower from the WRX STi's 2.5-liter 4-cylinder engine to 305 hp at 6,000 rpm. That compares to 265 hp from the same 2.5-liter 4-cylinder engine powering the base WRX, and 170 hp produced by the Impreza's new 2.0-liter 4-cylinder engine. Like the new 2.0-liter Impreza powerplant, the WRX STi's engine features a Boxer-style configuration, in which pistons move side-to-side horizontally, rather than vertically or in upright V-shaped angles. According to the automaker, this arrangement provides better overall balance and less vibration and results in more efficient operation, as well as a lower center of gravity.

The STi's turbocharged engine, which produces 290 lb-ft of torque at 4,000 rpm, mates to a 6-speed close-ratio manual transmission with Incline Start assist. Naturally, fuel-economy numbers suffer, especially when compared to the new fourth-generation Impreza, which manages numbers of up to 36 mpg. The STi's numbers check in at 17 mpg city/23 highway. In addition, the turbocharged powerplant requires premium 93 octane fuel.

A number of testers have noted that, with its turbocharged powerplant and impressive 0-60 time, the WRX STi can keep up with most V8-powered sports cars and even give them a run for their money. However, they also note that the base WRX, which comes without a few of the STi's performance-oriented bells and whistles, delivers a sporty ride that's almost as fast at a much lower cost. One of the STi's best selling points, however, remains its versatility. It behaves well in daily-commuter, heavy-traffic situations, but opens up easily on the highway, with plenty of power still left in the pedal at mid-range and higher speeds. The manual transmission shifts easily, with quick, tight throws, enhancing the sporty driving experience.

The WRX STi's high-performance sport-tuned suspension does a good job of balancing grip, stability and comfort, thanks to the vehicle's lowered ride height, wide tires and upgraded springs, shocks, bushings and stabilizer bars. While the ride remains somewhat stiff, as expected from a performance vehicle, it rarely feels harsh or bruising, like the Mitsubishi Evolution's ride does on occasion. At the same time, testers say the Evolution delivers a more visceral driving experience. However, the STi serves well as a daily commuter, but steps up to higher levels of stability and grip when pushed. Some testers have noted a small amount of body lean in corners, and others say the STi exhibits some understeer in tight corners, resulting in a wider turn track than intended. But overall reviewers are impressed by the WRX STi's ride and handling.

New 18-inch, 5-spoke aluminum-alloy wheels with a high-luster finish and summer performance tires come standard on the Base sedan, while the Base Hatchback and Limited sedan get 9-spoke BBS aluminum-alloy wheels. The WRX STi's Symmetrical All-Wheel Drive (AWD) system includes a Driver Controlled Center Differential (DCCD) with 6 driver-adjustable differential settings for the vehicle's helical limited-slip front differential and Torsen torque-sensing limited-slip rear differential. Under typical operation, the AWD system splits power 41:59 front-to-back for agility and control. In addition, Subaru equips the WRX STi with a Subaru Intelligent Drive, or SI-Drive, system, which enables drivers to choose from 3 performance settings using a knob on the center console. Settings include an Intelligent mode for normal driving situations, a Sport mode for improved throttle response and a Sport Sharp (S#) mode for optimal performance and handling.

Although the WRX STi's cabin can't quite compete with those of more sedate, upscale vehicles, it provides plenty of niceties, especially for a performance-oriented vehicle, which typically receive a relatively stripped-down cabin. A few hard plastics and cheap-looking interior components common in the Impreza line remain, such as the knobs for the climate control system, but those are largely overshadowed by such sporty upgrades as high-backed black sport seats with leather side bolsters and Alcantara inserts and red stitching. Aluminum-alloy pedals and a 3-spoke leather-wrapped STi steering wheel with audio, cruise and Bluetooth controls also give the cabin a sporty feel. The unique STi sport-design electroluminescent gauges, which are generally easy to locate and read, include a center-mounted tachometer, as well as a DCCD/SI-Drive modes display.

The Base sedan and Base Hatchback also come equipped with such standard features as heated front seats, automatic climate control, power windows and door locks, a tilt/telescopic steering column and a 6-speaker audio system with a CD player, Bluetooth, a USB port and an auxiliary jack. Owners can add SiriusXM satellite radio as an option. The front seats feature manual adjustment, and the rear seat splits 60/40 and folds flat. The Limited sedan adds full leather upholstery and a power tilt/slide moonroof. The new optional navigation system with voice-activated controls, now available for all trims, includes a 6.1-inch LCD display and incorporates an upgraded 6-speaker audio system with HD radio, satellite radio and a roof-mounted antenna.

The WRX STi comes equipped with a few unique safety features, including a Vehicle Dynamics Control (VDC) system, which incorporates electronic stability control and a performance-oriented traction control system. The VDC features 3 driver-selectable modes, including an Off setting for drivers who want to push the vehicle to its limits. In addition, the STi gets 4-sensor Super Sport antilock brakes with brake assist and electronic brakeforce distribution. Six airbags also come standard.

The IIHS gave the WRX STi a top safety rating of Good, while the NHTSA awarded the vehicle 5 out of 5 stars for protecting passengers during rollover crashes. The NHTSA did not test the STi for other types of crashes.

Most owners agree that for a performance-oriented sport vehicle, the WRX STi is hard to beat in its price range. While owners admit the vehicle won't appeal to all drivers, those who seek a daily driver that doubles as a weekend sports racer won't be disappointed. In addition, owners like the overall balance of performance, styling and interior features, including the new optional navigation system, which gets a thumb's up. In addition, a number of owners comment on the vehicle's vibrant exterior colors, including Satin White Pearl and Plasma Blue Pearl. The STi handles admirably in traffic, owners say, and the ride turns thrilling on the highway. In addition, the seats are comfortable enough for longer trips. Very few owners have anything negative to say about the STi, attesting to its overall capability and value.

What's your take on the 2012 Subaru Impreza WRX STI?

girtsmm Hi everyone, my previous car - Evo 9 - with 3" exhaust, GEMS , carbon rear and front differencial ( sorry, my English is not perfect), but had drive in one team with Cubica and Kuchar, now I have 2013 Subaru Impreza 2.5 sti sedan, I do not like response of this engine, what can you recomend to change - (this is training car) - Gems and Motec offer Eco just for sport cars, exhoust does't satisfy fly, etc. I' ready to invest in this car, but there is no reason, will buy Evo 10. My e-mail - girts.mancinskis@primekss.com.

Have you driven a 2012 Subaru Impreza WRX STI?
Rank This Car

Tools To Work On A Subaru

Hello, I have a friend who is wanting to make his sti into a drift car. He is getting all the parts to do so, but I would like to get him a tool set to work on the car. I have been doing a little bi...