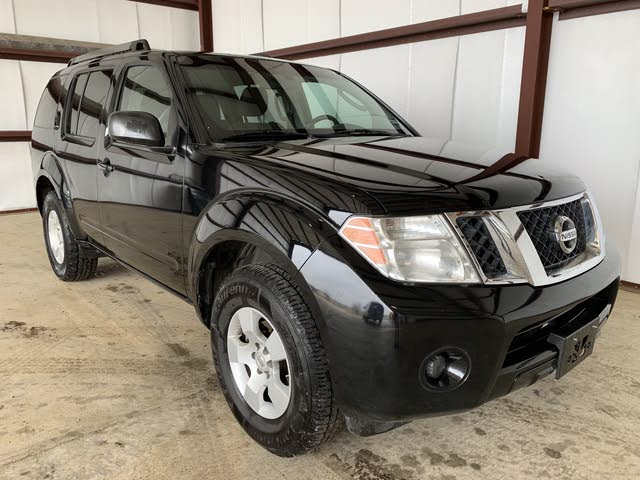 Some tight quarters in the second- and third-row seats, as well as tepid mileage numbers, distracting road and wind noise, chintzy interior pieces (in lower trims), truck-tough ride and handling stresses, and a tad less cargo space than some rivals remain among the 2012 Pathfinder's demerits.

For those who need the people-hauling practicality and the strong towing and payload capabilities of a truck-based SUV, Nissan’s 2012 Pathfinder should prove worthy. If, however, it's sportiness, ride comfort and cutting-edge design they’re looking for, they’d be better off elsewhere. This is slated to be the final year of the body-on-frame Pathfinder era, so beware that modernization will likely result in a spiffier, more efficient sport ute but an unfortunate deterioration in any kind of off-road utility.

Among the last of the oversized truck-based sport utes left standing, Nissan's 2012 Pathfinder offers the sizeable family a truckload of practicality, payload and people-hauling ability. With 7-passenger seating in 3 rows, available part-time 4-wheel drive (4WD) and either V6 or V8 power and performance, depending on trim selection, this hefty SUV remains a trailer-towing fool on-road and a competent bushwacker in moderate off-road conditions. But if you want to take advantage of these brutish attributes, act now, because things are going to change dramatically for 2013.

In any case, this third Pathfinder generation debuted in 2005 and, for better or worse, retains what might politely be described as a venerable look, though the word “dated” has lately been thrown around. No matter; this midsize ute once more remains available in 5 trims: the entry-level S, the lower midlevel SV, the higher midlevel Silver Edition, the upper-echelon LE and the flagship LE V8, which, needless to say, flaunts 8-cylinder muscle. Meanwhile, about all that’s notably new for 2012 is the hard-drive-based navigation suite that’s now standard aboard the top-shelf LE trims.

Once again, those Pathfinders equipped with V6 powerplants are delivered in the standard rear-wheel drive (RWD) configuration, while the LE V8 totes full-time 4WD to the office or the back woods. Some 79.2 cubic feet of cargo area with second- and third-row seatbacks folded will tote those moderately hefty loads, while 16.5 cubic feet of space remain when all seats are upright, quite enough to stash a week’s worth of groceries.

Again this venerated sport ute will be found lacking in third-row compatibility for average-size adults, while even the second row could be roomier, to hear more than a few reviewers tell it. Of course, the truck-based chassis is going to ride like, well, a truck, while handling remains ponderous, at best. But towing capabilities are far above and beyond those of the typical crossover, so the choice remains: a wimpy load-bearing ability with a smooth ride and alert moves, or a workhorse of a trailer-towing people-hauler that does some bouncing and leaning.

Should a smooth ride and nimble handling indeed be desired, Chevy’s Traverse, Dodge’s Durango or Ford’s Explorer, each with a more civilized car-based suspension, will give you all that. Jeep’s Grand Cherokee and Toyota’s 4Runner, on the other hand, offer less passenger space, but more fuel-efficient V6 engines, not to mention an almost sedan-like ride and agility. Furthermore, each of these rivals offers more cargo space and, in the case of the 4Runner, available 3-row seating for 7. 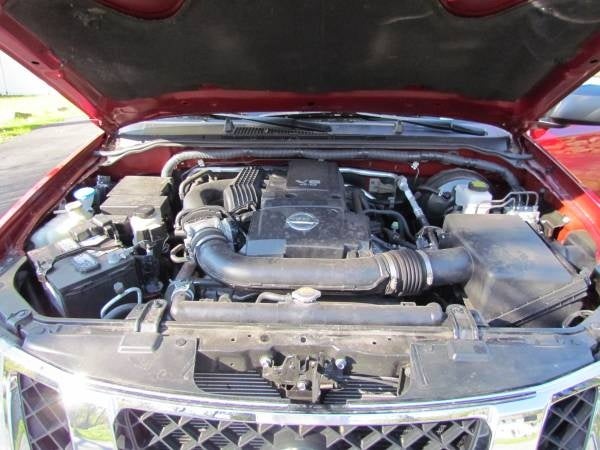 The standard powertrain in all Pathfinder trims except the LE V8 is a 4.0-liter variable-valve-timed (VVT) V6 engine mated with a 5-speed automatic transmission. The 5-speed automatic again sports a manual-shift feature in all trims except the S while allowing the six-banger to put out 266 hp at 5,600 rpm and 288 lb-ft of torque at 4,000 rpm. Towing is maxed out at 6,000 pounds with standard towing equipment, while mileage is pegged at 15 mpg city/22 highway in standard RWD trims and 14/20 in 4WD-equipped trims.

For more ponies in your powerplant, the VVT 5.0-liter V8 engine that adorns the LE V8 combines with the shiftable 5-speed automatic for 310 hp at 5,200 rpm and 388 lb-ft of torque at 3,400 rpm. Needless to say, towing capability improves to 7,000 pounds with the beefy V8, though mileage drops precipitously to 13/18 in the standard full-time-4WD-equipped LE V8.

The part-time 4WD system available to V6-toting Pathfinder trims, meantime, boasts electronic hi-lo gear selection and auto-locking hubs, and is designed to be disengaged while cruising dry pavement. The full-time 4WD set-up that’s offered in the LE trims is also equipped with hi-lo gearing and can be left engaged on dry pavement. Be advised, however, that neither system is well suited as a boulder-busting beast.

Testing found a 4WD-packing Pathfinder with the standard V6 galloping from 0-60 in a decently quick 7.4 seconds, while the LE V8 made the same trip in a lickety-split 7 seconds flat.

As is evident from the acceleration tests, reviewers note strong acceleration from both powerplants. The 5-speed automatic in either shiftable or full-automatic form is mostly adequate, though a few reviewers noticed that it has a tendency to hesitate in downshifting in trims packing the V6. Also noted is the V6’s tepid performance on hilly terrain, especially with a load on (people, payload and/or trailer). Additionally, a number of reviewers found the V6 sounding a tad uncivilized on heavy acceleration, though all concede that it quiets down considerably at highway speeds. Reviewers are quick to caution, by the way, that Nissan recommends burning only premium gasoline in both the V6- and V8-equipped variations of its 2012 Pathfinder.

Ride comfort in a truck-based SUV isn’t going to be plush, as virtually all reviews of the latest Pathfinder will reveal. Bumps and imperfections are handled better in most competitors, according to reviewers, and most reviewers note that as tire size increases in moving up the Pathfinder lineup, ride capabilities deteriorate exponentially.

Handling also becomes a bit of a challenge in the larger SUV category, and the Pathfinder offers little joy here, either. Reviewers note some hefty body roll and noseplow in even moderate cornering, though a few mention that steering remains tolerably precise and responsive. One review describes the Pathfinder as a notch or two better than most truck-based utes in this regard, but most declare that it’ll win few prizes for its overall agility. And again, a ponderous turning radius challenges tight parking lots.

Finally, brakes in this venerable SUV remain powerful and true, with no pedal anomalies, according to reviewers. In testing, a Pathfinder LE V8 came to a stop from 60 mph in 134 feet, which is pretty much average for its class.

The entry-level 2012 Pathfinder S sports standard skid plates, a trailer hitch and wiring and a roof rack outside, with cloth upholstery, a height-adjustable driver’s seat and reclining second-row seats gracing the cabin. Remote power door locks, power windows and power-adjustable outside mirrors again come standard on this base trim, as do cruise control and tilt-wheel steering. Of course, air conditioning, as well as a single-CD player with 6 speakers, also remains standard in this entry-level trim.

The higher-midlevel Silver Edition deletes the fold-flat front passenger seat, but throws in such standard extras as leather upholstery, heated power-adjustable front seats, remote keyless entry and ignition, and heated outside mirrors. Bose premium audio with 10 speakers, including a pair of subwoofers, a 6-CD changer and satellite radio, not to mention Bluetooth hands-free communications, also comes with this high-end version.

The LE, as the flagship of the V6-endowed Pathfinder fleet, adds simulated wood cabin trim accents, a power moonroof, a heated steering wheel, driver memory settings and, for 2012, a standard voice-activated, hard-drive-based navigation suite with real-time traffic. Meanwhile, its up-powered LE V8 sibling deletes the moonroof but, of course, revels in its peppy V8 powerplant.

Options for all trims include a vehicle impact sensor, wheel locks and an emergency road kit in the available Protection Package, while carpeted floor and cargo area mats are also optional in all trims. The Silver Edition remains eligible for the power moonroof, and both the Silver Edition and the LE trims remain in the running for an optional rear-seat DVD entertainment system.

Most reviewers find the Pathfinder to offer a pleasant enough interior, though many opine that the second and third rows of seating could be a wee bit more spacious. A high step-in means entry and exit to the rear seats also remains a bit complicated, according to many reviewers, while others complain that this sturdy ute’s cabin is beginning to show its age and that those high-set rear door handles can be challenging for shorter folks. All reviewers additionally find the gauges to be easily readable, but most would like to see fewer buttons cluttering the center stack. Alas, a number of reviewers also find wind and road noise to be disconcertingly loud at highway speeds.

The leather upholstery and simulated wood accents common to the higher trims, meanwhile, add immensely to cabin ambiance, according to most reviews, and seats remain long-haul comfy and supportive.

The National Highway Transportation Safety Administration (NHTSA) rates only rollover protection in this Nissan sport ute and gives it only a third-best 3 stars. The Insurance Institute for Highway Safety (IIHS), meantime, awards the Pathfinder its highest score of Good in front and side-impact tests, as well as seat/head restraint geometry, but gives roof strength and rear-end crash worthiness its next-to-worst rating of Marginal.

Though virtually all owners admit that gas mileage in the 2012 Pathfinder lineup is marginal, at best, most, especially those owners who drive the LE V8, are willing to sacrifice efficiency for brawn. Many owners, however, complain about the cramped third row, not to mention the ponderous ride and handling capabilities displayed in this midsize ute, while others admit that its dated image needs some serious refurbishing. Finally, a number of owners have issues with inadequate illumination from the headlights, while others complain that rear door handles are located too high for kids to reach and that the leather upholstery in higher trims looks a bit forlorn after only a few months of use.

Utility, towing abilities and passenger capacity, on the other hand, are all praised by the majority of Pathfinder owners, many of whom proudly flaunt its perceived lack of posh. The available 4WD is once more lauded by owners as eminently capable of overcoming moderate off-road challenges, while power and performance again remain high on the list of this ute’s owner-appreciated attributes. Lastly, owners again speak highly of the numerous standard creature comforts found in the higher trims, while many simply like the feeling of driving folks around in a for-real SUV.

What's your take on the 2012 Nissan Pathfinder?

Have you driven a 2012 Nissan Pathfinder?
Rank This Car

Where Is The Fuel Pump Relay On 2012 Nissan Pathfinder 3.0

Locked Inside 2012 Pathfinder And Could Not Unlock Doors. Everything Went B...

What would cause car to go dead, and doors nor able to unlock from inside. Battery is less than a year old

No heat unless moving.

car suddenly wouldn't start (turns over fine but not even trying to catch). Local shop said fuel pump not running, but when they tried temporarily plugging in a new fuel pump, it wouldn't run either. ...