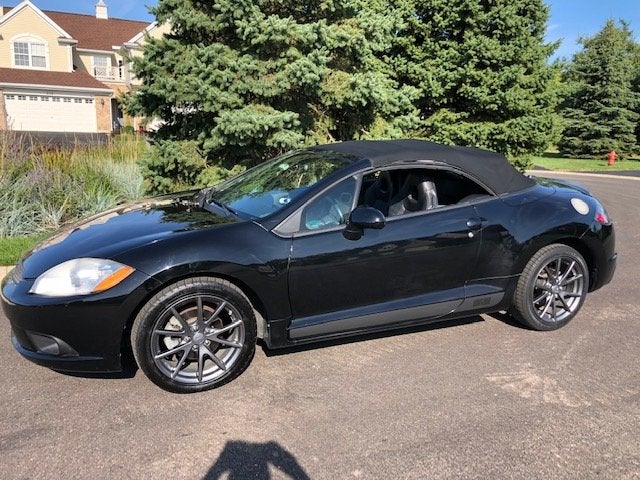 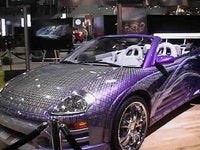 Quick, it’s your last chance to own one of the most overpriced, underpowered convertibles in history. Perhaps that's a bit harsh for the last year of the Mitsubishi Eclipse, but numbers don’t lie, and with the Mitsubishi Eclipse there have always been better options for less money. Lackluster sales and a new focus for Mitsubishi in general mean there’s no room for the Eclipse anymore. Considering Mitsubishi’s rather meager lineup, that’s a tough sell, but regardless of reason 2012 signals the end of the Eclipse.

The Spyder version of Mitsubishi’s sport-inspired hatchback coupe has always garnered particular appeal among misguided enthusiasts, willing to pay extra for exotic appeal as opposed to less for actual performance. Front-wheel drive (FWD) has never been a stalwart of the sports-car community, and automatic transmissions are anathema to driving enjoyment. You get both with the Eclipse Spyder. GS Sport and GT trims attempt to sound if not feel sporty, and they even look the part, too. Swooping curves and a rakish stance show off the style a sports car should have, but the equipment leaves you wanting more.

The Eclipse Spyder starts with the GS Sport trim, which offers heated leather seats, a 650-watt Rockford-Fosgate 6-CD stereo, Bluetooth, rear-view camera and 18-inch alloys. Unfortunately you also get a 162-hp, 2.4-liter engine yoked to a 4-speed automatic transmission. Sport doesn’t enter into it. Plus, with the convertible's extra 200 pounds over the coupe, the Eclipse Spyder loses even more of its zip, as well as some fuel economy. Here, with the 4-speed automatic, it drops to 19 mpg city/26 highway. The power convertible top is nice, however, dropping in a claimed 19 seconds, but the car's lack of passing power and a transmission that refuses to downshift robs much of the enjoyment out of it. The ride isn’t comfortable enough to make the Eclipse Spyder a top-down pleasure cruiser, and the engine isn’t powerful enough to make it a true sports car. And that’s aside from the dismal tranny.

So there’s the GT with its V6 – a 265-hp, 3.8-liter mill that gets a 5-speed automatic. It has a manual shift gate – as does the 2.4 – but it still doesn’t replace the fun a traditional three-pedal manual would offer and manages only 16/24 for fuel economy. More importantly, the GT Spyder pushes the price up over $32,000, which opens up many options for convertible sports cars, most of which have more power, get better mileage, offer a manual transmission and even cost less than the Eclipse. The GT adds automatic climate controls and a wind deflector, but it doesn’t even come close to offering the kind of value you’d get with a V6 convertible Mustang or Camaro, both of which cost less and offer more power and better gas mileage, not to mention the option of a traditional manual.

A slow, sad end for a car that once had so much potential. Over the years it was sold as an Eagle Talon and a Plymouth Laser, and it even starred in "The Fast and the Furious," but it never settled correctly. And before it finally dies, Mitsubishi has little to say in terms of commemoration. The only changes for 2012 include Brake Override logic, a new spoiler for the GT and one new exterior color.

Not big on goodbyes, Mitsubishi?

What's your take on the 2012 Mitsubishi Eclipse Spyder?

Shirl1970 You know the old saying, "dont believe everything you hear"? Well the negative review that you just read fits the saying perfectly. It is obvious the reviewer hasnt driven an Eclipse yet alone spent any meaningful time in one. Let me start by saying that I own 2 of these vehicles. An 06 GS 4 cyl to commute with for the past 7 years without ONE single problem and a beautiful newly used 11 Spyder GT.

Shirl1970 The fwd will come in handy too if you decide to drive the car in the snow. Last winter I had a ball watching cars and mini vans struggle to make snowy slippery hills while I zipped by with ease. In my opinion, these are the most well-rounded vehicles produced in terms of comfort, sport, practicality, reliability, beauty, and fun factor! I highly recommend getting one. You won't be disappointed, especially if you opt for a powerful GT. And dont forget the 650 watt Rockford Fosgate system. Good luck finding your beauty!

mikeformitsu Have an '07 Spyder GT and it's a blast to drive. I also get 20-27mpg, so I don't understand the critics. I didn't buy it to race it, just enjoy it...and I do. I initially bought it because I wanted a convertible and, at the time, it was the best looking one out there. And I concur, the FWD is a blessing in the snow. Sometimes I wonder exactly what these critics look at.

GuruVLK3 I absolutely LOVE my 2012 Spyder!! I wouldn't drive any other car!!! Sad no one else will experience the beauty and fun this car has to offer!! She belongs in Florida and that is exactly where she is going in 79 days when i retire! :-) I'm just trying to decide on Shipping her or Driving her down! Don't want to rack up the miles. This critic hasn't a CLUE!

Have you driven a 2012 Mitsubishi Eclipse Spyder?
Rank This Car

I recently purchased a used 2012 Mitsubishi eclipse spyder gs sport with automatic transmission. It's running great, but when I put the top up and close the latches in place then go to drive the indi...

I recently purchased a used 2012 Mitsubishi eclipse spyder gs sport with automatic transmission. It's running great, but when I put the top up and close the latches in place then go to drive the ...

Need to know if you can flat tow a 2012 Mitsubishi eclipse spyder gt on a RV?

How Much Is A New Alternator On A 2012 Mitsubishi Eclipse GS Cov?

At What Point Should My Mitsubishi 2012 Spyder Indicate Low Oil