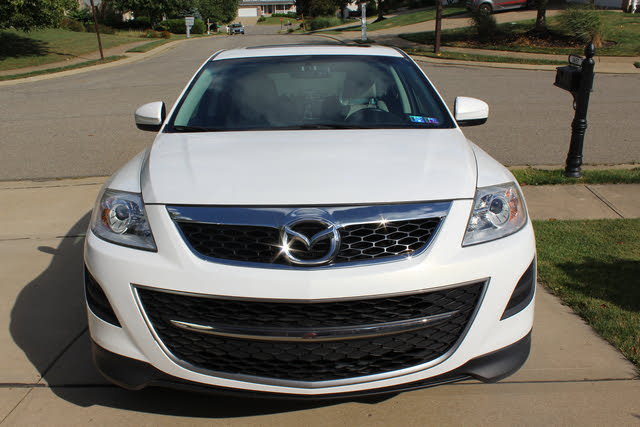 Mazda's 7-passenger CX-9 carries into 2012 with exceptionally minor changes under the hood. So minor, in fact, nobody dares mention precisely what those changes were, because that would mean unearthing a rather ugly history.

Currently under investigation for problems with a mysterious brake fluid leak and two recalls already under its belt, the history of the CX-9 is riddled with questionable manufacturing. Given the nuclear fallout in Japan and certain complications with spiders nesting in rubber tubes manufactured for the Mazda6 in early 2011, these new developments have caused many drivers to think twice before considering any Mazda, let alone the recall-ridden CX-9.

However, the redesign due for 2013 could prove to be the pudding of Mazda's comeback—and what an amazing comeback story it could become if 2012 CX-9 owners are correct. Drivers of the latest version seem to agree that its only detriment is its plastic overload and a few feature oversights.

Well, five primary feature oversights. The rear liftgate does not open manually, preferring to open only by button command. Driver memory works only for the seats, not the mirrors. The contacts manager in the Bluetooth phone system doesn't allow the user to enter phone numbers and names without first receiving a call from that number. The backup sensor is purely visual, lacking any sort of sonar or audible warnings, and last but probably least, the factory-installed GPS does not show highway speed limits.

Whatever your opinion, you're best making up your mind after a test drive. The hallmark spirited feel and ride of the Mazda make is definitely present in spades for the CX-9. Although it doesn't have the technological infusion of its Ford competition or the upscale ride of its GM competition, the CX-9 likewise misses out on a near $10,000 difference in the price tag while still offering able performance and competitive features.

Speaking of features, even the base Sport offers full power accessories, tri-zone automatic climate control, keyless entry, a leather-wrapped tilt-and-telescoping steering wheel, and a 6-speaker CD player with Bluetooth connectivity and an auxiliary audio jack. Stepping up to the Touring will fetch features like heated mirrors and heated front seats, while the top-of-the-line Grand Touring offers keyless ignition, automated comforts like rain-sensing wipers and dimming mirrors, driver's-seat memory and a blind-spot warning system alongside some wooden interior accents.

Every comparable figure is pretty much on par with the competition's, from cargo capacity to acceleration and fuel economy. Although some drivers long for something better than 17 mpg city/24 highway, the CX-9 does such an amazing job at impersonating a small car with big functionality that drivers are quick to overlook this relatively small setback.

With 273 horses on tap and the ability to tow 3,500 pounds when properly equipped, the all-wheel (AWD) or front-wheel-drive automatically shifted CX-9 provides ample performance for every large-family need, so long as those needs have regular roads between here and there. Grip it has—off-road stability, not so much.

We bought a used 2012 Mazda CX-9 Grand Touring suv, it has a moon roof, it looks like it should open and I cannot figure out how to open it. HELP!

The fuel pump died on my 2012 Mazda CX-9. Had a shop replace the fuel pump (Part FG1715). Apparently this model also has a separate Fuel Tank Sending Unit as well which was also replaced (FG264A...

After a heavy rain water collects on the driver side floor of my 2012 Mazda cx9 suv.

i was asked about offering a warranty on the car I"m selling via Cargurus...

Tow Rating. Which Is Correct?