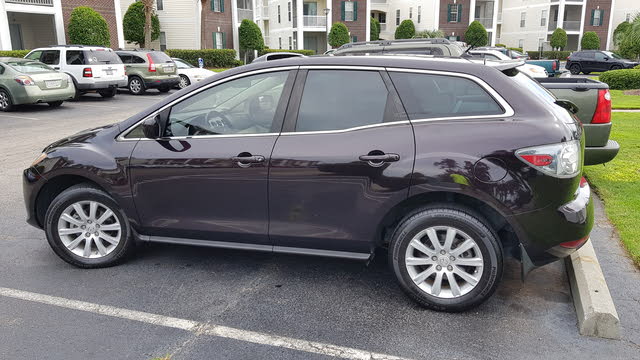 The 2012 Mazda CX-7 crossover vehicle delivers one of the most spirited rides in its class, with agile handling, precise steering and good performance, especially when equipped with an available turbocharged 4-cylinder engine.

Currently in its last year of production, the CX-7 receives no new features for 2012, and some reviewers say its exterior styling and cabin layout are dated, while interior cargo space and rear-seat legroom lag behind when measured against competitive vehicles.

A bit of a misfit in Mazda's lineup, the CX-7 will disappear after 2012, making way for the trimmer, more fuel-efficient CX-5. Routinely a favorite of automotive reviewers due to its sporty handling and performance characteristics, the CX-7 receives mediocre marks from those same reviewers when it comes to interior roominess and cargo capacity. Still, buyers who seek an affordable, fun-to-drive family hauler might find some good deals on the CX-7 before it zoom-zooms off into the sunset.

Introduced in 2007 and now in its final year of production, the Mazda CX-7 crossover vehicle straddles the line between a compact crossover vehicle and a larger crossover SUV. Because it didn't fit appropriately into either category, sales were soft, so Mazda decided to replace the CX-7 in 2013 with the smaller CX-5 crossover vehicle, which comes equipped with the automaker's latest Skyactiv Technology. However, reviewers give the CX-7 high marks for its solid performance and agile handling, and buyers seeking a good deal on a sporty, functional family carrier might want to grab the CX-7 before it disappears from dealer lots.

Not surprisingly, as it reaches the end of its production run, the CX-7 remains unchanged for 2012. Mazda continues to offer the CX-7 in base i SV, mid-range i Sport, well-equipped i Touring and s Touring, and top-shelf s Grand Touring trim levels. The i SV, i Sport and i Touring ride on front-wheel-drive (FWD) platforms, while the s Touring and s Grand Touring are available with FWD or all-wheel drive (AWD). Both platforms are designed to provide a sports-car feel, and most reviewers agree that the CX-7 delivers the best ride in its class for its price. However, when it comes to interior space and functionality, the CX-7 lags behind some competitors, which include the Honda CR-V, the Toyota RAV4, the Hyundai Santa Fe, the Chevrolet Equinox, the Kia Sorento and the Nissan Murano.

Power for the 5-door, 5-passenger CX-7 comes from either a 2.5-liter 4-cylinder engine, which drives the i trims, or a turbocharged 2.3-liter powerplant, which provides good performance for the s trims. The exterior of the CX-7, which was last revised in 2010, appears slightly dated, although the swooping aerodynamic lines still catch the eye. Design highlights include a rounded nose with a distinctive 5-point lower mesh grille, a steeply raked windshield, pronounced wheel wells and a streamlined rear end with a roof spoiler and distinctive taillight cluster. All trims receive power-adjustable side mirrors, and both the Touring and Grand Touring get dual stainless steel exhaust tips. The Grand Touring also includes HID headlights, heated side mirrors with side marker lights, chrome door handles and rain-sensing front windshield wipers. 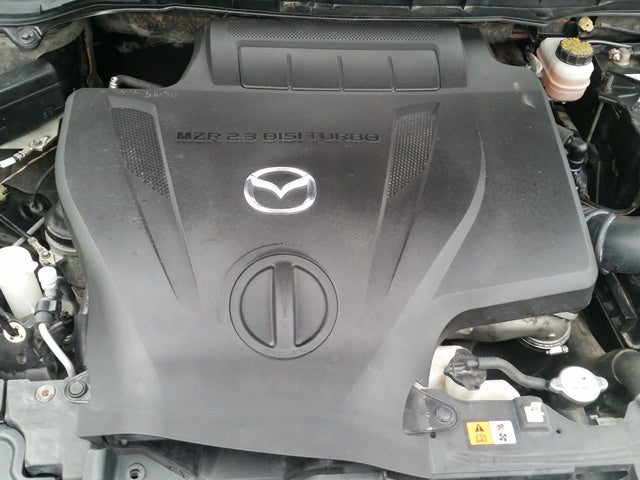 The base 2.5-liter 4-cylinder engine, which continues to drive all CX-7 i-designated trims, produces 161 hp and a matching 161 lb-ft of torque. As in previous years, the engine links to a 5-speed automatic transmission with a manual-shift mode, and posts fuel economy numbers of 20 mpg city/28 highway. When properly equipped, the CX-7 with the base powerplant can tow up to 1,500 pounds.

For sportier performance, the CX-7 s-designated trims get the turbocharged 2.3-liter 4-cylinder engine, which develops a healthy 244 hp and 258 lb-ft of torque. The turbo engine mates to a 6-speed automatic transmission, also with a manual-shift mode, and manages fuel economy numbers of 18/24 mpg for FWD trims and 17/21 for AWD trims. When equipped with the turbocharged powerplant, the CX-7 can tow up to 2,000 pounds. Both engines run on regular unleaded fuel, although Mazda recommends premium gas for the turbocharged engine to ensure optimal performance.

Testers agree that both engines deliver a solid punch of performance, resulting in a sporty ride that makes the CX-7 a standout in its class. In fact, most reviewers agree that only the Volkswagen Tiguan matches the CX-7's performance, although at a heftier price. However, many note that the CX-7's solid performance comes at a cost in fuel economy, which lags when compared to the numbers from some competitors. The CR-V, for instance, gets up to 31 mpg, and the Santa Fe gets up to 33 mpg.

The automaker's optional Active Torque Split all-wheel-drive system delivers power to all 4 wheels for optimal handling in all types of driving situations. The system includes multiple sensors, which monitor the road and distribute power to the front and rear wheels as needed.

The CX-7's well-tuned suspension was designed to get the most out of the two powerplants, and testers give the crossover vehicle high marks in this category. Agile and competent, the CX-7 alters pace and direction easily, with an overall stable feel. The power rack-and-pinion steering provides good feedback, and a variable-assist feature increases steering responsiveness as the driving situation becomes more aggressive. However, prospective owners should note that Mazda has tuned the CX-7's suspension for a firm ride, which might become uncomfortable for families over long distances. Some testers also find the ride harsh over rougher road surfaces.

While the CX-7 excels in performance and handling, it lags behind some of its competitors when it comes to interior roominess, backseat legroom and cargo capacity. Most reviewers like the CX-7's interior build quality, although some find the cabin materials a little too plasticky. Seats are generally comfortable, and all but the tallest passengers will find plenty of headroom and legroom in the front. Similarly, most adult passengers will be comfortable in the second-row seat, although taller individuals might have to squeeze in a little. Most testers like the CX-7's interior layout, but the controls get mixed reviews for their location and ease of use, especially controls for the optional navigation system.

The 2012 CX-7 comes equipped with a solid list of standard features that includes air conditioning with front and rear ducts, remote keyless entry, an exterior temperature display, power windows and door locks, dual illuminated visor mirrors and a tilt/telescopic steering column with steering-wheel-mounted audio and cruise controls. Mazda also includes a multi-information display with a trip computer and audio information, and a 4-speaker audio system with a CD player and an auxiliary input jack.

The i SV and i Sport come standard with cloth seats, while the Touring and Grand Touring trims receive leather upholstery. All trims except the i SV get a leather-wrapped steering wheel and shift knob, as well as Bluetooth. The Touring and Grand Touring trims upgrade to such features as automatic climate control, a rear-view camera, an 8-way power-adjustable driver's seat and a 9-speaker Bose Centerpoint Surround Sound audio system with a 6-CD changer and SiriusXM satellite radio, while the Grand Touring also includes Piano Black accent trim, a 4-way power-adjustable passenger seat, an auto-dimming rear-view mirror, blue indirect lighting, an ignition start system and a compact navigation system.

The IIHS gave the 2012 Mazda CX-7 a top safety rating of Good for protecting passengers in frontal and side-impact crashes, although it received only a Marginal rating for protecting passengers in rollover crashes and was not tested for rear-impact crashes. The NHTSA gave the CX-7 4 out of 5 stars for rollover crashes, but did not test the vehicle for other types of crashes.

Mazda equips the CX-7 with a full range of airbags, including front side-impact and side air-curtain airbags. Other standard safety features include a Dynamic Stability Control system, which adjusts engine torque and applies individual brakes as needed to help drivers maintain control of the vehicle, as well as traction control and 4-wheel antilock brakes with electronic brakeforce distribution and brake assist. In addition, the Grand Touring gets a blind-spot monitoring system.

Owners find a lot to like about the CX-7, including its sporty handling and functional interior, as well as its good overall value. Those who have shopped around and compared vehicles say comparably equipped competitive vehicles cost several thousand dollars more than the CX-7. Also, owners say, since the vehicle is in its last year of production, numerous incentives are available. Owners give good marks to the the CX-7's exterior styling, and most say it provides plenty of space for their gear. They also like the vehicle's performance, and most are fine with its fuel economy numbers. Some find fault with rearward visibility from the driver's seat, while others note some engine and exhaust noise. But overall owners are very happy with the CX-7's sporty handling, affordability and practicality.

Kaptkool81 My wife bought this SUV for her use and it's a vehicle, however; the interior room for a tall person is cramped. I'm 6'3" and 265 . pounds. Overall good mileage and engine power

Have a Sattelite ready receiver can sattelite radio use stock roof antenna or i need the ugly sirius antenna(square box) have a Mazda 3 and Satellite radio using stock antenna, are there different a...