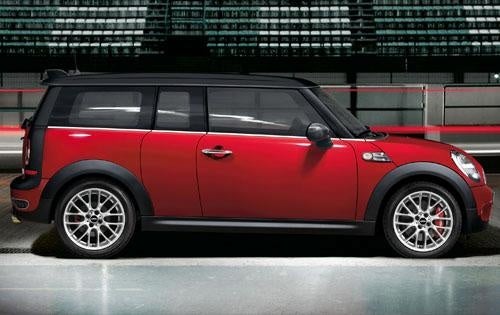 The MINI Cooper lineup expands for 2012 with the addition of new 2-seat Coupes and Roadsters, and the automaker launches a new MINI Yours program, which offers a wide range of customization options, giving new owners a chance to individualize their rides.

Interior storage spaces are in short supply, rear-seat legroom remains tight and some owners find the seats uncomfortable in the 2012 Cooper.

The 2012 MINI Cooper appeals to a specific type of driver, and for those particular owners, it perfectly fits the bill. If go-kart-like handling, quick-as-a-whip acceleration, surprisingly good fuel economy and sporty styling with a vast array of customization options meets your criteria as you're car shopping, head straight to your MINI dealer. If you put a premium on cargo space, long-range seat comfort and interior storage spaces, you might want to look at some competitive vehicles, such as the Volkswagen Golf or the Fiat 500.

A year after a mid-generation refresh in 2011, which included exterior and interior updates as well as a slight boost in horsepower, the MINI Cooper welcomes a number of new trims to the lineup for 2012. The new MINI Cooper Coupe and Roadster trims seat 2 passengers, since the automaker has removed the second-row seats. Designed for a sportier driving experience, the 2-seat body style also provides more cargo space behind the front seats than the 4-seat versions. The new Roadster trims come equipped with a manually operated soft-top roof designed for easy operation.

In addition, MINI launches its new MINI Yours program, which offers a variety of exterior paint colors, custom wheel options, premium seats, interior trims and colors, accessories and even full special-edition trims. Designed to cement MINI’s reputation as a one-off, premium-choice vehicle for the style-conscious in the small-car segment, the available options mirror those for many higher-end cars, reflecting the associations MINI has with parent company BMW and sibling Rolls-Royce.

For 2012, the MINI Cooper comes in 2-door Hardtop hatchback and Convertible body styles, as well as in the new Coupe and Roadster styles, at Base, S and John Cooper Works trim levels. All are powered by different versions of a 1.6-liter engine, with performance improving at each trim level.

Exterior features for the MINI Cooper remain unchanged from the previous year, which saw updates to the front fascia, hood, foglights and taillights, as well as to the wheels. The new Coupe and Roadster carry forth design elements that extend throughout the lineup, including large circular headlights, a hexagonal chrome-slat grille, stacked taillights and a chrome exhaust pipe. The Roadster also displays a number of unique exterior features, including a more dramatically raked windshield and a unique rear trunk design, while the Coupe receives a rear spoiler and an aerodynamic "helmet roof" design.

Competitors include such vehicles as the Fiat 500, the Ford Fiesta, the Volkswagen Golf, the Toyota Yaris and the Scion xD. Some competitors, such as the VW Golf and the Fiat 500, offer more interior cargo space, but when it comes to performance and handling, the MINI Cooper tends to run away from the competition. 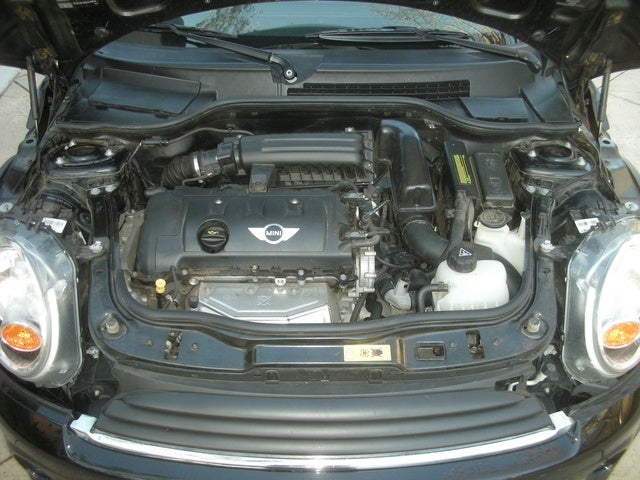 The MINI Cooper's powerplants roll over from the previous year unchanged. The Base trims, including the Base Cooper Hardtop, Base Convertible, Base Coupe and Base Roadster, continue to receive a 1.6-liter, 4-cylinder engine, which generates 121 hp and 114 lb-ft of torque. While that might seem on the mild side for a performance-oriented vehicle, it’s more than enough to capably move the MINI along at a good clip. When paired with a Getrag 6-speed manual transmission, which comes standard, the MINI jumps out from 0-60 in just 8.4 seconds and still manages fuel economy numbers of 29/37 mpg. When linked to an optional Aisin 6-speed automatic, acceleration drops slightly, with the jaunt to 60 taking 9.7 seconds. Fuel economy numbers clock in at 31/36.

The S trims, including the Cooper S Hardtop, the S Convertible, the S Coupe and S Roadster, get a turbocharged, intercooled version of the 1.6-liter engine with direct injection. It develops 181 hp and 177 lb-ft of torque, and with the temporary overboost engaged, torque bumps to 192 lb-ft, pushing the S trims to 60 mph in 6.6 seconds when paired with the 6-speed manual transmission. Fuel economy numbers drop slightly to 29/34 mpg with the manual and 30/35 with the automatic.

For those who prefer the ultimate performance experience from a small car, the John Cooper Works trims boast a high-output, turbocharged and intercooled version of the 1.6-liter engine, which pumps up horsepower to 208 and torque to 192 lb-ft. That's enough to drive the MINI Cooper from 0-60 in just 6.2 seconds when equipped with a sport-tuned version of the 6-speed shifter, the only transmission available on these trims for 2012. Fuel economy numbers still manage a respectable 28/33 mpg.

Due to the MINI's relatively light 2,500-pound curb weight, all engines, including the base powerplant, provide plenty of power. However, some testers found the base engine a little slow off the mark when equipped with the automatic transmission. Some also criticize the automatic for rough operation. As a result, most testers prefer the manual shifter.

All MINIs offer a slightly stiff ride, with the larger tires and more aggressive setups of the S and JCW trims making the ride progressively stiffer and harsher. However, as a reward you get one of the most responsive, best-handling cars on the market. The automaker describes the MINI's ride and handling as "Go-Kart-like," due in part to the MINI's wide stance, short length and lack of overhangs. Testers agree, saying the steering is crisp and precise, and the vehicle is well-balanced with minimal body lean, making it easy to toss the MINI around corners. The convertibles exhibit some flex in corners, according to reviewers.

The front-wheel-drive MINI Cooper rides on a fully independent MacPherson strut suspension with a multi-link configuration in the rear, and front and rear anti-sway stabilizer bars. The Cooper S trims have stiffer shocks and springs than the base trims, while the JCW trims beef up the shocks and springs even more, pushing the MINI Cooper's driving dynamics so that it approaches the level of a true commuter sports car. In addition, the JCW trims add Brembo brakes, and they ride slightly lower than the S trims, delivering a lower center of gravity, with more direct handling and more road feel transmitted to the driver.

A Sport button in all MINI Coopers adjusts settings for tighter steering and quicker acceleration. JCW trims also offer three selectable driving modes designed to improve traction and handling. In addition, in Cooper S and JCW trims, the exhaust makes a distinctive popping sound during deceleration to add to the performance-oriented driving experience.

Base MINI Cooper trims receive 15-inch alloy wheels with all-season or performance tires, while the S trims get 16-inch alloy wheels with run-flat tires. JCW trims come equipped with 17-inch Challenge Spoke alloy wheels. In addition, through the MINI Yours program, owners can opt for a variety of available wheel sizes and designs to customize their vehicles.

The MINI Cooper's unique retro-style interior further distinguishes it from competitors. Overall, reviewers like the look, although some say it can be distracting for drivers who should be keeping their eyes on the road rather than searching for the air-conditioning controls. A large center-mounted speedometer, which dominates the dash, mimics the placement of instrumentation in MINI rally cars, and also displays the fuel gauge, warning lights and radio tuner. A number of controls and switches use chrome-finished toggles, also a throwback to the MINI's rally-car design.

With its short wheelbase, the 4-passenger MINI Cooper puts a premium on cabin space. Front-row passengers will find comfortable seats and adequate legroom, but adult passengers will find the rear seat especially cramped, with little room to stretch out. The front seats on base trims feature 6-way manual adjustment, while S and JCW trims upgrade to bolstered sport seats, also with 6-way manual adjustment. Leatherette upholstery comes standard in the Base and S trims, while the JWC trims get cloth upholstery. Owners can add available Recaro sport seats or leather upholstery as well as heated front seats as options on all trims.

Standard features for all MINI Cooper trims include a leather-wrapped, tilt/telescopic steering wheel with audio and cruise controls, a start/stop button, remote keyless entry and an onboard computer with trip information and outside temperature. A 6-speaker AM/FM audio system with a CD player, HD Radio, Bluetooth, speed-sensitive volume and a USB port also comes standard. Air conditioning, a climate-controlled glove box and power windows and door locks are among the other standard features.

Beyond that, owners have a wide range of customization options. In addition to a variety of leather seating options, the automaker offers such available features as a sport steering wheel, a customized instrument cluster, navigation with a 6.5-inch color display, a dual-pane power panoramic sunroof, Sirius satellite radio and a Harman Kardon sound system. Owners can also opt for a choice of interior trim, including English Oak, brushed alloy, carbon fiber and chrome.

The MINI Cooper consistently remains popular with owners and enthusiasts who relish a sports-car driving experience from a small vehicle. Performance, handling and styling remain the dominant reasons owners chose the MINI Cooper, with a great number reporting that they're impressed with the vehicle's acceleration and toss-about ability as well as its good fuel economy. Typical owners don't mind the lack of rear-seat legroom and cargo space, with some keeping the rear seatbacks folded down to make it simpler to carry around groceries, gear and pets. Owners also appreciate the ease of parking, due to the MINI Cooper's short wheelbase.

Interior space remains the MINI Cooper's biggest drawback, owners report. Some say the cupholders are too small, and others have trouble finding a place to store small bags or purses when the passenger and second-row seats are occupied. In addition, a few note that the seats are uncomfortable. But overall owners like their MINI Coopers, with some saying they traded in much larger vehicles for their smaller yet sportier rides.

Users ranked 2012 MINI Cooper against other cars which they drove/owned. Each ranking was based on 9 categories. Here is the summary of top rankings.

Have you driven a 2012 MINI Cooper?
Rank This Car

Last week I noticed in my shift display that it was changing from D to DS randomly, without moving the stick. Now this week, if I move the stick to the left into manual mode, nothing happens. And...

Can anyone tell me what the deal is with having to have the battery "serialized" to the car's computer? The dealer said the car would have drivability problems and might not even run if the battery wa...

Where Is The OBDII Port On My Mini Cooper D 2012 London Edition Car?

Should I Use PayPal For Payment?

I have someone interested in purchasing my car and they want to send a deposit on PayPal then send the rest when they schedule a pick up is this something I should consider?

26 views with 5 answers (last answer about a year ago)

How Do I Get My Mini Started

I have a 2012 Mini Cooper S, manual transmission, that does not recognize the key when I insert it into the dash. Nothing on the dash lights up and there are no noises. The start button lights up (...