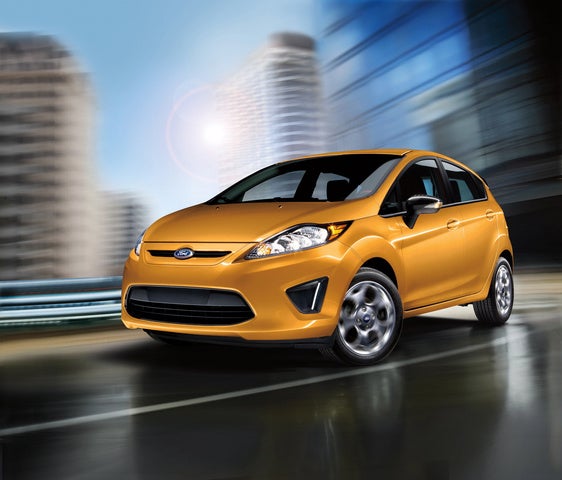 Average user score
4.4 ⁄ 5 stars
Based on 10 reviews
Fantastic Little Car by David — Purchased this car in July of 2012 to replace my Jeep Cherokee. Was purchased for $17,500. Mine is an SE hatchback model with cruise control, Sync, Premium Stereo, LED parking lamps, and 15 inch wheel... Read more
Review by Kyletenny86 — So far, the car drives smooth. There are no problems. The title is clean. My only gripe with the car is that the Bluetooth audio doesnt work when synced to my phone. Ill probably have to do some troub... Read more
Review by Sara — I absolutely love this compact car! I get 36.3 mpg!! There is nothing I dont love about this vehicle. Read more

A surprisingly well-wrought cabin, compelling agility and ride characteristics, wallet-friendly gas mileage, a quality fit and finish and a plethora of techno-goodies in the higher trims make the 2012 Ford Fiesta a worthy choice for the small family or the frugal commuter.

The lack of a factory-installed navigation system exacerbates such shortfalls as cramped rear seating, some illogically placed controls, tepid acceleration with the available 6-speed auto-manual transmission and a Spartan Base trim.

Perhaps not as refined as some, the 2012 Ford Fiesta lineup nevertheless stands out in a niche woefully short on pulse-pounding performance, edgy design and all-around versatility. This little sedan/hatchback combo is one of the reasons that Ford has managed to avoid the stigma of near-destitution and remains a popular choice for the more budget-conscious driver with a yen for a bit of panache and some plain old fun on the way to work.

Ford has a winner with the 2012 Fiesta lineup. This little 5-passenger subcompact, offered in both a sedan version and five-door hatchback guise, remains pretty much unchanged from 2011 and is certainly easy on the eyes and on the fuel budget. Don’t be fooled by its oh-so-innocent appearance, though. Both versions offer plenty of techno-gizmos in the higher trims, and, surprising in their class, both are claimed to be a hoot to drive. The sedan trims offers a somewhat cramped 12.8 cubic feet of trunk space, but the hatchback opens up a respectable 26 cubic feet of cargo area with the rear seats folded. Until the Fiesta arrived in 2010, most folks perceived the sub-compact as a necessary evil in trying to squeeze a few extra miles out of a tank of gas. Ford’s small family-car-cum-commuter represents what many reviewers note may be the most utilitarian vehicle of them all.

In its sedan cloak, the 2012 Fiesta can be delivered in the base S, midlevel SE or top-shelf SEL trim, while the hatchback version comes in either the SE or upscale SES variation. All are front-wheel-drive only, all offer the same inline 4-cylinder (I4) powerplant, and each is available with the choice of a standard 5-speed manual transmission or dual-clutch auto-manual transmission. Curiously, unlike most auto-manual transmissions, the Fiesta’s 6-speed doesn’t offer a true manual shifting mode, a fact that sits uncomfortably with a few reviewers.

In any case, since its debut, Ford’s scrunched-up sedan/hatchback duo has battled Honda’s well-received Fit hatchback, and lags its Asian rival in overall refinement and cabin ambiance. The Fiesta does, however, offer a bit more driving pizzazz and a lower initial cost, with its base MSRP hovering around $13,200. If some extra tire-kicking is in order, however, Chevy’s comparably priced Aveo sedan, Hyundai’s competent Accent sedan or hatchback, the quirky Nissan Cube hatchback and the even quirkier Kia Soul ought to be on the list. 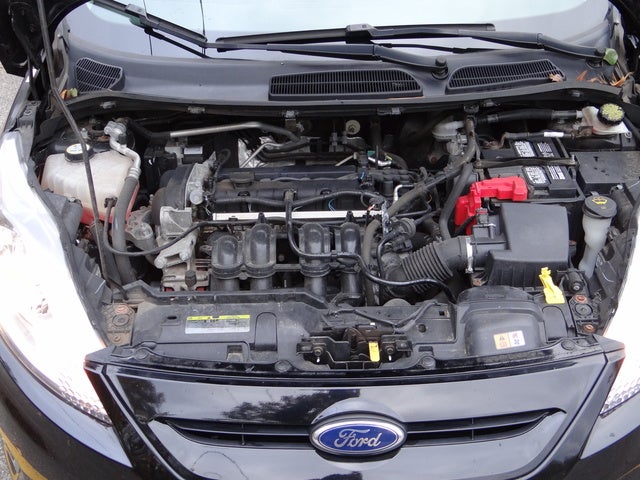 Only a single 1.6-liter I4 engine is offered for the entire 2012 Fiesta lineup. Standard with the four-banger is a 5-speed manual transmission, with a dual-clutch 6-speed auto-manual transmission available for all trims. No matter the transmission, Ford’s front-wheel-drive-only (FWD) subcompact puts out 120 hp at 6,350 rpm and 112 lb-ft of torque at 5,000 rpm. Expect, therefore, to do little trailer-towing with this pint-size commuter car. Do expect, however, nearly hybrid-like mileage figures of 29 mpg city/37 highway with the stick shift and 30/40 with the auto-manual transmission, numbers that are near the top of its class. Meanwhile, a driver-selectable “low” setting in the non-shiftable auto-manual transmission is mentioned by a few reviewers as a handy item for providing a quicker response in all driving situations.

Most reviewers find the Fiesta’s four-banger perfectly adequate for most driving situations, though a bit of foresight is recommended in passing and merging on the highway. The 5-speed stick is admired by several reviewers for its tight throw, shallow clutch and precise response. The 6-speed auto-manual, on the other hand, leaves a bit to be desired in its tendency to overstay its welcome in the higher gears at low speeds, and will, according to several reviews, necessitate a bit of getting used to in momentarily resisting a prudent downshift when needed. Finally, reviewers note a bit of ruckus from the four-banger on middling-to-hard acceleration, but find it calms down nicely at cruising speeds. One test of the I4 has it going from 0-60 in a somewhat pokey 9.5 seconds, but then this little chariot isn’t exactly a Lotus. Finally, tire kickers should be aware that the Fiesta is available only in front-wheel drive (FWD).

Lauded by virtually all reviewers for its nifty handling characteristics, the 2012 Fiesta offers what most call the most responsive electronic power steering in its class. Complementing the balanced feel of the wheel is a front independent suspension with MacPherson front struts, front and rear stabilizer bars and a rear torsion bar suspension system that reduces body lean to nearly zero in fast corners, yet still offers a silky, if not quite plush ride.

The Fiesta S and SE trims offer 15-inch steel wheels, with the SEL sedan and SES hatchback boasting 16-inch painted alloy wheels and all-season radial tires. Reviewers note that road imperfections are by and large well damped no matter the tire size, with several reviews rating the Fiesta’s ride superior to that of Honda’s well-wrought Fit, though the Fit Sport trim may trump the Fiesta in pure agility. Finally, the Fiesta’s braking system is lauded by virtually all reviewers as powerful and true, with no noticeable pedal anomalies.

Regarded by most reviewers as more occupant-friendly than is traditional for its class, the 2012 Fiesta’s cabin boasts clear gauges with most, though not all controls are logically located and well-marked. Extra padding on parts of the dash and on armrests is complemented by hard plastics that, according to nearly all reviewers, are surprisingly pleasant in both appearance and fit. Headroom is generous in front for average-size adults, though legroom is cramped for 6-footers, and the lack of a center armrest irks a few reviewers. Rear-seat occupants, alas, even average-size adults, will find legroom at a premium if the front seats are pushed only halfway back, say most reviewers. Seats are described by most reviews as comfortable and reasonably supportive, while visibility is noted as excellent all around in the sedan, but not quite as good in the hatchback with its expansive rear roof pillars. Many reviews make much of the fact that two-tone upholstery is available in some color combinations and that the pseudo-alloy accents in the higher trims give the Fiesta’s interior a bit of added posh.

The National Highway Traffic Safety Administration (NHTSA) gives the 2012 Fiesta its second-highest four-star rating in overall safety, as well as in front impact and rollover protection. Side-impact protection is given its highest five-star rating.

The Insurance Institute for Highway Safety rates the virtually identical 2011 Fiesta one of its Top Safety Picks, earning their highest score of Good in front and side impact testing as well as roof-strength tests.

A lack of acceleration tops the list of owner complaints with the 2012 Fiesta. What are thought to be poorly positioned headrests and too-short seat cushions also discomfit a number of owners. Further glitches that owners mention are poor rearward visibility in the hatchback trims, a lack of accuracy regarding gas mileage in the trip computer, the unavailability of an integrated navigation system and the fact that this subcompact sits so low to the ground as to cause a bit of worry about bottoming out.

On a more positive note, owners laud the fuel efficiency in the four-banger, with some calling it best-in-class. Cabin comfort, exterior styling, a livable base price and a cornucopia of standard and optional techno-gizmos in the higher trims also have most owners effusive in their praise. Finally, numerous owners give kudos to Ford’s nifty little Fiesta for its sporty handling, quiet cabin and over-the-top safety scores, and more than a few are perfectly at ease with the hatchback’s added cargo capability.

robstarseven Caution to anyone buying one of these vehicles! I have owned a Fiesta SfE hatch from the beginning. It has had a complete tranny replacement already, and two more visits to the dealer, all due to the transmission having problems. The model I own is the 6 speed auto, and in my mind, is a very poor design. This design in transmission apparently can be found in 2011 year models of the Fiesta and 2011/2012 year models of the Focus. Yes, the gas mileage is nice, sometimes in the mid 40's. The main problem with the transmission is when you are at a stop sign, and then begin to accelerate, the transmission will slip out of gear, leaving you in oncoming traffic for an indefinite period of time. This has happened again and again, even after the complete transmission replacement. Sorry, but I will be getting rid of this vehicle. I don't want the headache anymore.

GuruV7WDS The same happened to me. I find this review misleading, to say the least. I am stuck with this piece of crap. Carmax would only give me 700... and it's in GREAT shape. I also have the tranny changed. This car is pure shit and shame on Eric Tallberg for such misleading review.

Users ranked 2012 Ford Fiesta against other cars which they drove/owned. Each ranking was based on 9 categories. Here is the summary of top rankings.

Have you driven a 2012 Ford Fiesta?
Rank This Car

Hi there, Is it possible for the air bags to pop out without a collision. Domething stramge happened to me on wednesday 4th Dec on my way back from work as ot was peak hour there was heavy traffic ...

I'm looking at a 2012 Fiesta with a manual trans. I now the autos were a nightmare but what about the reliability with the 5 speed?

My car won’t start was running her a noise like I ran over a stick saw nothing kept driving turned and herd it again then pulled over to look then all lights came on on dash board shut off car th...

Ford figo 1.4 tdi egine 2012 model, no starting problem, when driving some time engine off then i re start it will working, why this happened?

Car battery is dead the keyfob and key will not openi door ,How do you get it to unlock ?