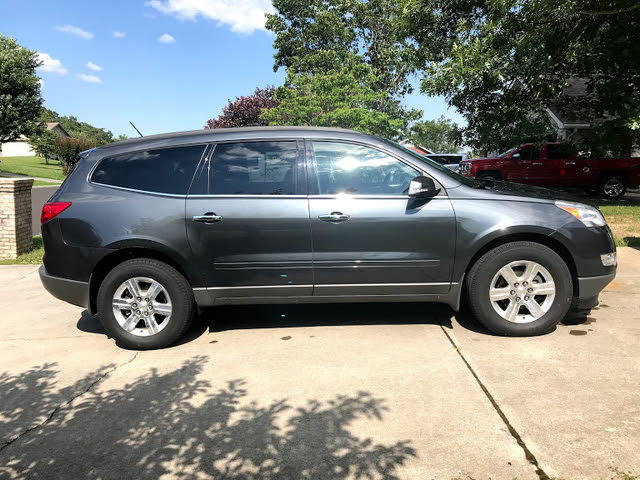 A ton of cargo space, an adult-compatible third-row seat, some surprisingly adept ride and handling characteristics, top safety ratings and a roomy cabin all make the 2012 Chevrolet Traverse worth a look.

Some low-rent cabin materials, a Spartan base trim and a rather bland driving experience won’t endear the somewhat pricy 2012 Traverse midsize crossover to those with stratospheric standards.

With room for the whole gang, lots of load space, a peppy V6 and 3 rows of seats, the 2012 Chevy Traverse defines the family-oriented crossover niche. Sure, it’s not exactly track ready, and it’s no doubt a tad expensive, but for hauling a lot of people and stuff around, and looking good doing it, few vehicles on the market can match this impressive ute.

When the hockey team has to get to a game, coaches can count on the 7- or 8-passenger 2012 Chevrolet Traverse crossover to come through. This midsize ute, with its best-in-class 116 cubic feet of total cargo area available when the rear seats are folded, still packs 24.4 cubic feet of cargo space behind the upright third-row seat. Even with the entire squad aboard, this sizable crossover shouldn’t have any problem toting the equipment either, though goalie sticks and pads might have to ride the standard roof rack on top. Of course, wintry weather is as much a part of hockey as hip checks, but fear not, the Traverse can be delivered with available full-time all-wheel drive (AWD) for those blizzard-plagued engagements. A rear spoiler, meanwhile, completes the aerodynamic exterior look.

Occasionally confused with its Tahoe cousin, Chevy’s crossover version shares GMC’s lambda platform with Buick's elegant Enclave and Jimmy’s practical Acadia. Ride comfort and smart handling (for a bulky crossover) are but two of the Traverse’s attributes, with the single V6 engine providing plenty of power should a quick getaway from unruly fans become necessary.

Unchanged from last year, Chevy’s brawny mini-ute remains available in three trims, the base LS, lower-midlevel 1LT, upper midlevel 2LT and the flagship LTZ. All trims come with standard front-wheel drive (FWD), but all can be configured with AWD.

Alas, this wily veteran crossover has been panned for its rather low-rent interior in the base trim, but higher trims boast enough amenities to keep the boys comfortable and entertained, even after a home loss. The reasonably quiet cabin might even allow forty winks for some on the way home from those early-morning practices.

As is traditional these days, such interlopers as Mazda’s agile CX-9 and Ford’s can-do Flex keep the Chevy folks on their toes. Ford’s venerable Explorer and Dodge’s surprisingly able Durango also deserve a tire kick or two. Should the season turn out to be better than expected, though, only the 2012 Traverse can haul all those trophies in the style they deserve. 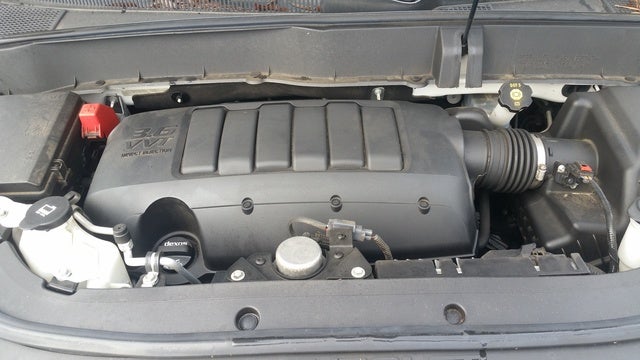 A transmission hill holder is standard in both FWD and AWD trims, with a mechanical limited-slip center differential managing the AWD chores. And to top it all off, when properly equipped with the available trailering equipment, this hefty ute can tow up to 5,200 pounds.

In testing from 0-60 mph, the base V6 scooted to a time of 8.6 seconds, and the LTZ’s hopped up six-banger charged in at 8.2 seconds. While neither time would qualify for Indy, this peppy V6 does the job in town or on the highway, and the majority of reviewers are at least satisfied, if not overwhelmed, with the V6’s fuel efficiency figures. Alas, the same can’t be said of more than a few owners, but efficiency is, apparently, in the eye of the family budget guru.

Though shifting with the 6-speed automatic is smooth and generally responsive, a number of reviews note a tendency to hesitate on the downshift at cruising speed when in full automatic mode. A few other reviewers, finally, hesitate to say that they notice any significant difference in overall performance between the base V6 and the LTZ’s bulked-up version.

Ride comfort, according to most reviews of Chevy’s 2012 Traverse lineup, is surprisingly compliant, doubtless due to the 4-wheel independent suspension. MacPherson front struts are complemented by a multi-link rear end, as well as front and rear stabilizer bars. Harshness, even over the most demanding surfaces, is minimized, while wallow and sway are virtually eliminated. Reviewers note, however, that the more impressive ride qualities are most evident with the standard 17-inch tires on the base LS. The LT siblings, with their standard 18-inch alloy wheels and all-season tires, aren’t bad either, say the majority of reviewers, but the 20-inch tires that roll the LTZ are not only a bit less resilient, but seem significantly noisier, as well.

Though Chevy’s beefy crossover is described by most reviewers as at least competitively nimble, with accurate steering and little body lean in fast corners, there are those who look askance at its challenging size when maneuvering in tight spaces. Others feel no such intimidation and consider this hefty ute agile enough to take on even the most crowded parking garages.

Braking, finally, is described by most reviewers as powerful and true, with no noticeable pedal anomalies.

Traditionally, amenities in the lower trims of such value-minded crossovers as the 2012 Traverse are few and far between. However, standard goodies in the Base LS nevertheless include front and rear air conditioning, premium cloth upholstery, simulated alloy cabin accents and reclining second-row seats. Remote power door locks, power windows and mirrors, steering-wheel-mounted cruise controls and telescoping tilt-wheel steering are standard, as is OnStar Directions & Connections service. Not too shabby for an entry-level trim. But wait, there’s more: An MP3-compatable single-CD player with 6 speakers is complemented by satellite radio and an auxiliary MP3 input.

As for options, lower trims, again in keeping with tradition, are eligible for many items that come standard with the higher trims. The LS can, additionally, be delivered with available trailer-towing equipment and a full-size spare tire.

Optional equipment really starts to pile up for the 1LT and above with stuff like a power sunroof, rear-seat DVD entertainment and second-row captain’s chairs (reducing passenger capacity to 7), all available. Then, too, the 1LT can be driven away with the available All-Star Package with heated front seats, remote engine start, a universal remote garage door opener and 20-inch aluminum wheels.

Reviewers almost universally find the Traverse’s cabin and seats to be roomy and comfortable, though most warn that hard plastic cabin trim is far too prevalent. Undersized buttons for audio and climate-control features, say most reviewers, are more than offset by distinctly legible gauges and logically placed controls. The third-row bench seats are described as adult-friendly, at least for shorter trips, though neither row of seatbacks folds completely flat, thus inhibiting the loading of bulky items into the cargo bay. A handy under-floor storage compartment, however, allows a few extra supplies to be stowed, while bins, pockets and cubbies abound throughout the cabin. Finally, visibility is generally good, according to most reviews, though large rear roof pillars will challenge sightlines to the rear corners.

As a Top Safety Pick for 2012 by the Insurance Institute for Highway Safety (IIHS), Chevy’s hefty crossover gets its highest rating of Good in frontal offset and side-impact testing, as well as in roof strength testing.

The National Highway Traffic Safety Administration (NHTSA), meantime, awards the Traverse its highest 5-star rating for overall safety and for side impact absorption, while front impact and rollover testing garnered a second-best 4 stars.

Though the 2012 Traverse lineup garners generally favorable media opinion for its fuel efficiency, a number of owners don’t see it that way, finding the V6 falling somewhat short of advertised mileage figures. A few owners also complain that standard side steps ought to be included on this high-stepping ute, while others have some slight issues with the rather low-rent cabin ambiance in this somewhat pricy conveyance. Finally, a number of owners find minor flaws with a few of the standard and available techno-gizmos aboard, with most complaints directed at what’s considered a less-than-entertaining standard audio system.

The vast majority of owners, however, are well-satisfied with their new Traverse, favoring its roomy cabin, its vast cargo space, its smooth, quiet ride and its handsome profile. The standard third-row seat is a definite plus in the minds of virtually all owners, while the V6's power and performance are found by most owners to be more than enough for the daily commute and those trips to the building-supply center…or those journeys to the local hockey arena.

What's your take on the 2012 Chevrolet Traverse?

Users ranked 2012 Chevrolet Traverse against other cars which they drove/owned. Each ranking was based on 9 categories. Here is the summary of top rankings.

Have you driven a 2012 Chevrolet Traverse?
Rank This Car

Service charging system light keeps coming on even after replacing two new batteries; what could be the problem?

Car reduces power for no reason, is there a fuse to pull to disable the stabilitrac

221 views with 2 answers (last answer about a year ago)

Why Does My Vehicle Die At Random?

I have a 2012 Chevy traverse that randomly dies when it chooses but I tested the battery, alternator, and starter and all came back good. It gave codes P0107 and P0106. Anyone have similar issues?

Needed a jump 2 times in the last 2 months. Bought a new battery and now I'm noticing the gage is riding lower. I don't want to get stranded again. The 1st time it happened I left the car running f...

181 views with 4 answers (last answer about a year ago)