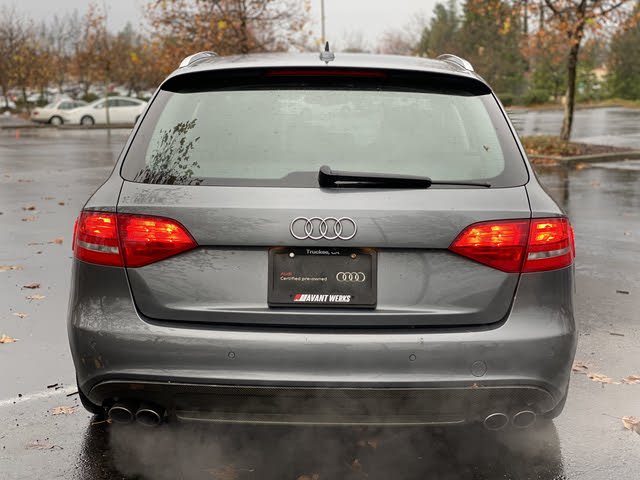 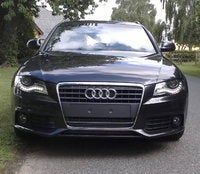 Great gas mileage, a peppy turbocharged four-banger, some surprising agility and a well-wrought interior combine to make Audi’s 2012 A4 Avant a worthy addition to the family.

Tepid cargo room and cabin storage, a few oddly placed controls and instruments and the lack of an available 6-cylinder powerplant may disappoint a few prospective 2012 A4 Avant buyers.

What the 2012 Audi A4 Avant lacks in true posh, it makes up for in panache. In fact, this snazzy family auto shakes out to be the most value-heavy entry-level-luxury wagon in its class, and it handles like a precision German automobile should. Its straight 4-cylinder may be small and a bit unrefined, but it’ll have no problem passing on the highway, not to mention gas pumps by the dozen, and full-time Quattro all-wheel drive traction makes it an easy goer in snow.

Loaded with value and standard features, boasting standard Quattro all-wheel drive (AWD) and going easy on the gas, the 2012 Audi A4 Avant has carved itself a comfy niche in the entry-level luxury automobile market. Like its sedan siblings, this midsize all-purpose wagon comes in three trims, the base 2.0T Quattro Premium, midlevel 2.0T Quattro Premium Plus and the top-shelf 2.0T Quattro Prestige. Seating for 5, a standard turbocharged inline 4-cylinder engine, a shiftable automatic transmission and some nifty moves both in city traffic and on twisty back-country roads are all delivered with the latest Avant lineup. Basically unchanged from 2011, the latest iteration of this spiffy family hauler boasts a few standard items that were optional in ’11 to go with a couple of tweaks to option packages. Allowing only 50.5 cubic feet of cargo space with the rear seats folded, the Avant may be just a tad small for serious hauling tasks and, with its under-endowed console and glovebox, cabin storage is, according to a number of reviews, mediocre, at best.

The A4 Avant wagon is, however, about understated posh, and no matter its dimensions, the ambiance, materials and workmanship embraced by the upscale cabin beats most in its class. Leather abounds, as does alloy cabin trim, while a standard panoramic power sunroof in all three trims gives this classy conveyance a high-end appeal matched only by its handsome profile. It has enough standard techno-gizmos to satisfy all but the most demanding suburban commuter, and options, though pricy, add considerably to its appeal. The Sport Package available for the Premium Plus and Prestige trims, for instance, tacks a sport-tuned suspension to an already nimble platform for added driving pleasure. Audi’s touted Multi-Media Interface (MMI) system, standard for the Prestige and available for the Premium and Premium Plus trims in increasingly configured increments, interacts with audio and Bluetooth-driven communications functions (and navigation in the Premier Plus and Prestige) for seamless listening, phoning and directions, all on a slick dash-mounted LED monitor.

A traditional rival to the Avant is BMW’s plush 328i Sports Wagon, with its extravagant yet refined performance and handling. The Mercedes-Benz R-Class, though technically a crossover, also offers high-end refinement, significantly more cargo area and an available diesel powerplant, and, except for the squared-off rear end, even looks a bit like the Avant. Neither, however, offers the value inherent in Audi’s well-integrated wagon. 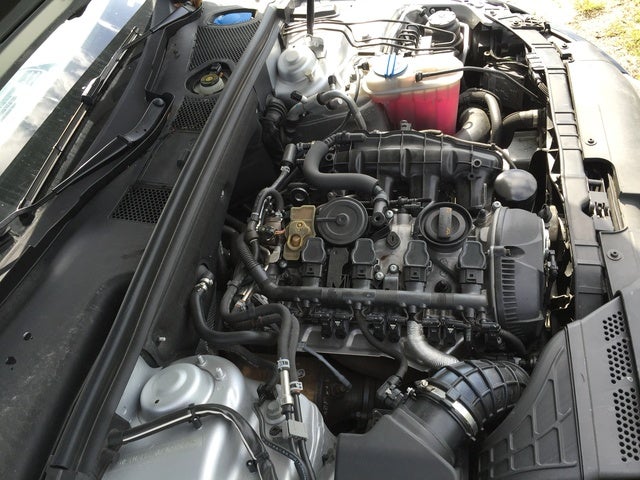 As with the A4 sedan lineup, the 2012 Avant wagon trims all carry an identical direct-injected (DI), variable-valve-timed (VVT) turbocharged 2.0-liter inline 4-cylinder (I4) engine. Mated with the standard Tiptronic 8-speed shiftable automatic transmission, this four-banger puts out 211 hp at 4,300 rpm and 258 lb-ft of torque at 1,500 rpm. That’s good enough to clock in at just over 7 seconds from 0-60 mph. Expect an economical 21 mpg city/29 highway, mileage-wise, with a mechanical limited-slip center differential and front and rear auto-locking differentials doing the heavy lifting in the all-wheel (quattro) drivetrain.

Reviewers laud the turbocharged straight four as the wave of the entry-level luxury-car future, with many claiming the 2012 Avant strikes a fine balance between power and efficiency. The 8-speed shiftable automatic is noted by reviewers to be tolerably smooth, but several reviews do mention an occasional reluctance to downshift with alacrity for passing and merging power. Furthermore, reviewers claim a bit of vibration through the Avant’s steering wheel when it’s at idle that wouldn’t be an issue with the typical 6-cylinder powerplant.

Though not exactly ready for the Baja 500, the A4 Avant offers a heady agility that’s not found in the typical wagon. Complemented by the standard 4-wheel independent suspension, front and rear multi-link suspension systems and stabilizer bars at both front and rear, Audi’s astute wagon boasts pleasantly weighted steering and an uncanny ability to confront back-road monkeyshines and traffic-mandated maneuverings with equal aplomb. Though a few reviewers mention the A4 Avant’s tendency to be a bit heavy in the front end, this in no way detracts from its otherwise impressive nimbleness. Should a bit more élan be required, both the Premium Plus and Prestige trims can be delivered with the available Sport Package offering a sport-tuned suspension, as well as sport seats and a sport steering wheel mounting paddle shifters. The Prestige is additionally eligible for the S Line Package, also with the sport-tuned suspension, sport seats and sport steering wheel, as well as 19-inch alloy wheels and a variety of exterior and interior upgrades.

Ride comfort, meantime, is described as better than average by reviewers, especially with the Premium trim’s standard 17-inch alloy wheels. The 18-inch alloy wheels gracing the Premium Plus and Prestige are noted in most reviews to ride a bit stiffer, but not to any worrisome extent. Put the Sport or S Line packages on either of the higher-end trims, and the ride, of course, gets significantly harsher.

The Prestige is additionally eligible for the Audi Drive Select Package with driver-selectable Comfort, Auto, Dynamic or Individual settings for suspension, steering, throttle and transmission response. Many reviewers find the Drive Select option to be a pricy add-on with no appreciable value, with one review claiming the standard suspension/steering system is admirably suitable in nearly all driving conditions and situations. 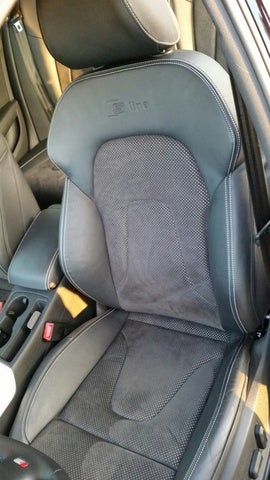 To all this, the 2.0T Premium Plus adds standard tri-zone climate control, heated front seats, a power liftgate, an auto-dimming rear-view mirror, driver memory settings, a universal remote garage door opener and Bluetooth communications technology. Meantime, options available to this midlevel trim include the Sport Package, as well as the MMI audio, navigation and communication interface, rear parking sensors and a rear-view camera all displayed via an LED dash-mounted monitor. Remote keyless entry and ignition, along with a premium Bang & Olufsen premium audio system with 14 speakers and 505 watts of power are also available to the Premium Plus as standalone options.

The flagship 2012 Avant 2.0T Prestige adds S Line cabin accents, keyless entry and ignition, rear parking sensors and the MMI interface and display to its list of standard features. The Audi Drive Select Package, meanwhile, as well as radar-controlled adaptive cruise control, are each trim-exclusive options available only to the top-shelf Prestige.

Reviewers claim some misplaced controls, a somewhat cramped rear seat, less than ideal cabin storage and a few ill-conceived plastic surfaces don’t fit the otherwise well-wrought and comfortable cabin. Seats, however, are described in most reviews as supportive and comfy for the long haul, with interior workmanship and materials generally conceded to be among the class leaders. Finally, gauges are clear and well-lit, and the sheer number and quality of standard features aboard the A4 Avant, no matter the trim, draws praise from nearly all reviewers, despite general agreement that a few controls could be better positioned.

The National Highway Transportation Safety Administration (NHTSA) gives the 2012 A4 Avant 4 stars overall, its second highest rating, with 4 stars in frontal impact testing, its highest rating of 5 stars in side-impacts tests and 4 stars again for rollover safety. The Insurance Institute for Highway Safety (IIHS), meantime, awards the 2011/2012 Avant a Top Safety Pick nod, with its best score of Good in front and side impact testing, as well as in roof strength tests.

Sometimes tepid acceleration out of the 8-speed automatic is mitigated a bit by the turbocharged I4’s stellar gas mileage, according to owners of the 2011 and 2012 A4 Avant wagon. Also, the cramped rear seats and seemingly helter-skelter instrument and control placement disappoint more than a few owners. There is a bit of grumbling about build quality as well, especially the fact that the I4 burns what many claim to be an excessive amount of oil. Most owners also shudder at the high cost of options for this wagon, while others remain disappointed in its meager cargo capacity.

On the positive side, however, owners brag unceasingly about the Avant’s good looks, merging and passing power (despite the lazy 8-speed automatic) and high-end cabin. A satisfying abundance of standard features as well as top-ranked safety scores impress a number of owners, while others remain enthralled with the balance of ride comfort and agility in this far-from-staid family wagon.

Has anyone had experience of car electronic system shutting down when driving? It’s a new battery but the system said it wasn’t charging and started to shut everything down while driving at 70mph....

WHERE DO I EDIT THE PRICE OF MY LISTING?

Why Can't I Review Langan Audi East When I Dealt With Them Recently?