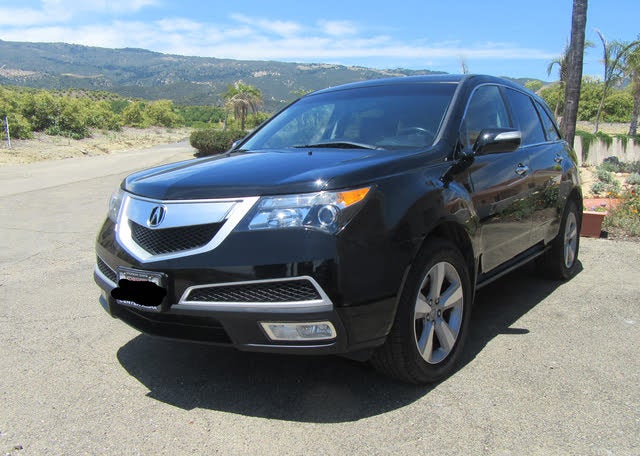 The 2012 Acura MDX features luxurious cabin appointments, especially with the Technology and Advanced packages, as well as smooth handling and ample cargo room.

No changes from the previous model year mark the 2012 Acura MDX, and it has poor gas mileage compared to similar-size SUVs.

Focusing its efforts on both sport and utility, Acura delivers tried-and-true styling and performance in its 2012 MDX. Safety remains a key component, with numerous features designed to prevent and protect in collisions, while luxurious appointments throughout the cabin and reliable handling components make the MDX a top pick in the luxury SUV category.

For drivers who want handling, luxury and room in one package, they can find it with the 2012 Acura MDX. For 2012, the MDX, which has no changes from the 2011 version (the last major redesign was for the 2007 model year), is available in five trims: Base, Advance, Advance with Entertainment, Technology and Technology with Entertainment. The Base trim comes with dual-level heated front-row seats, a premium audio system with 8 speakers and an 8-inch subwoofer, power moonroof, air conditioning, AM/FM radio, 6-CD changer, XM radio, steering-wheel-mounted audio controls, Bluetooth HandsFreeLink interface, MP3 decoder, rear-view mirror with rear-view camera display, remote-linked power-operated tailgate and 18-inch aluminum-alloy wheels. The Technology trim has a 10-speaker surround-sound speaker system (with wireless headphones for rear-seat passengers), voice-recognition navigation system with real-time traffic updates and a solar-sensing automatic climate control system, and a multi-view rear camera. Upgrades standard to the Advance trim over the Base include heated and ventilated front seats, an active damper system sport suspension, blind spot information system, adaptive cruise control and 19-inch, 7-spoke alloy wheels. Two options available only as part of the Entertainment trim are a rear DVD entertainment system (with a 9-inch motorized VGA screen) and dual-level heated second-row outboard seats. 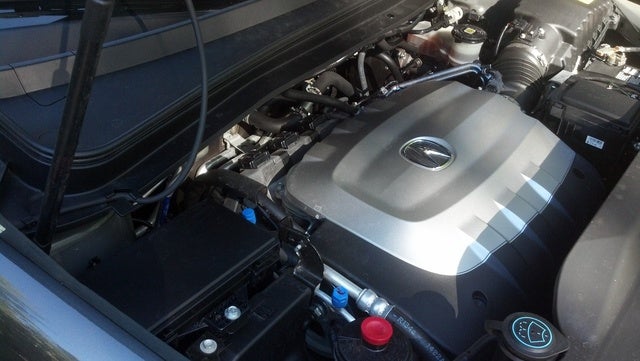 The 2012 Acura MDX comes standard with a 3.7-liter, 24-valve SOHC VTEC V-6 engine that produces 300 hp and 270 lb-ft of torque. The 21-gallon gas tank, for which premium unleaded gas is recommended, allows drivers to attain 16 mpg city/21 highway. Available only with Acura’s Super Handling all-wheel drive (SH-AWD) 6-speed automatic transmission, the MDX also comes standard with a limited-slip differential, sequential sport shift and variable valve control. An optional block heater is available for all trims. For those looking to add a trailer, the MDX has a towing capacity of up to 5,000 pounds.

Although geared for luxury, the MDX's V6 engine provides quick throttle response and high-rpm power, as well as noticeable low- and mid-range torque. The sequential sport shift transmission can be operated in two automatic shift modes or manually through the use of steering-wheel-mounted SportShift paddle shifters. This allows the driver to access the Sport mode, which allows the engine to rev higher for quicker acceleration, and the Grade Logic Control, which holds lower gears longer for smoother performance on hilly terrain.

The SH-AWD distributes the optimum amount of power between the front and rear axles and the right- and left-hand wheels, allowing for pinpoint control and virtually no understeer during turns or on windy roads. This is aided by the 4-wheel all-independent suspension, which allows all four wheels to maintain firm ground contact when cornering, accelerating and braking. The SH-AWD achieves high marks for its ability to handle all on-road and off-road driving conditions, whether ice, snow, rain or dirt, with the assistance of the electronic stability system with traction control.

Speaking of off-road capabilities, the MDX has a minimum ground clearance of 5.6 inches (up to a max of 8.2 inches), with an approach angle of 22.2 degrees and a departure angle of 23.8 degrees, making it completely capable in many off-road situations.

Luxury and comfort are the key phrases surrounding the interior of the 2012 Acura MDX. Although all models come standard with leather seating, those opting for one of the Tech trims will be pleased by the Milano premium leather appointments inside the cabin. Seats, trim, shift knob and steering wheel come fully enrobed in the supple leather, held together with Lancia-style stitching. Both the second- and third-row seats fold down, allowing for a copious amount of cargo space (83.5 cubic feet behind the front-row seats; 15 cubic feet behind the third-row seats).

The ability to seat 7 comfortably is a huge selling point of the MDX. Along those lines, the driver, front passenger and rear passengers have the ability to adjust the climate in their specific seating area using the tri-zone climate control system. The power-adjustable driver’s seat has 10 different positions to choose from, with memory for two drivers' positions, while the passenger seat is 8-way adjustable. Advanced trims have heated seats available for both the front and middle row, as well as ventilated front seats.

Standard safety features for the 2012 Acura MDX include driver's and front passenger side-impact airbags, side curtain airbags (with a rollover sensor) for all three rows of seats, active front-row head restraints, two-stage driver and front passenger knee bolsters, all-disc antilock braking system (with electronic brakeforce distribution and brake assist), daytime running lights and a tire pressure monitor. You can also add an optional blind-spot warning system and active cruise control with a collision mitigation feature. Although 2012 figures are not yet available, the 2011 Acura MDX was given a 5-star overall rating by the National Highway Traffic Safety Administration, including 5-star ratings for frontal barrier crash, overall side crash, side pole rating, combined side rating front seat and combined side rating rear seat. With no design changes for 2012, it’s a good assumption that the 2012 version will be rated just as highly.

A common theme from owners of the 2012 Acura MDX is how well the vehicle drives, riding more like a car than most other comparable SUVs. Overall, owners and potential owners have been impressed with the comfort and driving ease you get with the 2012 Acura MDX, as well as its safety appointments, available cargo space and reliability.

bigdenny We love our 2012 Tech MDX, except for inadequate warmth produced by the passenger seat heater, in the high setting. Also long periods of interrupted heat, up to hours. Acura rep says heat is interrupted to conserve on fuel consumption. Dennis Janocik

Art A nice car do not dismiss it because it has a few years behind it. It still can the job most impressively.

Snowfire36 When we started looking for a used car our mechanic said - Acura MDX, they run forever. He knew we maintained our cars. So we went with a 2012 Acura MDX. For the first couple years - it was great. Then we started have oil consumption issues. The first time - after a trip - and the car was into to Acura right before the trip to make sure we were all good to travel - we got home and without warning all the lights on the dash lite up. NO WARNING!!!!! We had to add over 4 quarts of oil. Acura said it's acceptable to add a quart of oil per 1,000 miles. WHAT? We have owned cars forever and never had to deal with it. After not getting anywhere with the local dealership. We contacted Honda. Out of the blue right after the car hit 100,000 miles. We get a call from the local dealer that they have our parts. ???? What parts??? Honda had sent parts to rebuilt the pistons as well as change the timing belt and water pump. The local dealer decided they were just rebuilding the pistons. We went ahead and had the water pump and timing belt changed. We were thinking WOO HOO we are thinking we are good! No more worries. Three months later driving to in below freezing weather we suffered a major piston failure! What is that like? The engine blowing up. At first the Acura dealer told us we were getting a new engine, then that changed to a used one and they can't guarantee we won't have oil consumption issues, Acura can't tell which engines this is affecting AND we a soft warranty for a year. Then just last week we receive a notice that Acura is kind of dealing with the issues. They are extending the warranty - which - are you ready for a laugh covers the issue til the same time the soft warranty ends. So we have til November 2019 to get rid of this car. :(

Users ranked 2012 Acura MDX against other cars which they drove/owned. Each ranking was based on 9 categories. Here is the summary of top rankings.

Have you driven a 2012 Acura MDX?
Rank This Car

Hello, I have 2012 mdx. While keeping key in on position ( not starting the car) oil and bettery lights stays on and don't turn off. Any suggestions..

I got an acura that got its front bumper scratched pretty bad. The right corner doesn't connect with the car light anymore and is sticking out/down a little, there's a tiny rip on the bumper as well...

I got an acura that got its front bumper scratched pretty bad. The right corner doesn't connect with the car light anymore and is sticking out/down a little, there's a tiny rip on the bumper as well...

Why Is My Vehicle Shown As Overpriced When My Carfax Report Shows My Vehicl...

My Carfax says my 2012 Acura MDX in the condition my car is in with the low mileage the vehicle has with a value of $16,260, yet Cargurus shows my car as way overpriced in my listing. What is up wit...

SH-AWD with Technology and RES