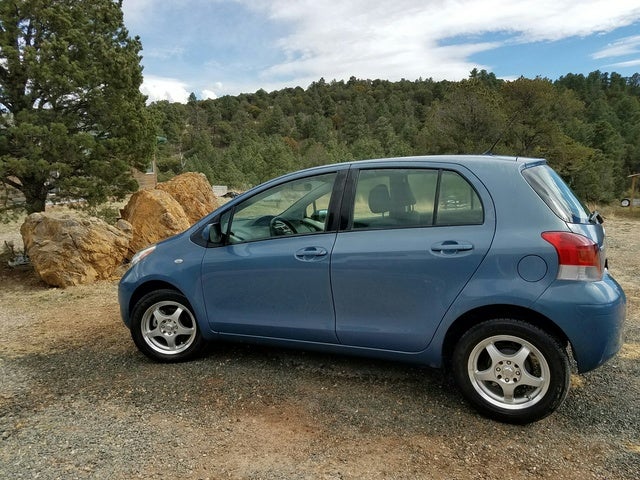 The 2011 Toyota Yaris’s most attractive features include its excellent fuel economy, extensive list of standard safety features for a subcompact and a budget-friendly starting price.

While road and engine noise increase with the speed of the 2011 Yaris, so, too, does the subcompact’s price when options packages are added to offset its decided lack of standard interior features.

The 2011 Toyota Yaris offers a comfortable and affordable commuter car with impressive fuel economy numbers and standard safety features. However, when pushed to highway speeds, the small engine feels the strain, particularly when outfitted with the optional automatic transmission. Although Toyota keeps the price low with few standard features inside, adding options packages may raise the price high enough for the Yaris to get lost among competitors with more pep, more standard features and more cargo room.

Toyota went high-concept in naming the Yaris, its smallest and least expensive car. The manufacturer explains that the subcompact was named for the Greek goddess Charis, symbolizing beauty and elegance, combined with the city of Paris, a center of culture, and the German affirmative “ya.” Beauty and elegance may not be what leaps to mind with the sedan’s traditional, conservative exterior shape, but Toyota describes the 3- and 5-door hatchbacks as having a “strong, modern mono-form shape,” one designed by Toyota’s European design studio ED2 and the Toyota Motor Corporation (TMC) design division. Those who do say “ya” to the 2011 Toyota Yaris will be buyers searching for an affordable subcompact best suited for commuting and around-town trips.

2011 has brought only minimal changes to the Yaris, including brake override technology as a standard safety feature. The hatchbacks now provide sun-visor extensions, and some color offerings have changed for both body styles. The subcompact again comes in three trims: a three-door hatchback (or liftback, as Toyota calls it), a five-door hatchback, and a more traditionally styled sedan.

The Yaris comes with few standard features, and many desirable options must be added as part of a package that can increase an otherwise affordable base price. For example, the Yaris is one of few vehicles that does not come with a standard audio system, and the Convenience Package is required if buyers want an AM/FM CD player with MP3/WMA playback, an auxiliary audio jack, XM compatibility and CD text display. The Convenience Package also upgrades the tires from standard 14-inch steel wheels to 15-inch steel and allows the rear seatback to fold in a 60/40 split to increase the rear cargo space. When added to a hatchback, the Convenience Package includes a rear window wiper, as well as rear seats that now slide and recline to alleviate some of the cramped feeling in the back. The Power Package provides all of the features of the Convenience package, and also supplies the Yaris with power locks, windows and side mirrors and remote keyless entry. The Sport Package changes the exterior appearance with color-keyed front and rear underbody spoilers, side rocker panels and a rear spoiler, as well as integrated foglamps. Front seats are covered with sport fabric, and the steering wheel and shift knob are leather covered. The audio system now includes an iPod interface and auto sound leveling, and the dashboard displays use Optitron instrumentation. Certain features can be added as standalone options when the Sport or Power package has been purchased, including upgraded wheels (15-inch alloy), cruise control and, for the Power Package, integrated foglamps.

Despite its variety of body styles, the 2011 Yaris runs on only one engine: a 1.5-liter DOHC 4-cylinder with VVT-i. The front-wheel-drive subcompact delivers 106 hp at 6,000 rpm and 103 lb-ft of torque at 4,200 rpm. The Yaris uses a standard 5-speed manual transmission, but a 4-speed automatic is an available option. One of the Yaris’s strongest features is its fuel economy, with estimates of 29 mpg city/36 highway with the manual transmission and 29/35 for the automatic.

Let’s be honest: Consumers considering the smallest and cheapest Toyota aren’t in it for a high-performance vehicle. The standard 5-speed manual transmission delivers a more spirited ride than the automatic, but the engine, while quiet enough around town, gets louder when asked to deliver more. Highway speeds also produce increased road noise. The engine’s power is also somewhat debatable, with one road test of the Yaris sedan with automatic transmission producing a 0-60 mph time of 9.8 seconds (faster than competitors Honda Fit or Hyundai Accent), while other tests resulted in much slower times—as much as 10.7 seconds—leaving the Yaris behind the Fit, Ford Fiesta and Nissan Versa. In general, the power is adequate for a commuter car, but the Yaris falls flat when challenged with hilly terrain or a demand for quick acceleration when passing on a highway.

The electric power-assist rack-and-pinion steering is frequently described as light and responsive, and the handling is a dream for squeezing the subcompact into those tight parking spaces. However, the relatively light weight of the car demands extra attention in high winds, which can cause the Yaris to drift. The suspension for 2011 is a front independent MacPherson strut with a stabilizer bar, while the rear uses a torsion beam suspension. Most find the ride comfortable and note that the Yaris can handle most bumps and uneven road conditions as well as (if not better than) its rivals, although bigger bumps and dips are felt more keenly.

While the interior of the 2011 Yaris is not quite Spartan, it is one of the few vehicles requiring consumers to pay extra for a basic stereo system. And this is one of the major drawbacks of the Yaris. What appears to be a budget-conscious sticker price quickly loses its wallet-friendly appeal when most features must be added through one of the available options packages.

Standard features are few in the subcompact and are limited to items including air conditioning, a tilt (but no telescoping) steering wheel and new, extendable sun visors for the hatchback. The hatchbacks offer 4-way-adjustable fabric front seats, while the sedan’s driver’s seat provides 6-way adjustment, including a height adjustment not found in the hatchback. The front seats are generally considered comfortable. The Yaris’ rear seat is designed to seat three, but lives up to the stereotype of a subcompact and would be cramped for more than a short jaunt. The Convenience Package, however, adds a reclining and sliding feature to the hatchback’s rear seats, which helps to alleviate the squish factor to a degree. In general, the interior (particularly in the front) is deemed to be fairly comfortable, with head- and legroom that seems surprisingly roomy for the class. Interior materials are, as expected given the price, made from cheap and hollow plastic, yet reviews note that the interior does not appear to be cheap or flimsy even for a budget car.

What seems to perplex reviewers most, however, is the odd layout of the dashboard. The instruments are centered on the dash above the center stack, rather than in front of the driver. This requires the driver to look to the right in order to read any of the gauges, including the speedometer. Their visibility is further impacted by the fact that the faces of the gauges are not tilted toward the driver. The placement of the gauges, combined with the hatchback’s lack of height adjustment for the driver’s seat and unavailability of a telescoping steering wheel, leads some to complain about an uncomfortable and ungainly driving position.

Cargo space in the Yaris is minimal, with hatchbacks offering a standard 9.32 cubic feet and the sedan providing 12.9 cubic feet. Rear seatbacks fold in a 60/40 split only with the purchase of the Convenience Package. While this adds to the cost, it also increases the hatchback’s space to 25.7 cubic feet and the sedan's to 13.7 cubic feet. Some have noted, however, that the sedan’s trunk opening is too narrow for large items, and the hinges impinge on the actual storage space.

Safety is one of the winning attributes for the 2011 Toyota Yaris. In fact, although the rest of the vehicle does not offer much in the way of standard features, standard safety features abound. The Yaris comes equipped with the Toyota Star Safety System, which includes standard Vehicle Stability Control, Traction Control, antilock brakes (disc brakes in the front and drum brakes in the rear) with electronic brakeforce distribution and brake assist. Additionally, standard dual-stage airbags protect the driver and front passenger, inflating to different degrees based on the severity of the collision. Front-passenger weight is also monitored to determine whether to deploy the airbag, and at what inflation power. There are also standard front-row, seat-mounted side airbags as well as side curtain airbags for the front and rear seats. The Yaris has also been outfitted with Toyota’s Smart Stop Technology, which will reduce the engine’s power and stop the vehicle in case the brake and gas pedals are simultaneously applied.

The Insurance Institute for Highway Safety rated the 2011 Toyota Yaris Good (its highest rating) for front and side crashes. However, it rated the Yaris only Acceptable (second highest rating) for rollovers and Marginal (second-lowest rating) for rear collisions. The National Highway Transportation Safety Administration has not tested the Yaris hatchback or sedan using new 2011 standards. Its 2010 ratings, however, awarded the sedan four (out of five) stars for front and side crashes, as well as the rollover test (which showed a 13% chance of a rollover). The 5-door hatchback scored identically (although with a 14% chance of rollover), while the 3-door had a perfect score for the driver’s side in a front or side crash, while the passenger side earned only four stars in a front crash and three stars for a side crash. The rollover test again earned four stars.

Owners of the 2011 (and almost identical 2010) Toyota Yaris seem to buy the economy car primarily for commuting. Although owners fairly consistently like the Yaris’s price and fuel economy, other factors receive mixed reviews. Some owners are surprisingly pleased at the amount of pep they find in the small engine, but do comment on engine and road noise at higher speeds. Others comment that highway speeds and wind are not kind to the otherwise easy handling of the lightweight car. The centered instrument gauges appear to be as disconcerting to owners as they are to the experts, and most would prefer them in their traditional location in front of the driver for easier visibility. While some owners feel that the ride is surprisingly solid and the interior feels surprisingly high quality, others comment on the uncomfortable seats and cheap feel of the plastic. Overall, however, owners seem to be content with their purchase of a basic, economy car and are even surprised by the feel of the interior and agility of the handling.

Users ranked 2011 Toyota Yaris against other cars which they drove/owned. Each ranking was based on 9 categories. Here is the summary of top rankings.

Have you driven a 2011 Toyota Yaris?
Rank This Car

Ac Cools On And Off And Doesnt Workt Properly

NO POWER STEERING,RADIO,AIR CONDITIONING,BLINKERS,WINDOWS,... CANT GET IT OUT OF PARK WITHOUT PRESSING THE SHIFTER RELEASE WIPERS,ALL LIGHTS ON ON DASHBOARD,REAR VIEW MIRRORS....NONE OF IT WORKS.....

2011 Toyota Yaris 4dr sedan automatic trans will turn over fine and all dash lights normal but will not start. It had some collision damage to passenger side but was not severe. Replaced ignition ...

Can I Rank A Dealership That I Had A Horrible Experience With?

I had a horrible experience with one particular dealership regarding a vehicle that I was selling to them. Can I rank them, or give them a review in order to warn other potential auto buyers of thi...

So I went for a drive on my lunch break. a work truck ran over a 12 inch to 24inch peice of hard plastic. Scrathed my front bumper and dinged my hood. He pulled over, I got his info... What do I do n...