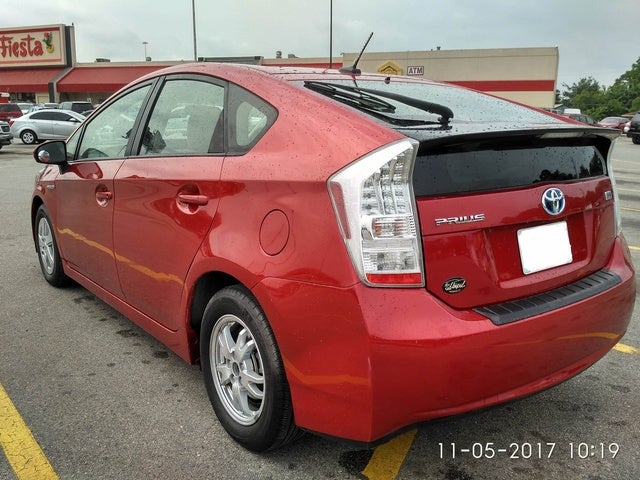 The 2011 Toyota Prius blends everyday convenience with excellent fuel economy and a tangible commitment to sustainability.

Despite significant revisions last year, the 2011 Prius is still slower, heavier and more expensive than a comparable gasoline-only compact car.

Toyota's 2011 Prius continues to represent the leading edge of the nascent hybrid automobile market. In a segment where the appearance of being “green” is almost as important as things like passenger comfort and performance, the 2011 Prius' unique shape and eco-friendly details have garnered praise and resulted in big sales numbers. As a daily driver, the 2011 Prius is adequate for most; as a lifestyle statement it's highly desirable for many, even in the face of increasing competition.

Having cemented its place in the market, Toyota's popular Prius hybrid sees only minor detail changes for 2011. As the best-selling hybrid in America, the Prius has been a home run for Toyota, especially given the skepticism that surrounded the model's launch way back in 1997.

While a no-frills gas compact (like Toyota's own Corolla) returns nearly the same fuel mileage with careful driving, no “regular” car can provide the sense of participation in saving the planet that the 2011 Prius can. Nor can any traditional compact wow even the most jaded techie with its suite of electronic wizardry.

That the Prius is dynamically inferior in many ways to more mainstream cars certainly hasn't hurt its standing in the sales column. Still, buyers should consider the increased cost and reduced performance of a hybrid before buying one. But if making a statement about how you feel about the environment is among your vehicular priorities, then the 2011 Prius should be at the top of your list. 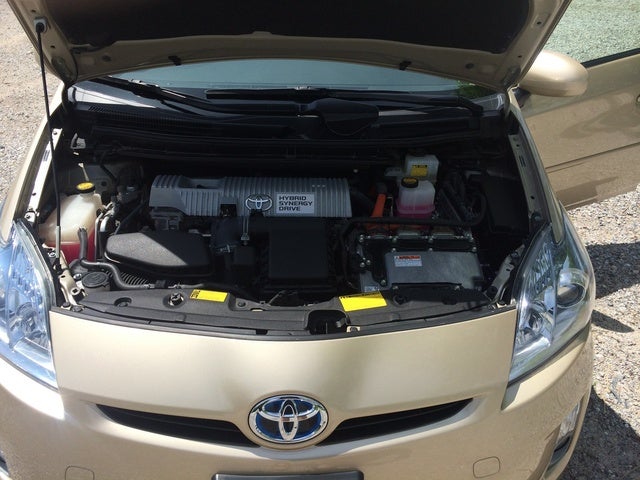 The 2011 Prius features perhaps the most sophisticated drivetrain ever installed in a production automobile. Even a high-dollar German import looks like a dinosaur when compared to the Prius and its Hybrid Synergy Drive system. Employing an efficiency-optimized gas engine and a high-torque electric motor-generator, the Prius can operate in a variety of modes to deliver the best fuel mileage. The next dimension of hybrid motoring comes next year, when the highly anticipated plug-in Prius debuts, just in time to do battle with Chevrolet's new Volt.

The gasoline component of the 2011 Prius' drivetrain is a 1.8-liter inline 4-cylinder engine that makes 98 hp and 105 lb-ft of torque. This all-aluminum motor runs on the Atkinson cycle, which holds the intake valves open a bit longer than normal to increase efficiency. Toyota fits the Prius with electrically operated power steering, cooling and air conditioning, resulting in the first engine without an accessory drive belt. The complex electric motor-generator is then integrated with the gas engine via a CVT automatic transmission that instantly varies the drive ratio to achieve optimum economy. Either the gas engine, the electric motor or a combination of both can power the Prius' front wheels in normal driving. The EPA estimates that the Prius will return an impressive 50 mpg in mixed driving.

With its focus on economy, it shouldn't surprise buyers that the 2011 Prius' ride and handling are far from sporty. The electric power steering lacks natural heft and feedback, and the small, low-rolling-resistance tires don't grip very well at the limit. Though the 2011 Prius is certainly pleasant to drive, serving up a smooth highway ride and easy handling around town, it actively discourages spirited driving.

First-time hybrid buyers will need a few miles to acclimate themselves to the Prius' unique operating characteristics. The gas engine is constantly shutting down, then seamlessly re-starting as needed to save on fuel. The regenerative brakes, which recover friction energy and use it to recharge the battery pack, can feel grabby and artificial at first. Yet these quirks are part of the Prius ownership experience; rather than making them transparent, Toyota embraces the things that set its hybrid apart from traditional cars.

With its five-door hatchback body style, the 2011 Prius delivers a healthy dose of passenger and cargo versatility. Toyota engineers have packaged the battery pack and electrical hardware in a way that minimally affects cabin volume. The low load floor and large hatch make the Prius an excellent urban errand runner, while its spacious and comfortable front and rear seats make long highway trips a breeze.

The interior and dash design are futuristic and feature decent ergonomics, though taller drivers might take issue with the steering wheel's lack of adjustment. The upholstery is woven from a sustainable cloth, and the interior plastics are made from renewable materials, rather than petroleum distillates.

Mindful of its popularity among families, Toyota has filled the 2011 Prius with safety features. Six airbags are standard, as are active head restraints, antilock brakes and stability control. Options include a pre-collision system, a lane-keeping assist program and even active parking guidance. In NHTSA crash-testing the Prius earned four stars for frontal impact protection.

Prius owners are a passionate lot. Unsurprisingly, buyers are thrilled with the exceptional fuel economy that the Prius achieves. Owners also report being impressed with the amount of gear that they can fit under the hybrid's hatchback. Drawbacks include compromised rearward visibility, poor acceleration and a driving position that's unfriendly to taller drivers.

Users ranked 2011 Toyota Prius against other cars which they drove/owned. Each ranking was based on 9 categories. Here is the summary of top rankings.

Have you driven a 2011 Toyota Prius?
Rank This Car

Is The 2011 Toyata Prius A Good Model

What Does The Check Hybrid System Light Indicate

My 2011 Prius with 320,000 miles has been sitting more due to COVID-19. Went to move it and the Check Hybrid System alert was on. The check engine light came on as well along with the brake system...

Hi There. Prius 2011, about 103k miles, maintenance up to date, fairly new 12v battery. Lost power while driving, the Check Hybrid System heading came up on the dashboard. Made it to a shoulder saf...

Why Could My 2011 Toyota Prius Be Smelling Like Coolant

Burning of coolant from my 2011 prius