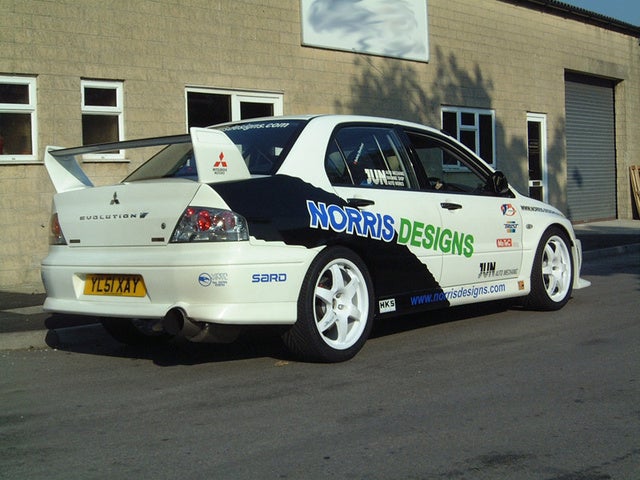 A stiff ride, low-rent cabin materials, and the lack of a driver-friendly telescoping steering wheel may subvert the 2011 Lancer Evo's sporty sedan appeal in the minds of some tire-kickers.

For sheer driving pleasure, whether on twisty back roads, long straightaways, or snow-covered highways, the 2011 Lancer Evolution has what it takes. Be advised, however that this nimble sedan isn't really designed for the daily commute. And be prepared to pay a hefty price for this nimble sedan, both at the dealership and at the gas pump.

Have a need for speed? Enjoy twirling through quirky mountain roads at insane speeds? The 2011 Mitsubishi Lancer Evolution sedan might be just the ticket for either pursuit. This five-passenger screamer, often known as simply the “Evo,” takes the common Lancer platform, loads in a turbocharged inline four-cylinder (I4) powerplant, standard all-wheel drive (AWD), and a sport-tuned suspension to come out kickin’ butt on the track, on the switchbacks, and on the highway – even in snow. And this sporty screamer looks good doing it. Of course, the Evo’s power and prowess don’t come cheap, nor is it particularly fuel efficient, thus practicality is not a strong suit. Commuters, for example, might find the handling-oriented suspension a bit stiff, while non-folding rear seats and inconveniently placed AWD components limit vacation-minded families to a mere 7 cubic feet of trunk space.

In any case, Mitsubishi has whittled this compact sports sedan down to two trim levels for 2011, the base GSR (Grand Sports Rally), and the marginally more posh – and more expensive – Evolution MR. Both are equipped with standard AWD that features settings for pavement, gravel, and snow. Appearance-wise, the major difference between the two is the GSR’s standard wing-type rear spoiler, with the MR mounting a more staid lip spoiler. As for mechanical differences, the GSR trim gets a 5-speed manual transmission, while the MR mounts the standard dual-clutch 6-speed automatic manual transmission for the engagement of a stick shift and the convenience of an automatic. Except for the addition of Mitsubishi’s new FUSE hands-free link system and real-time traffic updates, both 2011 Evo trims stand pat from 2010.

In the hotly contested sports sedan market, Subaru’s impressive Impreza WRX STI comes closest to matching the Evo in price and performance, with a plusher interior to boot. Other rivals include the V8-equipped Ford Mustang and Chevy Camaro, as well as Nissan’s 370Z and Audi’s A5. All are decent enough sports cars, thus choice pretty much comes down to brand loyalty, not to mention the best deal.

Both 2011 Lancer Evolution trims pack a 2.0-liter turbocharged inline four-cylinder (I4) powerplant that puts out 291 hp at 6,500 rpm and 300 lb-ft of torque at 4,000 rpm. The difference in the trim levels, however, lies in the transmission, with the GSR packing a 5-speed manual transmission and the MR equipped with a 6-speed dual-clutch automated manual transmission that Mitsubishi coyly labels Super All-Wheel Control (S-AWC). Mileage is estimated at 17/13 mpg in the GSR and 17/22 in the MR. Standard AWD in both trims is managed by a mechanical, limited-slip center differential, as well as front and rear limited-slip differential. Additionally, the Evo’s AWD system features three driver-selectable modes for pavement, gravel, and snow.

Reviewers find the turbocharged four-banger almost scary fast, with a 0-60 time of less than 5 seconds the norm. The GSR’s manual transmission is considered by most reviewers as smooth enough on the open road, but a bit of a chore to operate in traffic. The MR’s automated manual transmission, on the other hand, is the subject of some difference of opinion among reviewers, with some lauding its advantages during the daily commute and others finding it a bit clunky around town, though silky-smooth on the highway and the track. An uncouth amount of engine racket, however, is noted by nearly all reviewers, said raucousness claimed by many to decrease only marginally at cruising speeds.

If there’s one thing that virtually all reviewers of the 2011 Lancer Evolution agree on, it’s the fact that this is one incredibly agile machine. With the selectable AWD modes, well-balanced steering mechanics, and standard performance tires, this sporty sedan tops many of the most expensive Euro-roadsters in sheer confidence, exhilaration, and fun on wild and twisty roads. Equip the Evolution with snow tires, and even winter’s worst is no match for this nimble sports sedan.

Basics in both trims include a four-wheel independent suspension with modified MacPherson front struts, front and rear stabilizer bar, and a multi-link rear suspension. The MR, moreover, sports Bilstein shocks that soften the ride just a touch. Both the GSR and MR trims are delivered with 18-inch alloy wheels mounting standard performance tires that reviewers claim provide a downright tenacious grip on the tarmac. The standard Brembo brakes are noted by reviewers as among the best in the industry in providing more than enough stopping power in all situations.

Unfortunately, there’s a price to pay for all this handling audacity, with ride quality described by more than a few reviewers as downright harsh. All bumps are felt, if not exacerbated, through the sport-tuned suspension system, and the low-profile performance tires help the situation not at all. The Evo is designed for speed and agility, not especially for the drudgery of the daily commute, especially over battered highways.

Yes, the 2011 Lancer Evolution is a screamer, and yes, it’s agile and road-friendly, but this heady sedan also comes with more than its fair share of creature comforts. For example, the GSR boasts standard cloth upholstery, Recaro racing front seats, tilt-wheel steering, remote power locks, power windows, and power outside mirrors. Further amenities include climate control, steering-wheel-mounted cruise and audio controls, and a leather trimmed steering wheel and shifter knob. Entertainment is provided by a 140-watt, MP3-capable single-CD player with six speakers, as well as a USB connection for added audio capabilities. Additionally, this base trim sports Mitsubishi’s own FUSE-supported hands-free audio and navigation adjustments and a Bluetooth wireless phone data link. The MR trim level, as befits its elevated status (and price), throws upgraded wheels, an integrated rear spoiler, and steering-wheel-mounted magnesium paddle shifters into the mix.

Options for both trims include a power glass sunroof, push-button start, upgraded cabin and dash trim, and a hard-disc-drive touch-screen navigation system, depending on selected packages. A Rockford Fosgate premium 6-CD changer pounding out 710 watts over nine speakers, including a 10-inch subwoofer along with Sirius satellite radio, is available for both trims, and aluminum/leather accents for the brake handle and shifter knob come with the Interior Sport Package, also available in both the GSR and the MR. The MR, meantime, can be delivered with heated front seats and heated outside mirrors with its trim-specific Touring Package.

Although reviewers concede that the Evo packs more than its share of standard cabin amenities, many note that overall ambiance is somewhat lacking. Interior materials are considered by reviewers to be a little too plebian, a bit too regular-Lancer-like for this sports sedan’s elevated price range; mention is even made of doors that clank rather than shutting with a solid thud. Adding the available leather and aluminum trim accents gives a nod toward plush, however, and gauges are large and easily readable. Additionally, most reviewers consider the electronic information display to be quite legible, even in bright sunlight. The semi-bucket front racing seats standard in both Evo trims are designed for sporty driving and can get a tad uncomfortable over long stretches of highway cruising.

The National Highway Traffic Safety Administration (NHTSA) gives the 2010 Lancer five stars in front and side impact tests on the driver’s side, and four stars for front and side impact testing on the passenger side. Rollover testing yields a solid four stars, but keep in mind that NHTSA testing methods and data have become more stringent for 2011. The Insurance Institute for Highway Safety (IIHS) gives the 2011 Lancer (and by extension, the Evolution) trim lineup its best rating of Good in all tests, including roof strength.

Though the majority of owners are pretty much blown away with the 2011 Lancer Evolution’s handling and power, many note that its gas mileage could be better, with some lamenting the lack of a 6-speed manual transmission. Additional owner gripes include poor rearward visibility and the bland interior that goes for a premium price.

On the positive side, owners compliment the Evo’s exterior styling and plethora of standard appearance and cabin features as the perfect accompaniment to its stunning driving capabilities. The Evolution’s Brembo brakes and three-mode AWD system also come in for a considerable share of owner kudos, leading some to laud its notch-above-average value.

What's your take on the 2011 Mitsubishi Lancer Evolution?

Thaine The MR model provides amazing performance for the price. The SST transmission shifts so fast that onramps are worth seeking out just to experience the combination of speed and quick shifts

Have you driven a 2011 Mitsubishi Lancer Evolution?
Rank This Car