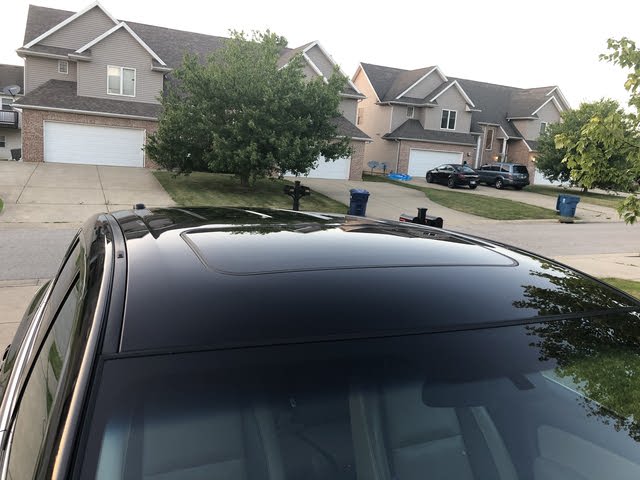 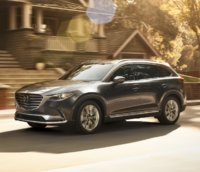 Stout handling, real-world space and comfort in three rows and a powerful and refined engine are all packed into an attractive package in the 2011 Mazda CX-9.

The CX-9's 16/22 mpg just doesn’t stand out in 2011, and actually detracts from an otherwise solid package.

With small suspension refinements and some of the tech that make the Cyclone V6 such an impressive performer in the Mustang, the 2011 Mazda CX-9 could be a real powerhouse. Unfortunately, that has yet to congeal for the vehicle, leaving it with 20th century fuel economy that is fast becoming not just undesireable, but unacceptable. If you can overlook more frequent trips to the pump, however, the CX-9 is a heck of a competent crossover and well worth a look.

The 2011 Mazda CX-9 offers station-wagon utility without the stigma of being called a station wagon. Instead, Mazda wisely badges it a full-size crossover, a much more appealing term. Coming off a midlife redesign, the CX-9 sees no changes for 2011. It comes in three trim levels – Sport, Touring and Grand Touring – all powered by the same engine/transmission combination of a 3.7-liter V6 paired with a six-speed automatic. With seating for 7, the CX-9 can handle family duty as well as light hauling, with a maximum towing capacity of 3,500 pounds and the option of front-wheel or all-wheel drive. 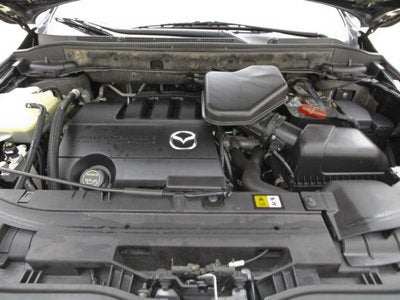 Regardless of trim level chosen, the CX-9 gets a 3.7-liter V6 attached to a six-speed automatic with manual shift. It’s a good thing, too, as the six-speed can be reluctant to downshift in certain situations, but otherwise it handles its duty with poise and confidence, smoothly grabbing gears under mild to hard acceleration. If quick passing power is needed, resort to manual shift and drop a cog or two.

The 273-hp 3.7-liter V6 isn’t a monster, but it’s not underpowered either. It’s part of the DOHC Cyclone family of Ford engines that have powered everything from the F-150 to the Mazda6. Most notably, it was used in the Ford Mustang and was the first engine to produce 300 hp and deliver 30+ mpg. It has variable valve timing, direct-acting mechanical buckets and an all-aluminum design. While capable of much more, here the 3.7 delivers 16/22 mpg on regular-grade gasoline.

Crossovers are touted as exhibiting car-like handling with SUV convenience. That’s not exactly the case here, as the CX-9 can react harshly to irregular road surfaces. Thankfully, this also means lean and roll are controlled at least moderately, especially for a vehicle of this size. Turning radius is also surprisingly tight, allowing for an ease of maneuvering not usually seen in this class.

There’s little difference felt between front-wheel- and all-wheel-drive trims, or between the standard 18-inch wheels and the 20-inch wheels that come with the Grand Touring trims. The larger wheels do little to improve handling, but do increase tire noise over rough surfaces.

The CX-9 advertises itself as having a seven-passenger seating capacity, and this is an accurate assessment. Even the third row can fit average-size adults comfortably, although not for longer than short trips. The first and second rows are both comfortable and supportive, with plenty of room. The only issue is with the optional sunroof or DVD entertainment system, both of which hamper headroom.

Standard wireless cell-phone link and optional voice-command navigation system operate well, but require distinct diction to prevent problems. Otherwise, most controls are within easy reach and don’t disappoint, although some have complained about the visibility of some gauges and controls in difficult light conditions.

Due to the revamped testing procedures of the National Highway Traffic Safety Administration (NHTSA), the 2011 Mazda CX-9 safety results have yet to be released. For 2010 however, the CX-9 was awarded a five-star rating in all tests, but this should not be used to assume the rating for 2011.

The CX-9 handles like a car, hauls like a station wagon, and offers relative comfort as well. Fuel economy is painfully low, especially for an engine that is touted as one of the world’s most efficient, and that has a major effect on the overall perceived value of the vehicle. Still, with an attractive visage, a comfortable ride and a strong, reliable engine, it’s a small weak point in an otherwise great car. The only other major complaint heard regards a lack of rear visibility, a large obstacle to overcome in a full-size crossover.

GuruY797R It was never on my research list but I was at the dealers lot and had a Makeithappen salesman who was fantastic for my car research. I was there to test four other models when I saw him move this car then discussed it and was fourth on my road test and it was a toss up between this car and a Lexus which both were in my present budget to buy a used car. My salesman was great I had not planned on this car but it won me over. I had researched Nissan Rogue, Murano, Pathfinder, Honda Pilot, CRV, Crosstour, Honda Crosstour, Acura RDX, KIA Sorento, Lexus RX, Jeep, and other crossover suvs and passenger cars.

GuruTG1WZ I've had mine since Feb. 2018. Six months later and we love it more than ever!

My low beam headlight in Mazda CX-9 is turning pink and few minutes later is completely off. When I turn the engine off and the bulb lights up again. Is it the bulb problem or something different?

Looking For Advice - What Is The Long Term Life On A Mazda? How Do They Fai...

I Have A 2011 CX9 Touring And Every Time I Turn Left Water Comes Out Inside...