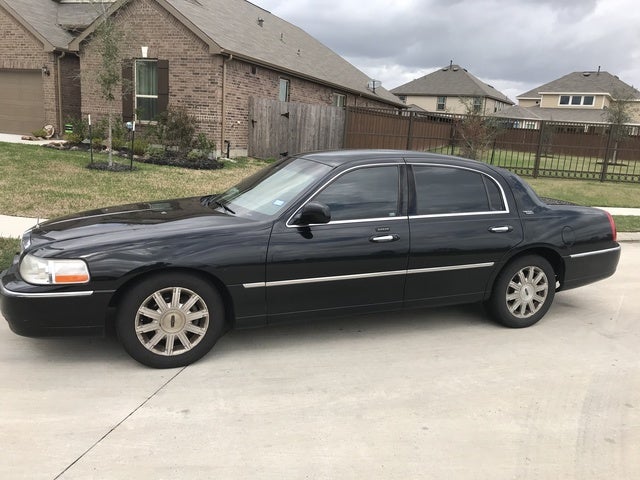 The legend lives! For those with a yen for the past and a need for passenger room and comfort, not to mention the capacity to carry enough luggage for a world cruise, the 2011 Lincoln Town Car carries on in its traditionally staid, stately, studied manner. Virtually unchanged from 2010, this full-size, six-passenger sedan is offered in two trim levels, the 117-inch-wheelbase Signature Limited and the 123.7-inch-wheelbase Signature L. Both trims are rear-wheel drive (RWD) only, and each is equipped with the sole powertrain for the lineup, an anemic V8 with its accompanying Jurassic-era four-speed automatic that barely keeps up with modern four bangers equipped with five- or six-speed transmissions. Latter-day competitors such as the Hyundai Genesis, Lexus ES 350, and Toyota Avalon, though more efficient, more powerful, and less expensive, simply lack the cachet of Lincoln’s battlewagon. After all, what world-traveling bon vivant or corner-office-holding executive wants to get picked up at the airport or driven to corporate headquarters in a Hyundai or Toyota?

The only engine available for the 2011 Town Car lineup is an E85-capable 4.6-liter V8 FFV that, with its dated four-speed transmission, puts out a mere 239 hp, albeit with a hefty 287 lb-ft of torque. Though it may struggle a bit from a start and can be adventuresome in merging and passing, this dowager will tow 1,500 pounds of bass boat with comparative ease. Alas, its EPA figures, at 16/24 mpg, continue to underline the inefficiency of this outmoded powertrain.

Options are at a premium, with only the Continental Package’s 18-spoke polished chrome alloy wheels and upgraded upholstery, and a deck-leveling trunk organizer as available amenities.

When owners and drivers complain about the 2010 Town Car, tepid performance from its out-classed V8 powertrain usually tops the list. Laments regarding poor mileage figures, dated styling, and insipid handling characteristics often follow this legitimate gripe. There are those owners, however, who say that the Town Car overcomes many of its shortcomings with its capacious cabin, titanic trunk, royal ride, and cornucopia of creature comforts.

TheHorror If you would accept this wallowing broughamed taxi as a luxury car, you really have no standards of which to speak. These were laughable over a decade before they were discontinued.

Guru9494P Oh curator of all cars large and small. Go back to grade school. These Lincolns are the most comfortable road cars out there. Easy to get in and out of, decent styling, and enough power for the senior generation.

CZQ the town car with its 4.6 V8 engine can go 700000 miles with no problem, the Tranny will go till 360000 miles, the rear will need to be replaced at 250000, you can replace both shafts & inner outer bearings, the best bang for your buck the car is bullet proof, you guys don't know what your talking about the only car that can run 24/7 a work horse for the limo industry. comfortable ride, air suspension, awesome ride there will never be another like it a workhorse!

tpkatsa Have a 2003 Lincoln Town Car - there isn't a more comfortable ride south of an S-Class or a Bentley. People who drive these cars aren't looking for speed, they are looking for style and panache. Properly detailed these cars look absolutely regal. Of course, in tight spaces and parking lots, I get a lot of "Queen Mary," "Luxo-Barge" and "land-yacht" jokes. But I take 'em in stride. :-)

GuruB234X ARRRRRR I Sail This Grande Lady cross the land is a fine manner. She be of buxon breast and vast expanse, She rolls the waved road. We roll together as lovers in an unrushed intimate embrace. Worries and cares swept away by her loving bosom and gentle embrace. And when we part ways , I long for her sweet embrace and to ride yet again.... Tis a lincoln...........

mrstevens70 I can't wait to get mine.

David I have a 2003 Lincoln Town Car. Is it "What a Luxury Car Should Be". I've had Mercedes and BMW's. If you drive at 9/10ths of their limits they will be better; however, for general suburban and highway crusing the Lincoln Town Car wins hands town. Beautifully appointed interior holds up much better than BMW and Mercedes and the Town Car is silky smooth. There is also real luxury in peace of mind in regards to reliability and maintenance. I'm tired of my Mercedes and BMW suffering from electric glitches, faulty sensors, $200 air filters, oil filter gasket housing leaks, etc etc. The Lincoln is bullet proof and maintenance is more than reasonable. Awesome car!

Exponent9 The Panther platform had a unique position as the last full-size, body-on-frame, V8, RWD car for sale. Those nostalgic for that formula are willing to overlook a lot of flaws in the cars themselves — mediocre build quality, mediocre power, abysmal handling, slapdash build quality, antiquated interior materials and features, terrible gas mileage, and horrible crash safety. I understand that the Town Car is not a sports sedan, but there were always better competitors over it’s entire Panther-based lifespan.

Have you driven a 2011 Lincoln Town Car?
Rank This Car

143 views with 2 answers (last answer about a year ago)

Is There A Reason A Car I Have For Sale Only Shows Up Intermittently?

I put a car on CarGurus for sale but it doesn't always show up on the list every time I log in to look. Is there a reason it shows up intermittently?

Can You Remove The Vinyl Top From A 2011 Town Car?

I want it to be a hard top, but I'm not sure what is involved in removing the vinyl top. Will the car have to be repainted?

Is there a factory installed block heater on my 2011 Lincoln Towncar, Signature Edition? I live in Chicago area, very cold.