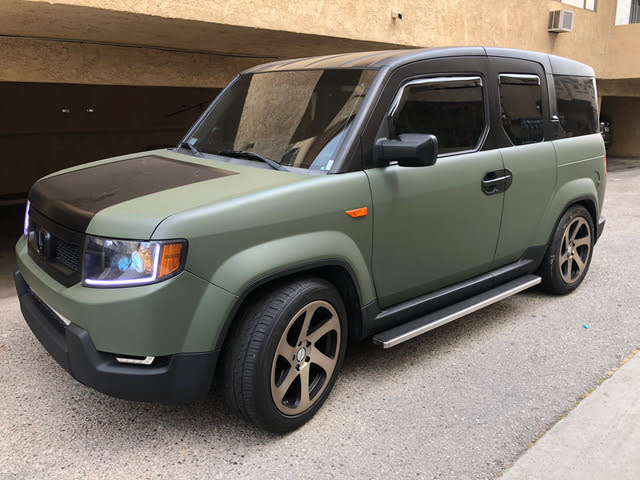 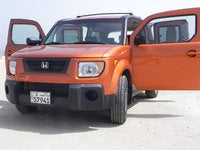 The party is officially over for the Honda Element. The quirky crossover showed up in 2003 and apart from a slight refresh in 2009, remained unchanged throughout its model life. Rumors had circulated about a redesign coming in 2012 or as late as 2014, but Honda made it official in December – lackluster sales have shifted priority to other SUVs in Honda’s lineup, and 2011 will be the last year for the Element.

It wasn’t a large leap to make, given Honda had dropped the sport-themed SC trim level this year, as well as the navigation system option. After excising those options only the EX and LX trim levels remained, powered by the same 2.4-liter K series Honda engine. DOHC design and variable valve timing is used in the aluminum head, and the aluminum block has cast iron cylinder sleeves. Paired with a five-speed automatic transmission it’ll generate 166-hp at 5,800 rpm and 161 lb-ft of torque at 4,000.

Estimates for the Element with regard to fuel consumption aren’t anything to crow about and could be a reason sales dropped off so dramatically. While first-year sales of 67,000+ outperformed Honda’s 50,000-unit expectation, last year the cargo cube barely bested 14,000. While a 20/25 mpg rating for a front-wheel-drive crossover was fine in 2003, it’s become almost unacceptable just seven years later. Choose the all-wheel-drive option available with either trim and you’ll find fuel economy dropping to 19/24. At least it doesn’t require premium-grade gasoline.

And with features disappearing faster than the free coffee at an AA meeting, it’s a surprise one of the more eccentric option packages out there didn’t meet the chopping block, too. After winning dogcar.com’s “Dog Car of the Year” award in 2007, Honda put together a Dog Friendly Package for the Element. Designed to make life easier for canines and their companions, the Dog Friendly Package adds a stowable ramp, rear kennel and bed, an electric fan with 12-volt hookup, special dog-themed seat covers, floormats and badging, and a spill-resistant water bowl that fits into the corner of the rear cargo area. It’s still available in this last year of production, albeit only with the EX trim.

Dog-friendly or not, the Element is ready to haul cargo. Its urethane floor means spills of any kind are an easy cleanup, and the suicide rear doors obviate the need for a B-pillar, leaving a wide-open space through the center when all four doors are thrown akimbo. Rear cargo area is similarly accommodating, with Honda bragging about 64 different cargo configurations due to second-row seats that can be folded, stowed or removed. Adjust to your liking and haul anything you like, as the Element comes with standard rear privacy glass to keep everything nice and shady.

Honda is no stranger to safety, and the Element got the full treatment across the trim lineup. Standard traction and stability control are joined by brake assist, four-wheel antilock discs and six airbags including curtain-side units with rollover deployment. Recalls last year initiated a brief stop-sale order from Honda, but issues with the faulty shift-lever cable were quickly remedied, and only 585 vehicles were affected by the recall. There was also some talk of excessive safety concerns being the reasoning behind the Element’s curiously-low 675-pound maximum payload, but a 1,500-pound maximum towing capacity (with the required optional hitch) does make up for some of the weight restrictions.

Regardless, this is your last chance to snap up the Element, and it’s simply too late if you had your eyes on the SC trim. Honda is guessing more accessible vehicles like the CR-V will win the day in the future, and sales seem to back up that contention. But then, what can you expect from a vehicle that receives almost no attention in a near-decade’s worth of shelf life? I’m guessing had they managed to squeeze 30 mpg out of the Element and given it a bit more mid-cycle attention, they would’ve had a long-term winner on their hands.

GuruKYKX The Honda Element is by far the very best automobile ever built. I have owned over 40 cars in my life and the Element is the one car that will do it all; It can easily pulled a loaded trailer (size proportionate), it will hold both a washer & dryer (seats out & all doors closed), It will sleep two average adults, and has more room than high school gymnasium during summer break. Shame on Honda for discontinuing the Element.

GuruB2T1W Now winter 2019 and wishing that the Element were back. Looking around town there are Elements here and there, all in fine fettle. Honda's Element sales must have slowed back then because they last so well and the owners just keep on trukkin'. Now looking at the HR-V and wishing that Honda could attach the B column to the front doors with latch top and bottom, and swing the back doors like the Element had. Why? Because as we get older it is harder to bend the knees so the feet get stuck between the seat and the frame. And because moving is a required reality every so often the the Element could do it handily. Hey, Honda, bring us back our Element!

Have you driven a 2011 Honda Element?
Rank This Car

What Does AT Mean For The Honda Element?