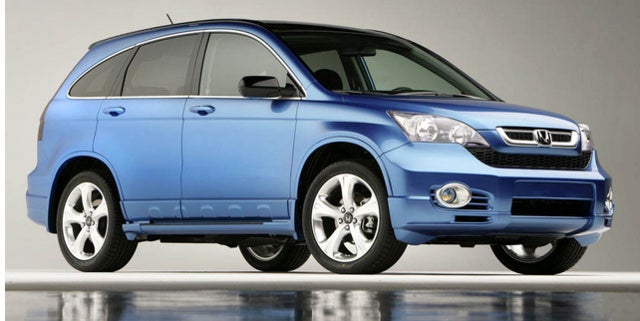 The lack of an available V6 engine and auto-manual transmission as well as a noisy ride conspire to dent the 2011 CR-V’s reputation in the compact SUV segment.

Despite its weaknesses, the 2011 Honda CR-V loads up on value, performance, reliability, and crashworthiness to present itself as a better-than-decent family auto. Lots of passenger and cargo room as well as noteworthy agility seem enough to overcome its lack of V6 power.

Honda’s 2011 CR-V is automotive proof that good things come in small packages. Essentially unchanged from 2010, this five-passenger compact crossover is legendary for its nimble handling, roomy cabin, decent looks, and, of course, Honda reliability and build quality. Don’t expect, however, any serious get-up-and-go from its tepid inline four-cylinder (I4) engine. Unfortunately, there’s no escaping this lack of oomph, since it seems it’ll be cold day in Hades before Honda will allow a V6 to sully its cute ute – though it did allow the four-banger an extra 14 hp in 2010. Though able to maintain a steady if not blistering highway demeanor, complaints about a lack of horsepower have plagued the CR-V pretty much since its mid-’90s inception, though nobody’s complaining about its heady fuel economy. Owners can expect 75 cubic feet of cargo space with the rear seats folded down, though the mechanism for keeping the seatbacks packed down is somewhat chintzy, according to a couple of reviews.

Four CR-V trim levels are now available, with an SE trim added for the 2011 model year. The base trim is still the LX, with the SE coming next, then another step up to the EX, and finally, the EX-L trim level, with the “L” implying luxury appointments, though it’s not exactly Acura-like. In any case, all four trims are available in traction-happy, full-time four-wheel-drive (4WD) versions, and, believe it or not, all four can be equipped with a trailer hitch, though they can’t be expected to haul much more than lawn clippings or perhaps a couple of lightweight bicycles.

Competition for the CR-V can be found in the form of the Kia Sorento, Chevy Equinox, Subaru Forester, and Toyota RAV4. While the CR-V can hold its own against all of these rivals, competitors' base price, available V6 power, and quietness are, in most cases, a tad better than what the CR-V has to offer. 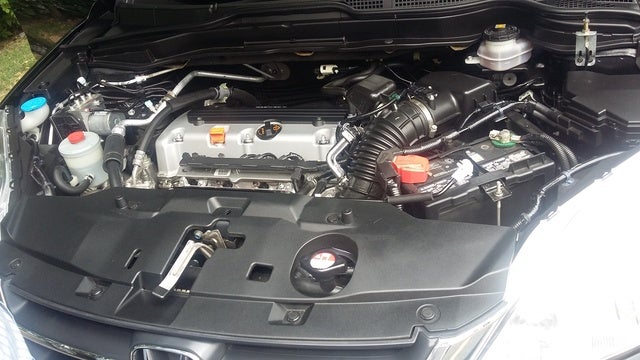 Standard power, indeed the only power for the 2011 CR-V, comes from a variable-valve-timed (VVT) 2.4-liter I4 engine that’s managed by a standard five-speed automatic transmission. This combo will put out 180 hp at 6,800 rpm and 161 lb-ft of torque at 4,400 rpm. Towing capacity is limited to 1,500 pounds with the I4, but VVT keeps mileage at a respectable 21/28 mpg in front-wheel-drive trims, and a marginally less conservative 21/27 in 4WD trims. Said 4WD versions, meanwhile, are tutored by a mechanical, center-mounted limited-slip differential that provides power to all four wheels, all the time.

In addition to bemoaning a dearth of harnessed ponies, many reviews are a bit put out by the fact that the 2011 CR-V still doesn’t provide a shiftable automatic transmission. One test of the I4 engine found it clambering from 0-60 in just over 10 seconds, but reviewers seem to consider this at least adequate for most normal driving conditions. Though not exactly state-of-the-art, the five-speed automatic nevertheless is described by many reviewers as smooth and alert, though expect a lot of downshifting in hilly terrain. Finally, the I4 displays the impolite tendency of the breed to be quite raucous on acceleration.

The 2011 CR-V’s relatively nimble handling can be attributed, in part, to the rubber on the road. The base LX trim sports 17-inch steel rims and tires, while the rest feature 17-inch alloy wheels. Wheels and tires are complemented by a four-wheel independent suspension boasting MacPherson front struts, as well as front and rear stabilizer bars and a multi-link rear end.

A number of reviewers are quite taken by the CR-V’s steering feel and lack of significant body lean in even the most tortuous of curves. Though stopping short of describing this compact crossover as jaw-dropping, the word “fun” is thrown helter-skelter among a number of reviews. No doubt the near-ubiquitous unibody construction common to today’s CUV’s has much to do with this ballyhooed stateliness. Even braking, traditionally a sore point among Honda’s automotive products, is noted by most reviewers as more than simply competent. Alas, reviewers also note that the CR-V does tend to ride a little stiffer and with quite a bit more clamor than many of its rivals, thus detracting more than a tad from any intended aura of refinement.

At the high end of the CR-V food chain is the EX-L with leather upholstery, eight-way power-adjustable driver’s seat with power lumbar support, heated exterior mirrors, dual-zone climate control, and a 270-watt audio system with a subwoofer, XM satellite radio, and a USB connection.

Perhaps the most notable and most expensive option with this precious ute is the voice-activated DVD navigation system, available only for the EX-L trim. The available navigation technology also adds Bluetooth hands-free communications into the mix. More plebian options include the availability of several standard features in upper trims trickling down to the lower trims, as well as remote engine start, upgraded wheels, backup sensors, upgraded cabin accents, and step running boards.

Though some reviews are less than effusive in their praise of the 2011 CR-V’s choice of cabin materials, virtually all agree that interior workmanship and assembly quality are top-notch. Cabin storage is described by most as ample, while the dual glovebox arrangement proves to be an especial hit with several reviewers. Seats, meanwhile, are noted by most reviewers as supportive, but, according to some, a tad too firm for long-distance traveling.

As seems traditional, the National Highway Traffic Safety Administration (NHTSA) gave the 2010 CR-V five stars in all front- and side-impact tests, and four stars in rollover testing of both FWD and AWD trims. The NHTSA is in the process of re-designing testing criteria for all vehicles sold in the U.S., thus testing on 2011 vehicles is somewhat limited at the moment. However, with the 2011 CR-V being essentially a carbon copy of the 2010 version, testing done on the 2010s can be considered a reasonably accurate assessment. The Insurance Institute for Highway Safety (IIHS), meanwhile, gives this compact ute its highest rating of Good in front- and side-impact tests, but only its next-to-lowest grade of Marginal for roof strength.

A calamitous rush of noise from road and wind as well as the lack of an available V6 powerplant seem to be tops on the list of owner gripes with the 2011 CR-V. Its stiff ride also doesn’t sit well with more than a few owners, nor does a bit of straining to see out the rear window when reversing. According to a number of owners, stowage of the folding rear seatbacks, though not difficult, is a bit more awkward than need be when using the inconvenient and fragile-looking hold-down clip. Finally, gas mileage figures, especially in AWD trims, are claimed by a few owners to be a tad under-estimated, though that sort of thing often depends, in large part, on driving habits and terrain.

Cabin room, however, as well as Honda reliability complements pleasant, if not exactly snappy styling, comfy seating, and overall excellence in workmanship, especially interior assembly quality, in keeping owners well-satisfied with this compact crossover. Other positives, such as its nifty handling, logically placed controls and buttons, and handy maneuvering capability in tight spaces, also do their part to keep the CR-V’s better-than-average value uppermost in the minds of most owners.

jnew24 Great used car buy. With the 2015's now out you can get a 2011 EX-L for around $20K. It is fun to drive and if pushed has plenty of pep. I drove this up Vail pass last week and was able to go 80 mph with a passenger and luggage. It will wind the engine up to 4500+ rpms, but this little ute handles that well. As the review claims, the steering is tight and accurate. Not a jeep, but it can handle light off roading well. Enough to get you to most hikes, fishing areas, etc.Very comfortable interior, leather seats are fine for long distance trips. Averages about 28 mph combined city/hwy. I personally think the generation 3 has more interesting lines then the new model. Put some blizzaks on in the winter and there's virtually no where you can't go. I do wish it had standard bluetooth like the 4th generation. I give it 5 stars overall.

Users ranked 2011 Honda CR-V against other cars which they drove/owned. Each ranking was based on 9 categories. Here is the summary of top rankings.

A "check Fuel Cap" Message Appears But No "check Engine" Message. What Does...

I had Honda dealer check and with no "check engine", they could not find any codes to base any action on. They said to bring it back when I had a 'check engine" indicator so they could read the code...

Radio Will Not Work After Battery Change.

I had a new battery put in my CRV and now the radio/navigation/backup camera will not work. It is asking for a security code, which I do not have. How do I obtain this?

2011 CRV TPMS light always on. Not low pressure light. How can you fix without taking it to a dealer?

How Do I Reset The Radio Code If The Error Code Is: E

Battery was dead due to headlights left on all night. Tried to reset several times with good 5 digit # but currently the display shows: CODE ERROR E Time read out but time is wrong Do I disconnect/r...

I listed my car on cargurus. Receive email saying person show interest, but no word from this person. Don't know what this person asked ... When replied it shows as a unread message. Anyway how pote...