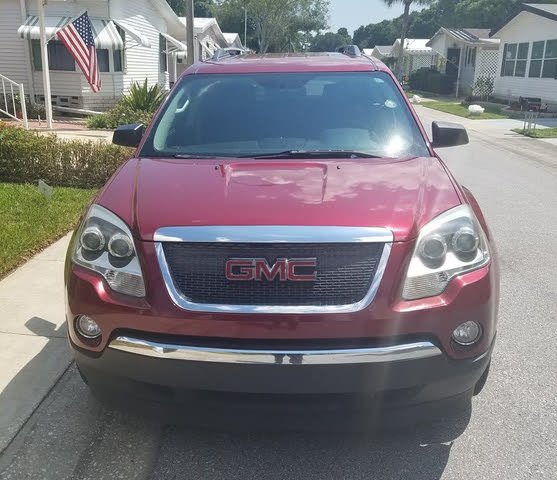 The roomy, cargo-packing, zippy 2011 GMC Acadia bridges the gap between a delicate minivan and an over-muscled SUV quite nicely. Despite its appetite for gas and occasionally cumbersome handling, this family-friendly crossover boasts loads of standard features and aces its safety tests, putting it among its class leaders for utility, dependability, and passenger comfort.

For those torn between buying a nerdy minivan or a muscle-bound full-size SUV, there’s the 2011 GMC Acadia. This spiffy, spacious, and sensible midsize crossover offers three rows of seating, a peppy V6, comfy cruising, and tons of standard features, even in its base trim. A few tweaks for 2011 include a posh Denali trim level and a standard six-month subscription to OnStar’s Directions and Connections feature. Again sharing its revolutionary unibody Lambda platform with its cousins, the Buick Enclave and Chevy Traverse, this decent-size crossover combines SUV-style cargo-carrying ability with almost car-like ride comfort, and boasts nearly perfect safety scores while doing it.

The 2011 Acadia comes in five trim levels, the base SL, SLE, SLT 1, SLT 2, and now the top-shelf Denali. All trims are available in either front-wheel-drive (FWD) or full-time all-wheel-drive (AWD) configurations, and all feature fold-flat second- and third-row seating that allows some 117 cubic feet of cargo room when all are folded. That’s tops in its class, and even beats out a few full-size SUVs.

Such state-of-the-art technological features as standard OnStar navigation and XM satellite radio grace all trims, with the higher levels boasting available touch-screen DVD navigation, standard Bose audio components, and a standard USB connection. Cabin storage, meanwhile, is described as better-than-adequate, and even third-row seating is acknowledged by nearly all reviewers and owners as adult-friendly – for a change.

Designed to battle the likes of Ford’s Flex and Explorer, as well as Hyundai’s Veracruz and Mazda’s CX-9, the Acadia, though not as nimble as some, nor as technologically exotic as others, packs a lot of utility into a small package. GMC sure hopes this midsize crossover will continue to keep its head above water in a crowded market. 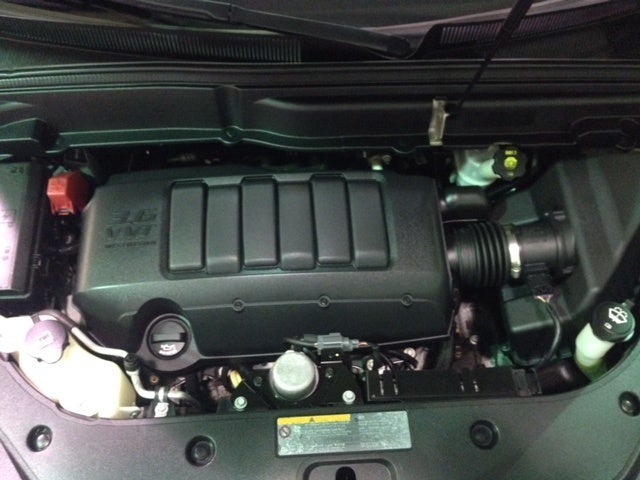 A single 3.6-liter V6 engine powers all 2011 Acadia trims. This 288-hp (at 6,300 rpm) V6 is a carryover from 2010, as is the standard six-speed auto-manual transmission that allows it to pound out 270 lb-ft of torque at 3,400 rpm. Despite variable valve timing, this ubiquitous powerplant is estimated to get a rather tepid 17/24 mpg in FWD versions and 16/23 with AWD. Towing capacity, however, is a reasonably hefty 5,200 pounds with the proper equipment.

Virtually all reviewers find acceleration more than adequate, indeed surprisingly strong, in the 2011 Acadia, with plenty of reserve for merging and passing. Many reviewers found FWD trims a little quicker off the line than the heavier AWD versions. Reviewers also laud the smooth-shifting six-speed auto-manual, but a few mention a bit of hunting and pecking for the proper gear when downshifting.

The 2011 Acadia is considered by most reviewers remarkably agile for its size, though the weightier AWD trims can seem a bit ponderous in city traffic. A four-wheel independent suspension with MacPherson front struts complements front and rear stabilizer bars and a multi-link rear suspension to create a surprisingly smooth ride on the SL and SLE’s standard 18-inch tires. The SLT trims, with their standard 19-inch wheels, are noted to be a bit stiffer, but not unpleasantly so. The 20-inch wheels equipping the Denali trims seem more bump-absorbent than the 19-inchers.

Most reviewers describe the FWD Acadia trims as well-mannered and nimble for their size. AWD trims, on the other hand, even those with 19- and 20-inch tires, seem to many reviewers a bit more challenged in outright handling capability, but worth their weight in gold on wet or snowy roads. Do not, however, mistake the Acadia AWD trims for off-road vehicles; the results will be disappointing and expensive. One notable drawback with the Acadia is difficulty maneuvering in tight spaces due to its length and girth.

The new-for-2011 Acadia Denali approaches downright decadence with all the goodies in the lower trims, as well as a windshield-focused head-up display, power sunroof, auxiliary engine cooling, and wood-grain cabin accents.

Options run the gamut from a towing package with heavy-duty engine cooling, as well as some of the SLE’s standard goodies for the SL trim level, to rear-seat DVD entertainment, touchscreen DVD navigation, perforated leather upholstery, and eight-passenger bench rear seating on the higher trims. As one would expect, many of the higher trims' standard features are also available for the SLE and SLT1.

Reviewers, for the most part, laud the Acadia’s cabin space, functionality, and storage capabilities. The dash is noted as being well laid out, with easy-to-discern gauges and most controls within convenient reach. Some low-budget plastics, however, as well as a few small, indistinguishable buttons, mar what could be almost the perfect midsize cabin. Especially appreciated by reviewers are the Acadia’s flat-folding rear seats and unusually adult-friendly third-row seating. The ability of second-row seats to slide back and forth, according to many reviewers, contributes to the comfort level in the aft-most seats, not to mention easing access considerably.

Testing of the 2010 Acadia by the National Highway Traffic Safety Administration (NHTSA) resulted in its best five-star rating for front and side impact protection, as well as rear passenger side-impact protection. Four stars were awarded the Acadia for rollover protection in both the FWD and AWD versions. Further, the Insurance Institute for Highway Safety awarded the 2010 Acadia its highest ranking of Good across the board. With essentially the same underpinnings and occupant protection characteristics, expect the 2011 Acadia to perform just as well.

As the 2011 Acadia is fresh into dealer showrooms, virtually no consumer information is yet available. Owners of the similar 2010 Acadia trims mention a few glitches that may bear closer inspection, among which are tepid (at best) gas mileage numbers, and a disturbingly excessive forward roll when the Acadia is put into reverse or park. Neither quirk seems to have been addressed for 2011. Nor has there been an improvement in the somewhat chintzy interior plastic that some owners feel degrades an otherwise handsome interior. Poor visibility to the sides and rear due to large roof pillars also plagues a number of owners of the 2010 Acadia, as does a bit too much reflection off of some unimaginatively placed alloy center console trim.

On the positive side, virtually all owners of the 2010 Acadia laud its passenger room and cargo space, while many are taken with its exterior and interior styling. Engine performance, safety features, and a better-than-expected ride, as well as decent handling characteristics – at least on the open road - also caught the fancy of more than a few Acadia owners.

Users ranked 2011 GMC Acadia against other cars which they drove/owned. Each ranking was based on 9 categories. Here is the summary of top rankings.

Have you driven a 2011 GMC Acadia?
Rank This Car

Remotely or inside vehicle, my rear deck door won't open

Why Does My Gmc Still Show Bad Timing Chain After The Chain Has Been Replac...

So everyone knows the GMC timing chain issue. Well I replaced my timing chain. And it still throws the same codes. Misfire in cylinders 1,3,5. Help!

SLT, SLE what does that mean in GMC Acadias

174 views with 3 answers (last answer about a year ago)