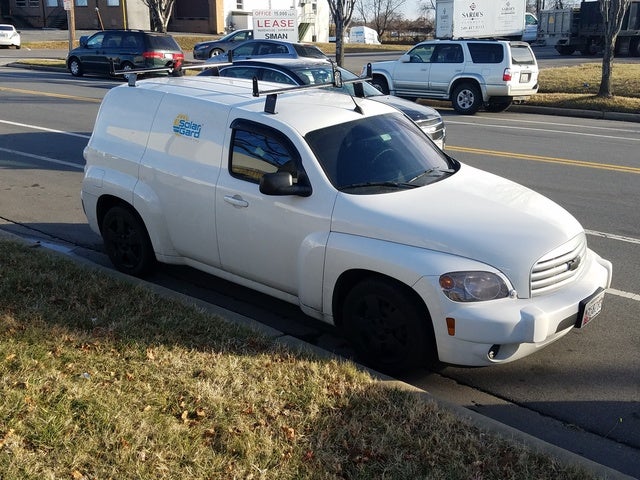 The 2011 Chevrolet HHR is stylish, comfortable, and roomy - an interesting alternative to the minivan culture.

Sadly, retro styling has become passé again, and with the deletion of the SS trim, there’s very little left to draw customers into the 2011 HHR.

If you’ve always wanted an HHR, this is very literally your last chance. The manual offers a large advantage over the automatic, whether in feel, fun, or fuel economy, but the automatic is still a competent choice. A shame the SS was discontinued for this final year, as it was the best bet of the lineup without exception. Instead we get a soft and subtle swansong for this sullied stepchild of retro reminiscence.

June 7th marked the start of the final year for the HHR – the retro-rod that came too late. It was an ignoble genesis for the HHR, the car that rose up as a direct challenger to the PT Cruiser. After the Cruiser’s debut in 2000, lead designer Bryan Nesbitt left Chrysler to join GM in April 2001, and in 2005 he tried the same trick again at Chevrolet with the HHR. Now just six years later, 2011 will see the last of the HHRs leave the factory floor, with production officially stopping in May 2012.

Predictably, there’s little new to offer for the HHR in 2011. Some color-code shuffling and an upgraded introductory OnStar package that now includes six months of the Directions and Connections plan with Turn-by-Turn Navigation in addition to the full year of Safe and Sound are the sole changes. That means the same LS/LT trim lineup continues in five-seat regular and two-seat panel configurations, the latter offering a delivery version that deletes rear seats and windows in favor of storage space.

The LS and LT1 trims are powered by a 2.2-liter, inline four-cylinder (I4) engine good for 155 horses, while a 2.4-liter four produces 172 hp and is available as an option in the LT1 trim and comes standard in the LT2. Both engines are underpowered, but the 2.2-liter is especially so, with its peak torque of 150 lb-ft not arriving until 4,800 rpm and peak power showing up 1,300 rpm later. Both engines are capable of running on E85 fuel, however. On regular fuel with the five-speed manual transmission, the 2.2-liter engine produces 22/32 mpg, dropping 2 mpg on the highway with the four-speed automatic. The 2.4 puts up similar numbers – identical to the 2.2 with the five-speed and 22/29 with the automatic.

While capable, models without the sport suspension can let go under hard cornering, porpoising toward the apex. The 17-inch wheels on the LT2 trim do improve grip, and thankfully do little to harm overall ride comfort, but even this sportier trim lacks the chops to be called a truly performance machine. Still, even trims without the sport suspension manage to handle most corners with little anxiety, and slow-speed maneuverability makes parking and turning a breeze.

The HHR’s updated interior design initially seems out of place when viewed in contrast to its retro interior, but overall it seems to mesh well. Stylized script on the gauges is easy to see, but sometimes hard to decipher. That said, gauges are well-placed, and controls are in reach.

Given the impressive seat height of the front buckets, additional vertical adjustment on the steering wheel would be welcome, but should only be necessary for those of more generous stature. Otherwise seats are comfortable and supportive, with modestly sized adults fitting quite nicely in the rear. Nicely textured plastics are found throughout the cabin, but they are still merely hard plastics and do take away from the overall ambiance of the HHR. Some drivers will additionally find frustrating visual impediments, with a sloping roof and large pillars front and back. Opt for the rear-view camera to alleviate this shortcoming.

The HHR’s array of standard safety features includes dual front and curtain-side airbags, daytime running lights, antilock brakes, and an antiskid system. This has led to a five-star NHTSA rating throughout the HHR’s life, along with a four-star rollover rating.

The overall ride and look of the HHR are overshadowed by underpowered engines – an issue that used to be corrected in the SS. Here, drivers will have to rely on the manual transmission to offer any semblance of sport, hopefully enough to distract them from the cheap plastic interior and multiple blind spots.

wingerg I own this car and I think it's the best car I have owned besides my Toyota but the fact that the all the seats go down (including front passenger seat) gives this vehicle a lot of options as far as room and space inside and room to move things and still have seating. It's like owning a van & a car in one. All the options are great and controls on the steering wheel as well. What I like is this vehicle does not look like any other car which is the problem with all cars today as they all look alike.

Have you driven a 2011 Chevrolet HHR?
Rank This Car

Should I Install An Interface Or Not?

I want to install an aftermarket stereo in my 2011 Chevy HHR LT. My car has no steering wheel controls for the factory radio, only controls for cruise control, oil life, tire pressure etc. Do I sti...

I have a 2011 hhr brake light and signal lights stopped working running lights work fine. I changed bulbs (3157) bulb number.. I used my tester to check the sockets they seem to work just fine whe...

Why Can I Hear The Radio Playing But Have No Sound From Speakers.?

I can hear the radio playing but I have no sound from the speakers. The car is a 2011 HHR .

I'm thinking about purchasing a 2011 chevy hhr It's a LS with the 2.2. It has a 103 thousand miles on it. Are these reliable cars? Any common issues or problems?