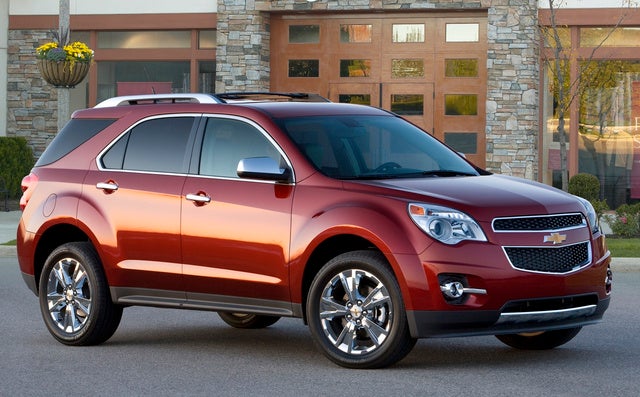 Ho-hum handling, a few chintzy cabin materials, and the lack of three-row seating tarnish the 2011 Equinox a bit.

What’s not to like about the 2011 Chevrolet Equinox? It’s got style, safety, comfort, and performance, all at a reasonable price. Sounds to us like one of the better choices for an economical family car.

Coming off a significant redesign for 2010, the 2011 Chevrolet Equinox, with a few minor tweaks, stands pat. This five-passenger midsize crossover has a lot to offer for a reasonable price, including loads of standard creature comforts, plenty of quiet cabin comfort, adequate if not inspired power from a choice of two engines, and a gentle though somewhat yawn-producing ride from its Theta-based unibody platform. Furthermore, it offers a tolerably generous, though not exactly cavernous, 63.7 cubic feet of cargo space with the rear seats folded. All this also comes with a few pluses, such as the slick MultiFlex sliding rear seats and standard OnStar Directions and Connections, as well as a few minuses, like some cheap interior materials, a few issues with quality control, and some iffy handling characteristics. Another significant minus is a significantly wider turning radius than ought to be warranted, which may, unfortunately, result in some adrenalin-charged parking maneuvers. Nonetheless, this snazzy ‘Ute retains the flowing and aggressive exterior that won lots of praise in 2010, while adding such niceties as E85 capability to the available V6 and standard heated front seats in the LT2.

Again for 2011, the Equinox comes in four trim levels, the base LS, midlevel LT1, perked-up LT2, and top-shelf LTZ. All trims are delivered with standard front-wheel drive (FWD), but all are additionally available with full-time all-wheel drive (AWD) for a hefty step up in price. Standard four-cylinder power comes with all four trims, while the various LT and LTZ trims are additionally available with a V6 powerplant along with its accompanying 18-inch alloy wheels. The trims equipped with the four-banger roll on standard 17-inch alloy wheels.

Value seems to be the operative word when discussing the 2011 Equinox, since it stacks up pretty well with its major competition in this fierce market. Such competition includes the Ford Flex, Nissan Murano, Toyota RAV4, Honda CR-V, Hyundai Veracruz, and Mitsubishi Outlander. If there's one aspect where the Equinox is a bit stronger than the rest, it’s in fuel economy, while a major weakness is noticeably smaller cargo capacity than many of its rivals. 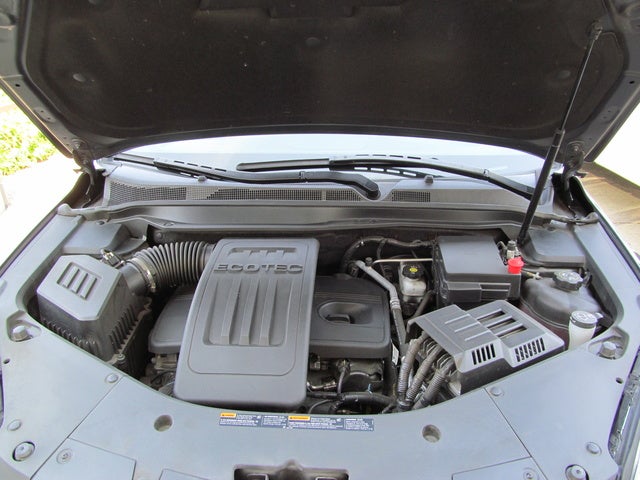 A 2.4-liter inline four-cylinder engine (I4) is standard across the entire 2011 Equinox lineup. Mated with the standard six-speed auto-manual transmission with brake hill holder, the I4 will put out 182 hp at 6,000 rpm and 172 lb-ft of torque at 4,900 rpm. Only 1,500 pounds of trailer maxes out this mini-mill’s abilities, but gas mileage is estimated at a respectable 22/32 mpg in FWD trims and 20/29 for AWD versions with all-but-obligatory variable valve timing.

For those in need of a bit more pep, an E85 ethanol-fuel-capable 3.0-liter V6 powerplant is available for the LT1, LT2, and LTZ trims. Again with the six-speed auto-manual transmission, the V6 will throw down 264 hp at 6,900 rpm and 222 lb-ft of torque at 5,100 rpm. This amped-up drivetrain increases the Equinox’s towing capacity to 3,500 pounds with the optional tow package selected, while fuel efficiency drops significantly to 17/25 in FWD versions and 17/24 in AWD trims. Additionally, for those Equinox trims sporting AWD, whether with the I4 or V6, a mechanical, center-mounted limited-slip differential ensures power to all four wheels all the time.

Though neither engine seems to inspire handstands and fireworks from reviewers, they’re both described as providing at least acceptable performance for everyday driving. The I4 is found to be adequate from a stop and gets from 0-60 in 8.7 seconds (in FWD trims), but several reviews mention a struggle when merging and passing on the highway. The V6 is described as obviously peppier, but still nothing to write home about, with the pre-2010 3.6-liter V6 mill noted by a few reviews as having had significantly better low-end pull than does the present V6. The six-speed auto-manual transmission is acknowledged by a majority of reviewers as responsive with the I4 powertrain, but a bit tardy on downshifts when paired with the available V6 engine. Reviewers also note that both engines can be a tad raucous under heavy revs, but each quiets down nicely at highway speeds.

The surprisingly good ride quality in the 2011 Equinox depends on its four-wheel independent suspension with trusty MacPherson front struts. Front and rear stabilizer bars complement a multi-link rear suspension and standard 17-inch tires to keep bumps at a minimum. Little difference in ride quality is noticed by reviewers between the 17-inch alloy wheels on I4-equipped trims and the 18-inch wheels accompanying V6-powered versions. No data is available for ride and handling characteristics if the LTZ’s available 19-inch wheels are selected, though as a rule, the larger the tires, the harsher the ride.

Reviewers describe the electric power steering system standard with I4-equipped trims as providing a vague feel, at best, while the hydraulic system accompanying the V6 powerplant isn’t judged to be a whole lot better. Cornering, however, is noted by reviewers as surprisingly stable for this type of vehicle, with little body lean or nose plow. Brakes in the 2011 Equinox are described as smooth and powerful, with no noticeable pedal sponginess. Reviewers are disappointed, though, at the huge turning radius of this smallish ‘Ute, which will make maneuvering in tight spaces a challenge.

Options include a trailer towing package for V6-equipped trims, while many of the standard features found on the higher trims become available as options on the lower trim levels. Only Bluetooth communications technology and tinted glass are available for the LS, however. The LT1, LT2, and LTZ, on the other hand, can be delivered with available touch-screen DVD navigation, 18-inch chrome-clad wheels, rear-seat DVD entertainment with dual seatback-mounted 8-inch screens, a power sunroof, and a power liftgate, while 19-inch chrome-clad wheels are optional with the V6-packing LTZ.

Quiet and well-appointed summarize the typical reviews of the 2011 Equinox cabin. Gauges and controls are described as easy to read and, for the most part, to reach, and seats are comfortable, with rear legroom enhanced immeasurably by the MultiFlex sliding second-row seating. Some less-than-appropriate plastics and interior workmanship, however, are noted by several reviewers, while tall front and rear headrests make for chancy visibility to the rear.

The National Highway Traffic Safety Administration (NHTSA) gave the 2010 Equinox five stars in front, side, and rear side impact tests, and four stars for rollover protection with both FWD and AWD Equinox trims. Additionally, the Insurance Institute for Highway Safety (IIHS) gives the 2011 Equinox its highest rating of Good across the test spectrum. As a matter of fact, the IIHS is so impressed with the Equinox’s safety attributes that it has once again designated this snappy crossover a Top Safety Pick for 2011.

Some needlessly cheap interior materials and a number of quality-control issues top the list of owner complaints with the 2011 Chevrolet Equinox. Additionally, more than a few owners say they don’t get nearly the mileage advertised with either the I4 or the V6 engine. And finally, owners are a bit disappointed with transmission glitches and the unavailability of either a universal remote garage door opener or a power-adjustable front passenger seat.

Positives for the 2011 Equinox, however, are numerous in the eyes of most owners, and virtually all mention, first of all, its slick styling. Added to that are owner plaudits for both ride and seat comfort, roominess, and those highly touted MultiFlex sliding rear seats. There are, as well, a few owners who do mention positive fuel economy results with the Equinox, perhaps due to more conservative driving habits. Finally, many owners give kudos for two reasonably potent engines, while this capable CUV leaves most owners feeling that the outlay for delivery was money well spent.

What's your take on the 2011 Chevrolet Equinox?

Forktzar Trouble from day one! Burns through oil like a house on fire. Sightlines are poor. Would never buy another.

Kenneth I agree with Forktzar 100%. Eats oil like it's starving. Can't see out of this car to the sides or rear worth a damn. I inherited this vehicle from my in-laws who no longer drive. I am so glad I didn't buy this piece of crap. Worst vehicle I have ever driven as far as visibility goes. Would NEVER buy one of these.

Users ranked 2011 Chevrolet Equinox against other cars which they drove/owned. Each ranking was based on 9 categories. Here is the summary of top rankings.

Have you driven a 2011 Chevrolet Equinox?
Rank This Car

My 2011 Equinox has only 88,000 miles and for years I have had a noise and bad shifting which I informed the dealer about. They said it was normal. Well this NORMAL problem turned into a Real expensiv...

How Can I Fix My Radio

Hi i have a 2011 Chevy Equinox and my radio not working what happen was i Jump start my car and at first I put the jumper cables on wrong and it sparked and started smoking a little and them i put ...

How Can I Fix My Radio

Hi i have a 2011 Chevy Equinox and my radio not working what happen was i Jump start my car and at first I put the jumper cables on wrong and it sparked and started smoking a little and them i put ...

What Is The Plus And Minus Sign Button On The Left Side Of The Gearshift Fo...

I have looked in my book and can't find anything about this.

Why Is It Saying Overheating?

2011 Chevy Equinox yesterday the dash read "a/c shut off due to high engine temp. The temp gauge read cold like it was not even running. It is not driving different ,no smoke heat work, not leakin...