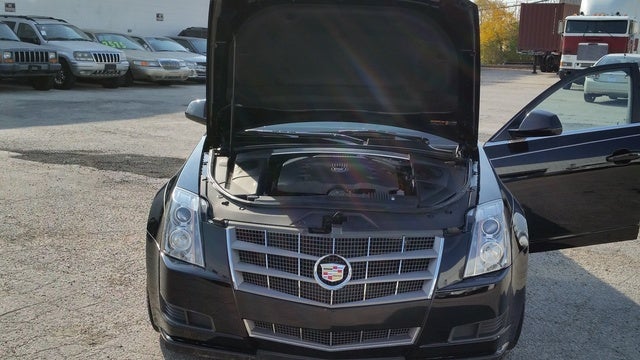 The 2011 Cadillac CTS stands out from the crowd with crisp styling, refined driving dynamics and competitive pricing.

Some questionable ergonomics, a few cheap details and an underwhelming base engine hold the 2011 CTS back from true greatness.

Stylish and well-engineered, the 2011 Cadillac CTS is aggressively priced and supported by a strong warranty and an excellent dealer network. With truly eye-catching sheet metal and classy detailing, the 2011 CTS shows how far Cadillac has come since the days of the Brougham. Luxury car buyers who might never have considered a domestic product will find the CTS a worthy competitor to established European entries from BMW and Audi.

The CTS represents Cadillac in the hotly contested "near-luxury" market. Consisting of sporty midsize sedans priced under $50,000, this segment has long been dominated by the big players from Europe. Still fresh from its 2008 introduction, the second-generation CTS gets a few minor changes for 2011 (including redesigned side louvers) to help keep it competitive.

This year Cadillac offers the CTS in both regular sedan and Sport Wagon body styles. Both variants ride on GM's so-called Sigma II platform, a modern rear-wheel-drive architecture. With dimensions that fit neatly into the middle of the pack, the 2011 CTS strikes an excellent balance between comfort and performance.

Styling-wise the 2011 CTS certainly cuts a dashing figure, all angles and creases. Jewel-like xenon headlamps, LED taillights and a mesh grille show that GM is finally getting the details right. With a bewildering array of trim levels (including the new CTS Coupe model, discussed separately) there's a CTS for nearly every pocketbook. 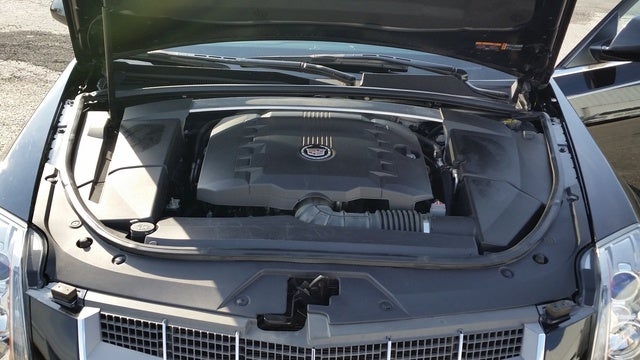 The 2011 CTS benefits from GM’s most advanced drivetrain technology. Base models are powered by an all-aluminum 3.0-liter V6 motor that features variable valve timing and produces a healthy 270 hp. While powerful at the top end, this high-revving mill makes just 223 lb-ft of torque. This decided lack of twist can make the weighty Caddy feel a bit slow off the line. Despite its slight torque deficit, the base V6 goes about its business very smoothly and makes pleasant noises.

The base motor can be combined with either a six-speed manual transmission (refined for 2011 with a new clutch and smoother action) or a conventional automatic, also with six cogs. While the stick shift's newly lightened touch still can't compete with the best of the Continent, the CTS' excellent 6L50 automatic is so good that BMW actually installs it in its own cars. Though the chassis was designed with rear-wheel-drive operation in mind, all CTS trims are also available with all-wheel drive. The innovative Borg Warner drive system can divert 100% of the engine’s torque to either end of the car, providing excellent traction for those who live in snowy climates.

The 2011 CTS's optional engine, available in Premium and Performance trims, is a 3.6-liter V6 that features direct gasoline injection. The upgraded motor makes 304 hp and, more importantly, 273 lb-ft of torque. This extra grunt pays enormous dividends in acceleration, and the larger six’s direct injection system provides excellent throttle response. Unfortunately, the larger six comes only with the automatic gearbox, though it can still be optioned with the high-tech AWD system.

Given the brand's reputation for building wallowing luxo-barges, handling is one area where you might not expect a Cadillac to excel. Yet the 2011 CTS had its suspension honed on Germany’s legendary Nurburgring racetrack, home territory for BMW engineers. While they haven’t quite managed to outdo the best of Europe, the folks at Cadillac did endow the CTS with some of the best handling ever seen in an American car.

The CTS's four-wheel independent suspension consists of control arms up front and a multi-link setup out back. This sophisticated arrangement, combined with near-50/50 weight distribution, allows the 2011 CTS to be thrown aggressively through tight corners. The speed-sensitive power steering is light but accurate, and turn-in is crisp. Handling limits are high, and the car breaks away smoothly and predictably. While the CTS lacks the almost indefinable precision handling of a BMW (it's just a bit too isolated in terms of feedback) it really does corner better than most of the competition. 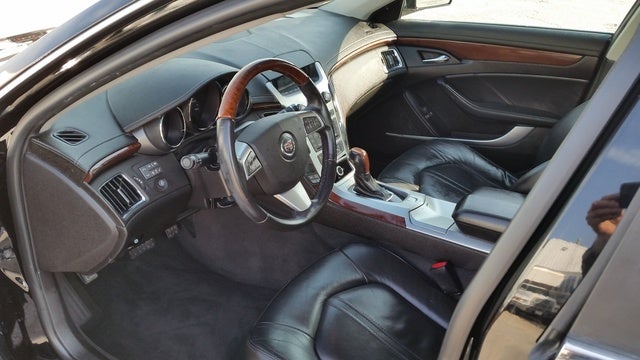 The 2011 CTS has plenty of space within its luxurious interior. The sedan is generously sized for four, and Sport Wagons feature a large, easily accessible cargo bay with 58 cubic feet of space. The wagon also offers an innovative cargo management system that allows parcels to be stored beneath the load floor. It's refreshing to see an American manufacturer re-enter the realm of station wagons, as they provide an excellent alternative to bulky SUVs. The 2011 CTS Sport Wagon with AWD will likely do everything that the company's larger SRX crossover will, yet the wagon costs less, looks sharp and drives even better.

Though eye-catching, the 2011 CTS' interior is somewhat a triumph of form over function. The sweep of the center console forces the HVAC vents to the side and focuses the eye on a single center screen that displays both radio and climate control information, not the most ergonomic arrangement. Likewise the separation of driver and passenger climate controls makes for a cocoon-like appearance, but might prove tricky for newcomers to operate. While the ancillary controls could stand some improvement, the relationship between the seat, the steering-wheel and the pedals is excellent and encourages spirited driving.

GM has long struggled with interior quality, but the razor-sharp detailing and expensive-looking materials of the 2011 CTS absolve many of the General’s past sins. Plastics are the equal of the foreign competition, and panel gaps are nearly perfect. The supple leather seats and polished wood trim lend an upscale air, as does the newly available heated steering wheel. The interior is sufficiently isolated from road and wind noise, though Cadillac (like most everyone) still trails Lexus in this regard.

Cadillac has made safety a priority for the 2011 CTS. With six airbags and a host of standard electronic driver aids, the CTS fares well in terms of both active and passive safety. The addition of OnStar automatic crash response adds substantial peace of mind. In the Insurance Institute for Highway Safey's rigorous offset crash test the second-generation CTS earned the top rating of Good. Side-impact test results were also in the top category, owing to the inclusion of standard side curtain airbags.

CTS owners are simply in love with their car's gorgeous looks, with many buyers saying that the clean, modern exterior styling was a major factor in their choosing the Cadillac. Similar praise was heaped on the CTS' sprightly driving dynamics, though one reviewer mentioned they preferred the softer ride of the older DeVille. While buyers of 3.6-liter CTSs are impressed by the car's performance, those who chose the base engine seemed to wish for more power.

GuruLFP5G I'm sure the Caddy is a good car , I am just not attracted to the styling , I like American styling, it is to foreign style for me !! It look too much like an insect with wheels , and styling means alot to me ! I like good and trunks ! The Caddy looks like a top with wheels ! Which is the way most cars look now !! Too radical, some have huge bodies and small wheels , they look like cartoon cars!! They do nothing for me !! And also most car enthusiasts agree with me!@

Users ranked 2011 Cadillac CTS against other cars which they drove/owned. Each ranking was based on 9 categories. Here is the summary of top rankings.

Have you driven a 2011 Cadillac CTS?
Rank This Car

How To Delete Previous Owners Phone Tags For Bluetooth?

I just purchased a preowned 2011 cts. I want to pair my phone to the cars Bluetooth and when I attempted it, it told me that the car had the maximum number of phones already paired (5). I tried to d...

Cadillac 2011 Cts: My Steering Wheel Is Locked And I Cannot Turn The Key T...

I tried to start my Cadillac CTS. The key goes in the ignition but will not turn to start the car. The steering wheel is locked.

oil pressure gauge floating constantly is this normal I have a 2011 CTS coupe 3.6

935 views with 5 answers (last answer about a year ago)

Guru3DDQT asked a 2011 Cadillac CTS 3.0L AWD General question about a year ago

2011 Cts Coupe Shaking When I Step On Brakes

after driving for awhile when I step on brakes car shakes. But only after I'm driving for a awhile. Is that a sign of rotor warp