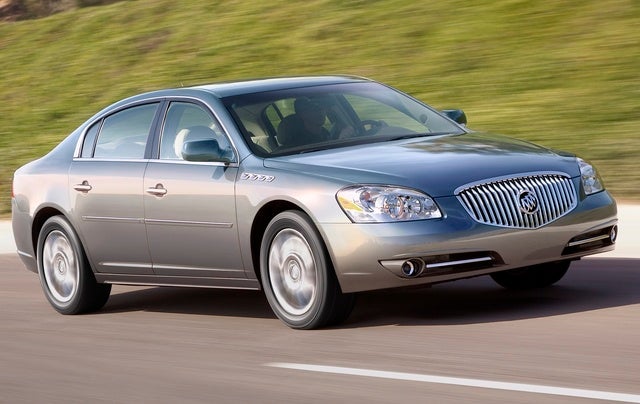 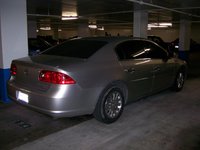 Lackluster styling, tepid powerplants, a lazy brake pedal, poor fuel economy, and less-than-inspired handling conspire to leave the 2011 Lucerne near the bottom of the pile.

Though it won’t win any prizes for its styling or its handling, the entry-level-luxury 2011 Buick Lucerne will provide a plush ride and a comfortable roomy cabin. This full-size five- or six-passenger sedan stands a notch below its Cadillac cousins in appeal and status, but could use a bit more styling pizzazz, maybe a few more bells and whistles, and a tad better fuel economy in both the V6 and V8 versions to become a leader in its class. Standard amenities, though adequate, don’t compare well with much of the competition, nor does overall refinement, and the Lucerne’s base price may be a touch steep for the value-conscious. For those who want a quiet, comfortable cruise, and for whom value is secondary, this sizeable sedan is right up their alley, and available six-passenger seating will make for a classy carpool experience. Additionally, 17 cubic feet of luggage capacity means plenty of space for laptops and briefcases.

The 2011 Lucerne is available in four trim levels, the base CX, lower-midlevel CXL, midlevel EXL, and high-end Super. The lower three trims pack a somewhat pokey V6, with the flagship Super boasting a more highway-friendly V8 powerplant and marginally sportier suspension. All trims carry a dated but nevertheless silky and reliable four-speed automatic transmission, and the entire lineup is front-wheel-drive (FWD) only. Rumor has it, however, that the Lucerne will be available in an all-wheel-drive (AWD) version at some point in the near future with, one would hope, a more economical six-speed automatic. (The Lucerne EXL trim level is sometimes referred to by Buick as the CXL Premium.)

Though touted as entry-level luxurious, the Lucerne will never get confused with a Lexus, Beemer, or Infiniti, nor even a Lincoln MKZ. Instead, the Ford Taurus, Chrysler 300, Hyundai Genesis, and the Toyota Avalon, all similarly priced and for the most part better endowed, are considered the Lucerne’s major competition. 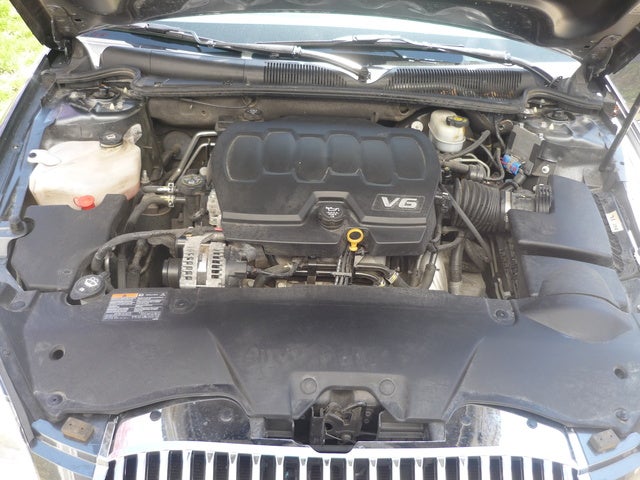 A 3.9-liter Flex Fuel V6 engine provides standard power for the 2011 Lucerne CX, CXL, and EXL trims. In combination with a standard four-speed automatic transmission, expect this hefty sedan to put down 227 hp at 5,700 rpm and 237 lb-ft of torque at 3,200 rpm. Variable valve timing keeps mileage at a livable but not jaw-dropping 17/24 mpg. Flex Fuel capability means the V6 can be filled with E85 ethanol fuel, as well as regular unleaded gasoline. Be advised, however, that mileage usually suffers when burning the E85 blend.

A semi-potent and considerably more budget-busting 4.6-liter V8 engine equips the Lucerne’s Super trim level, again with the standard four-speed automatic transmission. This matchup throws down 292 hp at 6,300 rpm and 288 lb-ft of torque at 4,500 rpm. However, the V8 has neither E85 capability nor variable valve timing, and with the less-than-efficient four-speed automatic, gets only an estimated 15/23 mpg burning recommended premium unleaded gasoline. One road test of the 4.6-liter V8 netted 7.7 seconds from 0-60, which trails most of the competition, especially the Chrysler 300.

Though reviewers are generally unimpressed with the lackadaisical V6, its V8 counterpart is noted to provide at least a modicum of highway panache. The four-speed automatic is described in a majority of reviews as smooth and steady with both powerplants, but not nearly as economical nor as versatile as the more modern six-speeds that equip much of the competition. Overall, reviewers find the Lucerne to be sub-par, power-wise, with the V8, of course, providing better highway performance, but at a price, both at the gas pump and in the showroom.

Plush and sedate, the 2011 Buick Lucerne is designed to pamper rather than excite. The three lower trims feature 17-inch alloy wheels, while the Super, as befitting its allegedly sportier status, boasts 18-inch chrome-plated aluminum wheels. The rubber on the road is complemented in the CX, CXL, and EXL by a self-leveling four-wheel independent suspension with MacPherson front struts, front and rear stabilizer bars, and a multi-link rear suspension. All this results in a smooth though somewhat ponderous ride on the highway, according to the majority of reviews, with a bit of bobbing and weaving around town. The Super trim, on the other hand, with its driver-adjustable active suspension system, is noted by many reviewers to be almost equal in ride comfort to the lower trims, with a bit more composed demeanor on the highway, as well as a modicum of stately comportment on lesser roads.

Handling characteristics are, unfortunately, not up to the standards of most of the competition, nor of the majority of reviewers. The Lucerne’s lower trims, sans the active suspension feature, demonstrate to many reviewers an unseemly body lean in tight corners, with a rather vague and over-boosted steering feel. While this may work fairly well in the city, it makes for a somewhat yawn-inducing highway cruise and a less-than-pleasant driving experience on twisty country roads. The Super, with its Magnetic Ride Control, provides a more confident steering feel with far less body lean, according to most reviewers, but still falls far short of being sporty. At least one reviewer still finds steering in the Super to be a tad over-friendly. A number of reviews also note that the extra-wide turning radius of the Lucerne means some tense moments in city traffic and crowded parking lots. Braking, meanwhile, is described by most reviewers as strong and sure, though several complain of a somewhat spongy feel in the pedal.

Options for the Lucerne CX include the Comfort and Convenience Package, containing a number of standard features found in the higher trim levels, as well as available six-passenger seating, which is also optional with the CXL and EXL trims. DVD navigation, a power sunroof, and remote engine start are optional for the CXL and EXL trims, with NavTraffic satellite traffic information and a three-month subscription added to the list of options for the EXL. The Super trim is unavailable with six-passenger seating, and, as well-equipped as it already is, offers only upgraded exterior paint choices to the list of optional equipment.

Reviewers find cabin opulence to be among the strong points of the 2011 Lucerne, with comfortable seating, large, easily readable gauges, and well-placed controls, as well as ample head- and legroom front and rear. Several reviews, however, note that a disconcerting amount of low-grade hard plastic detracts from cabin appeal, especially considering the somewhat hefty pricetag. Additionally, visibility to the side corners is restricted by extra-wide roof pillars. Back on the positive side, the Super trim’s extra leather and suede trim accents are especially well-received by most reviewers.

Passenger protection is not overlooked in the 2011 Lucerne, with four-wheel ABS, emergency braking assist and electronic brakeforce distribution, traction control, and new-for-2011 standard stability control topping the list of safety features. Additionally, this big sedan features standard front side-mounted airbags, front and rear head airbags, daytime running lights, front fog/driving lights, cornering headlights, OnStar emergency communications systems, and a post-collision safety system standard across the lineup. Furthermore, the EXL and Super add rear parking sensors, turn-signal-integrated mirrors, and a remote anti-theft alarm to the list of standard safety equipment, all of which are optional for the CXL trim. The Super, meantime, also adds such extra standard safety features as blind-spot warning and a lane-departure alarm to the mix, which are also optional for the EXL trim.

The National Highway Traffic Safety Administration (NHTSA) gives the 2010 Lucerne its best five-star rating for front impact protection, with no side-impact rating available. Rear side passenger protection, meantime, is rated by the NHTSA at a second-best four stars, while five stars are again given for rollover protection. In addition, the Insurance Institute for Highway Safety (IIHS) gives the 2011 Lucerne its highest rating of Good in front-impact testing and a second-best rating of Average for side-impact tests. No rollover testing was performed by the IIHS.

While virtually all owners enjoy the 2011 Lucerne’s plush ride, some issues with visibility, cabin ambiance, and noise nevertheless plague more than a few. Overall value also seems to be in question with a few owners, as well, though others are reasonably comfortable with pricing and features. Finally, poor fuel economy with the V6-equipped trims disappoints a number of owners, while the Lucerne’s somewhat sloppy handling characteristics don’t win much in the way of kudos, either.

Praises are given, however, for a comfortable cabin, cavernous trunk, attractive if not exactly memorable styling, and the reliability of the four-speed automatic transmission. Additionally, more than a few owners laud the performance (if not the gas mileage) of the Super’s V8 powerplant. Finally, owners appreciate the fact that stability control is finally standard across the Lucerne lineup.

Andrew I owned a 2010 Lucerne CX and presently own a 2011Lucerne CXL. I think the 2011 Lucerne is a great car. I have over 66,000 miles on my CXL. On cruise at 70 mph I get 30 mpg. I have driven many cars both domestic and foreign. Car critics can nit pick any car to death if they so desire, and they choose to nit pick the Buick Lucerne. If I were were wealthy I would own more than just one 2011 Lucerne. I think that over time the Lucerne will be vindicated.

TheHorror Can you actually address the criticism pointed at the Lucerne. If the car was so great, it would presumably be easy to defend... The fact that you just dismiss multiple sources, pointing to the same issues, indicates you are incapable of doing so.

Have you driven a 2011 Buick Lucerne?
Rank This Car

13 views with 1 answer (last answer about a week ago)

Why My Car Wont Start

I took my car to the shop and they put on a new waterpump now they cant get my car started.

How To Install A Buick Lucerne Cxl Frony Grill

What Is The Difference In A Lucerne Cx,cxl,cxl3,supreame

Seat doesn't seen to raise up as it once did.